Who are you? Manchester statues that don’t look themselves

THERE was a trend for abstract sculpture in the sixties. I liked it, even though, due to my age, I could only enjoy the works as their upkeep faded, and slowly but surely the notion of representative sculpture re-emerged.

This new work was seen as popularist and thus good, a corrective to the statues of forgotten local worthies and included footballers, comedians and others - the most famous being the statue of Eric Morecambe in Morecambe.

Most of the new stuff doesn’t look like the person it’s supposed to... some don't even look human

Some abstract work was still completed, such as Kan Yasuda’s 1996 Touchstone, which is just about the best piece of public art in the city centre from that year to now. The thing is, while it looks like a stone it doesn’t have to look like a particular stone. The new representational sculpture has to look exactly like a particular person - and this is the problem.

Most of the new stuff doesn’t look like the person it’s supposed to represent, or only looks a bit like them. It might occasionally look like that person’s brother or sister, or mother or father, but mostly it looks like no relation at all. Sometimes it doesn’t look properly human, such as the one of Michael Jackson in the National Football Museum. Perhaps, like that well-balanced prophet of doom, David Icke, some of the sculptors can see inside the outer person to the inner alien reptile within. Something like that.

Strangely, the Victorians and the Edwardians seemed better at this sort of thing. Look at the bronze of Richard Cobden in St Ann’s Square or Robert Peel, Queen Vic and the Duke of Wellington in Piccadilly and then look at the early photographs, or portraits, of the same people. They are spot on in terms of representation. Maybe the sculptors were better trained. Or more fastidious. Or simply better in this sort of work.

Today’s representative sculptors seem good at capturing the hair, or a hat, or a pair of glasses or some other trademark feature of their target figure and seem to think that is enough visual short-hand to fool us into thinking the facial features are an exact replica. We’re not fooled.

We say representative statues have had their day. We don’t need anymore unless we do them for a laugh.

Anyway, following the outcry of the proposed Victoria Wood statue in Bury, here’s our list of statues of people who don’t look quite like themselves, starting with Vicky. 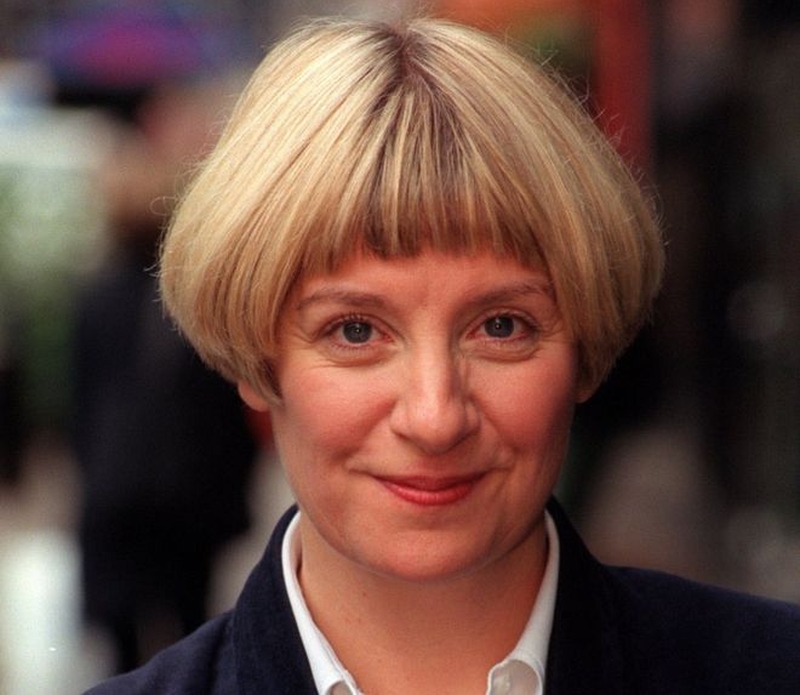 Ibbeson is responsible for the Eric Morecambe statue on the prom of the Lancashire seaside resort in 1999, so should by now know better. His model (maquette) of comedian and writer Victoria Wood for Bury town centre, is, one might say, appropriately funny. She’d laugh her head off. The work looks like a person of indefinable sex, with the upturned outer leaves of a garden lettuce on her head – classic case of trying to excuse a failure in representational sculpture by focusing on one very recognisable feature. Others have thought it more resembles eighties footballer Peter Beardsley, or Tim Burgess of The Charlatans, or even artist Grayson Perry in full drag. Sadly, it doesn’t look like the popular UK entertainment figure from Bury, who died in 2016. Ibbeson has been stung by the criticism saying, forget the model, the finished work will look very much like Wood. Perhaps even now he is beavering away in his workshop trying to really catch a likeness of Victoria. 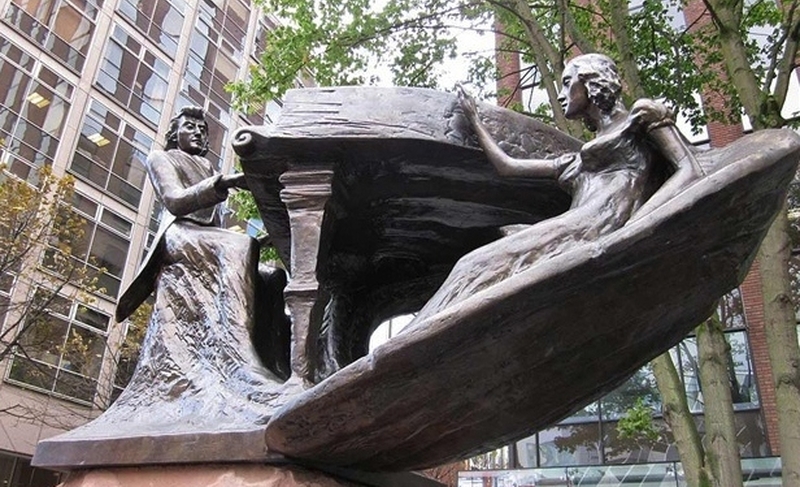 Putting aside the fact Chopin only visited Manchester once (does that mean we should put up statues of everybody who visited once?), this work marks the links between Poland and Manchester. It was unveiled in 2009 by the Foreign Minister of Poland. Unfortunately, poor old Chopin looks more like a cartoon in a children’s book of fairy tales with scrawny, badly moulded features. He might be the poor but kindly cobbler. Meanwhile his mistress and muse, Baroness Aurore Lucile Dupon, lolling at his feet on the other side of the work looks in pain, her arm is so thin it might blow off. Even Chopin’s piano looks annoyed.

The statues of Sir Matt Busby and ‘the Trinity’ of Law, Best and Charlton at Old Trafford look more or less like who they are meant to look like. The statue of Sir Alex looks nothing much like him; the face is too full, the neck too full, even the hair doesn’t look right. The ex-United boss resembles the statue of the WWII commando in Liverpool. Maybe the sculptor didn’t really follow football and found another Sir Alex to sculpt. 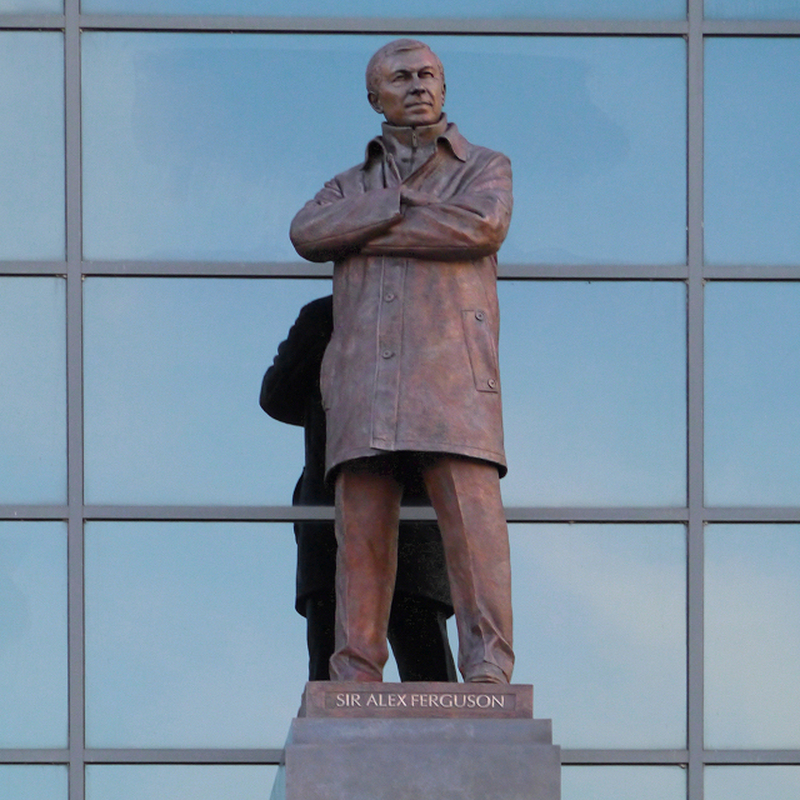 Placed between University buildings and Manchester's Gay Village, the location of this bronze statue of the great mathematician, computer scientist and war hero is said to represent the two sides of Turing's life. There is some confusion over the motto in relief on the bench: IEKYF RQMSI ADXUO KVKZC GUBJ. Some say that the motto reads 'Founder of Computer Science', as it would appear if encoded by an Enigma machine - the WWII German encryption device Turing helped decipher. However, some clever bod pointed out soon after its unveiling that Enigma could not encode a letter as itself, so the motto could not be so... or something like that. Equally confusing is the sculptor's decision to give Turing's statue no discernable features. It is just about the plainest, most generic looking man sitting down in a suit and tie you could ever hope to see. However, he is holding an apple (or is that a cricket ball?), which is some clue at least. 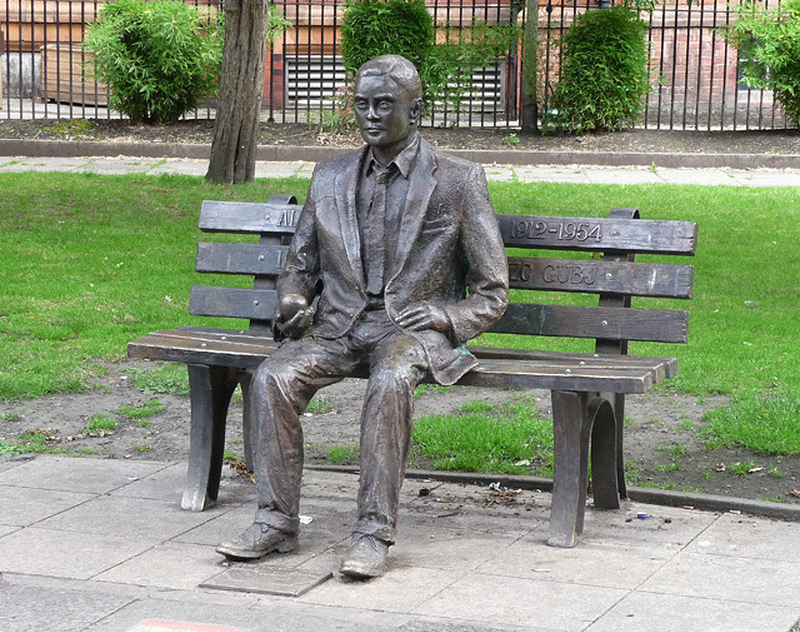 We don’t know who the original artist was as the statue was a mass production propaganda number, from the mid-20th century, to impress/suppress Ukrainians with Soviet power. We do know it came to us during the 2017 Manchester International Festival, through the efforts of the artist Phil Collins (who'd probably be worried, if someone did a statue of him, that the artist might get confused and produce a statue of the other Phil Collins). Engels is cast in concrete and looks a bit blurred. He also looks as though the artist decided he needed an ethnic rearrangement as the cheekbones and eyes make the statue look Tartar or Mongolian. Not that its unlikeness matters, as the Communist, who lived for 22 years in Manchester, stands alone in Tony Wilson Place. As one young man from the Autotrader office next door recently commented, "most people think it's Tony anyway". 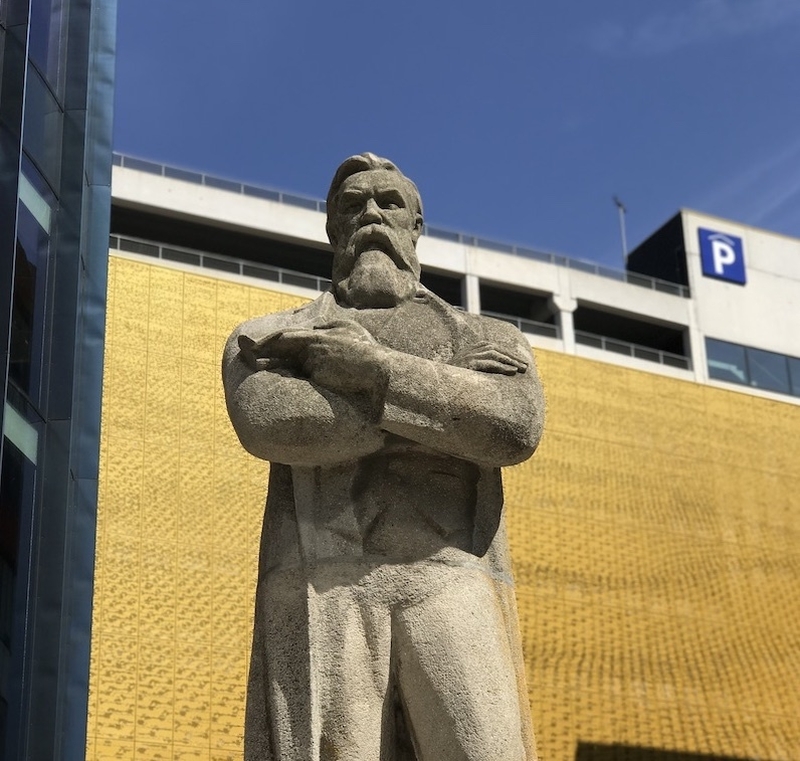 This was meant to be a serious statue erected outside Fulham's football stadium by then owner Mohamed Al-Fayed (famous as the one-time owner of Harrods) in a typical billionaire ego-cavalcade of utter nonsense. Michael Jackson had no link to the club aside that he'd been to a game with Al-Fayed in 1999. The fans were both furious and amused because the statue is utterly rubbish, looking like one of those knock-off religious figures made from plastic and sold outside Italian churches. The plaster and resin humanoid figure bears some resemblance to a melted wellington boot at best and is the apogee of garishness. When Al-Fayed sold the club the statue was removed and sent to Manchester to be put on display at the NFM. He would later blame Fulham's subsequent relegation on the removal of the statue. If you’ve never been to the National Football Museum this monstrosity is worth the entry ticket alone. It is testimony to the megalomania of many a football club owner of the modern era. 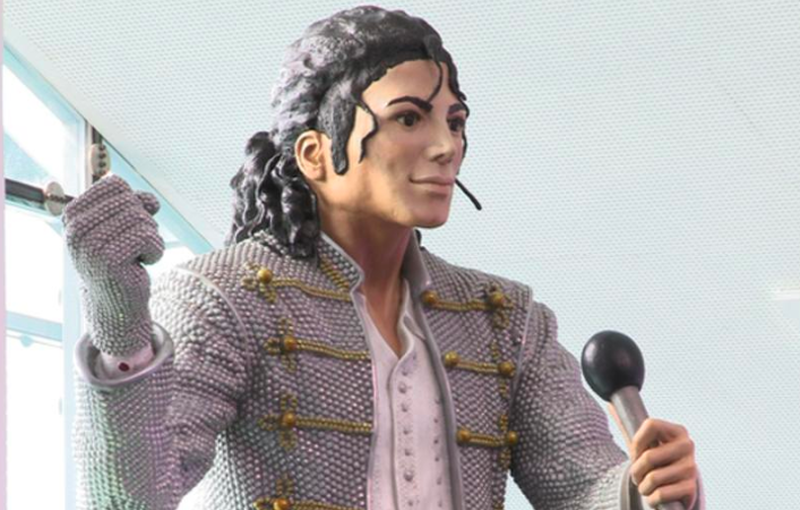 It’s painful to criticise this work because Manchester desperately needed a female figure as some sort of balance to all its male statues. And what better figure than Emmeline Pankhurst, the mother of the Suffragettes? The opening ceremony was a moving and powerful event. So in terms of symbolism and what this statue represents, the on-going struggle of women for equality, there is nothing wrong with the Hazel Reeves’ bronze. Yet there is a harshness, a sharpness which scarcely looks like the pioneering figure at all. The hat sort of gets us to Pankhurst, but this work still, in its face, looks like a relation of Emmeline, maybe, and not the woman herself. And one that does...

Now this is more like it, this is spot on. Timperley comedian Chris Sievey was not known for his real head at all. In the street, he was only recognised by close friends, yet he was recognisable across the country. This was because he disguised his own fine features under a paper mache bulb with a painted on face, the size and shape of a Belisha beacon flashing at a zebra crossing. Sievey died young in 2010 and was famous for putting the subdued suburb of Timperley into national consciousness through his comedic covers of classic songs renamed as ‘Timperley Sunset’, ‘Surfin’ Timperley’ and ‘Anarchy in Timperley’. The £60,000 to pay for the bronze was raised by fans. The likeness is exact so no photo is needed of the real Frank. If only all faces were as uncomplicated as this maybe sculptors could get them right.