People love whinging. Especially about change. New buildings get it in the neck all the time. Sometimes this is merited, often it is not. On this page we look at some fabulous recent buildings and refurbishments. We have six examples from the central areas, five are superb, one is good, but is also an object lesson about paying heed to the context of a building's location.

There is no order of precedence among the first five. They are all very different in shape, scale and function and they are all great additions to the city scene. 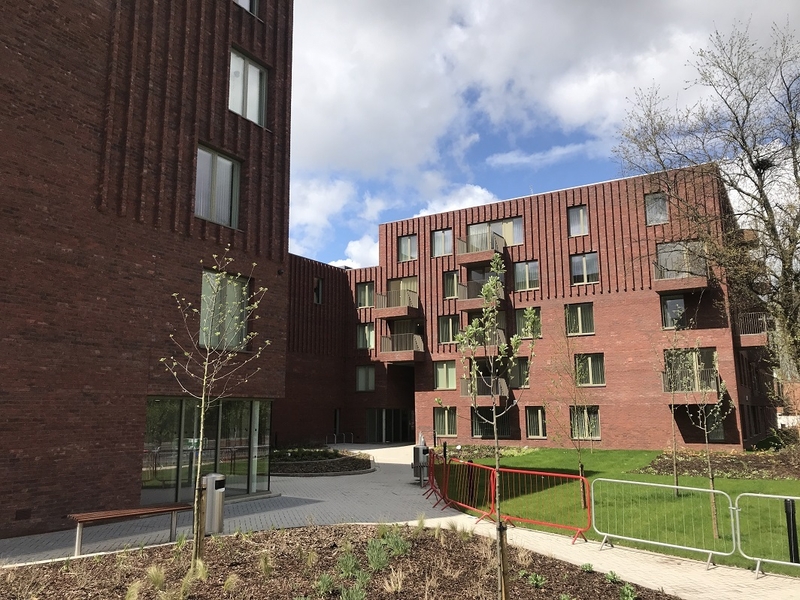 This PRS (private rented sector) housing development was for housing association One Manchester, and is made up of 85 apartments and 20 townhouses. It's excellent. If you want affordable housing in the inner cities and suburbs to have good density, tick the environmentally friendly boxes, but also be handsome and have real street presence then this Mecanoo scheme is right on the button.

The Aaben is a magnificently controlled piece of work, built from sturdy red brick, with articulation from the second floor to the roofline, and chunky solid massing and proportions which puts to shame the weak and cheap looking nineties work on the other side of Leaf Street.

The depth and floor surface of balconies gives the game away about the quality of the work here. At last on residential developments of this nature the balconies are meaningful, not apologies of things. About 80% of Manchester's balconies on its new buildings are not worth the effort.

Next door to The Aaben is the 1940s Bentley House estate aka 'The Redbricks', and it's curious that the balconies on those old examples of social housing seem to have similar scale balconies. Did they influence architects Mecanoo? If so, it's good to see such generosity of scale making a return.

The name by the way, The Aaben, refers to a privately run arthouse cinema that was well-known and well-loved until its closure in 1990. Mecanoo, who also designed HOME arts centre down the road, have delivered at Aaben, homes that are worthy of the name home. This 2018 development should be the model for future city affordable housing in its sturdiness and good looks. 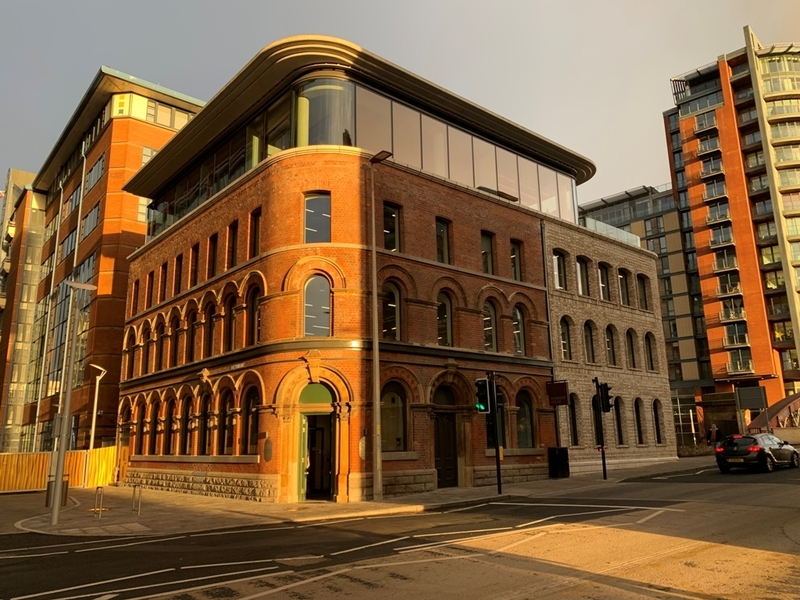 This is a lovely thing. The 1890s' Royal Veteran Tavern, close to the River Irwell, in the New Bailey area of Salford, was a tumble down wreck. Now it is a revitalised piece of genius with a perfectly matched partner; a modestly proportioned head-turner on the way into Salford from Manchester.

As Alford Hall Monaghan Morris (AHMM) architects say: 'The footprint of the former Royal Veteran’s Tavern building occupies roughly half the site, and a new build addition, conceived as a mirror image of the old tavern, doubles this footprint to the south. The street facing facades of the existing building have been retained and restored, but the interior, which was failing structurally, has been removed. The project provides over 1400 sqm of office space with a proposed food retailer and riverside terrace at ground floor. The third floor of Riverside House is set back, allowing for a generous external terrace, which will serve as an informal function space and lunchtime amenity for the third floor tenants.' 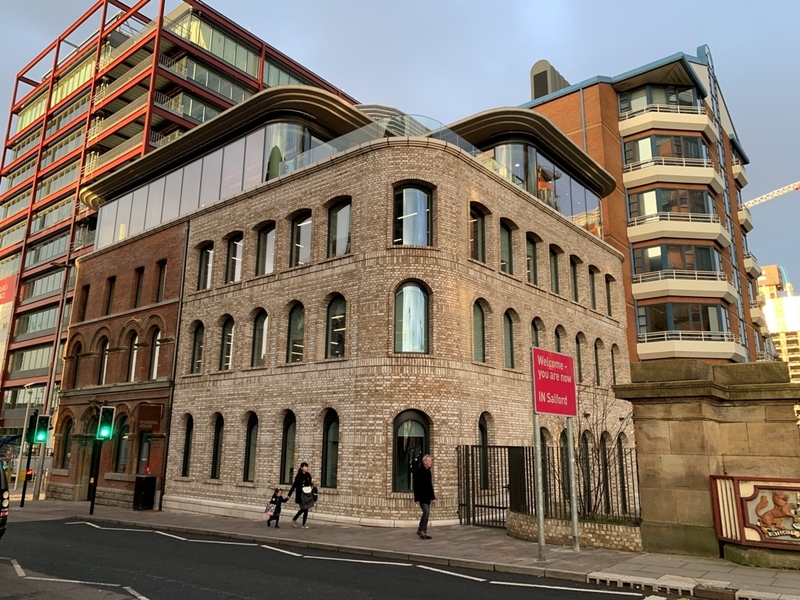 I say, the design takes a handsome Victorian property and mixes and matches materials to superb effect to create a harmonious whole. The swoop and swerve of the building is a delight, the fenestration and the oatmeal brick colour on the modern eastern part of the building is particularly striking. Riverside House is an excellent example of subtle, and confident architecture that complements its surroundings and enhances the city scene. It is charm personified and of a rare scale in a city that often errs on the side of large. Too large. Ten out of ten. 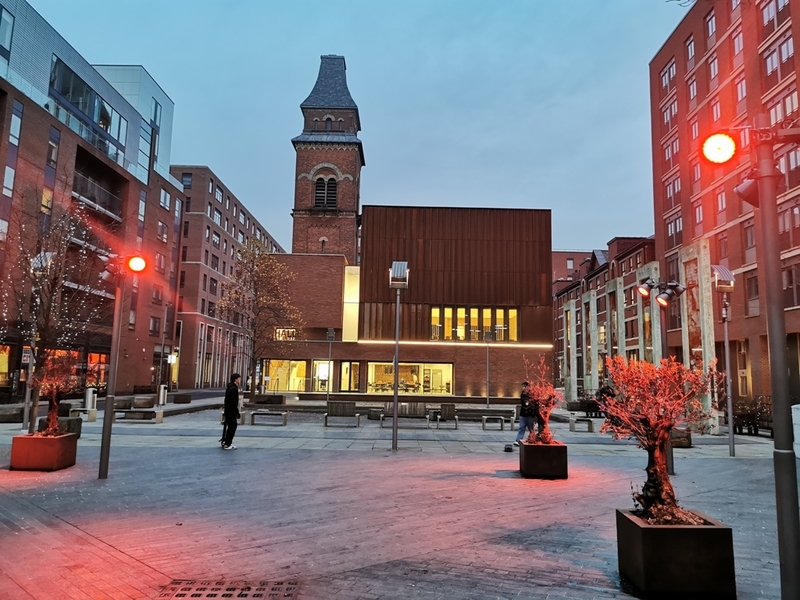 I've conducted recent tours of this beautiful restoration of St Peter's Church in Ancoats, now enhanced by Stephenson Studios' glorious extension. One guest expressed a common sentiment after the last trip. She contacted me by email and wrote: "This is how we should approach building in cities, with careful consideration of the context of the surrounding streets, but also with regard to the story of the city and the people within which the building stands. This extension works on every level if that approach is to be taken."

She's right. As I have written here, this building completes Cutting Room Square, indeed, this part of Ancoats. The success lies in its subtlety, in the use of materials, in the matching of the brick to that of the older structure and the way the extension defers to the church behind while retaining its own personality.

The main Victoria Wood rehearsal room is a delight, double-height with a window cut into it. The facade of this element is in corten steel which can be brutal but seems totally apt here, given the tough industrial past of Ancoats. Back inside a spark of brilliance is struck by giving the stairs up to the rehearsal spaces a glass ceiling aligned with the tower of the church. This adds drama while reinforcing the connection between the extension and the original building.

Roger Stephenson of Stephenson Studios told Confidential: “It was important we touched the old church lightly. The only contact is with glass and we have left plenty of airspace." That lightness of touch has reaped huge rewards in a design triumph. 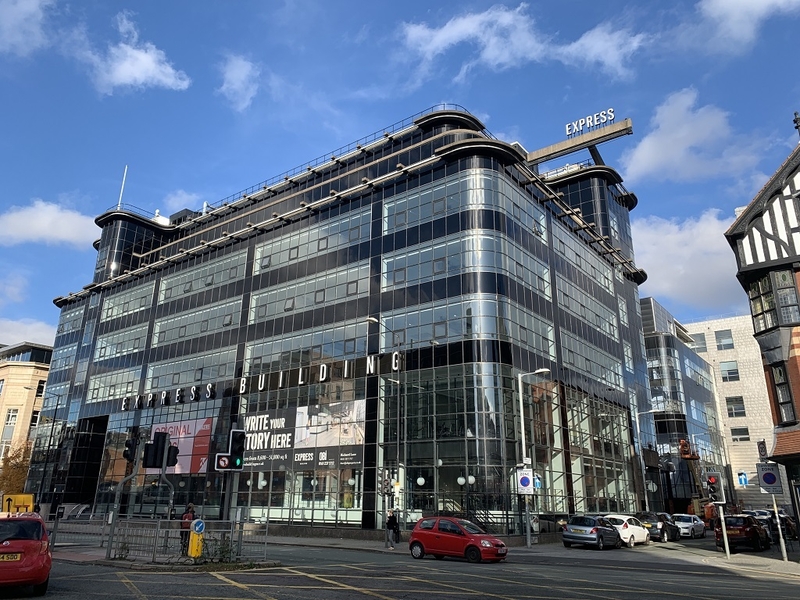 Recently I wrote this about the Express Building. I make no apologies for repeating it.

'The Daily Express building here was Owen Williams' masterpiece. In some respects, at eighty years of age, the Grade II* listed beauty looks more modern than anything designed since in Manchester.

'This 1939 building is all about elegance and verve. There’s a beautiful swish and swoosh to the structure with graceful curves at the corners. Externally it’s pin-sharp, glamorous even. The black glass layers between the clear glass make it look like it's off to a black-tie event as the star guest.

'The top of the building recedes in tiers, adding depth and variety, which is enhanced by an almost fortress-like turret on the north west. At the other end, down George Leigh Street, a racy piece of concrete juts out with no other purpose than to act as an elevated signboard, with an illuminated ‘Express’ (formerly it read ‘Daily Express’, of course). It echoes a classic cinema motif of the 1930s, when movie-houses bedecked themselves in neon, at a time when neon was still fresh to the world.'

Ben Adams Architects have done a lovely job bringing the building back to life and making its style of streamline moderne thrill Great Ancoats Street once again. A light touch was needed and that is evident in the refurbishment. Nobody who has been inside and seen the mighty tree-like concrete columns will forget them in a hurry. The interior decor of the company occupying the ground floor and basement is too garish, but the reborn Express Building stands as the totemic sentinel for Ancoats' rising status as the place to be in Manchester city centre. 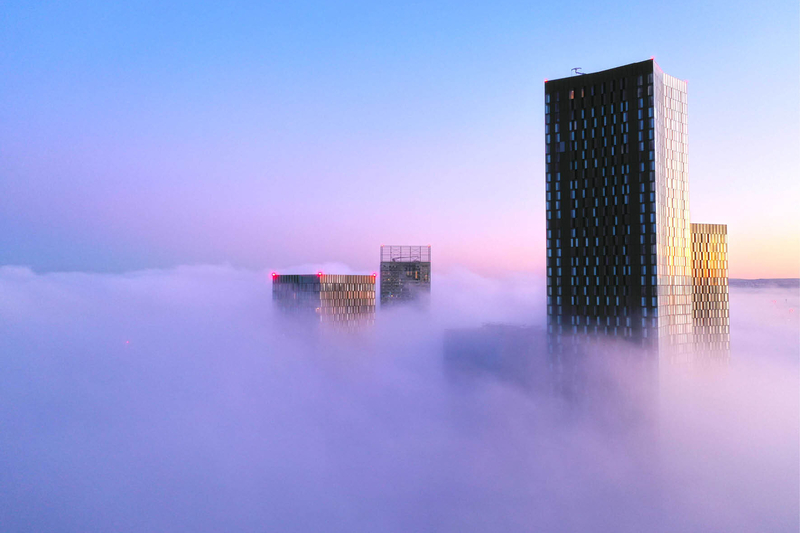 There's a mood amongst some in the city to dislike tall towers for various reasons, some environmental, most political. It can all get a bit chip on the shoulder and holier than thou. It can all get boring. I bloody love tall buildings, I love the optimism of them, their engineering verve - except when I'm wearing a hat on a windy day and walking past. Of course, I try to only love tall buildings if they are good and these at Deansgate Square are very very good.

There are four of them, all identical except in height, variously for rent or sale, and comprising more than 1,500 apartments, with gyms, receptions, swimming and tennis, all the usual guff, aside from the tennis, which is a new one. The tallest tower is a majestic 201m (659ft) and the smallest is 122m (400ft). A prominent Manchester architect once said to me, "The most important thing about a tall building is the way it connects with the ground." Well, Deansgate Square does all right there, but seriously that is not the most important thing about tall buildings. 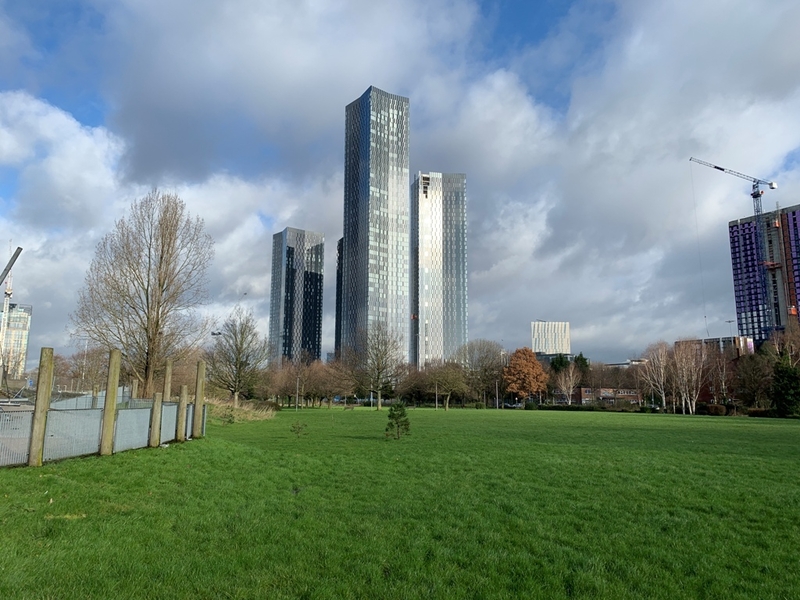 Deansgate Square's true magic is revealed from a distance, not in the way they touch the ground. Their noble simplicity is sculptural. They are better for that simplicity, cleverly emphasised by the pleat running down the centre of each side of each building. Catch the towers in certain atmospheric conditions or at certain times of the day and the effect is wonderful as the light splits vertically down the buildings. I don't care what they are like to live in, I just love the way they animate the Manchester skyline.

The rules about context and buildings paying heed to their surroundings don't apply here and nor should they. Deansgate Square is built on a surface car park bordering the Mancunian Way, that was an iron foundry years before, hence it is a perfect location for skyscrapers. The tallest building of the team is the fifth tallest building in the UK. The other four are all in London, led by The Shard, which in comparison to Deansgate Square looks like some vulgar oligarch's tower in downtown Dubai. 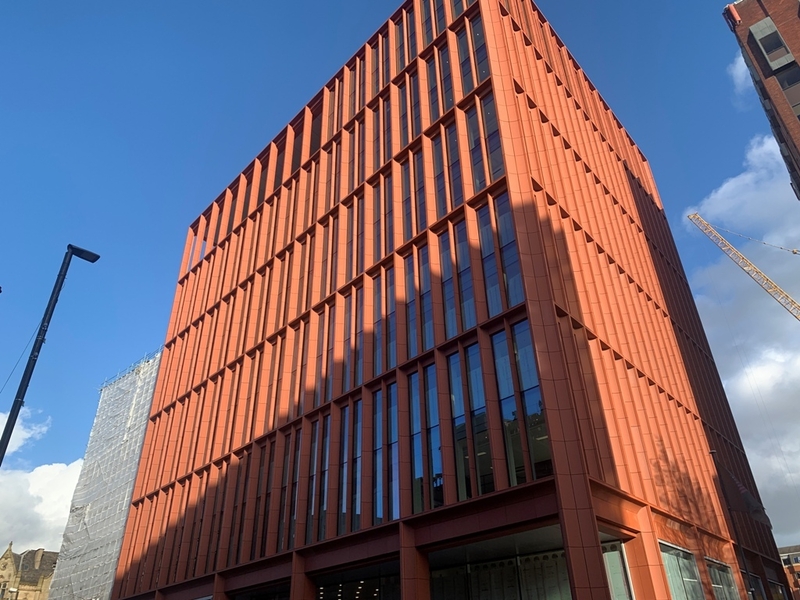 Listen, Glenn Howells Architects are good and this is in many ways a good building. It's strong, even bold, with big verticals, clear and clever fenestration and a rich russet red colour which is especially striking in bright sunlight. The confidence of the Howells practice is evident in One St Peter's Square too. The latter though, despite being much higher than Central Library on the other side of the square, defers to the older building and gives it room. It has manners.

Glenn Howells Architects seem to like building opposite libraries in Manchester but at One Two Five Deansgate they've got it all wrong. The shouty promo website describes the building as 'seriously confident eye-candy' which is both yack and also missing the point. If there is any eye-candy here it's the Grade One listed John Rylands Library fifteen metres over the road, with its stunning Gothic revival intricacy. One Two Five Deansgate looms over the latter like a thug threatening a granny. It doesn't matter that the fenestration is partially stepped back on the tenth floor, the new building overwhelms one of the city's most precious buildings. Next door the 1980s' Centurion House by Leach Rhodes Walker recognised this and was pushed back to give the library breathing space. This meant it didn't break the cornice line on this side of Deansgate.

One Two Five Deansgate might contain '117,000 sq ft over 12 impressive storeys, including a 10th floor terrace with stunning views and best in class building amenities' but it breaks ranks on Deansgate. It's a planning error of the highest order, an assault on a Manchester tourist asset and a place of deep learning. The attempt at matching the building to the red sandstone shade of John Rylands Library only adds insult to injury. It makes Deansgate a dark canyon at that point, it makes John Rylands Library a place to hurry past not linger over.