Manchester International Festival: the hits and misses so far

It’s been just over a week since Manchester International Festival launched in an evening of huge crowds and divided opinions. Yoko Ono’s free mass-participatory event Bells for Peace - which saw thousands gather in Cathedral Gardens to ‘ring and sing out’ for peace - attracted a response akin to Marmite, while Idris Elba and Kwame Kwei-Armah’s also proved divisive following a scandal over its authorship: the play itself has garnered middling reviews.

Even Janelle Monáe’s sell-out concert wasn’t immune to controversy, its ‘first come first served’ seating causing problems for some disabled ticket-holders, but the show generally proved a stonking success with critics: our own reviewer Lucy Milburn called Monáe ‘a true performer with the vocals to match.’

Since then, the festival has unfolded with a diversity of events at venues citywide: including a one-night collaboration between ‘the world's greatest spiritual singer’ Abida Parveen and South Asian dance legend Nahid Siddiqui; a blend of dance and spoken word with New York choreographer Reggie ‘Regg Roc’ Gray and Young Identity; a two-part performance commemorating the 200th anniversary of Peterloo; and a performance of Leningrad from the Hallé Orchestra. 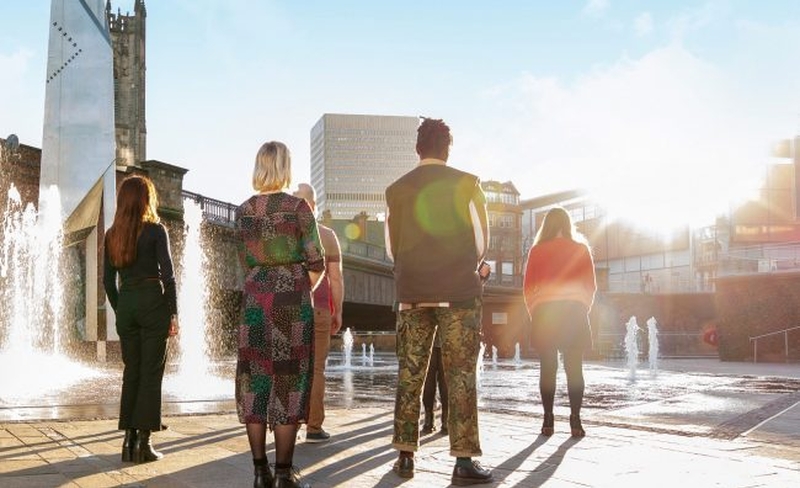 Could Manchester ever be called a Utopia? Not according to Freddie Engels, who thought it ‘the highest and most unconcealed pinnacle of social misery existing in our day.’ Artist collective Rimini Protokoll are undaunted by Manchester’s rep though, as their contribution to MIF asks how we can transform our present day society into a utopia for all.

Inspired by Thomas More’s 1516 work of political satire, Utopolis is best described a citywide scavenger hunt meets site-specific work that shades into immersive theatre. Disparate groups are asked to meet at various points across Manchester and, under the guidance of a most unusual chaperone, discover places in the city that shape our lives every day.

While there, we were instructed in various activities but - most importantly - encouraged to ask questions and try and build our vision of the future. The interactive element might be a bit gimmicky for some, and somewhat predictable at an international art event, but there weren’t a lot of dissenting voices; everyone seemed to be very pro love, kindness and freedom (props to the chap who argued for nationalising Greggs though).

The most impressive feat of all was the amazing amount of organisation and sheer logistical ingenuity that went into this over four-hour long extravaganza (bring comfortable shoes, there is a lot of walking). As far as I know, no one got lost, which in itself quite astounding.

There were moments when I felt like I was in a bizarre mash-up of a political theory tutorial and an episode of Challenge Anneka but our very last activity, which involved laying on our backs and gazing up at one of Manchester’s most beautiful ceilings, was something quite special indeed. Lucy Tomlinson 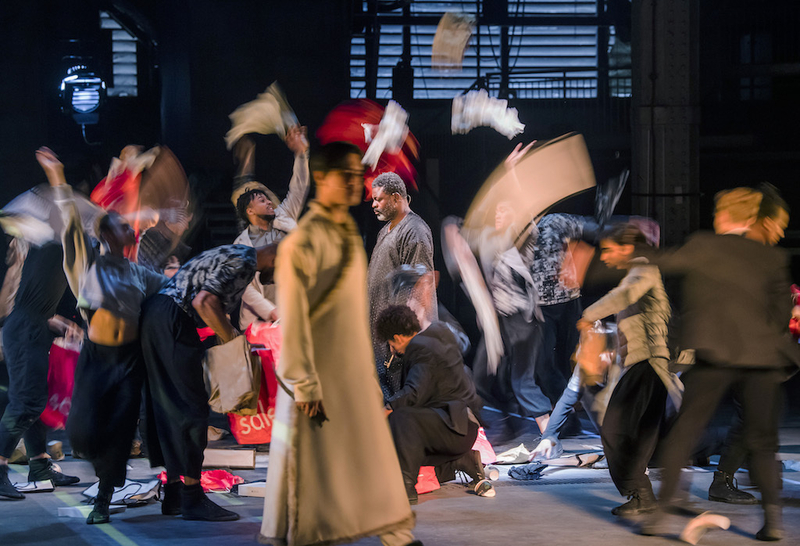 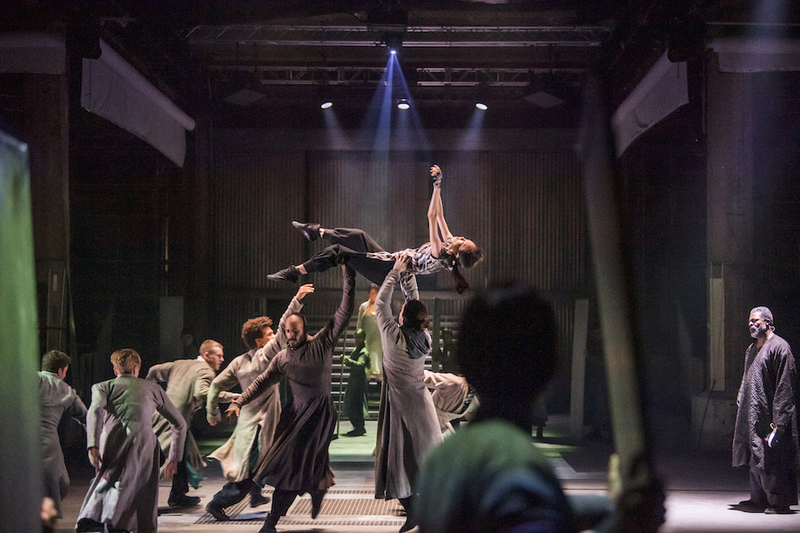 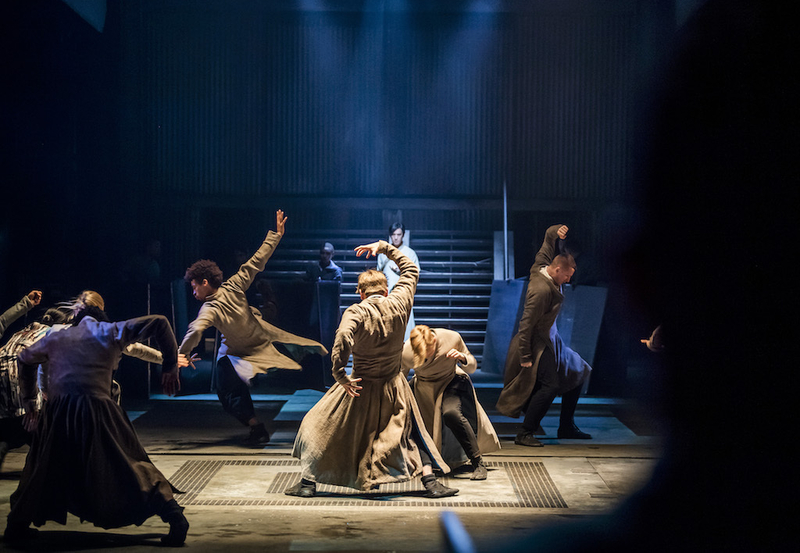 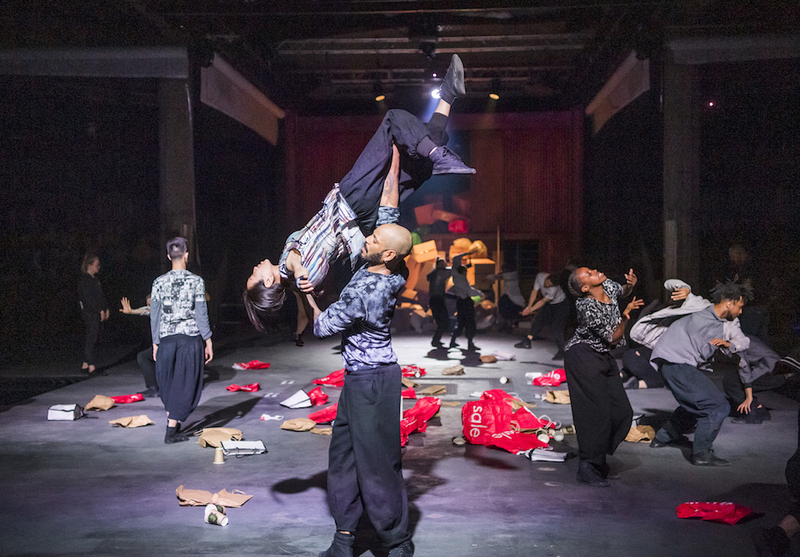 Invisible Cities is inspired by the renowned 1972 novel by Italo Calvino, in which Kublai Khan (Danny Sapani) - the volatile head of a vast expanding empire - bids Venetian explorer Marco Polo (Matthew Leonhart) to describe the cities he has visited within it. What transpires is a series of parables, each evoking a fantastical otherworldly city that mediates on human experiences like culture, time, memory and death - creating a shared language between men from opposite ends of the earth.

As the two converse, Rambert’s dance troupe conjures each city around them: from the one whose desire has enclosed it in the walls to the one whose consumerism has created mountains of excess around it. Elsewhere citizens walk on stilts and prowl the sky, while one city is mirrored below ground; a necropolis in which its ‘dead’ still live on.

Not only are the actors and dancers extremely talented, those behind the scenes clearly are too. The show is directed by Sidi Larbi Cherkaoui (also choreographer) and Leo Warner (whose company 59 Productions managed concept and design), while Lolita Chakabarti adapted Calvino’s novel for the play. But huge credit must also be given to the designers - set, video, costume, lighting and sound - for all are incredible. Add in the composers’ superlative score, and the cavernous ‘stage’ of Mayfield Depot (no easy feat to fully inhabit and bring to live) and you have a mythical kingdom that rivals Game of Thrones; one that plays out in 360 degrees as the audience watch from all corners.

The only thing that gave reality away? We could see each scene being set up through a gap in the interval curtain. While the scenes projected onto it provided some distraction - all themed on travel and terrain as per she show’s premise - it wasn’t quite enough.

This, however, is a very minor gripe. Over two years, the Invisible Cities team have made possible what its director Leo Warner first thought would be anything but. Its ambitiousness is breathtaking…but they’ve pulled it off and, much like Marco Polo and his cities, turned imagination to reality. Vicky Smith 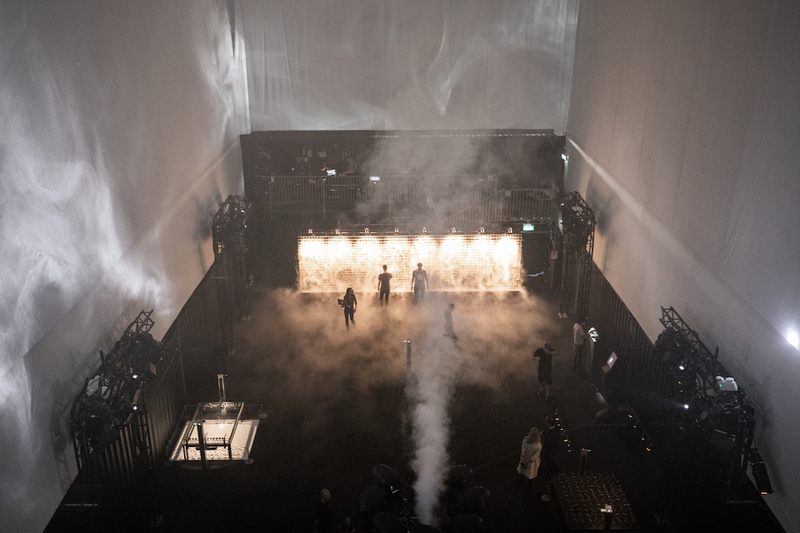 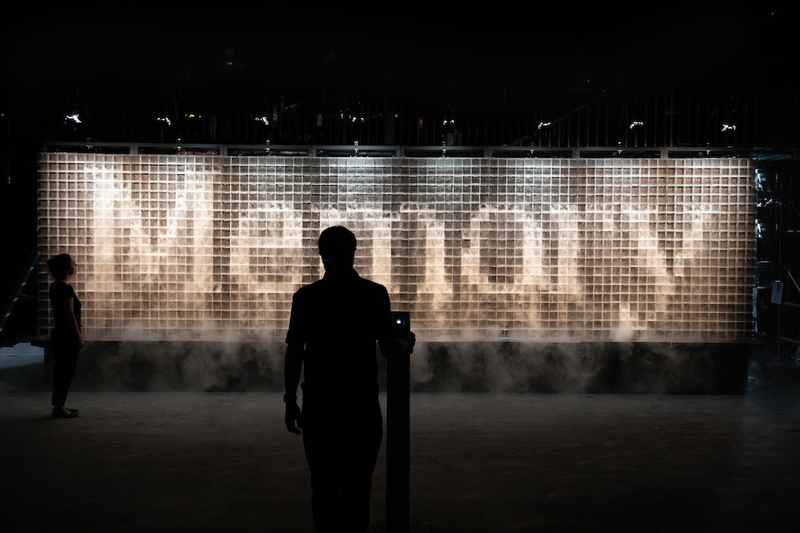 I recently found out that one explanation for ghosts is that they are the imprints of a physical presence on certain building materials - a kind of inadvertent recording if you like. As I approached SIM, as we now apparently call it, I wondered if that was what Rafael Lozano-Hemmer’s Atmospheric Memory was intended to replicate (I’d already heard about one of the artworks, Cloud Display, and it seemed to fit my theory).

This wall of writing, its words shaped through tangibly cold water vapour, turns out to be the second of nine pieces you experience: the first is the somewhat offputtingly described ‘dark tunnel’, aka Atmosphonia, a corridor hung with 3000 bespoke speaker-cum-LED light contraptions that rush towards you and ebb away in pre-programmed waves. It’s quite relaxing until you remember that the sounds include over 200 types of insects. And bombs going off.

You forget the bombs as you enter the main chamber and are instantly thrown into the ‘interactive art environment’ mentioned in the introduction. Let your eyes adjust to the semi-gloom, and you come face to face with a gaping monochrome space filled with manmade noise, immersive ‘games’ and the realisation that a whole hour of this is stretching out ahead of you. The aforementioned Cloud Display fronts the room, its sides lined with various speech-controlled installations you can play with…if you’re in pairs or you don’t mind sharing your toys with strangers, that is.

The loners amongst us slip to the side and try to make sense of Lozano-Hemmer’s Last Breath, Volute 1 and Vocal Folds; the latter showing endoscopic films inside painted oil drums. I’m especially foxed by a vitrine of objects dusted off from SIM’s own collection, apparently to provide context, and Babbage NanoPamplets; this was inspired by Charles Babbage and Ada Lovelace’s first computer and software collaboration, which itself inspired Atmospheric Memory, but the context was lost.

The ninth piece? Flag Beacon, which will make all the grown-ups want to melt into the margins, but which has already lured you in with its flickering searchlights running round the perimeter and looped projections of drone footage. Too late, you realise you’ve become part of the art as your image looms large on what becomes a giant surveillance screen. Time to leave. Sarah-Clare Conlon

Atmospheric Memory is on until 21 July at Museum of Science & Industry, Liverpool Rd, M3 4FP (hour slots between 10am-5pm; tickets £5-8) 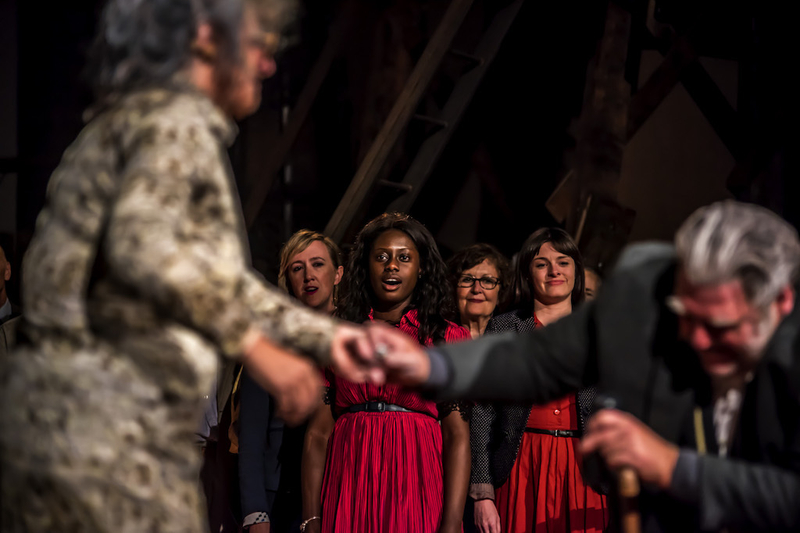 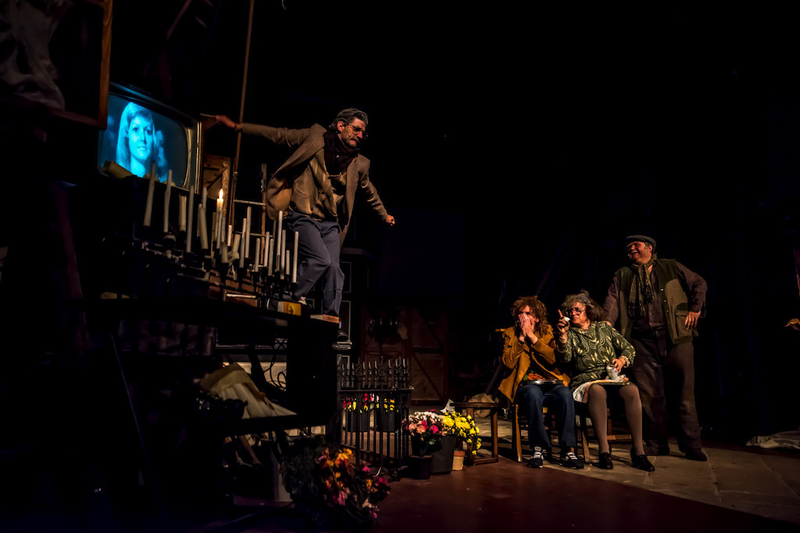 Studio Okra is made up of actors and designers who create site-specific plays inspired by original locations. For MIF, the Belgium-based theatre collective has moved into St Augustine Church in North Manchester, bringing with them the heart-warming story of Tuesday. Abandoned as a baby at the end of the Second World War, Tuesday has lived in the church ever since and now reflects on his life as he enters his twilight years.

The audience perch on elevated seating facing the back of the church, where the action unfolds. Wooden scaffolding lines either wall of the ‘stage’, which the characters periodically climb and explore as the action unfolds. On the back wall is an elaborate set built high up above the door, where Tuesday lives. One of the most poignant moments in the play is watching old man Tuesday shuffle up the scaffolding to his ‘apartment’ with a single lantern, the light of which bounces magical shifting patterns off the walls.

Tuesday’s success lies within its inventive use of the church space and the relationships between its characters. The chemistry between the silly, comedic characters of Hilda (Janne Desmet) and Nestor (Dominique van Malder) is palpable, as is the tragic relationship between Nestor and his son René (Robrecht Vanden Thoren) whom he loves and yet alienates with his unrelenting criticism.

Ironically, Tuesday’s character (Titus de Voogdt) is the least developed. While the other characters age and change over time, the shift between Tuesday’s younger and older selves isn’t as clear, nor is his role in the action. As a consequence, we’re pulled out of the story, wondering whether Tuesday’s really in the scene or just observing it.

This ambiguity is characteristic of the play but detracts from rather than strengthens it. It’s too naturalistic to be embraced as a surreal production, meaning surreal elements - like Nestor’s mechanical heart - are just confusing. Similarly, the play is based in England but would’ve been better placed elsewhere. Not only do the actors obviously have Belgium accents, historical details don’t add up. Tuesday’s abandoned by fleeing refugees - but there were none in England at this time. His birthday is in September, but VE day was in May. For a production that claims to be site-specific, getting these details right is key.

Tuesday has come under fire for casting a non-disabled person in a disabled role. The storyline has been amended so this disabled character makes a full recovery by the end of the story, and this doesn’t detract from the play.

Overall, it tells a moving story about the people that shape our lives. As such, amidst some of the flashier less story-focused pieces, it may be one of the more successful productions at MIF this year.

Opinion: Stop sh*gging the Hacienda
What you say
Read Next
● / Travel