Elsewhere, Idris Elba and Kwame Kwei-Armah’s Tree premiered amidst some controversy, as two creators involved it its early stages claim to have been unfairly treated.

Here’s what we thought of the festival’s opening events… 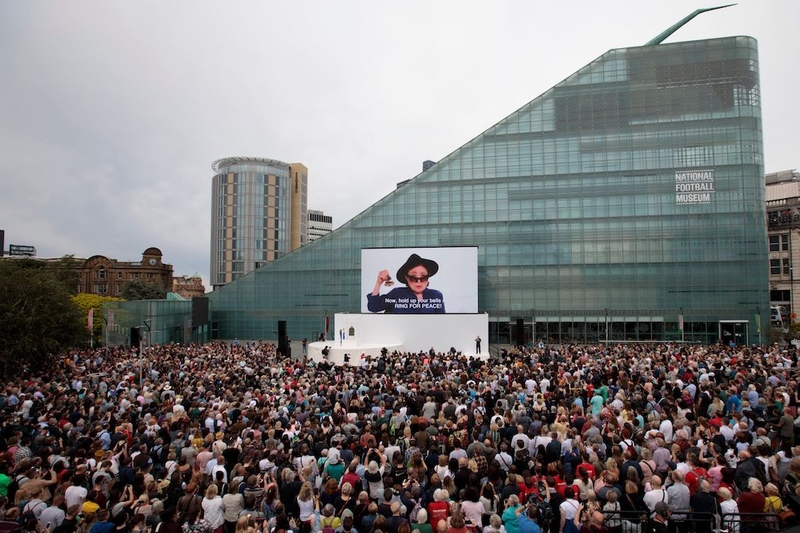 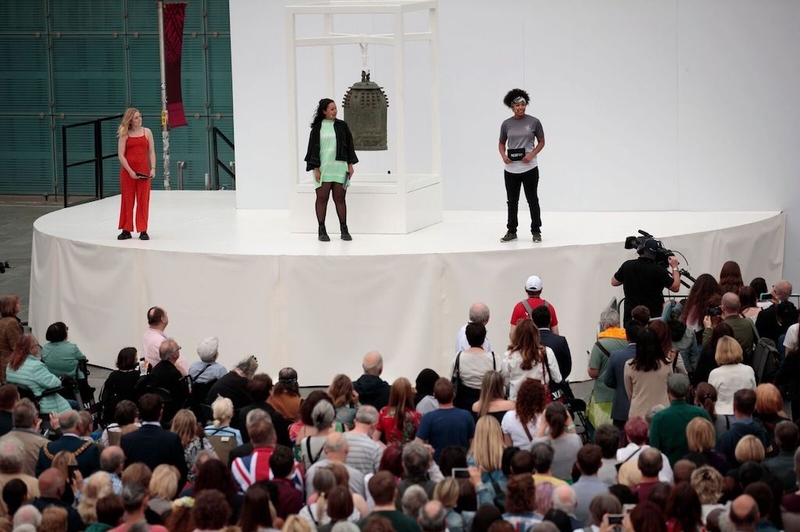 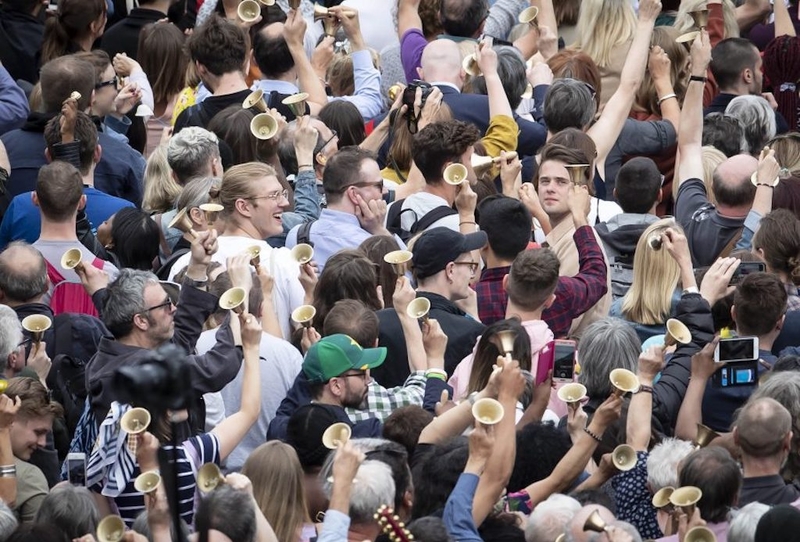 Yoko Ono’s festival opener has divided opinion…and that’s putting it lightly. Descriptions I’ve heard so far include ‘bobbins’, ‘disappointing’ and a ‘a load of tosh.’ Others say they found the experience strangely moving, and indeed the woman next to me had a tear in her eye. As for me, I’m somewhere in the middle, although it is a little disappointing that two of the festival’s biggest names (Yoko Ono and David Lynch) aren’t here in person; Ono appeared on a pre-recorded film, while the only appearance from Lynch will be via Skype at a special limited-capacity event later in the run.

Introduced in a short narrated film by actor Julie Hesmondhalgh, and onstage by some of MIF’s young creators, Bells for Peace saw thousands of people gather in Cathedral Gardens to ‘ring in peace’ - many taking one of 4000 engraved bells provided especially, others bringing their own. One woman told the crowd she’d brought her grandfather’s bell, used to warn people of air raids during WW2. From Liverpool, she last came to Manchester when her daughter attended the Ariana Grande concert, making her visit ‘for peace’ especially poignant. Another interviewee had made her ceramic bell at one of several pre-event workshops across the city, its quiet tinkle prompting laughter from the audience.

Then followed a short film on peace in Manchester, from movements like ‘We Stand Together’ following the arena attack to initiatives like the Hiroshima gingko sapling planted at Manchester University and organisations like Climate Strike and Carisma.

Finally Yoko appeared (a pre-recording of her anyway) - giving instructions like ‘breathe together, ‘name the clouds’ and ‘listen to the earth turning’ before telling us to ‘think/act/spread/image peace’ against an increasingly clamorous background noise. Tension built, we were then told to ring our bells; a sound that wasn’t as loud as I thought given the amount of people, no need for earplugs after all. This went on for several minutes, Ono giving us ringing variations like ‘to the universe’, ‘highly’ and ‘softly’. And, as ‘peace is power’ resounded and the screen panned out to show the crowd, the bells were finally silenced.

Her duties done, Ono then said goodbye and disappeared before a sing-along to Give Peace A Chance and the crowd gave a final cheer.

Yes it was about as ‘new age/hippy dippy’ as could be but, while I found it a little underwhelming for an opening show, the motives at least were admirable; inspiring a sense of community that saw several people chatting away to those next them well after the event ended. And after all, what better inspiration is there than peace? Vicky Smith 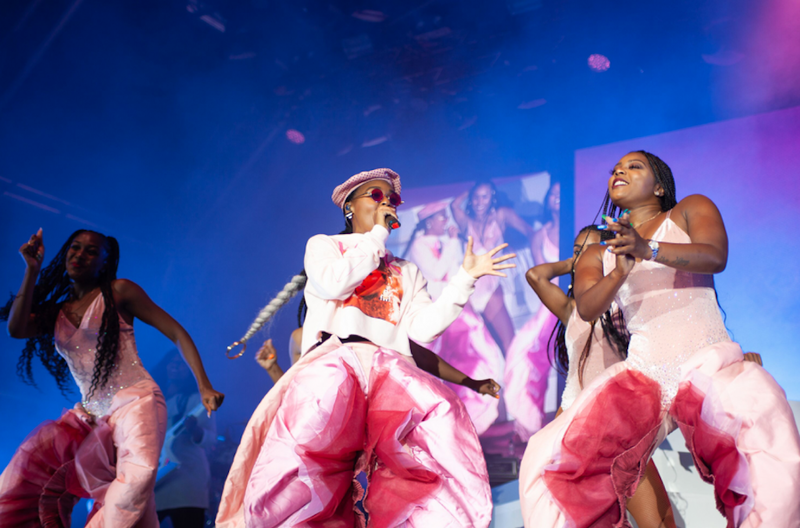 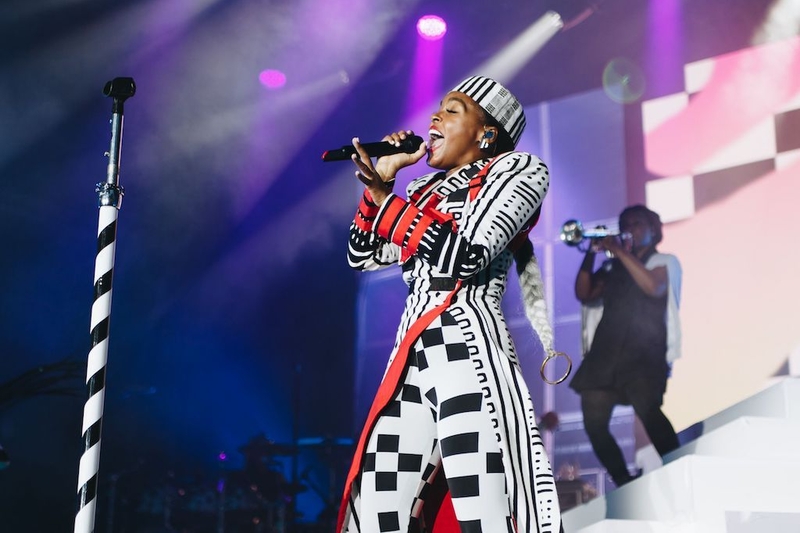 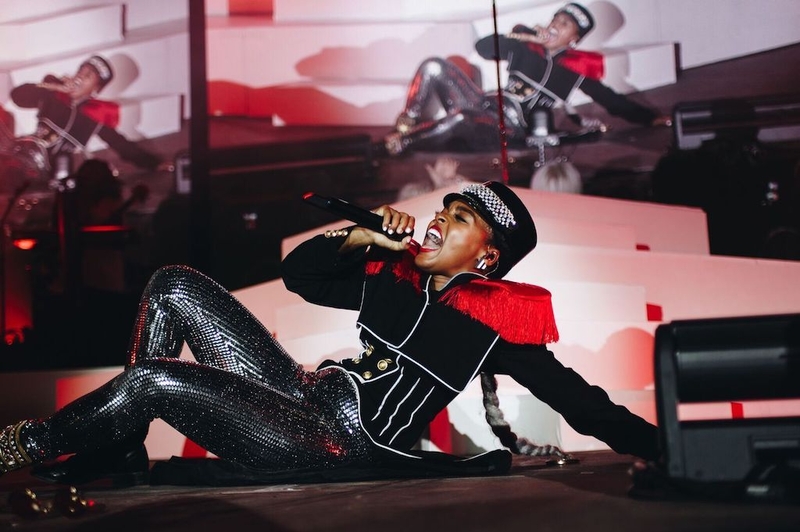 Fresh from a triumphant Glastonbury performance, Janelle Monáe was met by an adoring crowd at Castlefield Bowl. It may have been her Manchester International Festival debut but, from the audience’s reaction, it felt like a homecoming.

Arriving to the intro of Space Odyssey, dancing in vagina-inspired pants and wading calmly through the crowd are not the on-stage antics of your average pop star. Part activist, part actor, part ‘android from the future’, Monáe has never really fit that mould.

Her opening night performance was powerful in both sound and sentiment. Despite her reputation for drama and spectacle, the theatrics were limited, with only a small group of dancers. “I’m proud to be a black, queer woman standing on this stage,” she asserted to the crowd in a moving speech that complimented the playfulness of the evening.

Monáe has been an acclaimed artist for over a decade, but these past two years have seen her star status rise. Once one for the critics, the release of her third album Dirty Computer - a crazy combination of soul, rap and party hits - sealed her mainstream popularity.

The set primarily drew on this record; with the empowering bars of Django Jane, Screwed and I Like That. For feminist anthem PYNK, those vagina pants made an appearance in the most iconic costume change of the night. Strapping on an electric guitar, she moonwalked across the stage to Prince-inspired Make Me Feel. One moment she was royalty, sitting on a throne singing Q.U.E.E.N, the next she was pulling audience members onstage to get up close and personal during I Got The Juice.

However, those expecting something special for Manchester International Festival may have been disappointed. Monáe seems reluctant to mix it up and the show was identical to every other date on the tour, right down to the speech on inclusivity. The seamless costume changes and tightly choreographed dancers, meanwhile, verged on feeling too polished - but Monáe was slick enough to pull it off. She’s a true performer with the vocals to match.

The encore was Come Alive (The War of the Roses); a non-single from her 2010 debut album that may have been unfamiliar to some. In an impressive display of crowd control, everyone crouched down in silence as she wove through the crowd. It was a positive and good-natured evening as the singer paved the way for a festival full of powerful women. Lucy Milburn 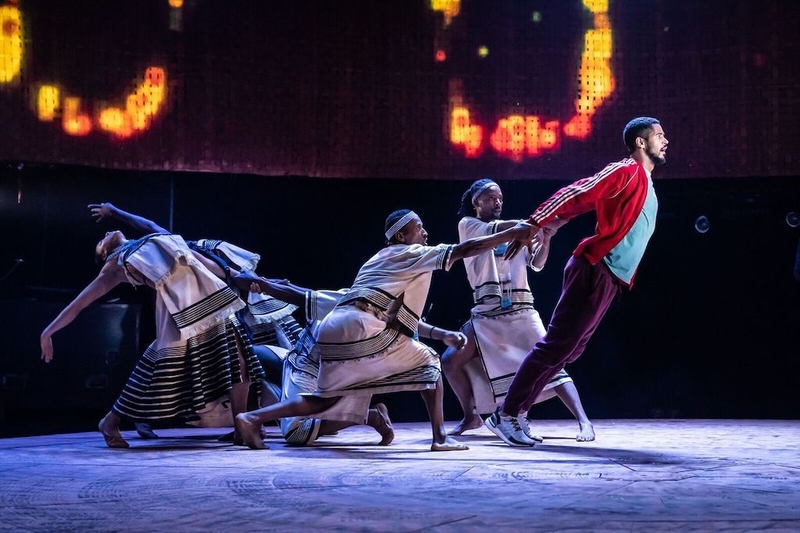 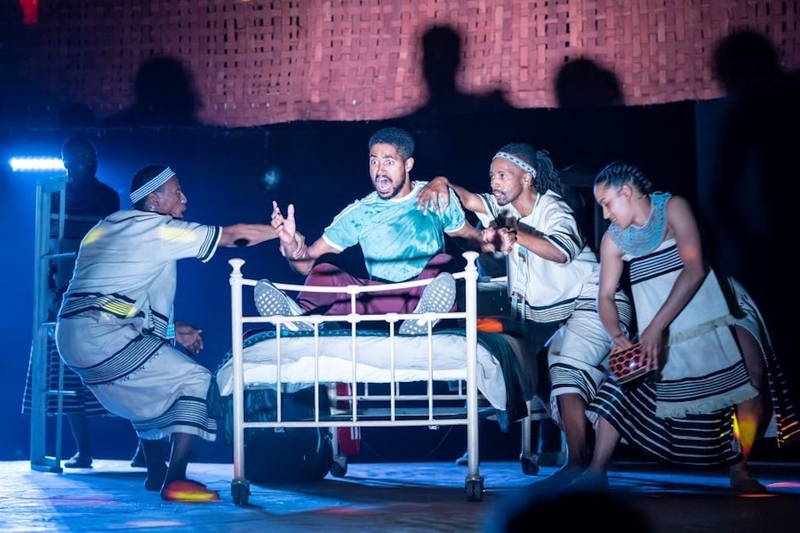 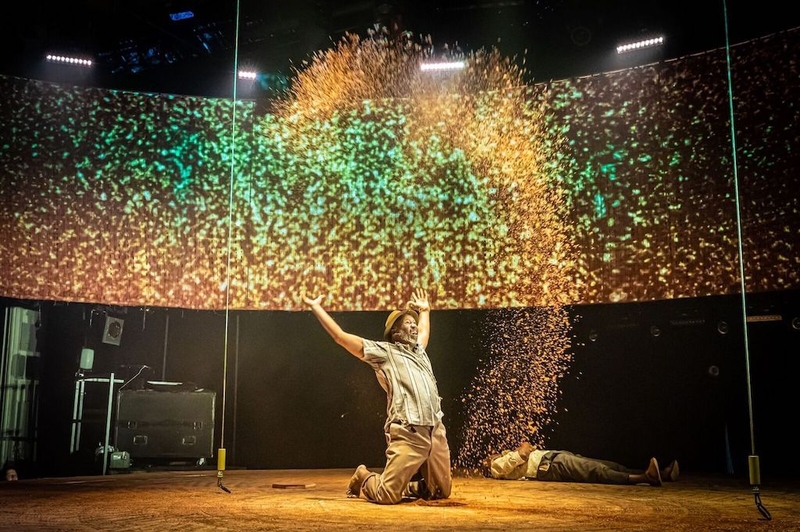 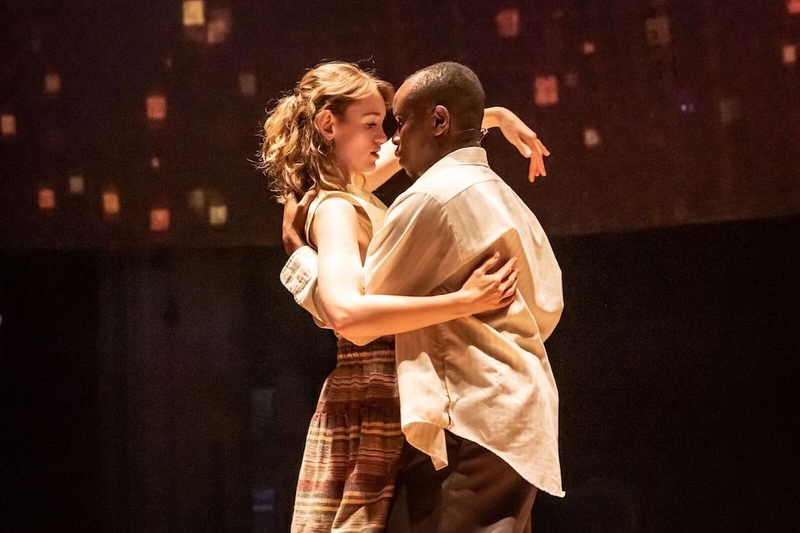 Tree will blow your mind. If you’re like me, within five minutes of entering Upper Campfield Market, you will have a Heineken in hand and be on stage dancing with fellow revelers, made up of audience and cast. Strobe lights will decorate your face as arms wave and hips gyrate. “Is this a play or a rave?” someone will question above the thumping music.

From an experiential perspective, Tree is sensational. Idris Elba, ‘co-creator’ of the production, told the Guardian he was aiming for a ‘different kind type of listening’, where the audience realise ‘Oh shit, I’m in the drama!’ This is achieved with phenomenal success. The audience stand, surrounding the stage, and are regularly enveloped into the action. Now we’re at a rave, now a play, now a rally. Actors flit through the crowd, handing out protest signs, making speeches, shaking hands. But this isn’t cringey audience participation. It’s organic and communal. We’re already part of the action.

Tree is the story of Kaelo (Alfred Enoch) from Hackney, who returns to South Africa to discover his roots. Along the way, he finds his half sister (Joan Iyiola) who’s an anti-Mandela, nouveau-riche Mercedes-driving musician-cum-property-developer.

Plot and character development peak when the siblings fall out. “Why did you meet me?” Kaelo demands. ‘”I wanted to see what privilege looks like”, his sister replies derisively. It’s a brilliant, nuanced dynamic. Unfortunately, the plot falls prey to Disney, happily wrapping up and ending with another rave. Kaelo and his sister reconcile, agree to ‘let go’ of the past and become property developers together.

As such, you’d be forgiven for thinking all’s well now in South Africa. The music pulses, your critical brain shuts off. But the message of the play is this: the new ruling class enrich themselves off the land while the rest of the country remains mired in poverty.

Considering the play explored the country’s troubled past, it’s surprising it ends so uncritically. This makes me question the writers - although, whoops, I’m not sure who they are. Tree has been overshadowed by an authorship row, with two female playwrights claiming they weren’t credited for their role in the work. If their claims are true, it’s not only shocking but also deeply ironic, considering Tree is a story about ownership and expropriation.

Whoever the creators are, I have to give them full credit for a phenomenal theatre experience, but it’s disappointing the storytelling didn’t pack the same punch. Andrea Sandor

Earlier this week, we were also treated to a preview of Ibrahim Mahama’s Parliament of Ghosts; an evocative exhibition that explores the half-forgotten history of Ghana, now open at the Whitworth. Taking over three rooms of the gallery, the installation features abandoned train parts, documents from governmental archives and a haunting assemblage of lost objects - rescued and repurposed to form a vast parliamentary chamber. Here’s our lowdown… 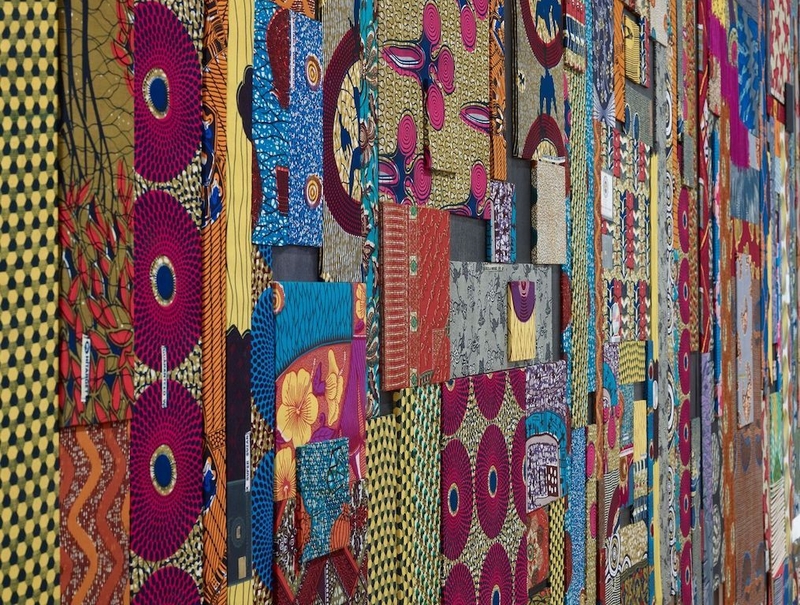 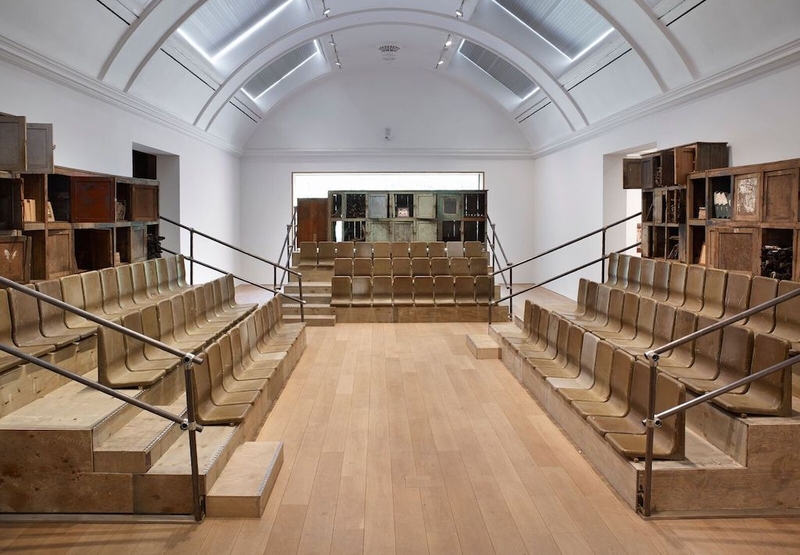 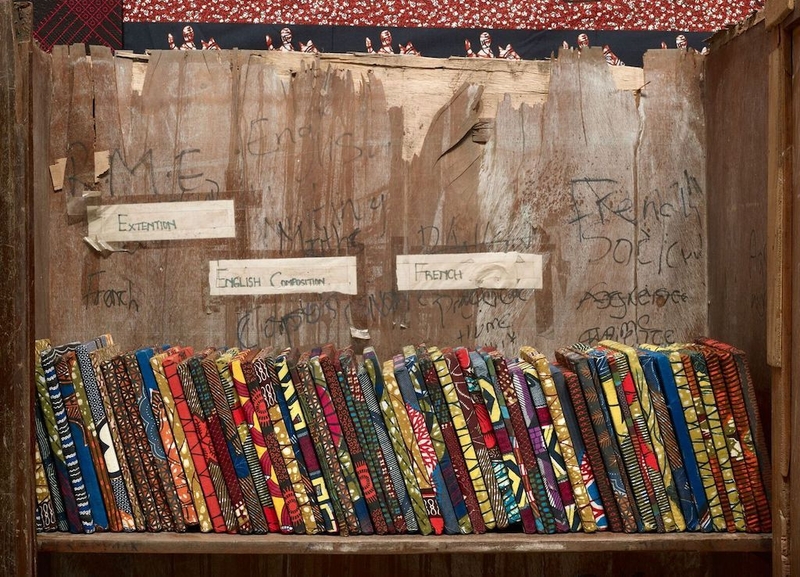 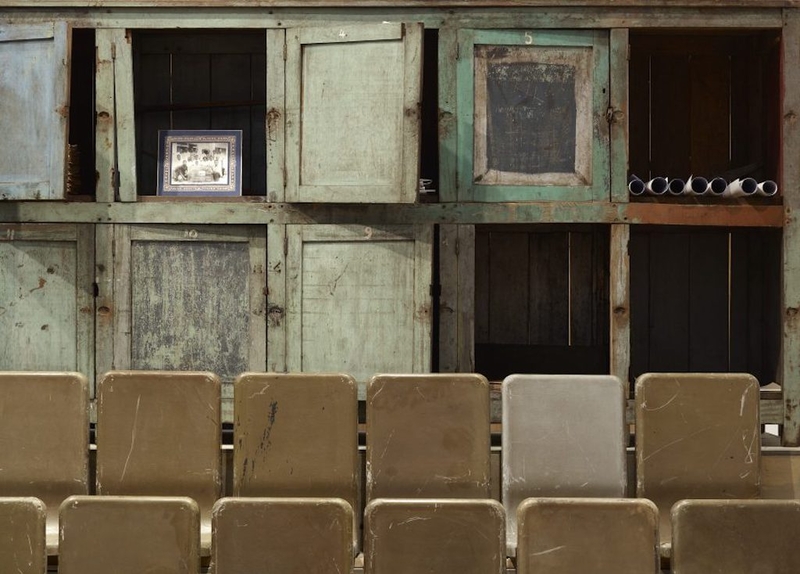 Inspired by the ‘decaying residues of British colonial rule, and the often equally dilapidated ‘freedom architecture’ that followed Ghana’s independence in 1975’, Parliament of Ghosts follows Mahama’s three-year research on the history of the Ghana railways.

The centrepiece of the exhibition is what looks like a parliamentary chamber - whose (second-class) seats were salvaged from 20th century trains from the now defunct Ghana Railway, built as part of the Gold Coast Railway and used to transport major exports like cocoa and timber during British rule. Like the trains, these were probably made in Manchester or Leeds. Leather that lined seats in the first-class carriages, meanwhile, have been used to bind historic photos and documents; some shipped from the coastal city of Sekondi, where the Railway HQ was based. All of these can be explored, archive-like, in old cabinets, lockers and drawers throughout the exhibition - along with the likes of food containers and shoes from decades of labourers.

In another room, a seven-channel film installation is screened inside a giant silo; modelled on the huge unused concrete silos built under Kwame Nkrumah, Ghana’s first president, to store cocoa. The film includes re-enactment of parliamentary debates from Ghana’s early independence years, making it feel slightly dystopian in light of the governmental collapse that followed.

Elsewhere, visitors find two large textile hangings; precursors to the monumental jute sack works for which Mahama is now well known. Made using Ghanaian fabrics printed worldwide, including the ABC Wax Factory that once operated near Manchester, they also include handmade textiles worn as symbol of national unity after Ghana’s independence. A funeral cloth interrupts the piece, perhaps reminding us of the country’s volatile political and economic situation.

Vibrant textiles aside, most of the objects - in their ravaged state and sepia tones - look a little hopeless…but Mahama is clear they are not. In his region, people have often been forced to migrate to find work (as conveyed through photos of migrants’ arms, tattooed with family names in case of injury or death). Through his artistic practise, however, Mahama is creating new opportunities for local people; particularly in his home city of Tamale. And, as the guide tells us about many of the objects, ‘though on the brink of collapse, testament to crisis and failure, they also embody a radical potential for Ghana. Simple ideas and mundane things could make extraordinary change.’

I’m not often a fan of installation works like this but Parliament of Ghosts gives visitors a lot to think of and is as relevant now as ever. Particularly in an age of Brexit, perhaps it’s also a lesson on how Britain getting too big for its boots doesn’t always end well… My only recommendation? Go informed on Ghana’s Colonial history or you might struggle to engage - otherwise, a rewarding visit awaits. Vicky Smith

Parliament of Ghosts is on until the end of the festival (and then until 29 September) at the Whitworth, Oxford Rd, M15 6ER (10am-5pm, 9pm on Thurs; free)