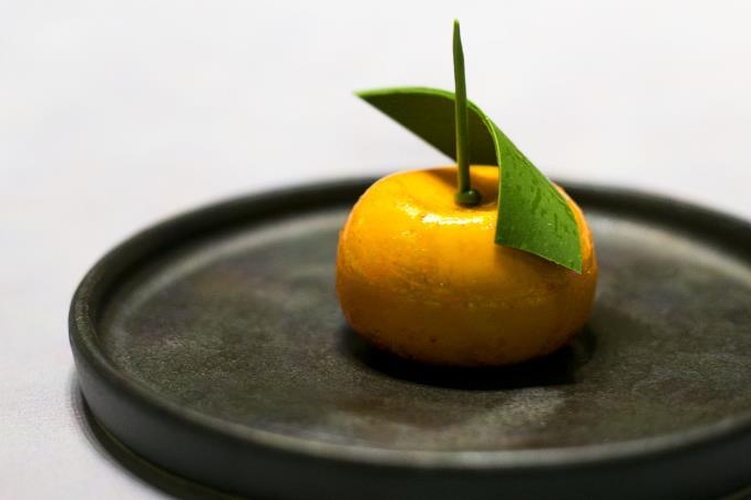 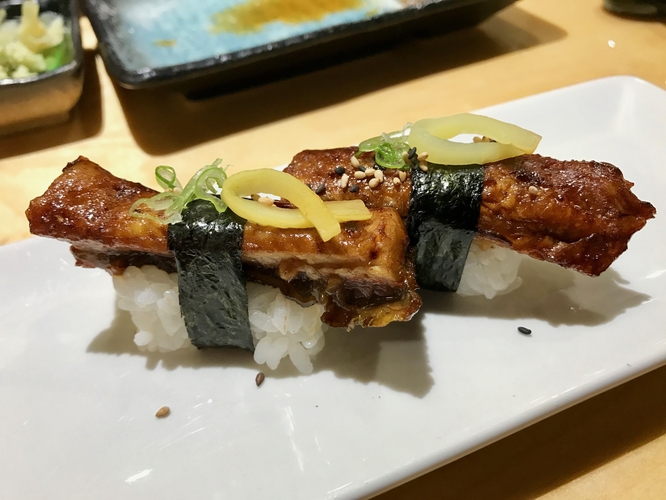 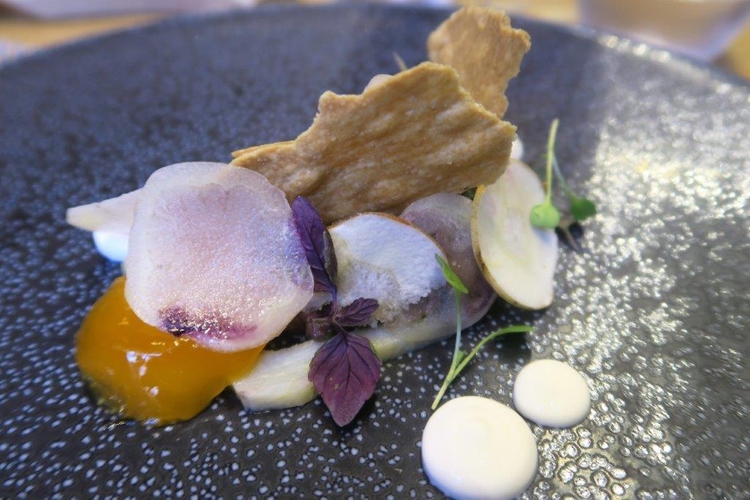 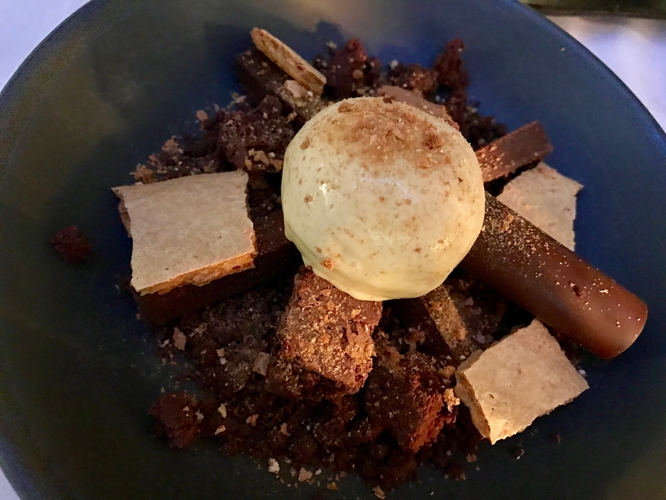 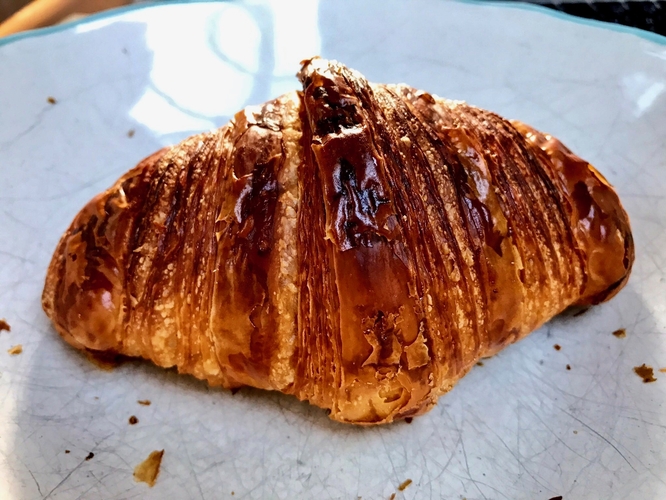 From Bouillabasse to fish finger butties and clementines that aren't clementines...

This month we've been hanging about in The Midland, admiring fine unagi and running Amok in Marple...

This dish brings with it an admirable balance of multifarious flavours. What a colourful thing it is too, flowers, flesh and a golden sun of a confit egg yolk, that if gently prodded has that strangely alluring quality of unbaked bread sat waiting in its loaf tin to be softly poked. Glorious artichoke helps things along and there’s an entertaining home-made yoghurt plus cardamom oil that is powerful without being a bully. This venison collation is one of eight cracking starters at Cooper’s all of which are worth trying. It is pricey at £12.50 so remember, if broke, for the same money you can buy six and a bit fish finger butties at the Bull’s Head. Jonathan Schofield

Strange things eels. At least snakes are dry. These slimy, wriggly little bleeders are just large, sweaty worms. That is, until they get the Umuzushi treatment. Gordo recently had his birthday lunch there with Jonathan Schofield, Confidential’s editor-at-large and a frustrated architect. Upon sitting down we simply told them to give us everything they had, which included Unagi Nigiri (that’s eels tied to rice to you and me) for a very reasonable £6. There they sit, malevolently on the plate, glaring at you. If we were wearing short pants no doubt both of them would have shot up our legs for cover, ferret like. But before they had chance they were shoveled down our gullets and, well, bloody hell, this was a like the near-death experience described by Douglas Bader in his book Reach For The Sky. Legless Dougie enjoyed the feeling so much he spent most of World War Two flying spitfires and trying in vain to be shot down. Likewise, Gordo has tried three times to go back and eat this dish, an easy 10/10, but the bloody place is always full. Now Gordo knows how Bader felt… bastards. Gordo

Sometimes you just don’t feel like tackling the suet Annapurna of a Chop House steak and kidney pud. Better to ramble through the foothills of their ‘light bites’ (it’s all relative) and discover a fleeting gem like this. The black pudding is made in-house, the sweetbreads are veal, the most succulent. Ballast comes from crushed potatoes, their own baked beans and a bay leaf sauce. To accompany? A pint of the Chop House’s Rhys’s Remedy, a delicious dark mild brewed specially by JW Lees in memory of bar manager Rhys James, who lost his battle against cancer in February. 10p from each pint sold goes to Shine Cancer Support, which provides a beneficial social life for sufferers in their twenties, thirties and forties. Neil Sowerby

I never got to try chef Adam Reid's apple - the Golden Empire dessert that won him a place in the finals of Great British Menu, but his Clementine pre-dessert has got to be just as good, if not even better. Using a similar technique, he has blown a hollow Clementine outer shell from sugar – both on theme with colour and flavour. This case has been filled with light white chocolate mousse which in turn surrounds a sharp (and also bright orange) sea buckthorn sorbet. The stem and leaves are fashioned from solid white chocolate dyed green. Beautiful to look at, well thought out, perfectly crafted, delicious and ridiculously satisfyingly to smash up and whack down your gullet. Now Reid heads his own restaurant it’s interesting to note that he’s removed the necessity of visiting The French for formal meals or long tasting menus. Apparently if you just want to pop in and sit at the new counter for a Clementine and a coffee or glass of dessert wine, you will be most welcome. Deanna Thomas

It’s becoming clichéd to bang on about how great the Refuge is, isn’t it? Yet their Sunday sharing roast for two (or one in the case of our editor) has me at it again. Feast your eyes on a smorgasbord of roasted meats, Chantenay carrots, sticky red cabbage, crispy roasties and cauliflower cheese, baked to order. Staff buzz back and forth asking if you’d like more gravy, roast potatoes or whatever. But whether you can manage a second Yorkshire as big as the marshmallow man from the end of Ghostbusters is another question. From sticky roast pork to wafer-thin rare Dexter beef and spatchcocked chicken with a fabulously crisp skin, the meat is faultless. As is the volcanically spicy Bloody Mary, served in a cauldron-sized wine glass on the side. Ruth Allan

There aren’t many good ones in Manchester, that’s for sure. Pret’s is ok, actually; buttery and flaky, though undoubtedly delivered frozen and cooked off on the premises. It does a job, which is all I’ve come to expect from croissants in the UK. That was until Confidential food writer Deanna Thomas returned from a new bakery, Pollen, that had opened in no-man’s land beneath a railway arch in Piccadilly. She tore Gordo a little corner and he instantly fell in love. Though it looked burnt, it wasn’t, rather caramelised to perfection; crispy, slightly sweet, light as air in the middle with a flavour that took Gordo back to the food market in Cannes. Fantastic. When Gordo isn’t on a diet (which he currently is) he has three delivered every Friday morning to ManCon Towers, intending to save two for Saturday morning… twenty minutes later he’s scoffed the lot. Gordo

I’d be surprised if two exact versions of this classic fish stew from Marseille exist. Many are quite gentrified and polite, while others have a greyish base that might not be pretty but packs a proper piscine punch. I’d describe the one at Altrincham’s Bistot Pierre as hearty and fantastically fishy – low in fat and high in protein, for those to whom such things matter. The full flavoured seafood stock base, enriched with tomato, had been cooked down slowly until the chemical change released its full base notes. Piled onto this soup were plenty of mussels, juicy shell-on king prawns, fat cubes of smoked haddock and a whole grilled fillet of sea bream. I only noticed the day after, that one of the cubes of fish had somehow fallen into my open handbag under the table, infusing all my necessaries with the aroma of day-old smoked haddock. Deanna Thomas

Seasonal sustainable cod? It’s a tribute to chef David Gale’s experienced sourcing instincts that he can put on the plate the utterly delicious, omega 3-rich Skrei, almost certainly making its debut in Whitefield. The name comes from the Norse skrida for ‘wander’ and that’s what the Skrei does, its annual migration from the nutrient-rich Barents Sea giving it a brighter white flesh than other cod cousins. Over-cook just a smidge and the texture turns to cotton wool. Gale, quite a wanderer himself, who has just settled down in his own restaurant, does it justice. Under crisp skin its pristine white flakes were classically paired with peas, bacon and clams in a toothsome nage. It’s only going to be around until April; make the voyage of discovery to Whitefield. Neil Sowerby

Akin to Hawksmoor’s ode to Ferrero Rocher (‘The Ambassador’s Choice’), or Quill’s giant rolo (the only thing I really liked about the place), Rosso’s chefs have created a grown up version of Malteasers in their new ‘malted teaser plate’. Almost bitter chocolate crumbs create a platform for sticks and curls of dark and milk chocolate, dusted with bites of bubbly choc. The homemade malt ice cream is a richly grown up, almost savoury counterpoint in the centre of this abstract expressionistic creation. Yet like a Jackson Pollock painting, the individual elements come together to create a new and unexpected whole. Bravo. Ruth Allan

I was torn at thus unique combo of Cambodian restaurant and vinyl boutique between two national tresures – Loc Lac and Royal Amok – the first marinated beef stir-fry elevated by a tingling lime and black pepper sauce that is so Cambodian. But it was pipped by the Royal Amok because this is a Far Eastern fish dish not overwhelmed by the spices. It is steamed in a banana leaf with a lemongrass paste, kaffir lime leaves and coconut milk, which forms heady emulsion for a mound of jasmine rice. A far remove from a coarse pub Thai green curry. Neil Sowerby

When one’s palate grows tired of the endless round of decadent food nuances, of jus and roux, of heritage beetroot and rarebreed coot, of Farmer Jack Buckthorn’s 100% organic locally sourced hand-tickled, burnished gooseberries, of cherimoya and takifugu, then it’s time to contemplate simpler things. And cheaper ones. For two English pounds in a pub by Piccadilly Station there’s a lovely pair of plump baps (the perfect size and number) filled with fish fingers accompanied by packet tartare sauce. And hallelujah! The baps aren’t primed with lashings of odious mayo. Just processed fish fingers and dough. Then tartare. Take with a beer. Smile. Have another beer. Get on a train to exotic locations or mundane. Reset. Jonathan Schofield

Poached Pear - Where The Light Gets In

It’s certainly one on its own this hard-to-find, Stockport restaurant with a get-what-you’re-given, daily changing, 8-course menu for £65 and additional wine or juice flight for £35. It can be a little bit intimidating and disorientating not knowing what’s coming or where you’re up to in the non-physical list of dishes to come, but once you choose to roll with it, it makes more sense. On my visit we were treated to dishes including cabbage with crab and apple, trout tartare, beetroot and hazelnut, plaice with salt baked kohlrabi, middle white pork and blood orange posset. But the highlight was poached pear with peasant cake, milk posset and buckwheat. It tasted like the sum of a number of heritage grains and wouldn’t have been out of place as a dessert centuries ago. The pears had definitely reached their fifteen minute window of ripe perfection. Deanna Thomas

“I have to admit, took us some time to figure out what to do with that lot,” said Pen & Pencil chef, Danny Broadbent, as he set down the parrot fish, flanked by artichoke crisps, rocket, fennel and braised cabbage in harissa. “…the last group only wanted a chilli.”

Broadbent was in the midst of being stitched up by his boss Dan Pollard, who, wanting to test out the kitchen, had not only organised a Ready Steady Cook-style evening (‘you bring the ingredients, we’ll cook the dinner’), but had also booked in a table of 30 half an hour before it kicked off. To the kitchen’s credit, they came up trumps, turning this mixed bag (I’ve still no idea where the missus got a parrot fish) into a very decent fish supper for four, elevating this mild flavoured, bony, iridescent little swimmer with garlic, jalapeno and lemongrass. Needless to say you can't order this from the menu, though you could have a go tarting up the fish goujans. David Blake 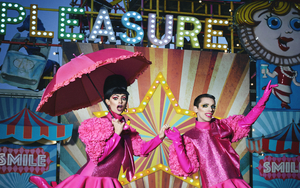