From saltfish fritters to Chinese pork buns - fantastic food you can buy for less than £3.50

Of course we could take the easy way out and fill this list with 99p burgers, meal deals and beige high street bakes, but that would be cheating. Instead, we’ve scoured the city to find the best, most delicious and independently made comestibles around.

Not only will you get something excellent to eat, you’ll even get change from your fiver to buy some more. In fact, if you bought one of everything on this list, it would probably cost you more in petrol.

Here's eight of our favourite super cheap eats from across Manchester...

(Have we missed out on your favourite? Let us know in the comments below and we'll give it a go)

This family-run Chinatown bakery was Manchester’s first when it opened in 1980 and is now run by the third generation of Ho's family. They offer a wide range of traditional Hong Kong-style sweet and savoury buns and filled pasties freshly baked on the premises every day. Confidential’s favourites are the roast pork buns; slightly sweet soft bread surrounding a centre of slow cooked char sui pork. Also highly recommended are the flaky chicken curry pasties and the honey buns which come in two variations; the sweet honey crumble mixture baked on the top or stuffed inside.

This little Caribbean gem has two branches; one on the Manchester/Salford border and another in Northenden. FLAVAS on Chapel Street is primarily a takeaway (you can order online for delivery or collection) but it does have four seats if you can’t wait to get stuck in. Everything is freshly prepared on site everyday including jerk chicken, long-simmered stews and curries as well as snacks and refreshing smoothies. It is well known for serving generous portions and for its reasonable pricing. You can get traditional beef, chicken or lamb patties for £1.40 each, a flat dumpling filled with jerk chicken for £2.80 (pictured top) or some of their famous saltfish fritters for only 60p each.

The family-run, traditional Indian restaurant has just opened a brand new delicatessen in Cheetham Hill which is open seven days a week from 10am-6pm. Finally, Confidential have found somewhere where you can pick up a tub of freshly made curry, a jacket potato with beans, a salad or a grilled panini, all under one roof. Their street food menu is full of incredible deals, but we recommend the Samosa chaat; a warm handmade lamb or veg samosa topped with a generous portion of chickpea salad with chopped cucumber and tomato, and drizzled with spicy mint yoghurt and tamarind dressings.

The okra fries at this vegetarian restaurant, renowned for selling top quality Gujerat-inspired street food alongside excellent craft beer, are great, but at a whopping £3.50 only just qualify as a super cheap eat. Bundobust have managed to turn this divisive and sometimes slimy vegetable into something crispy, crunchy and moreish. Their lady’s fingers are coated in chickpea batter and fried before being dusted with black salt and mango powder.

This thirty year old family-run Chorlton bakery and delicatessen sell so much more than bread - although they offer almost fifty types of loaves, buns and bagels. They also make specialist sandwiches on a dizzying array of bread options including rye, ciabatta, Vienna, bagel, or white, brown and granary barms. The Barbakan bagel bites (£2.30), toasted under the grill, are particularly good value, filled with a variety of toppings, from parma ham and tallegio to roasted peppers and hummus or feta and roasted tomato. On Fridays though they get the outdoor grill going and it's all about the Franks - with juicy German frankfurters served with caramelised onions and cheese sauce (extra 25p) for just over three quid.

Friday used to be cheese and onion pie day at this traditional British caff on Ducie Street, but it proved such a hit that they now serve their renowned homemade pie for just £1.50 everyday. This in itself includes pretty much all the necessary food groups, but if you’re lining your stomach for a heavy weekend or happy to spend the afternoon in a carb induced coma at your desk, then you might want to shell out another £2 for added hand cut chips and gravy.

Where: Café Maharba, 36 Back Piccadilly, Manchester

You’d get change from a fiver from any of the delicious slow cooked curries at this back alley curry canteen, but we really wanted to tell you about their fantastic naan bread, rolled out in front of you and slapped onto the side of their on-site tandoor. For only 80p you can get a delicious circle of carbohydrate bigger than your face. These are light and billowing, still warm from the oven, with the signature aromatic aroma of nigella seeds and a light scattering of freshly chopped coriander and a smear of ghee. Ignore the tatty signeage and the unassuming exterior and you’re in for a low cost glutastic treat.

Why are we including a flapjack in this list when you can pick one up from your average corner newsagents for next to nothing? They’re also made from pretty humble ingredients; oats, syrup, sugar, butter, so you wouldn’t expect them to cost a lot really. Well, we’ll tell you. It’s because the one made by the boys at Beastro is so substantial, a single one could probably sustain you on a voyage across the Antarctic. They also add cornflakes to the mixture which, although unconventional, adds a really pleasant crunch to all the stodge. It’s great, but incredibly sweet, and could do with a chocolate upgrade - but we’d be willing to pay an extra 10p for that. 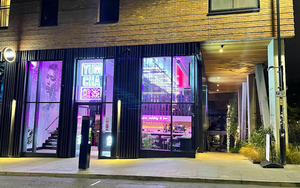