What do you get from the Michelin-starred chef, how much is it and how easy to prepare?

What - Simon Rogan at Home

Many people will probably have heard of Simon Rogan as chef-patron of L’Enclume, the Cumbrian restaurant housed in an ancient former smithy that holds two Michelin stars and five AA rosettes. He also headed up The French for three years (in which time Adam Reid was his second-in-command) and has award-winning restaurants in London and Hong Kong, all under the Umbel umbrella - a tongue-twister if ever there was one.

The Simon Rogan signature style is best compared to an enchanted pastoral symphony, but make it food. There is a dreaminess to the petal-scattered dishes that are often copied but never bettered, or at least the Michelin and AA Guides think so. Even Gordo was impressed .

Simon Rogan at Home began last year with deliveries in the South Cumbria area, including some by Simon himself in his own car on the first Saturday. The rest of Cumbria rapidly followed and now deliveries are nationwide. Obviously, it is going to be impossible to recreate the 11-course tasting menu of L'Enclume via your own kitchen but fans will be hoping for a taste of the magic nonetheless. 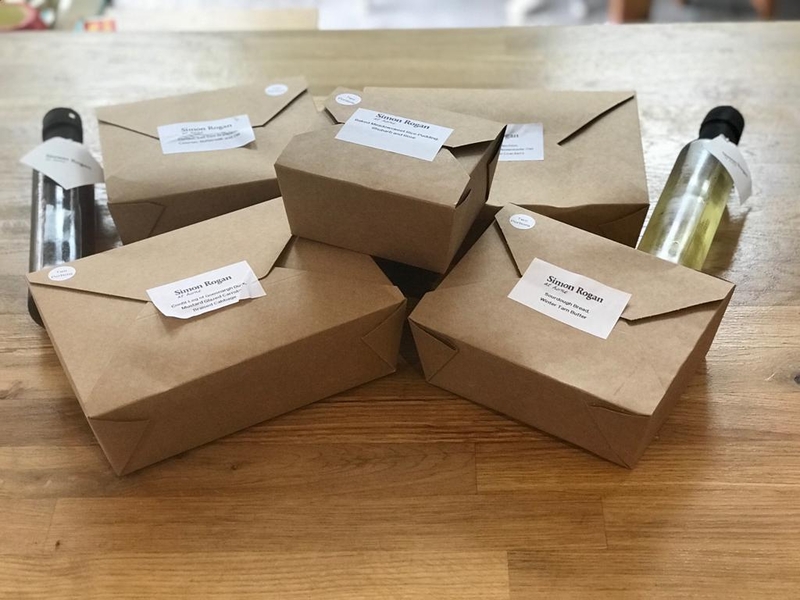 The Simon Rogan at Home box consists of a three-course seasonal menu that changes weekly, so while you might not get exactly what is described here, you can expect seasonal treats that draw heavily on the Cumbrian produce that supplies the majority of Simon Rogan's restaurants, including produce from his own farm. The box costs £150 for two (this includes a wine flight and cheese course), with an additional £10 delivery charge. Yes, that seems pretty pricy, but you get a substantial feed for the money, and when you think of the expense of planning an outing to one of Rogan's restaurants, in Cartmel, London or Hong Kong, then you might feel a bit better about the cost.

So - what's in the box? Our menu featured a smoked eel brandade on crushed celeriac with buttermilk sauce and dill oil to start, followed by a confit leg of Goosnargh duck with mustard-glazed carrots and braised red cabbage. There was baked meadowsweet rice pudding with rhubarb and rose for afters plus a package of three generous chunks of cheese with crackers and two matched wines.

There are 19 little parcels and pots for the three courses plus cheese and wine, which may seem like Christmas to some but a bit over-facing for others. The Simon Rogan at Home menu is not overly complicated considering the results but does make you feel like you are really cooking rather than just assembling.

If you are confident in the kitchen (and it is all just basic techniques) then that feeling of being in charge is actually a bonus – you could serve this up to a loved one and feel like it was a meal you had tenderly prepared for them rather than heating up a Lean Cuisine and trying to pass it off as your own by sprinkling parsley on top. Or, wait, is that the Sheba advert and I’ve got my 90s references mixed up? Well, that lady really loved her cat.

Of all the boxes I’ve tried, this would be my go-to for a special occasion at home for precisely that reason - it feels like I can take at least some of the credit and I don't mind sharing the rest.

The instructions are very clear and there is a video to help. You scan a QR code and a delightful country scene unfolds. One presumes we are in Cartmel, the Cumbrian home of L’Enclume, though the way the birds are really amping up the whole twittering business, it might just be some sort of fairy glade. Mr Rogan himself appears as your elfin guide through this culinary quest. The instructional video is about six minutes long so isn’t too heavy going at all. There's no particularly chef-y terminology to bamboozle, although I did wonder if the heavy simmer was heavy enough.

I won’t rehash all of the instructions here but I’d just note that frying your own confit duck leg might be the most challenging part for the nervous chef, but considering we were a couple of drinks in it all seemed to go swimmingly (apologies to that poor duck). As I have found with other boxes, it’s a good idea to read the instructions/watch the video well beforehand, as often you’ll be required to take things out of the fridge 30 minutes before you cook them.

It seems almost redundant to say yes. It was bloody marvellous. Maybe what would be more interesting is to say how it differs from the L’Enclume style. There are still the signature ingredients – dill oil and meadowsweet seem particularly redolent of Simon Rogan’s brand of bucolic fantasy – but it’s heftier and more muscular. It's kind of like seeing an off-duty ballet dancer in a chunky knit. Much more cosy and approachable, but you know there is an underlying elegance.

The eel brandade was a dish I particularly didn't want to stop eating. That lake of sauce as speckled-green as a mermaid's tail was the perfect foil to the firm-fleshed eel and the mound of creamy celeriac.

To accompany the eel we got stuck into the Clos Sainte Magdeleine Cassis Blanc, all helpfully explained by head sommelier, Valentin Mouillard. No he wasn't in my kitchen but the next best thing - a video played on the phone propped up against a vase, all while I nodded along in semi-comprehension - it did help to recreate the experience.

The duck leg was the kind of fleshy delight you want to gnaw every morsel of (apologies again to that poor duck) while the carrots had a savoury depth not often achieved by a snowman's nose. The second wine, a Newton Johnson 'Family Vineyards' Pinot Noir, was all succulent berries with a spicy finish, the perfect pairing for the meaty bird.

I wasn't expecting to be impressed by the rice pudding but it was lovely - pillowy grains of rice cocooned in cream. The only tiny niggle was the cheeseboard. I adored the Cote Hill Blue, made from raw milk, creamy and peppery at the same time. The hunk of Vacherin-style Winslade was a joy. I didn't love the Lincolnshire poacher as much and some of the crackers arrived, well, cracked. Not that this was a problem taste-wise, just a hazard of sending things around the country.

Now that we are easing (for some, hurtling) ourselves out of lockdown, it might seem that the era of the dine-at-home box is to come to a close. If so, then this was a high note to finish on. But now that we've got a taste for it I think this spoke of the Umbel empire will be going strong for a good while yet and indeed, Rogan has announced that these boxes will continue. I would love it if I could guarantee a trip to Cartmel every time I had something to celebrate but finances and their busy reservation diary means that's unlikely, even in 'normal' times. The joy of the At Home box is that it makes that magical little pocket of Cumbria more accessible to us all (if you have the funds), lockdown or no. 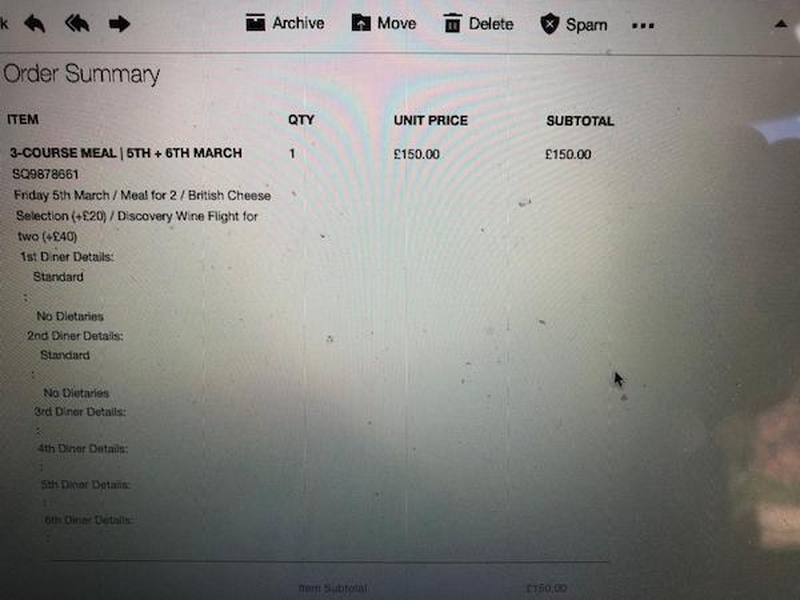 Instead, we’re giving you the scoop on some of the many delivery options that have sprung up. We’ll buy it, eat it - cook it if we have to - and let you know how it was. We’re not going to be scoring these ‘reviews’ - it doesn’t seem right at the moment - but we’ll let you know what you can expect and where's worth spending your money.