‘The menu is straight from the '70s and '80s’ - Locanda, Altrincham, reviewed

Jonathan Schofield doesn’t mind a bit of nostalgia, but only the good bits

I READ Locanda’s menu and put on my John Travolta suit from Saturday Night Fever and sang ‘You can tell by the way I use my fork I’m a Bolognese man, no time for talk.’

The restaurant sits on Greenwood Street in Altrincham close to the much admired and much copied market (probably another three will have opened in nearby towns by the time I finish writing this). Greenwood Street is the very epicentre of the south-western Manchester town’s ballooning food and drink scene.

The exterior of Locanda is smart in muted grey and sports an army of tables and chairs. The interior might be new but it’s old-fashioned particularly in the details, such as the design of the laminated menus. It only lacks wine bottles festooned with dribbling wax candles to complete the look.

The service was timeless however; lovely, attentive and concerned, with many of the waiting staff mature sorts for whom their job seemed one they were sticking with. Despite this the bringing of a board to the table with the evening’s specials was another out-of-fashion habit.

The menu is very much the traditional provincial Italian menu from the 1970s and 1980s and matched my suit perfectly. It needed more skill in its application too.

The funghi dei peloritani (£5.50), mushroom with cheese and crispy bacon, came with garlic oil but was strangely lacking in any sort of flavour aside from the overwhelming taste of overcooked mushroom. It looked horrible.

The polpette de nona lina (my granny’s meatballs, £7.50) was better, with a rich basil bouncing tomato sauce, decent shavings of cheese - but the meatballs were measly.

I couldn’t resist the spaghetti bolognese (£10) because it seemed to fit the mood of the place so well and because I hadn’t had one since my mother cooked them thirty odd years ago. My, oh my, was it big. My, oh my, was it heavy. I could only finish half and felt it in my stomach for about three days.

The cod eoliana (£14) was another gut-busting portion with a tomato and olive sauce. It was ok. Filling, but not as crushingly so as the spagbol. Locanda certainly doesn’t scrimp with the ingredients. I really liked a side of patate arrosto (£3.50) with bits of rosemary which had a cracking crunch.

Given the menu we had to finish off with a tiramisu (£3.50), but despite the festoons of chocolate buttons it was again empty of real flavour... where was the Marsala wine lushness?

There’s nothing wrong with being old-fashioned with a restaurant, sometimes it’s very welcome, but at Locanda the virtues of the service are not matched by the skills in the kitchen. Shame, because the restaurant appeals to a certain clientele - as the diners showed on a Saturday night. Indeed, one loud, multi-generational family table insisted they file an instant Tripadvisor recommendation as they dined.

Locanda is a million miles from Tre Ciccio round the corner (reviewed here). It’s not trying to be the same, of course, but I worry for it in that food-educated corner of Altrincham. I suggest it rethink its menu and make some concessions to the contemporary. I really want to put that suit in the charity shop. 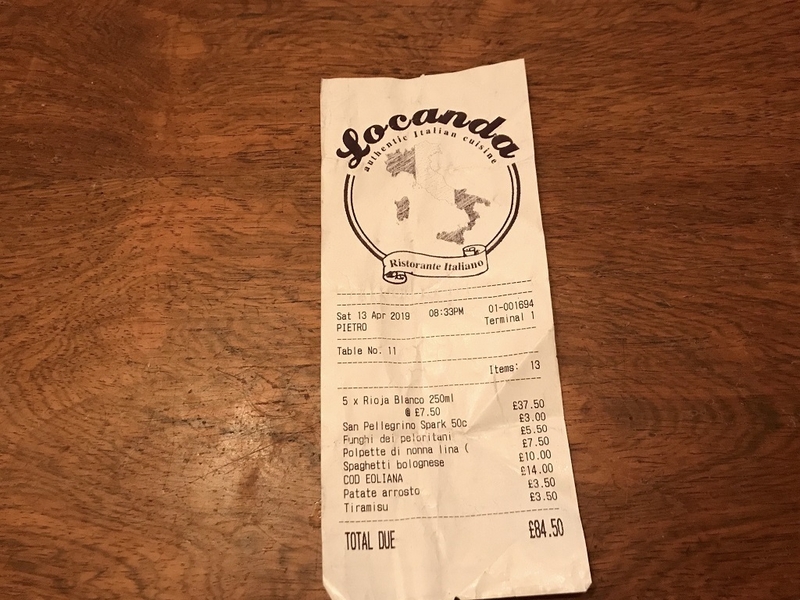