Out with the old, in with the new. On my way to review Hello Oriental, the latest kid on the Asian food block in Manchester, I found myself passing the old; the Yang Sing, housed in an Italianate Palazzo on Princess Street.

The Yeung Family, from humble beginnings in the middle of the last century arriving from Hong Kong and opening a small cafe, built a powerhouse restaurant empire with a hotel and spin-off restaurants across Manchester.

Sucking on this, I suddenly found chewy, sticky globules in my mouth.

Harry Yeung was the kitchen maestro delivering authentic Cantonese cooking to the region and beyond. The basement of the building on Princess Street was packed to the rafters every lunchtime and in the evening. There was always a crowd of people standing in the bar area, vying for the tables. Mahogany lacquered ducks and crispy belly pork hung in the window to the kitchen whilst trolleys of steaming dim sum were constantly wheeled between the tables. The cooking used to make London’s China Town as green as one-hundred-year-old eggs with envy.

The building is currently closed. Whilst it’s still owned by Harry and the family, it has the look of grim despair that precedes full closure. Let’s hope not.

Walking onto Oxford road and the newly built Circle Square, it took me a while to find Hello Oriental. It's a three-story inverted building. That is, a bunker. On the ground floor it’s an ice cream stall and bakery. There’s a spectacular stairwell corkscrewing down into the void with wooden slatted ceilings that guide you down into the depths of a very cool space, past a small, pretty, but ineffectual mini supermarket. There are far better in Chinatown.

The middle floor is, by all accounts, a Vietnamese restaurant. I passed it by, stumbling into the bottom floor, a neon-infested steel-caged food hall. Blade Runner without the rain. Tables with bench seating where hopefully, no one sits next to you - but they inevitably do.

There’s a QR code by your side on the table and we all know what to do with those, don’t we? I still got two sets of drinks by being stupid, but gave up trying to sort it out with the waitress. I decided to drink both. I didn’t as it happens but more of that later.

There are Chinese roast meats, bao, (very popular with the management; once you’ve got the bun right, the rest is easy and great profit margins). A respectable choice of dim sum, some noodles. Mains span Mongolia (that crispy lamb malarky, those fellas could never get ovens working in those yurts), a pork belly dish from good old Taiwan, fried chicken from the fried chicken specialists, Korea, and Japan, of course, gets to do teriyaki, in this case, salmon.

There are eight or so “signature" dishes.

Well, you know what they say, jack of all trades, master of none. I hope not.

I decided to order in three sessions.

At this point, something irritating struck me. Having made my first order, I was asked to give a tip - 10% and up. I’d not even had the service yet. When the food was ready, a bell rang and a nice person picked it up, walked three meters and put it down, efficiently, on the table. I’d paid my 10% already. On closer inspection of the bill, which was emailed to me instantly, I noticed an "administration charge” of 28p. I mean, WTF?? Ordering three times, I finished up paying 63p.

Next time I’m going to take cash and figure out a way of refusing the service charge up front and paying once I’ve had the service. As it happens, they would have got a tenner.

I only needed to try a couple of pieces off the “Hello Sushi” menu to figure out that side of things. Salmon sashimi (£8.95) was class. No gimmicks. Tuna Nigiri (£6.95) wasn’t as good. I’m not a specialist but I believe that this had been hanging about for 30 minutes too long. None of that slight stickiness to the rice. A little dry.

“Limited Edition” peppermint fruit tea (£3.95). I’ll never forget this. It came in its own beaker with a screw top, a hole through which you stabbed with a Magnum 44 calibre straw. I should have been worried. Sucking on this, I suddenly found chewy, sticky globules in my mouth. I had no idea what the hell they were. I won’t be having it again. I now know that if I get in touch with my gay side before I go on the big trip, I’ll be a spitter.

Black bean pork spare ribs (£5.45) were great; steamed, sticky, garlicky. Chewy. Har Gau (£5.95) top drawer. Big fellas as well. And then a revelation; Sheng Jian Bao, (£6.95) soup dumplings of exquisitely deep, umami flavours. Leave them for a few minutes, and take them whole, the top dome of the dumpling flavoured with the sticky-oozy soup. Bite down and a burst of hot sharp vinegar, then the seasoned steamed minced pork and the base, crunchy. Oh my. These were brilliant.

Crispy belly pork with rice and spring onion ginger oil (£13.75) was from a very lean pig. It was too dry. A small complaint, but fat does mean flavour. It was cooked well. I loved that side sauce.

I’m a right punter for crispy chilli shredded beef (£12.40); this iteration was bob-on. Sticky, sweet, hot, crispy, and beefy. They’re a treat when done right, and they are here.

You’ll have to ask someone else about the alcohol. It took me three hours to get over the peppermint tea "with fruit”. To be fair, I haven’t factored a score for that. It may be a delicacy in certain brothels in Macao. Don’t get me started on the paper plates.

I know the lads who delivered this experience; they have served Manchester well down the years and I’ve always enjoyed their food. This place is great fun. I do worry about the location. But it’s the place to be when Putin goes all cornered rat and starts lobbing nukes around the place. 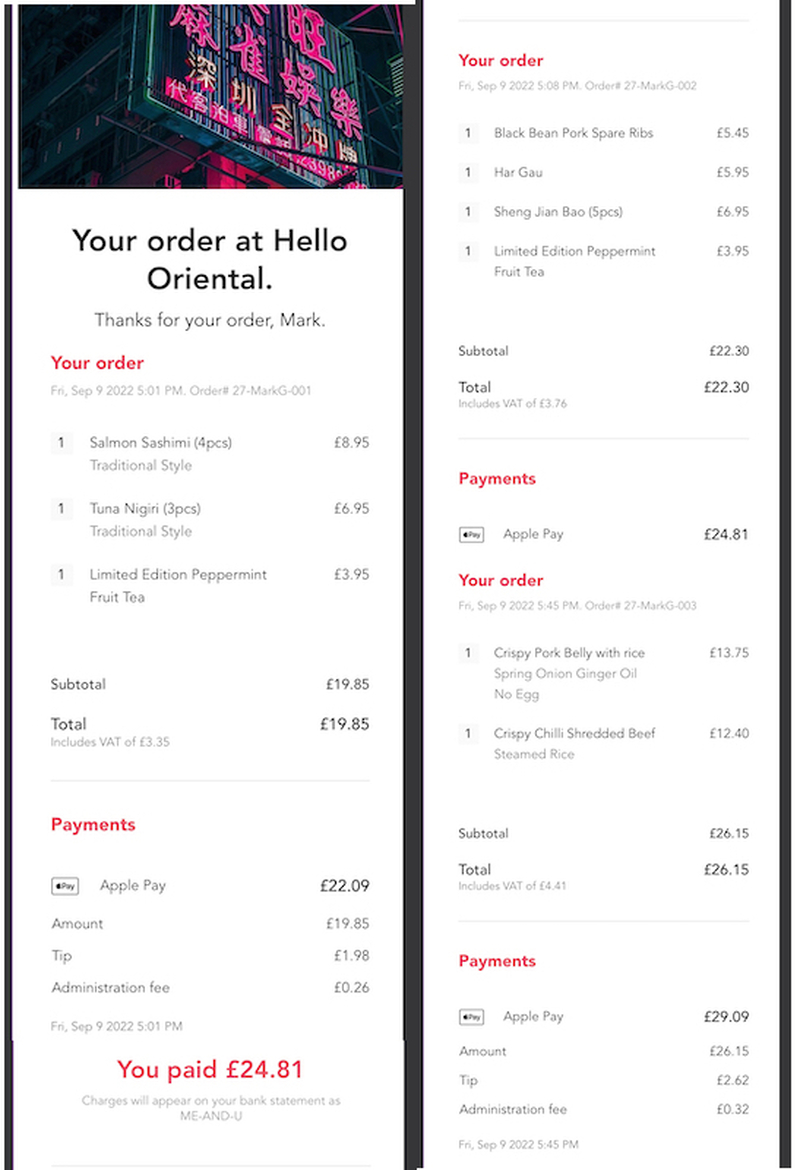