I’m not sure who Gourmet Burger Inc is aimed at, but it probably isn’t me.

Admittedly, I don’t eat burgers very often. The conditions have to be right to get me in the moo-d: I must be feverishly hungry, suffering from a touch of existential angst and, ideally, hungover. All of these boxes are ticked when I drop by on a Tuesday night with a mate whose burger-eating conditions are far, far less restrictive than mine. This guy has Archie's on speed dial.

Its candy-pink bun is dry as the Sahara

There's always room in my life for more of the gourmet though. Don’t get me wrong, I love a cheap rice and three lunch as much as the next Manc but my head is embarrassingly easily turned by ingredients like posh olive oil, smelly French cheese and fancy schmancy seafood.

Unfortunately, the descriptor ‘gourmet’ has been so overused that its meaning is now as empty as - well, as a burger place in Didsbury on a Tuesday night. Even the few ingredients on GBI’s menu that might reside vaguely in the gourmet stable are missing from the food when it arrives.

They might as well have called it ‘Temruog Burger Inc.’

In the early 2010s, Manchester enjoyed a burger surge. We were batty for patties, crunk for junk and… crazy about Daisy? Almost Famous flipped their first ‘dirty’ burgers in 2012 in a ‘secret’ NQ location becoming an indie junk-food success story overnight. They were flanked by the likes of Solita and Home Sweet Home, and a bit later Leeds based Red’s True BBQ (of donut burger fame) joined the herd. Four lads from a carwash in Cheetham Hill predated them all, opening their miniature neon-pink burger shack, Archie's, on Oxford Rd in 2010. Their empire expanded quickly thanks to the launch of Instagram and its users’ obsession with food photography and selfies syncing perfectly with their colourful burgers and interiors.

But a decade later, the burger fatigue is real. Any new bun-slinger on the block has to work extra hard to make folk bovvered about burgers. Is GBI going to change your life? I won't mince my words: no.

Exposed ‘brick’ walls, squeaky, teal pleather seating and a surplus of hanging light fixtures. It's all very ‘casual eatery.’ But the artwork is a bizarre hash of ideas. To the left of the (weirdly high) counter is a hand drawn mural of Yoda from Star Wars. To the right, a piece of old fashioned ‘wall art’ made of wooden bowls and vases.

Another section of the restaurant displays a tribute to the motorbike, with a mural of a bike smashing through a brick wall on one side and various Triumph and Honda number plates pinned to the wall opposite. Again, the target audience is unclear.

There are eight signature burgers on the menu along with 'chik'n', hotdogs, ‘munchies’, veggie and vegan options. A ‘Man United’ burger (£7.95 or £11.95 as a meal deal with chips and soda) - topped with caramelised onions, cheese, BBQ sauce, a hash brown and super fresh salad in a shiny pretzel bun - is decent although I’d have liked the option of a little less time on the grill. Sides of skin on chips and wedges are fine. There’s no booze on the premises so we slurp cans of ginger ale and diet coke but milkshakes are available too.

As intriguing as a bleedin’ beet vegan burger sounds ("It bleeds like a real burger!"), fake meat is often a big no from me, so I decide it's fairer to order something I might actually like. Sadly a falafel burger (£6.95 or £9.95 with fries and soda) in its candy-pink bun is dry as the Sahara - despite the addition of both hummus and tahini.

A side order of - the easiest win in the world - Cypriot halloumi fries (£5.95) also disappoint. A trickle of pomegranate molasses and light sprinkling of za’atar are a lovely touch but there are none of the promised pomegranate seeds - a ‘gourmet’ element that had inspired us to order them - and they have a texture not unlike upholstery foam. All halloumi is not created equal.

For most of our visit, this whopper of a restaurant is empty apart from us. Our server assures us it’s ‘packed on Saturdays.' In contrast - in case you think it’s unfair to judge the atmosphere on a Tuesday - the restaurant over the road is buzzing with customers as we head back to the metro station.

I'm not mad about Gourmet Burger Inc., but I’ve got no beef with it either. I guess I'm not the target market.

Read next - also in Didsbury: ‘A whirlwind of delicious smells’ – The Mad Giant, Didsbury, reviewed 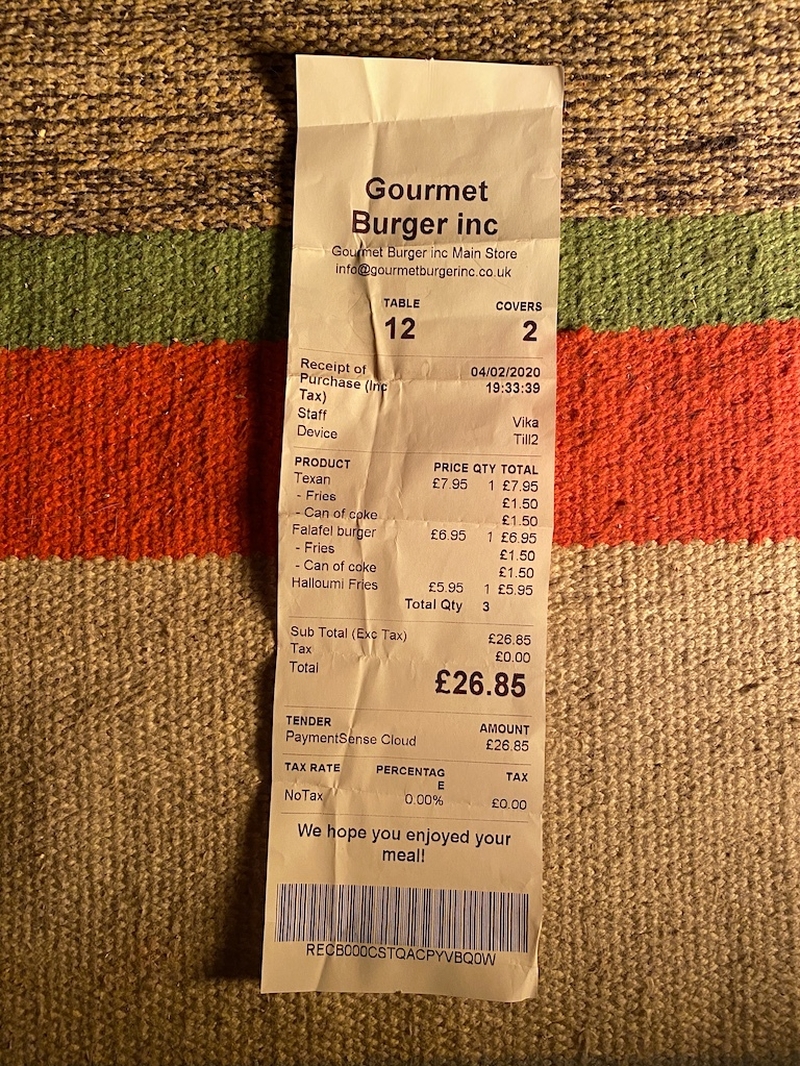