Gordo is dumbfounded by Terry Huang's skills - and business model

I’ve just experienced the best Japanese restaurant in the UK, outside London and very few people are likely to get to try it.

It serves just twenty covers - a month. You used to have to be a member to be in with a chance of booking one of them but membership is currently closed.

Is this the world’s most exclusive restaurant?

It’s as if I’ve been given the Kool-Aid cure, booted down a wormhole and dropped into happiness.

Remember Umezushi? The Japanese restaurant under the railway arches near Victoria Station. A bugger to get in, truly great wines, the ingredients simply the best.

When watching the brigade of three working with silent purpose, treating seafood with exquisite respect, I wouldn’t have been surprised by a crown of thorns sitting atop a hat stand on the way to the loo.

Chef Terry Huang, after some weird stuff (Chish and Fips?) has spent lockdown figuring out what he wants to do with the place and how to do it. And it’s very bloody weird indeed.

Chef Huang’s Umezushi Omakase is different to any other restaurant in the UK; It’s quite likely that the only other places like it are in Japan. He’s introducing the spirit of Omakase to Mancunia.

Arrive on time - 7pm for us on a Saturday evening. Part a couple of welcoming flags to walk down a tiny wooden hallway into the room. It’s gently lit. There are a couple of holding tables. The old kitchen is still there; with four seats facing it.

Terry Huang peers around the side, “Hi, come over and take a seat.” There’s something strange but wonderful about this. It’s as if I’ve been given the Kool-Aid cure, booted down a wormhole and dropped into happiness. This is a brigade of one. There’s only Terry here.

I did this experience twice because I wanted to make very sure I hadn’t dreamt the whole thing up. I needed witnesses.

On the first visit, I was given a tiny woodpile of six baby asparagus tips, handed over the pass directly. It was a near-religious experience. I was eating asparagus for the first time. Tea, brewed with plums was a magical match for the asparagus. I actually had thirds.

In front of us now is a box of thick cuts of fish: sea bass, sea bream, tuna, yellowtail, spotted Canadian prawns, tiger prawns. I’m not going to detail slavishly the order of service and descriptions of each piece, there are about twelve servings.

Some cuts are dry-aged in salt, stored in a purpose-made fridge. One is aged with the scales left in place to echo the flavour back into the flesh. All are wrapped in their own damp cloth and changed daily.

The sea bass on the first visit was on its tenth day of the dry ageing process; one serving cut from the belly, then what I would call the sirloin and finally the collar behind the shoulder. On the second visit, the other side of the same fish, with another week in the salt fridge. The slim, smooth lozenges lie on your tongue like a lover in your lap. They’re a whole, multi-sensory experience of flavour and texture.

Some of the cuts are served skin-on, scored with great precision, then wafted with a blow torch for maybe three seconds. This wakes the fats up, setting free deep flavours that I never believed could be tickled out of a simple white fish.

The first five or so portions are sashimi, then sushi. Slices of ginger half the width of a pound coin, cured in fruit vinegar, so spectacular on the palette they keep refreshing my head, getting me ready for the next wave.

Watching Terry handle the rice nearly hypnotises me. There’s a certain symmetry to the way he works with walnut-sized nuggets; a pressure, a little bit of love.

I chat with him about his sushi rice. After 45 years of getting my rice ready at home for a chicken curry, I come to realise that I know precisely fuck-all on the subject. Terry’s sushi rice seems held together through quantum mechanics. An entanglement. Someone, somewhere in this universe was eating that very same piece of sushi as I was. The lucky bastard.

There’s a Marmite moment with the sea urchin. Two of my guests are unimpressed. Their taste, not Chef’s delivery. The sandwich of sea urchin, scallops and Oscietra caviar all wrapped up gently in a sheet of seaweed, offered by Terry like a stork gently delivering little fat blushing babies, nearly did for me.

Canadian spotted prawns with dabs of wasabi seasoning have been delivered the previous day, live. King prawns might be considered a bit loutish in this company. Even the salmon has been aged for five days, then refreshed with boiling water to open the pores and bring the pieces to life, so to speak.

A short flight of Sake (£30) has me interested; I’m a complete novice, but it’s got me opening up some dusty books on the subject at home.

This latest Iteration of Umezushi scored higher on this critic’s sheet than any other Asian restaurant outside London. It’s rumoured that the current Michelin starred Sushi Master, Endo at the Rotunda, is on his way.

About Omakase, it basically means leaving it to the chef. It’s a matter of pride for a sushi master to deliver an experience that he thinks is right. Terry delivers this in spades. It'll cost you £80 a head.

Chatting with him as the meal goes on, I ask why he’s open only once a week. Why is it so difficult to arrange a seat? I know it’s going to wind people up. It’s a mad business model. And I never want it to change.

“I don’t want to cook for people I don’t know,” he says. He smiles at me, “If you recommend someone to me, Gordo, I’ll consider them”.

Get in the queue folks. 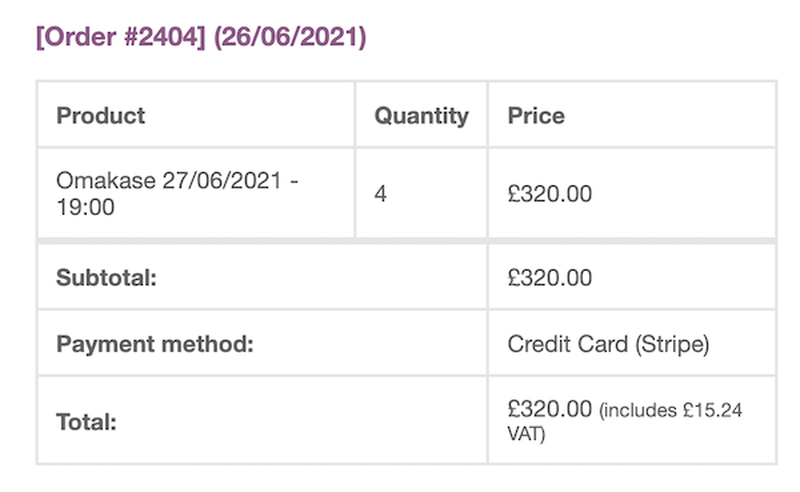