Curiosities in the city: an alternative tour of Manchester (part three)

MANCHESTER has a lot of the weird and the wonderful about it. Often though, this is easy to miss. So here’s a guide to eight more curiosities to be found around the city centre. You can see parts one and two here.

Tripe was once a glamorous food and replaced chops. This Lloyd’s Bank on Market Street started life as the United Cattle Products restaurant. That element of the building which protrudes close to the roof line lays in front of what was the ultimate in big dining: the banqueting suite. This is from the MEN's article covering the opening in 1964:

‘Soft music and pleasant surroundings induce a relaxed atmosphere. Dominating the cafeteria is a giant panel depicting a country landscape with trees, fields and a river. Immediately beneath is yet another unusual feature of this ultra modern premises, a fountain and miniature waterfall in a natural rock setting with artificial flowers and ferns. One of the most impressive highlights is the banqueting suite on the top floor. Most of one wall has been faced with Westmorland Green Stone, while on the other side of the large dining room is a wall covered with blue animal hide. Just off the main dining room in the Coniston Suite is a reception room with a bar; the dance floor is of maple wood and the lighting is housed in ceiling recesses.’

All this for munching on the stomach lining of cows. Tripe was the smart way to go. Sam’s Chop House, which had been on the site since 1872, had to move for this new building and ended in its present location on Chapel Walks.

In the costly £3.75m Link building between Manchester Central Library and the Town Hall Extension you'll find a reminder of the Peterloo Massacre, that famous 1819 event when Manchester took centre stage in the fight for democracy. Director Mike Leigh has now turned the epic occasion into a movie of fourteen hours (or something like that) - some people wish he hadn’t bothered.

In the Link building there are Lancashire roses copied from a design in the nearby Town Hall, a building currently under refurbishment for a million years (or something like that). In the centre of fifteen of the roses are the names of the fifteen dead. One of those is John Lees (main image), who had also fought at the Battle of Waterloo four years earlier. It was the fact that both assailants and protesters had fought for Britain at Waterloo, plus the proximity in time to the battle and the location of the protest at St Peter’s Fields which led to the name 'Peterloo'.

The names are a poignant reminder of how the fight for the vote seemed a matter of a life and death. People who don’t vote dishonour the dead of 16 August, 1819.

Pavement hints and death in the square

It was an elegant church, designed by James Wyatt, but by the early-1900s its only congregation was of the dead. So it was demolished and a cross by Temple Moore put on the site. Now the church has come back in the form of stencil-like shapes in the new paving at St Peter’s Square. Underneath and around lies a crypt wherein some of Manchester’s previous bigwigs lie sepulchred in a concrete raft with trams rattling their bones.

One of the dead down below is the man who led the yeomanry at the Peterloo Massacre (see above), Hugh Hornby Birley. He was a mill owner opposed to Parliamentary reform. His factories still exist - reinvented as apartments – between Oxford Road and Cambridge Street. His church was St Peter’s. The first fatality of Peterloo was William Fildes who was killed very close to the walls of the church, when he was hit by a yeomanry man on horseback. A decade after charging unarmed citizens with a drawn sword Birley supported the campaign to grant two MPs to Manchester and one to Salford.

Birley was buried in the family vault at St Peter’s Church in 1845 along with his wife Cicely, who had died two years earlier, and a three year old son Edward, who had died in 1839. In a manner of speaking he has never left Peterloo. The columns of the church - salvaged from the demolition - now hold up the rear terrace of the Belle Epoque restaurant in Knutsford.

Ah the British construction worker, what would we do without him? Especially in Manchester, although of course the construction worker is as likely to be Eastern European as British. As a building, Number 77-83 Piccadilly by Clegg and Knowles from 1877 is a crazy mix of styles, for what was usually a conservative architectural practice not prone to such excess.

There are strange, almost domestic elements to this former textile warehouse, such as the Tudorbethan turrets and gables that could be part of a cotton magnates house in Victoria Park, Ellesmere Park or Whalley Range. It’s an entertaining building with, right at the top, two very entertaining elements. Here lazily leaning against a parapet wall are two workmen, looking very bumpkinish. They look very content and as a decoration are proper charmers.

Yea, yea, it’s a big lump of a thing, but I like the former Piccadilly Plaza complex, now City Tower and the Mercure Hotel. The whole thing is Brutalist beyond brutal, but was a truly monumental project from 1959-65. There are three vertical elements, skyscraper, hotel, and office block laid out on a huge podium that once incorporated a shopping centre. Some said this was a nod to the trinity of Manchester Town Hall, the Town Hall Extension and Central Library, although as one architectural guide puts it: ‘The group, instead of reading together, has always looked desperately disparate. It completely fails to take account of its surroundings, but the sheer confidence and scale impress.’ Indeed.

The complex can also lay claim to the two tallest decorative elements in the city; one external and one internal. City Tower sports a racy and original decoration in moulded concrete of computer circuit boards (Manchester was and remains a leader internationally in computing following on from the pioneering ‘Baby’ of 1948).

Meanwhile, climbing through several levels in the stairwell of the Mercure Hotel is a 1960s resin artwork by William George Mitchell that matches the optimism of the age, and its brutal disregard for anything that had gone before. Mitchell has created phoenix-like imagery combined with an odd fantasy city out of bottle tops, a smashed up piano and various other bric-a-brac. It’s as mad as a fish but very entertaining.

Smelly and covered up reminder

Hanging Ditch bends in front of the Corn Exchange. The name refers to an artificially and widened existing watercourse (well, probably) that joined the River Irwell in a sort of cataract – hence it hung above the river. This was one of several ditches dug by the Anglo-Saxons when they settled in the area and moved Manchester from the abandoned Roman fort at Castlefield. The fort was too big for them and too difficult to defend, so on cliffs at the confluence of the Rivers Irwell and Irk they settled instead, digging ditches between the two rivers to defend themselves.

Chetham’s Library and School of Music lies where a little fortification would have sat. Hanging Ditch was the last ditch they dug and remained a physical feature until the late 1700s because it had become a convenient dumping ground for all sorts of horrible filth. Indeed, during the process, several tons of dead animals were found which some wily entrepreneur rendered to dripping and sold on the market place.

The medieval bridge over Hanging Ditch, composed of 14th and 15th century elements,  linking the church with the market place was presumed demolished. Then, in the nineteenth century during building work, it was found once more, people were charged to visit it. Then more building work sealed it away again, until the early noughties when the bridge was finally and permanently exposed. This can be seen, next to Hanging Ditch wine merchants and underneath Propertea; a reminder of a time when Manchester was a miniscule and insignificant town waiting for its moment to come along.

A cartouche to Mr Opium

Where John Dalton Street meets Cross Street was once a very handsome townhouse of the eighteenth century. It disappeared in the early 1900s, the victim of a scheme to widen Cross Street from the 'Improvements Committee'. The present building by Charles Heathcote was erected for an insurance company shortly after. It’s now a bookies with apartments planned above. On the wall of the building there’s a handsome and universally ignored cartouche (a carved element framing an inscription) declaring the site to be the birthplace in 1785 of one of Manchester’s most mercurial authors, Thomas De Quincey.

Thomas Quincey, later De Quincey, a far more literary version of his name, was a weak, sickly child with a brilliant academic brain. He is chiefly remembered as an elegant essayist and is best known for just about the earliest work of Western ‘addiction literature’, Confessions of a English Opium-Eater, in 1821. He became an acquaintance of poets Wordsworth and Coleridge, and lived for a time in Dove Cottage in Grasmere, one of Wordsworth’s homes. He died in Edinburgh in 1859. The Manchester Guardian wrote that year: ‘With the departure of Thomas De Quincy almost the very last of the brilliant band of men of letters, who illuminated the literary hemisphere of the first half of our century with starry lustre - differing each from each in glory, but all resplendent - is extinguished.’

De Quincey’s attitudes to Manchester changed through life. As a boy at Manchester Grammar School he’d hated the place. Later in life he wrote, ‘In Manchester there is more interesting conversation, as much information, and more eloquence in conveying it then usually to be found in literary circles or in places professedly learned.’

It’s one of the traditional landmarks of the city. The Refuge Assurance Company’s tower on Oxford Street now bears the neon branding of the Principal Hotel. The original building from 1893, at the corner of Whitworth Street and Oxford Street, was by the Mr Manchester of 19th century architecture, Alfred Waterhouse - designer of the Town Hall, the main Uni block, Strangeways Prison and many more.

The building was extended in the years before WWI by Alfred’s sons following his death, and it was they who designed the tower. The result was a huge building which attracted the most colourful description in the city’s architectural history. Writing in the Manchester Guardian in 1924, CR Reilly described it as resembling ‘a tall young man in flannel trousers escorting two charming but delicate old ladies in lace’.

Reilly is referring to the extravagant tile work and the strong verticals of the tower which also carries some very handsome and very large clocks. Herein lies the oddity. The clocks do not have numbers, they have Manchester bees. The bees at the quarters have their wings open, the others their wings closed. Given the tower is 66m (217ft) tall those bees must have been the biggest in the city until the recent Bee-in-the-City event.

Don't forget to read parts one and two of the alternative tour of Manchester.

What you say
Got an account? Login, to comment/rant.
0 Opinions
Read Next
● / Arts 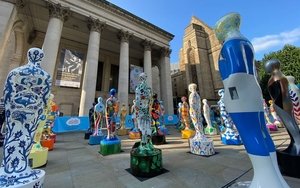 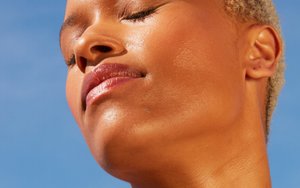 Where can you buy all the best beauty products for every skin type and every style?
Web Design Manchester MadeByShape