Back To Reviews
● / Wine

What’s in a (hotel) name? Juliet might ask if she were contemplating date night in Manchester.

The Midland, which houses both The French and Mount Street Dining Room, is named for the railway company that built it to serve the former Manchester Central station. The Edwardian, meanwhile, home to Peter Street Kitchen, is named after the hotel parent group. Not particularly inspiring but understandable. The Stock Exchange Hotel, home to Tom Kerridge’s Bull & Bear, also nods to a past life.

The Alan has done the impossible and made cabbage sexy. No mean feat.

And then there’s The Alan. Named after, well, you’re going to have to read on, aren’t you?

The Alan, Manchester’s newest luxury design-led hotel sits opposite Manchester Art Gallery on Princess Street. If you didn’t know it was there you might assume it was an office building and walk past. Inside, touch sensor doors open to a buzzy foyer with a bar to the left and a restaurant with an open kitchen to the right. Seating across both.

If you enjoy interiors, go to The Alan. It feels different, a much-needed departure from fashionable Scandinavian minimalism. There’s heft and chunk to everything in the restaurant without sacrificing comfort. Open brick provides a contrast to the pale industrial chic of concrete and marble tables. A terrazzo floor of speckled colour made from construction offcuts spreads out beneath cushioned Rattan-backed chairs. Very Jacquemus.

On a Tuesday night, the protocol upon arrival is slightly confusing with nobody occupying the front desk. Thankfully waiting staff spot me languishing and direct me to my table next to the door. It’s a good spot for people-watching, and me and my dining partner invent a fun game for the evening called Pair or Affair.

We order a cocktail each, a signature hazelnut & cacao Old Fashioned and a classic French 75 (both £10) to accompany menu perusal and settle in.

The menu is meaty. Split into light bites, small plates, sides and desserts, it takes a bit of time for us to work out a route through. We decide upon a deconstructed roast of sorts. A Gatehouse Farm lamb Barnsley Chop (£23), free-range and naturally reared courtesy of Littlewoods Butchers, with an assortment of small plates - all to share.

We choose a bottle of Lebanese Musar Jeune Red (£36) from a wine list that is £42 at its most expensive. There’s an argument to be made here that, along with a cocktail menu brimming with signatures and classics, The Alan is a good drinking spot for the nearby financial infrastructure of St Peter’s Square. That is if they clock where it is.

Potato and ox cheek (£6) and Polyspore mushrooms (£7) arrive first. The former is intriguing. Thinly striped terrine sandwiched between thicker crispy potato, beads of pickle and mustard on top. I search my brain for a tasting note and land upon the mustard and gherkin of Big Mac (by no means a bad thing) but with welcome potato crunch. It doesn't hit like the other dishes but it's still enjoyable.

Barbecue Polyspore mushrooms are great and the team in that innovative DIY space in Altrincham will be proud of how their produce is being used here. A variety of mushrooms, sat in a bowl with a racing stripe of tar-like, Marmitey yeast and plenty of black garlic. Deep earthy flavours presented beautifully with a subtle tobacco taste from the grill. “Mushrooms are the future, aren’t they?” says my dining partner. They will be if given more starring roles like this.

The Barnsley Chop follows. A brutalist structure of meat. A National Theatre of lamb chunks, all individually cooked to perfection, pink where they need to be, the fat with a bit of chew to it. As is tradition. My only criticism is the plate it arrives on takes up a quarter of the table and leaves the chop itself looking a bit marooned.

Lamb fat cabbage (£7.5) and broccoli (£7) accompany the meat. The cabbage is buttery and indulgent with shreds of lamb and the fragrance of rosemary ricocheting up our noses when set down on the table. A friend described it as addictive and I can see why. The Alan has done the impossible and made cabbage sexy. No mean feat.

Whilst the mushrooms are formidably earthy, broccoli draped with ribbons of pickled broccoli sits atop a vivid green puree that hums with freshness and chlorophyll. Chunks of lamb are used to scoop up any lingering dollops of the smooth green puree and the roast is complete. They’re not doing flavours by halves.

Staff are keen to hear our thoughts on the dishes and although repetitive, multi-person checking up throughout the meal might be tedious for some (minor issues that’ll no doubt be ironed out over time) the enthusiasm is welcome. There's a slight issue with the flow of the space as it multi-tasks as hotel foyer, bar and restaurant but again, if the staff are on top of making sure nobody who enters is left stood awkward turtling for too long, this is something that can be easily improved.

We ask a member of staff what the room is scented with and like a flash he’s back with a written reference. Alan wears Patchouli Blanc. We ask why the place is called The Alan. But first, pudding.

You say dessert, I’m saying pudding. If I see an Arctic Roll (£9), I’m getting it. Whether it’s on a menu or in an off-license fridge. Stood vertical on the plate, cosplaying as Stargate SG-1 meets The Secret Garden, it tastes exactly how I hope. Vanilla parfait in the middle instead of ice cream, that familiar cakey outer layer. Berries on the plate and in the sorbet upgrading that familiar hit of jam sweetness with the tartness of fresh fruit.

We order a Platinum Trifle (£8) too, my only acknowledgment of the regal this month, and it arrives with glorious pomp. A tall Martini glass crowned with fresh strawberries, vanilla and strawberry striped down the glass with the consistency of angel delight. Again, pudding not dessert. Playful, slightly over the top and wonderfully creamy with shortbread for scooping.

The Alan is very cool. Cool without trying to chase footballers but also cool without reading Kinfolk magazine. It sits in between the Grey Goose sparklers of Deansgate and the stripped-back Scandi tropes of Ancoats. It’s exciting. As exciting for a drink as it is for a small plate date night. It’s going to cost you, maybe even less than nearby luxury hotel restaurants, but if you’ve got the dosh you’re going to be satisfied.

What’s in a name? Nothing, when a place is this ambitious and confidently self-assured. As for why it's called The Alan? Don't worry about it. 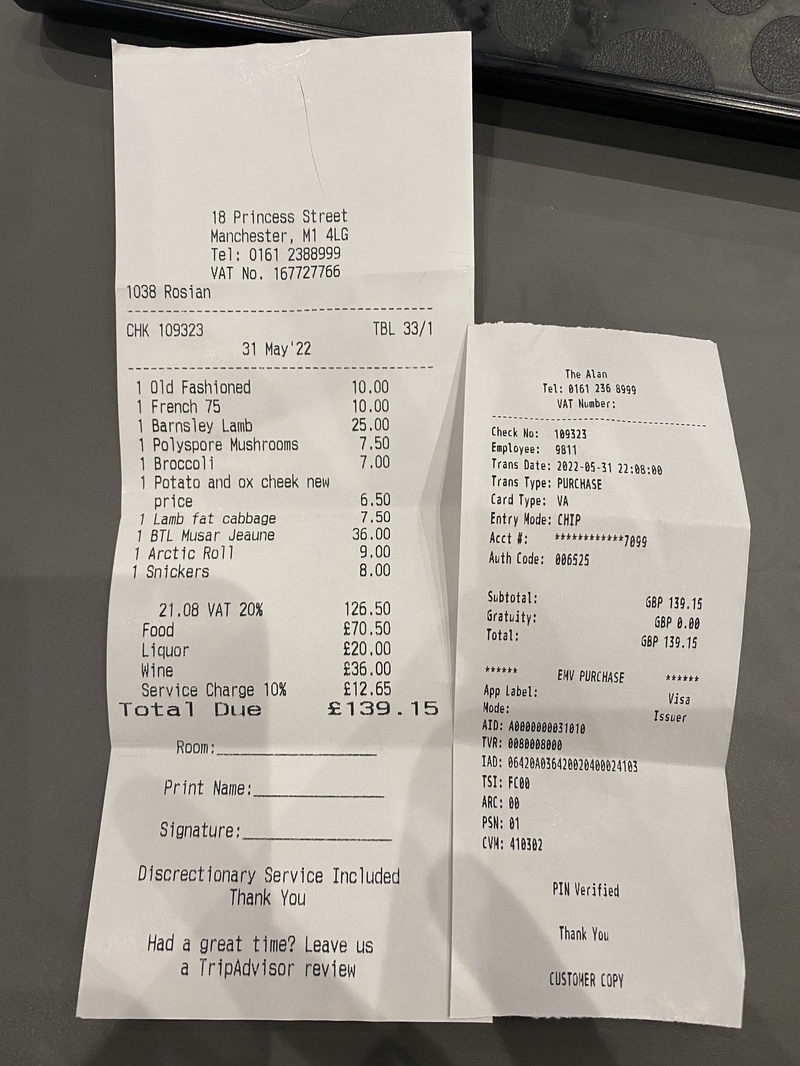 An insider’s guide to eating and drinking on Chapel Street, Salford
What you say
Previous Article Next Article
Read Next
● / Mediterranean