Ever since Nobu became hugely popular in the nineties and early noughties Japanese cuisine has signified fanciness in the West. Part of its success was down to the fact the hedge fund guys liked how expensive it was and the models they dated would actually eat the sashimi, as it wasn’t too calorific. It’s a template that hasn’t been copied as much recently (perhaps because hedge funders are out of fashion and models are all plant-based these days) but as with everything from 'the aughts', it looks like it’s making a comeback.

To bring things up to date, Peter Street Kitchen (the new restaurant at the Radisson Edwardian hotel) has focus grouped its way to a Japanese/Mexican fusion version of Nobu. The obvious concern is that the powerful, deep flavours of Mexican food will overpower the austere and delicate notes of Japanese food. Luckily it’s not a fusion per se but more a side-by-side selection of small dishes. This is where it gets a tad confusing. Should I pick all Japanese or all Mexican. Should I mix and match? Are the dishes that are significantly more expensive than others larger or are they just show-off pieces? 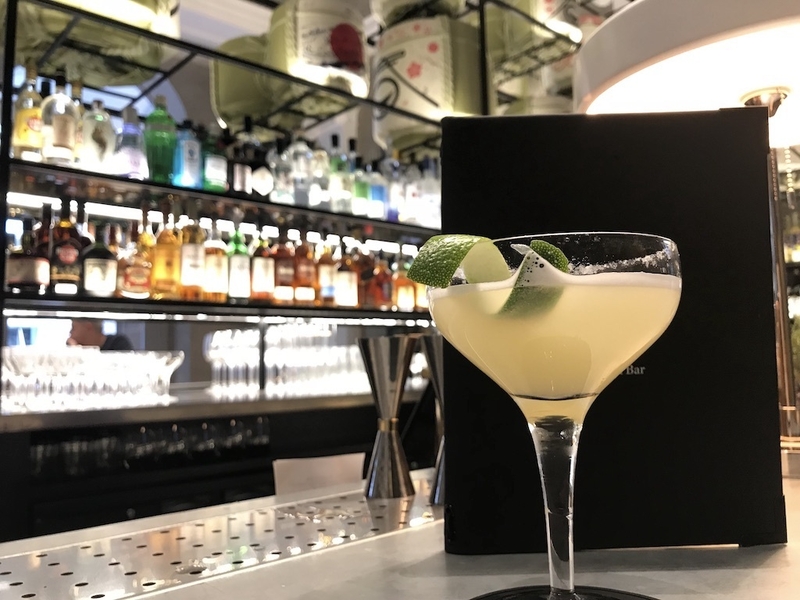 There certainly are some nice details in the newly fitted space, and not just in the decor. Take for instance the giant ice balls in my whisky highball (Suntory chita,  £11.50). While these look like fun novelty Deathstar-shaped ice cubes, ice ball carving is in fact considered a bit of an art in Japan and the larger size means they melt less quickly, diluting the drink less. The rest of the cocktails have fun with Japanese flavours from peach blossom to plum sake, including a ramune spritz (£10.50). Even business cards are displayed in the small cedarwood boxes that are traditionally used for drinking warm sake so as to infuse a hint of woodiness into the drink.

The vibe is of a very upmarket spa – unthreateningly luxurious, designed to soothe and coddle the senses. The service too is very spa-like, with all needs anticipated. The barman, for instance, sensed before I did that there was something up with my cocktail just from how I was drinking it. He scooped out the extra Deathstar that was annoyingly freezing my nose and the drink was instantly improved.

One thing I shouldn’t have worried about is the ability of Japanese food to stick up for itself. While this is the cuisine that might be best known for its purity and restraint, it is also the nation that invented Pocari Sweat, wasabi peas and the fried noodle sandwich. It can hold its own.

Indeed, the edamame beans (£6) we start off with as a nibble pack a punch, coated with lemon and chilli that is just the right side of explosive. The yellowtail sashimi is doused with an overly spicy yuzu soy that disguises the delicacy of the raw fish (this is in itself is a Japanese take on tiradito, or Peruvian raw fish ceviche, pioneered at Nobu).

The Mexican shredded crab tostadas (£7) seemed positively polite in comparison. Then the salads arrived – piles of quite ordinary leaves hiding little slugs of either duck meat in the case of the crispy duck and pomegranate ensalada (£8) or shreds of salmon skin that made me feel more like a polar explorer down to his last scraps than someone who had just ordered a posh salad (crispy salmon skin salad, also £8) .

Next came the king crab tempura with ama ponzu (a double-take-worthy £26, I told you there were some show-off dishes) another Nobu classic. Ponzu is best described as a citrus-y soy vinaigrette that tastes great with many things, especially fish. The crab tempura were lovely and fresh but only as lovely as some proper scampi, to be honest, and being doused in large amounts of ponzu didn’t necessarily show off the crispness of the tempura.

As usual with small plates, just when you think you’ve finished the last few stragglers surprise you. In this case it was a mushroom and truffle toban-yaki (£10). ‘Toban’ is the ceramic dish it is presented in and ‘yaki’ means fried. Basically it is cooked mushrooms doused at the last minute in an extremely concentrated savoury broth. If a space ship was sent from Earth with samples of the five basic flavours to instruct aliens on how earthlings eat, I would recommend including a test tube of this as representing everything that is umami. The mushrooms were good though.

Just when I thought my mouth had been through enough the mezcal-glazed smoked ribs (£8) arrived. I’m not a spice wuss, but these had me beat. Maybe I just didn’t want to wash them down with the delicate warm sake (£10) or refined Riesling (£8.50/glass) we had been enjoying, although a pint of Asahi might have done the job. My companion loves that sort of thing though, and he hoovered them down. Looks like Mexico won this round, Japan.

After all this flavour power play it was a welcome contrast to find some subtly in the desserts list. The koru goma cheesecake (£7) may look like a pat of wet cement, but the toasted not-quite-hazlenutty aroma of the black sesame seed pairs beautifully with the delicate citrus pop of the hassaku orange sorbet that accompanies it.

So, I couldn’t find fault with the service; the staff seemed to have been on some kind of ninja hospitality training course, and were faultlessly lovely. The atmosphere is as slick and luxuriantly bland as you’d want a hotel bar and restaurant to be. As for the food, if your taste buds are as bombproof as your expense account, then you’ll probably love it.