Deanna Thomas, Gordo and the editor applaud an unshackled chef leading a re-revival

THE STORY so far: in 2013 The Midland Hotel embarked on a massive makeover of both restaurants, The French and the rebranded Mr Cooper’s House and Garden, forming a management deal with chef Simon Rogan in the hope that he would bring some Michelin-starred magic to Manchester. This was not to be, the iconic French restaurant was overlooked twice for a gourmet gong, leading to the premature departure of Rogan, who decided to concentrate efforts elsewhere, three years into his five year contract.

However, it has been Manchester-born chef Adam Reid heading the pass day after day, with Rogan in a more eponymous executive chef role making only the odd guest appearance. The Midland has decided to use Rogan’s departure as an opportunity, promoting Reid and renaming the restaurant after him: “This is a huge opportunity for me to showcase my own cooking style," Reid told us recently during an interview (here), "I want to make Manchester proud and ensure that The French will continue to evolve.”

So now The French has re-adjusted, undertaking a rebrand and a relatively minor refurbishment to suit its ‘new’ head chef, what has changed? And if it failed to charm the stars out of Michelin before, could it now? 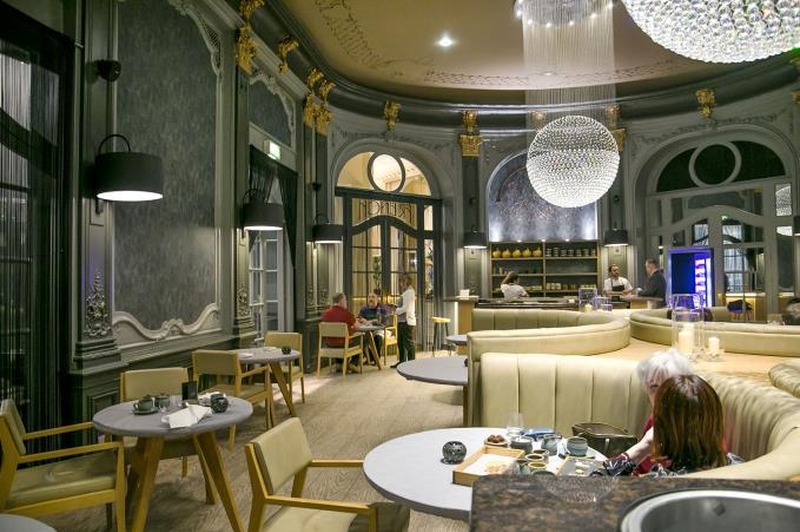 Diners enter through a draped-off lounge area with its own reception, creating the illusion of an independent restaurant rather than one shoe-horned into a bustling hotel. A stylish open prep counter by the entrance sees chefs calmly assembling cold dishes. There’s only so much that can be done to the Grade II-listed room, but remnants of the Rogan era remain such as the rainbow crystal chandeliers and the wood-effect carpet.

Walls are ‘urban’ dark grey, rendering time redundant in the windowless room – dangerous with that wine list. The wooden tables have been upholstered with pale grey covers and the atmosphere softened by background music from Reid’s own playlist. It’s not intrusive, only noticing it sporadically when a ‘tune’ came on - The Doors were playing as we sat down and The Beatles sang us through a few courses – it just takes fine dining stuffiness down a notch or four.

Fine dining it still is, as proved by the tasting menu, most dishes of which can be ordered independently in small or large dishes.

Despite Rogan’s reinvention and the foams and the frippery and the chairs and the massive pair of blinging googlies hanging from the ceiling, those musty inspectors still found Manchester’s most revered restaurant lacking. The shortage of a toilet (until 2015) probably didn’t help. Given the average age of a Michelin inspector, access to a khazi in under 30 seconds is no small matter. Hey ho. Better now that Reid – who despite the name above the door has long been the most important cog in this operation – throw off the shackles of the star-gazers and concentrate on cooking for his customers, not for some moribund tome.

So to the food, which was remarkable, and explained here by Deanna (an actual trained chef) with more prowess than I could ever muster. Though I really couldn’t leave without a few words on that broccoli, tender-stem and fried, served with a fluffy cheese mousse ponging of something… something from years past… that intense blast of cheese… that almost foamy lightness… my god… it’s Quavers! Ace. I tell the chef this on the way out. He shoots me a look as though I'd just sat on a batch of his Golden Empire. Back to you then Deanna… David Blake

Accompanied by a cool, smoky-rich bottle of Au Bon Climat, a Riesling Grand Cru from Santa Barbara, we embarked on the six-course lunchtime tasting menu (£60), which with pre-starters and pre-desserts totted up to ten or so. Each might only be small and deceptively simple, but cooking like this makes you a mindful diner. Dishes need to be slowly savoured in appreciation of the sheer number of individual processes it takes to produce them.

To begin, a perfectly piped cod roe dip with delicate black squid ink wafers. Light and slightly smoky, it fell somewhere between a very good smoked salmon paté and taramasalata with even more smokiness from a shallow pool of chorizo oil and sprinkles of various powdered alchemy.

Often, the fancier the food, the simpler the dish description; ‘Prawn cracker, spicy tomato’ turned out to be a seaweed cracker with chopped raw prawns, fermented tomato and chilli, served on the rocks. Not on ice, on actual pebbles, which led to a murmured conversation about which of us would perform the Heimlich manoeuvre, should Gordo try and eat one.

The pebble plate remained for the next course which fitted onto a spoon; raw scallop topped with caviar, lime shavings, buttermilk gel and a spring of apple marigold. The scallop had been cured beyond the understanding of our party, rendering it soft and almost creamy.

‘Fried broccoli, cheese and truffle’ elicited much response, with Gordo exclaiming ‘my god, it’s like I’ve never eaten broccoli before’ and editor David getting nostalgic about the fluffy cheese element putting him happily in mind of a posh bag of Quavers.

More finger food next in the form of a steamed bun encasing an intense combination of pork trotter and belly with pickled onion puree and black onion seeds. Obviously we could happily chomp through dozens of these, but in the context of the other courses, this one seemed a little more unrefined. The filling was on the vinegary side of sour and the dough slightly chewier than Chinatown counterparts. Gordo said it was because the dough was overworked, but dough benefits from a good bashing, so I suggest it’d lighten up with more rest – wouldn’t we all?

The only dish we were served from the tasting menu which didn’t appear on the lunch menu was hot smoked bacon with hen yolk; a clever and comforting take on the classic breakfast partnership with almost imperceptible added depth coming from squid which had been magically transformed into flat white noodles. The editor, always wanting to ‘keep it real’, regarded this as the world’s poshest pot noodle.

The Fat One's going to hang his hat on Reid. Personable, good looking, understated and self-deprecating, everything another high-end chef, recently arrived to the city, isn’t. The ‘tell’ here was the beef broth. Reid served his with bread from arguably the best bakery in the country; Pollen. It takes a chef completely comfortable in his own skin to serve bread as a course halfway through his menu, and someone else’s to boot. Pollen’s 28 hour sour and beer bread came served with two butters and this beef tea (I’m sure it’s not called that), which started calling to Gordo as soon as service placed it on the linen-wrapped table.

Lurking in a sunless Japanese saké mug, the perfume, Kaa-like in its hypnotic effect, wrapped itself around Gordo’s head like a silk scarf made in heaven and finished in hell. It was deep, dark, dangerously umami split through with backgrounds of lavender, aniseed and thyme. Layers and layers and layers. The length on the palette was as long as a sip of a 1970 Graham’s vintage port, still there five minutes later. This was better than being just out the bath at six-years-old drinking Bovril in front of a coal fire, wrapped in a huge, thick, warm cotton towel by your mum after a cold summer’s day on Anglesea beach. 10/10 with fucking bells on.

The flavours in red mullet with roe cream, shrimp and tomato sauce, burnt gem lettuce and seaweed powder, got slightly lost amongst the procession of continuous beauties. In response, general manager Kamilla pointed out to Gordo that the fish course was not his favourite during his last multi-course visit, because she is a confident professional who remembers such things.

Salt aged duck, beetroot and acidic cherry sauce was loved by all. On our way out Reid revealed that this dish alone takes two weeks in the making involving hanging and drying out in a particular atmosphere to get the right levels of seasoning and skin texture, as well as expert butchery skills which prove that breast is not always best.

Pre-dessert, clementine with white chocolate, was the star of the show (main image). Thanks to his turn on Great British Menu, Reid is a bit of an expert on blown sugar fruit with his Golden Empire apple dessert winning him a place in the final. A delicate Clementine sugar shell, with green white chocolate stem and leaf, encased a light white chocolate mousse, which in turn surrounded a hidden sea buckthorn sorbet. Sea buckthorn, an unusual ingredient much favoured by Simon Rogan, is perfect for this sort of thing thanks to its tart acidity and glorious orange colour. It was literally smashing.

We actually preferred this to dessert proper, a classic custard tart with pink rhubarb and ginger malt ice cream.

Adam Reid has such a confidently relaxed style, not just in his cooking, but in person. We wouldn’t want to play him at poker, but the sight of a not particularly under cover Confidential with fully kitted out photographer seemed to cause him not a jot of bother. Reid is keen for his restaurant to be unstuffy and accessible to all by introducing a flexibility which allows diners to pop in for a couple of dishes at the counter or to stay and indulge in a five hour extended lunch.

We're struggling here to give any of the dishes less than a nine or ten out of ten. In which case, Confidential openly declares itself very much Team Adam. 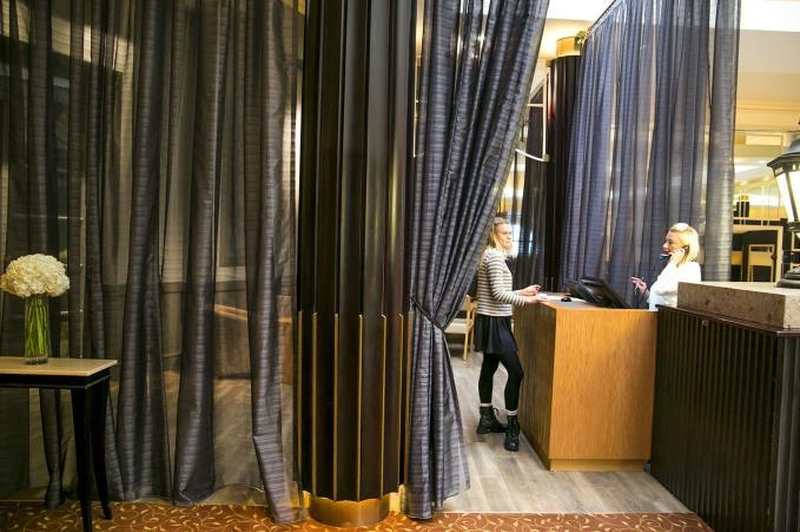 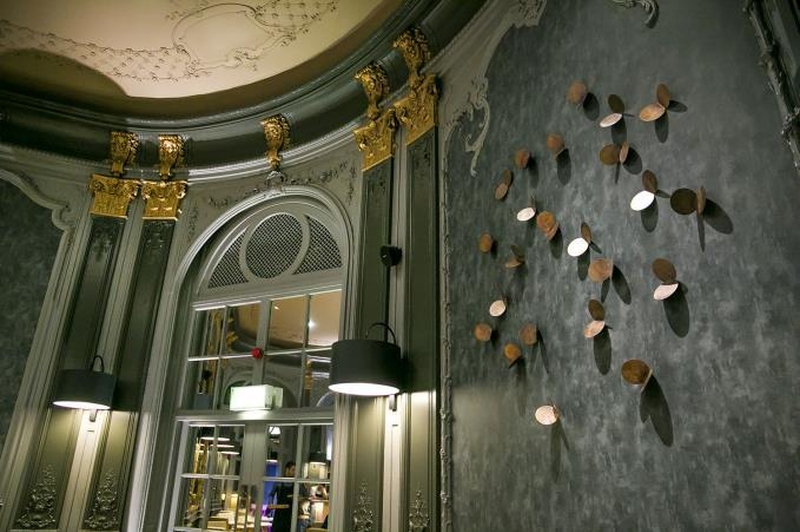