TWENTY-FIVE years ago, entrepreneur estate agent Julie Twist would drive around the streets of Manchester and imagine how all the dilapidated buildings could be transformed. With only 600 residents in the city centre, Manchester was a very different place back then; one Julie was determined to change. Today there are 15,000 city dwellers and rising, and the morphing skyline and continuing boom in city living can be traced back to Julie’s vision two and a half decades ago.

I saw the potential in Manchester city centre as a place to live, but a lot of people thought I was stupid, that nobody would want to do that

Julie Twist, now 49, started her career in 1989 as an office junior at a solicitors firm in Manchester city centre. Rising quickly through the ranks, she took the reins of the property department when it opened, running it for four years. But she had bigger ambitions…

She says: "I have always had a good eye for property. Driving around the city, you could see so many derelict buildings, and when you saw them transformed, you got the bug for it. I remember going in to the former Grand Hotel when the basement was rat-infested – after it was made in to apartments they were 75% sold in the first weekend.

"I could see there was so much opportunity in the city centre, but Manchester was a ghost town at the weekends. All the wealthy people would work in the city during the week and then go home to the suburbs. I saw the potential in Manchester city centre as a place to live, but a lot of people thought I was stupid, that nobody would want to do that."

Following changes at the firm where she worked, Julie decided to take the bold move of setting up by herself and, with a £10,000 loan from her parents, she created Julie Twist Properties and leased her first office in the Great Northern in 1994 – the first estate agent to be based in the city centre.

She recalls: "My first morning in my own office, I remember making myself a cup of tea, putting on my make-up and sitting there thinking 'I’m all on my own.' It was such a strange feeling as I was so used to being part of a team. But I was determined.

"It started off as a very family-orientated business. My mum worked as my secretary, my aunty and sister did my accounts, and my dad did my maintenance. I was supported by an amazing family network and I was very fortunate to have that backing there."

With solid support behind her, Julie lived on rental income until 1997 when her business received the impetus she’d been waiting for. "Sally’s Yard, the first Urban Splash development, was the catalyst," she says. "We sold the twelve apartments and it started the ball rolling for re-development.

"We also took the development Home on Chapel Town Street to London and sold all of the apartments in 24 hours of releasing the prices. By 2000 we had twelve site offices with a person in each, manning it. Business was booming and it was very exciting, albeit very stressful. Around 2000 it just went mad."

After pretty much owning the market for three years, Julie suddenly found that new estate agents branches started popping up on the same streets as hers. She found herself with competition, but says it had an unexpected advantage: "They were doing a lot of advertising, which encouraged footfall, but we had the crop of best properties and we were the ones who would sell the property. Being female was also advantageous. People trusted me and told me they liked my calming manner and enthusiasm and enjoyment for my job."

By 2002, Julie had given birth to her son Louis and daughter Kitty and remembers, just one month after her daughter was born, balancing her eldest Louis’ carrycot on the desk and signing the lease for new Salford Quays offices – the first estate agent to venture that way.

In 2005 Julie won both the Best Small Estate Agency and the Best Overall Estate Agency categories in the Estate Agency Of The Year Awards, beating some of the country’s best and largest estate agents, and being both the first woman and the first agency from the North to win. She says: "For me personally that grew me from being almost like a child to knowing what I was talking about."

Ten years on from that accolade and Julie Twist Properties has picked up silver in the Estate Agency Of The Year Awards and in 2019 is the only estate agents in Manchester city centre to be listed in the Best Estate Agent Guide Awards, which represents the top 5% cent in the country.

This year also marks 25 years in business, so Julie threw a party and invited back former employees to celebrate alongside the current staff members. She says: "They are like a family and many have been here ten to twelve years. Tenant fees have been banned so we have had to re-jig our work, but we have a fantastic team, who work like clockwork. We pride ourselves in numbers, but we favour quality over quantity, and we do things right."

Some of them, in fact, are family, including Louis, who she’s been showing the ropes to. She says: "Last year my son started working with me and he got lost driving around. I went out to meet him and I struggled too – I remembered when I used to drive around looking at the dead streets and derelict buildings, and yet now Manchester is changing so rapidly, I could get confused with the changes constantly taking place.

"I’ve just been to Shanghai and Miami, and their skyline is stunning, but what is unique about Manchester is that its skyline doesn’t blend. It doesn’t represent everything you see when you are on the ground. I always feel pleased to see cranes in the air as it means exciting things are to come. I think Manchester is going to have a very different look in the next five years."

However, Julie says she hopes properties are sold not to foreign investors but rather to locals, to encourage a greater feeling of investment in the community. She says: "There are a lot of people who are passionate and have been here longer than me. I don’t want to see buildings being sold to overseas investors who very often don’t ever visit their apartments, never mind the city – that has no benefit to the community."

Riverview, Salford: The blandest tall tower for a generation?
● / Property 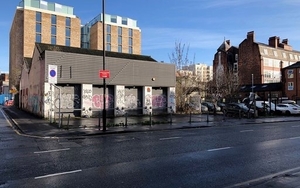 Have your say on new plans for Swan Street development
● / Property 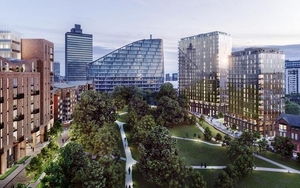 Stockport steps out, MMU steps up, a Canadian pension fund steps in 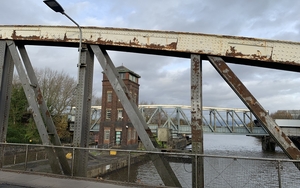 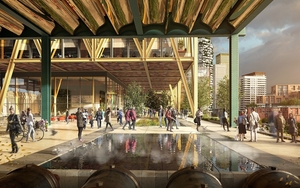