You’d be forgiven for thinking that plant based diets were invented by millennials. But vegetarianism - in some form - was advocated by the old triangle-lover himself (no, not James Blunt) Pythagorus in ancient Greece. Its roots as a lifestyle can be traced back to India around the 6th century BC, with many Buddhists, Hindus, and especially Jains (who even avoid injuring plants) eschewing flesh consumption.

In a month when I have been trying to be virtuous, something vegan that tastes this good is basically crack

Conversely, India is the number one milk producing country in the world and although egg is generally avoided by vegetarians there, ghee, cream, butter, milk and yoghurt are woven into the culinary tapestry. There are vegetarian restaurants all over India, but a vegan one is still something of a novelty.

It’s a novelty here too. The recently opened Bhaji Pala in Gatley claims to be the first entirely vegan Indian restaurant in Greater Manchester. When we visit on a Saturday evening it’s as packed as an unreserved train carriage from Delhi to Jaipur and they are turning people away at the door despite there being at least another four Indian restaurants within walking distance.

My bhaji pal has been vegan for most of her life and is the fussiest eater I know. We start with a first for both of us: sabudana seekh (£5.95) ‘kebabs’ fashioned from sago - a starch extracted from palms grown in freshwater swamps in Asia. Some might recall it from a 1970s ‘frog spawn’ school-dinner pudding. This is thankfully nothing like that, it's savoury and more like fried polenta. A zippy, coriander raita drizzle sparks joy - presumably made from almond yoghurt which I'm told is the secret of the excellent mint and cardamom lassi.

Indo-Chinese food has gratifyingly started to creep onto menus here. It takes the best sticky-crisp elements of an anglo-Chinese takeaway and turns up the spice volume. Tofu mushroom chilli (£6.95) has all the flavours: sticky sweetness, sourness, salt, a bit of spice and umami from the crispy mushrooms and tofu. In a month when I have been trying to be virtuous, something vegan that tastes this good is basically crack.

Dry beetroot (£7.95) is our wild card dish. Cubes of earthy root are hugged by a silky, terracotta-coloured dressing. It’s creamy but not cloying - I wonder if ground cashews are involved - and far from dry. Holy cow, this is good - but the portion is so tiny we panic and order an impromptu third main course (soya rahara, £8.95) - a request met with not even a flinch of irritation from our busy server.

I’m yet to be completely won over by fake meat but this is a fairly convincing vegan rendition of keema with peas. As well as soya mince, there are bigger pieces of something resembling veggie sausage - my friend says they’re ‘rehydrated soya chunks’. Their bouncy texture evokes a stonewashed memory of those teeny soya pieces in a Pot Noodle. I’d could live without them but I can see how they might add textural value for some.

Sides include basmati, quinoa or brown rice in various styles. Our server (wearing a bold, stag-print shirt and giving off ‘owner’ vibes) is disappointed with our choice of steamed brown rice and persuades us to try brown kaju matar (studded with cashews and peas - £6.45). It’s very good; not too oily and the rice is the nubby, short grain kind. A generous amount for a single portion, it arrives in a fabulous, 1970s-style, M&M-green saucepan. An aloo stuffed paratha (£3.50) glistens with what would normally be ghee and doesn’t feel remotely lacking.

The emergency third course proves unnecessary (when will I learn?). Leftovers are packed up for us but we have to try at least one dessert. Ukdiche modak (£4.95) are miniature enough to end the meal on a sweet note without threatening to be the death of us, banana-fritter style. The squidgy turban-shaped rice dumplings filled with jaggery and shredded coconut are just sweet enough.

If you’re looking for options to keep you going through Veganuary and you’re a fan of Indian food, this one’s a no brainer. But it's well worth a visit even if you don't normally avoid meat and dairy. In fact, I reckon Bhaji Pala could curry the favour of even the most hardened Greggs-trolling Twitter warrior. 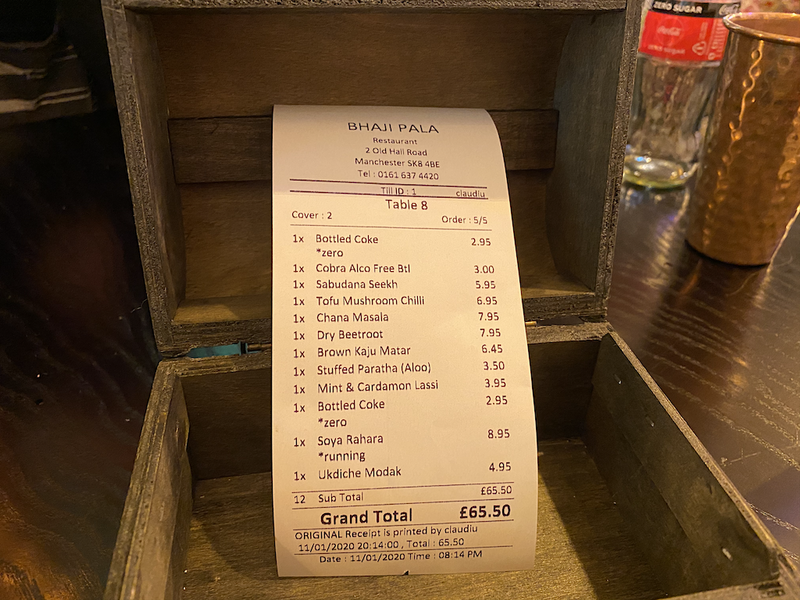