Soups, dumplings and stews – anyone would think it was winter

Our writers have braved the cold wind and laughed hysterically in the face of Veganuary (and dry January) to bring you their favourite dishes this month, from crabs in tacos to prawns in pubs. Where else would you find Chinese fish stews alongside vegan paté and Altrinchammy soup?

Here are the seven things we highly recommend you eat this month... 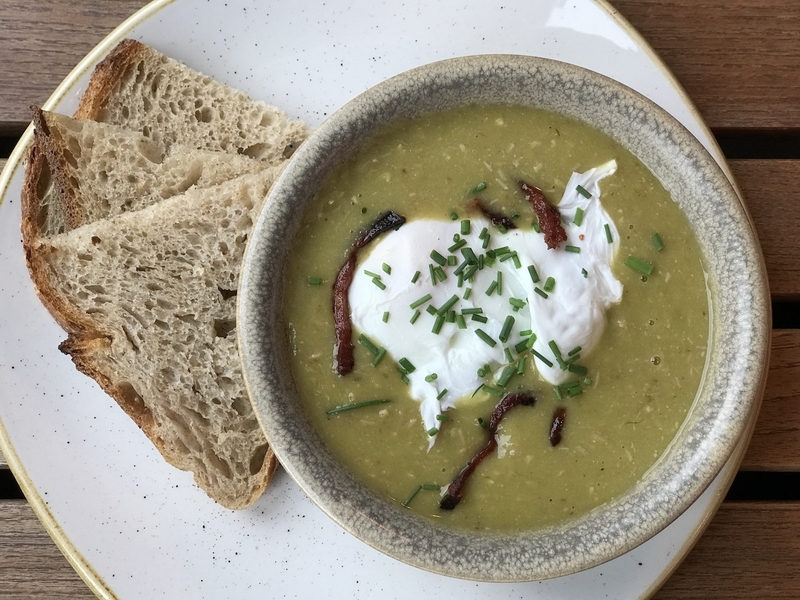 Is there a dish more perfect for January than soup? A bowl full of steaming hot nourishment that satisfies the soul as well as the palate. This particular example, from Altrincham favourite Blanchflower, is a gussied-up version of the pea and ham classic that has bolstered me through many a winter month. First of all, the pea is split (rather than the garden variety) which adds essential heft and a creamy texture. Then there is the broth, conjured from ham bones. Next, a poached egg, coddled in the velvety soup and last but definitely not least, salty crinkles of crisp bacon to impart that essential smoky goodness. Sprinkle on some chives and plunge in some homemade three-day sourdough and you’re good to go, until dinnertime at least. Lucy Tomlinson 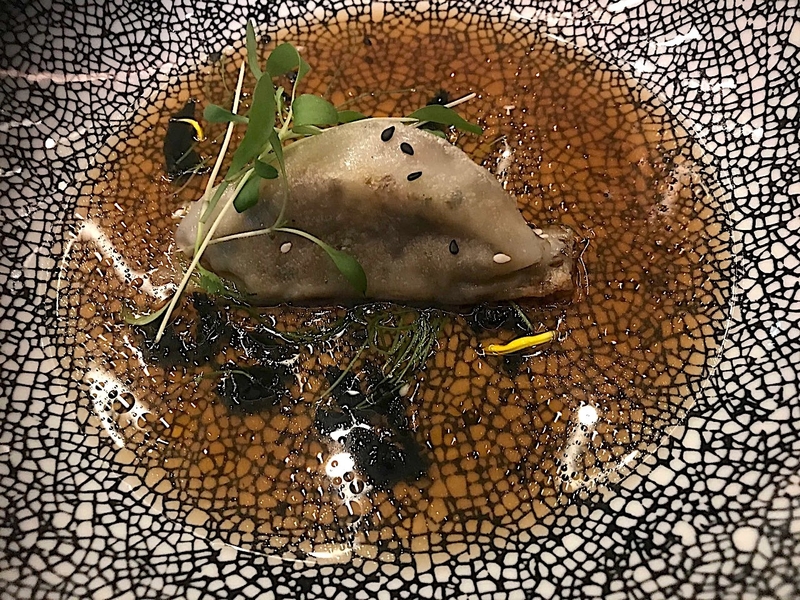 Major root canal work beckons (or an extraction if I chicken out), so biltong and pork scratchings are off the menu for the moment. Not for me ‘Jan-chew-ary’. Ramen has been my saviour, noodles in broth, soft and sloppy. Tokyo Ramen and Cocktail Beer Ramen + Bun were this reviewer’s dream ticket anyway. On reflection, I found greatest comfort in the former’s Miso Ramen, a delicious tangle of sharply pickled shiitake, crispy enoki mushrooms, brown butter and sweet potato in a broth of mushroom dashi with burnt onion miso. So I got a taste for mushrooms and dashi that was satisfied again in the unlikeliest of dining spaces – the Laureate restaurant in the shiny new Crowne Plaza Oxford Road hotel. Well-travelled exec chef Tan Farrell offers a gyoza-style wild mushroom dumpling with strands of wakame seaweed and red sea chicory in a limpid dashi made from kombu (kelp). Squelch plus umami, something I can’t get my teeth into. Neil Sowerby 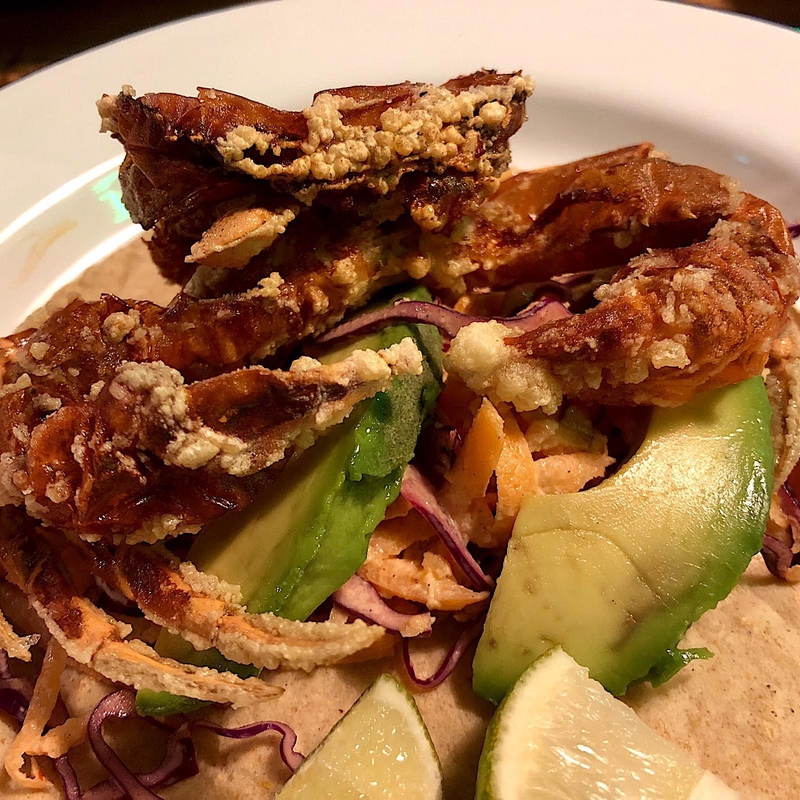 Mexico is on my list of places to go, but El Taquero will have to do in the meantime. Owner Simon Pogson, a big man with fists the size of watermelons, went to Mexico and brought back this gaff, one of the most underrated gems in Manchester. It takes some finding. The soft shell crab taco was a whole, that’s right, a whole soft shell crab. Even I was taken aback. Then I was knocked off my seat; it wasn't easy, but nothing in life worth having ever is. Wrap the taco round this tricky little sod, the claws sticking out of the side, crunched through and chewed, while thinking about the unmissable difference in the deep flavours of real Mexican food prepared by a team with balls the size of bulls. Love it. Gordo 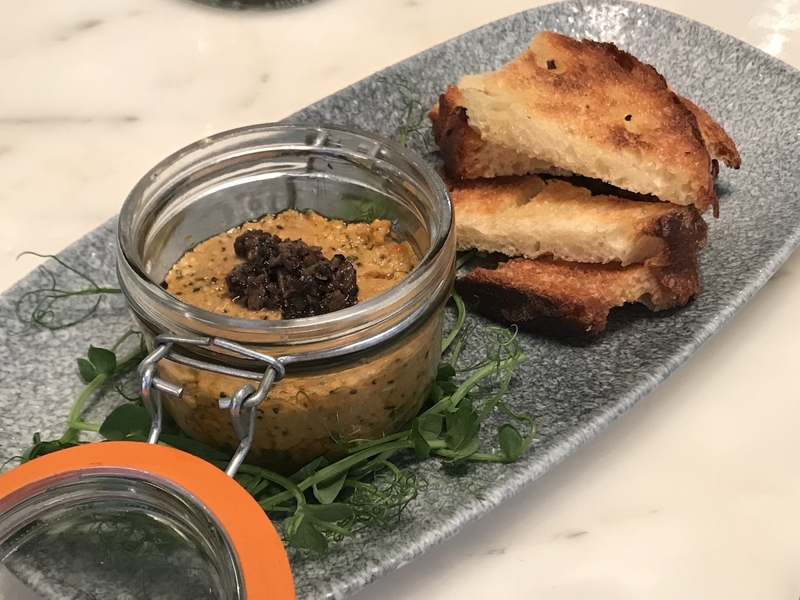 I know, I know. For various reasons, I haven’t been eating meat or fish this month, but that has thrown up the opportunity for me to order things I normally wouldn’t. The vegan paté, currently on Cicchetti’s special menu, took me by surprise. Paté can be a dodgy area of meat-filled mystery at the best of times, but when you apply the accursed word ‘vegan' to it, it just sounds joyless. Even Cicchetti’s charming GM struggled to up-sell this one. When I asked what was in it, he just said “vegetables”. However, they’ve cleverly packed all manner of maximumami filled plant-based things together like crushed sunblush tomatoes, toasted pine nuts and a hell of a lot of garlic, creating a pleasantly spreadable paste that tastes rich and strangely Parmesan-like. It made for a perfect starter with bread, pea shoots and a chilled glass of white. Deanna Thomas 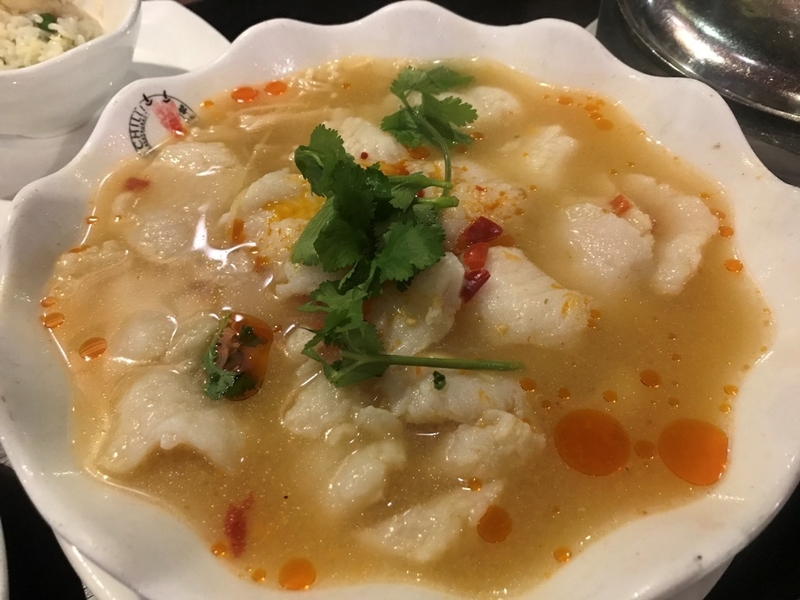 I was going to feature the oyster dish at Mana in Ancoats. I was dining with friends and enjoying one of the most interesting meals I’ve had in the city, but my, was the food complex. After the chef got to the seventeenth element in the dish, or something like that, my mind went blank. I was in wine and I just couldn’t keep up. So instead I’m diving like a hungry merman into a very liquid stew filled with greasy bits and bobs, a fibrous and large fungus and unnamed large lumps of white fish. This sounds rubbish and looks unattractive, but it’s marvellous. It is one of those Chinese dishes which gain from being blurred rather than defined, the devil is not in the detail here but in the sum of the parts. It always makes me smile, too, how many Chinese dishes don’t mention the species of the fish they use, just its shading, as though such details are for pedantic fools rather than those who want to get on with the proper business of eating. Jonathan Schofield 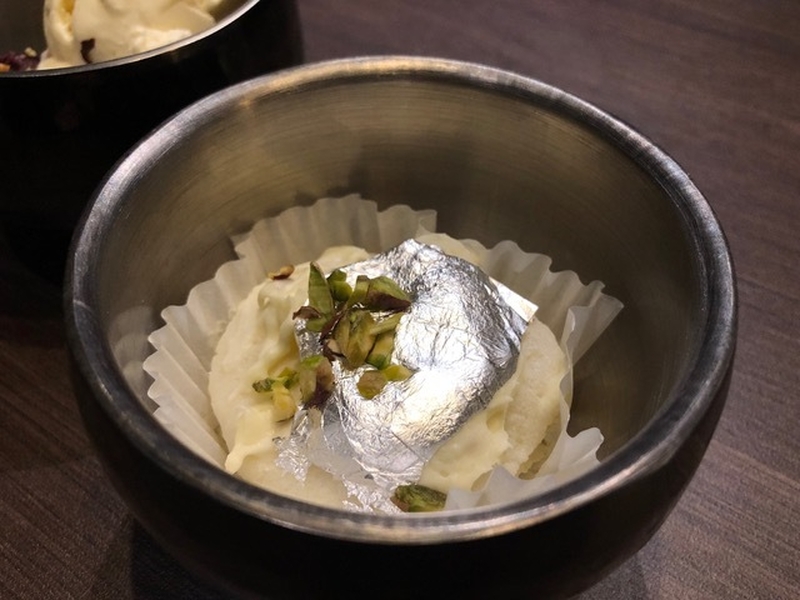 I can’t figure out how this fresh milk, cream and nut confection is so good. After all, the ingredients are bhog standard (if you’ll excuse the pun). Syrup-soaked sponge, a rough take on ice cream, pistachios, and a feather-light, quasi-frozen cream layer. Perhaps it’s the silver leaf that makes the difference but, either way, it’s a mindblower. In fact, when I visited last week, Lily’s owner told me that at a wedding banquet they’d recently catered for, the guests were scooping up five at a time and stuffing them in their handbags. One bite, and you’ll be doing the same, I promise. Ruth Allan 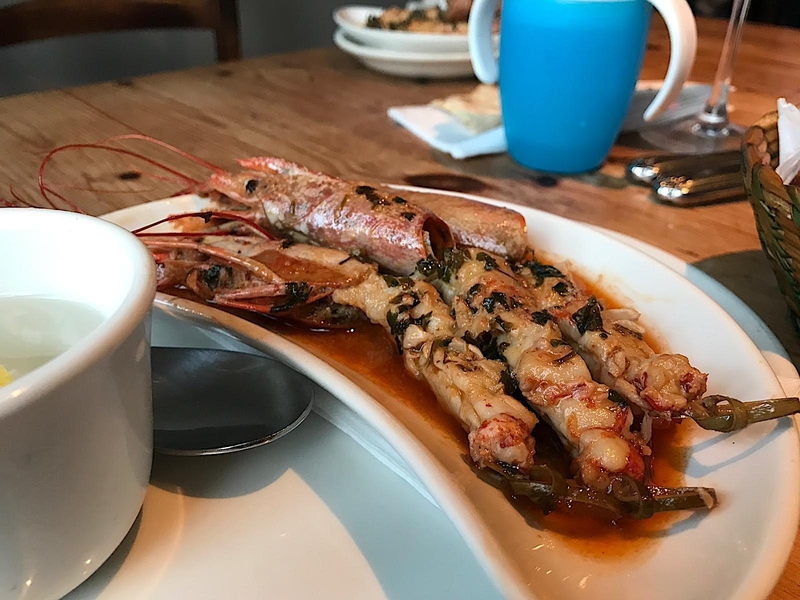 It's back to the Parker's Arms, for me, the North West's best food pub (oddly dropped eight places by the Estrella's Top 50 UK Gastropubs this year - bit of a boy's club up top isn't it fellas?). Tucked up in the belly of Bowland, it's testament to the cooking of the self-taught, one-woman kitchen powerhouse Stosie Madi that so many are willing to drive an hour north of Manchester to chuff her grub. This time the stars were three big fat juicy red prawns cooked, she tells me, 'en estouffade' (that means smothered) with roast garlic whipped into rapeseed oil and butter, finished with salt, parsley and lemon. Ace they were, decapitated and pre-skewered to avoid all that messy finger business. David Blake

Another Hand makes the Michelin Guide
● / Things To Do

What you say
Read Next
● / Visit