But its owner has revealed exciting new plans

Anthony Barnes, owner of independent restaurant-bar (and sometimes gallery) Squid Ink on Great Ancoats Street, has announced that he will be closing the venue later this month.

Squid Ink opened almost exactly two years ago as a self-funded labour of love for Ancoats-born Barnes, who had no previous professional kitchen experience. It promised ‘good world food at reasonable prices’ with a continuously rotating small menu, with some ingredients coming from the family allotment.

The venue soon gathered a loyal following which praised Squid Ink for its attention to detail, affable service and inventiveness. The 30-cover restaurant also hosted many interesting one-off collaborative chef and supplier events as well as catering for many private occasions.

Prices too were reasonable – although perhaps too ‘reasonable’ for a business to thrive amongst heavily growing competition in the area. Squid Ink was initially offering five courses at just £25, with three for just £15 between Tuesdays and Thursdays.

Although Anthony maintains that the reason for closing was not financially motivated, "I’m proud as punch to say we’ve never been in debt, overdrawn or borrowed money, Squid Ink is entirely financially self sufficient and has turned a profit every week since the day we opened."

In a surprise announcement via the restaurant’s social media accounts, Barnes says:

‘The time has come for me to close down the restaurant I literally designed and built with my own two hands.'

'I opened Squid Ink as I love food and decided I wanted to open a restaurant that used good quality ingredients to make great food at a good price.

'Some would say it was a stupid idea considering I’d never actually been a chef beyond the week you do in a kitchen for management training where you basically make salads from a pre-mixed bag. However i knew I was passionate enough to make a good go of it in an area I grew up in...'

Thanking staff, food and drink suppliers, supporters and customers, Anthony goes on to reveal that the closure of his restaurant is not where the story ends. He will be moving around the corner to Sawmill Court later in the summer to work with ex-Noma chef Simon Martin at his new ‘wild dining experience’, Mana as Director of Operations. 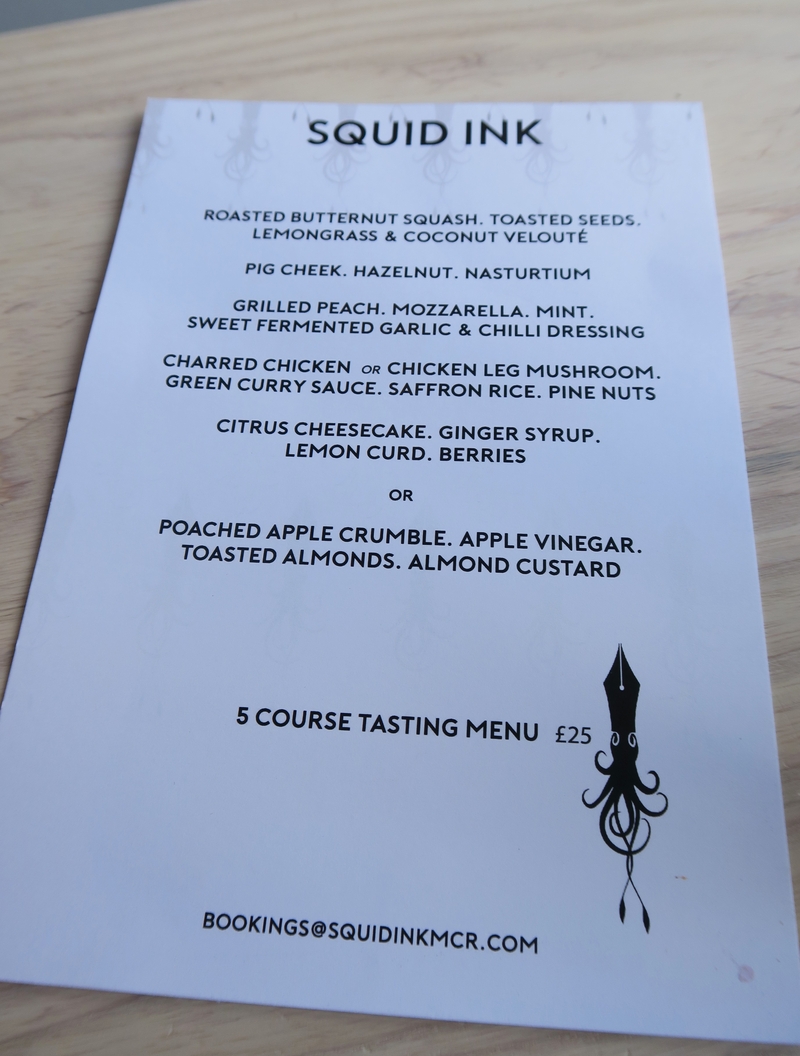 Extremely proud to announce that Anthony Barnes, former owner of @SquidInkMCR will be joining us as Director of Operations! pic.twitter.com/P7KnGc5VPc

Responses across Squid Ink’s social media channels have been unanimously supportive with fans lamenting the restaurants closure whilst promising to visit Barnes in his new role..

Squid Ink’s final service and closing party will be held on the 23rd June.

Here's the statement in full:

The time has come for me to close down the restaurant I literally designed and built with my own two hands ...well, my own and maybe a lot of help from family and friends! In particular I’d like to thank Mike, Big John Pops and Stephen. I opened Squid Ink as I love food and decided I wanted to open a restaurant that used good quality ingredients to make great food at a good price. Some would say it was a stupid idea considering I’d never actually been a chef beyond the week you do in a kitchen for management training where you basically make salads from a pre-mixed bag. However i knew I was passionate enough to make a good go of it in an area I grew up in, Ancoats! I’d like to thank everyone who have supplied us over the last two years; @littlepigsdids , @mancocoltd , MancVeg People, @noonesfreshproduce , @shindiggerbrewingco , @cloudwaterbrew, @ticketybrewers @rivingtonbrewco , @edenfinewines and a company I’ve grown close to in many ways, @boutinotwines , with a special mention to @tomcurvis ! I’d like to thank my friend Claire who designed our AMAZING logo and did all my branding for me, which in my personal opinion is the best restaurant logo on the planet, period!🤪 (Even if we never served Squid or it’s Ink!) Also, I’d like to thank Joanne, my accountant who has been invaluable throughout. I’d also like to thank everyone I’ve worked with during Squid Ink’s time; @wade_dutton my closest pal, who did me a favour last August and never left, @ellawolverson who opened with me, @jack.haves and @beccajoyhorn (who came for dinner and ended up working for me) & Big Man Adam. In addition to their full time jobs they came to help me and did an excellent job and I think our reviews are testament to that, so from the bottom of my heart, thank-you! And finally I’d like to say a big thank you to all of you who came and supported us and recommended us to others. A special thank you to Mark and Deborah, our first customers and to all our regulars who have also become our friends! I’m not going far…I’ll be moving 2 streets away and taking up a role with the ridiculously talented Simon Martin at Mana. A restaurant and role that I’m ridiculously excited about! Anthony
A post shared by Info@SquidInkMCR.com (@squidinkmcr) on Jun 9, 2018 at 7:56am PDT

No YOU'RE crying. Loved this wee gem so much. Thanks for the memories (and wonderful food and wine) fella, you aced it. Squink forever. ❤❤❤❤ https://t.co/KpqK266cSW
— The Greedy Girl (Freelance Copywriter) (@TheGreedyGirl) June 9, 2018

This place had moments of genuine greatness. I will miss it very much. https://t.co/giLUVJgNTo
— Dr Rick (@rfbooth) June 9, 2018