The news round-up for Manchester this last week, 29 January-5 February

A regular column charting the changes and news in Greater Manchester, highlighting stories that interest us and will hopefully interest you.

Ah yes, wild old Handforth. Big news happens there all the time, like when Mrs Baxter almost walked out of an off-licence without paying for a half-bottle of gin, or that terrible moment when old Mr Fisher put his recycling in the wrong bin.

This week Handforth has made the national headlines with some juicy parish council scrapping over planning policy. This was all recorded via Zoom. Perhaps a Netflix mini-series is in order.

The unseemly rowing delivered the line of the week with a startling claim from parish clerk, Jackie Weaver. Head in hands, she uttered the immortal words: “It’s nothing if not lively in Handforth." This should be immediately emblazoned on t-shirts and worn proudly by every resident.

The unruly meeting involved lots of shouting revolving particularly around one Brian Tolver, who decided he was the clerk and was ultimately excluded from the meeting.

Hero of the day Jackie Weaver said at one point: "The chairman simply declared himself 'clerk' and notified everybody of the case. There is no way of stopping him from calling himself clerk. Please refer to me as Britney Spears from now on."

We called pop icon Britney Spears for a comment but she was too busy preparing for an extraordinary meeting of Gatley Parish Council. Apparently Mr Fisher is moving to Gatley from Handforth and Ms Spears has proposed he should receive formal instruction in correct recycling procedure.

Peel and Newton under attack

On Thursday the University of Salford emailed its alumni to consider whether the titles of the Peel and Newton buildings still "remained appropriate". This is part of a wider consultation across the University’s staff and students. Last year the issue of slave links to the long dead was a hot topic after the Colston statue was thrown in the dock at Bristol which in turn had been part of the outrage felt at the hideous killing of George Floyd in the US.

Some thought the Salford reference to Sir Robert Peel, a pro-slaver, in an institutional building was all wrong. Problem was these complaints were directed against the wrong Sir Robert Peel. This one was an abolitionist and a truly great statesman whereas his dad was pro-slavery.

This pretty crucial distinction was lost in the hashtag social media frenzy. Of course if people had bothered to check things out for themselves it might not have been.

At least Salford Uni received complaints about Peel. They have not received any complaints about the Newton building being named after Sir Isaac Newton. Instead they’ve taken it on themselves to create a point of tension where there was none. A suggestion that this gesture is an attempt to deflect away from the University’s own difficult history with diversity and inclusion (even recorded on Wikipedia) is probably wide of the mark but why have a consultation over an innocent party and one that hasn't even been flagged up?

The hullabaloo over the extraordinarily maladroit composition of the planning application for the ‘Hulme Street Tower’ is still simmering. If a hullabaloo can simmer, that is.

In the hearing a couple of weeks ago a ‘minded for approval’ statement was replaced with a request for a site visit. The application had been false or evasive about nearby residents’ rights, the height, the length of time the project would take to build, access during construction, economic predictions, endorsements from other organisations and so on and so on including no real evidence of final delivery.

The shambles has led the 508ft tower, clad in brick, to be dubbed ‘The Tombstone’. Given all the holes in the planning application a better name might be ‘The Cheesegrater’.

Now there’s a row over the images and renders supplied in the application which frankly are deceptive. The building appears as an outline in the sky. On one it appears to be taller when viewed from a distance than from a previous image which was closer to the site. On another image the strongly orange cladding of the building is white, exactly the same shade of white as the fluffy clouds. This is important because having Accurate Visual Representations or Verified Views is a statutory requirement of planning applications. These are as accurate as a child’s drawing. It appears somebody is pulling a fast one, or so confident of approval they haven't bothered to do things properly.

Homeless to be put in cold storage - so to speak

A big story this week was all about ‘forty new permanent modular homes, made from re-purposed shipping containers’ for homeless men. The proposal, called Embassy Village, is located in that area of Hulme marketed as Castlefield and bordered by the Bridgewater Canal, the River Medlock and the dual-carriage way of the Inner Relief Road. The graphics are attractive and the initiative which includes a ‘Village Hall’, recreation areas and places for the men to grow veg has gathered favourable comments, although our visit revealed a former use - cold storage. Unfortunate connotations for the homeless. 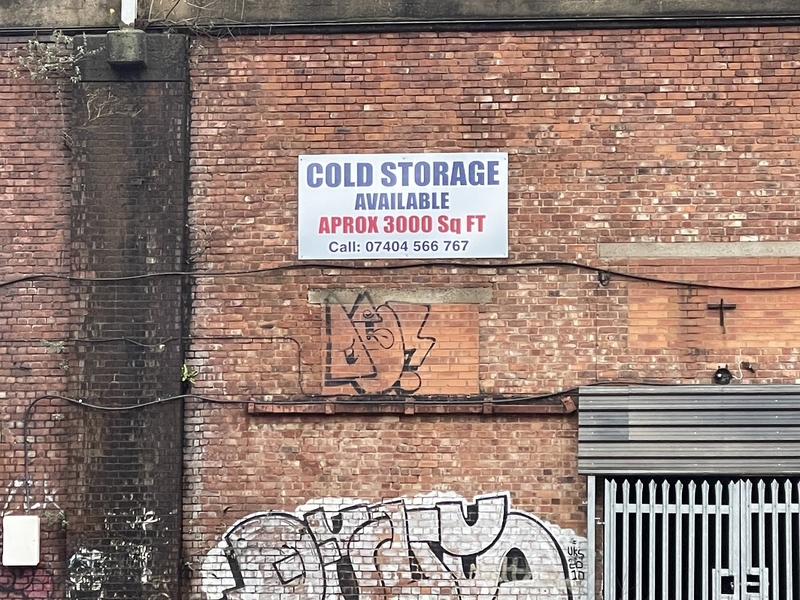 Not all comments have been positive yet solutions need to be found for Manchester's shameful homeless stats. The good news is many good people are working on the issue and this attractive scheme can be part of that. At the same time the imaginative transformation of disused locations in the city centre into something of value and civic amenity is to be applauded. We can all suggest similar sites that need some action. For example, that odd little public gardens on the north side of Albert Bridge, close to the People's History Museum, needs bringing back into civic use.

Fifty years as a landlady, Nancy of the Pev

Sweet news came with the announcement of Nancy Swanick's 50 years as pub landlady of the Peveril of the Peak. The pub with the beautifully tiled exterior, the cracking multi-roomed interior and the oldest table football machine still in use in the UK, has been fortunate to have as 'mine host' the fabulous Nancy. She might be 89-years-old and in a wheelchair but the grandmother-of-five and a great grandmother too, is the power behind the bar. It's Nancy that has ensured the pub has retained its timeless air and a host of regulars. Well done Nancy.

We are very close to an anniversary of another long-serving Manchester figure. He likes a pub too, especially Fridays in the City Arms. Yes, Sir Richard Leese, Manchester City Council Leader, will have been in position on the Town Hall throne for 25 years on 20 May.

Read next: COVID-19 update: "There have been reports of people fiddling the system"