5 places to eat vegan in Manchester without a fuss

GREATER Manchester is blessed with some very good vegetarian restaurants which happily cater for meat-free diners with more imagination and flair than three ways with mushrooms and dust.

Places such as 1847, Bundobust, Greens in Didsbury, The Earth Café, Zad’s Pizza in Chorlton and Lily’s in Ashton are all fully vegetarian, while restaurants like V-Rev, the Northern Quarter diner, and Allotment in Stockport are totally vegan.

Even the bigger chain restaurants such as Yo Sushi!, Wagamama and All Bar One have jumped on the vegan bandwagon this month, but what about some of the places you'd assume don't cater for vegans?

If you are one of the 115,000 people who have taken up the Veganuary pledge to live meat free this month, you might be wondering where you can go out to eat without settling for a salad or a plain pile of vegetables. And what if your dining partner is a committed carnivore? You’ll need to find somewhere that satisfies you both.

If you’ve spent your first vegan week or so cooking quorn chilli 'non' carne and lentil stews in the safety of your own home, but fancy eating out for a change, here are a few places you might not realise have a very decent vegan offering. 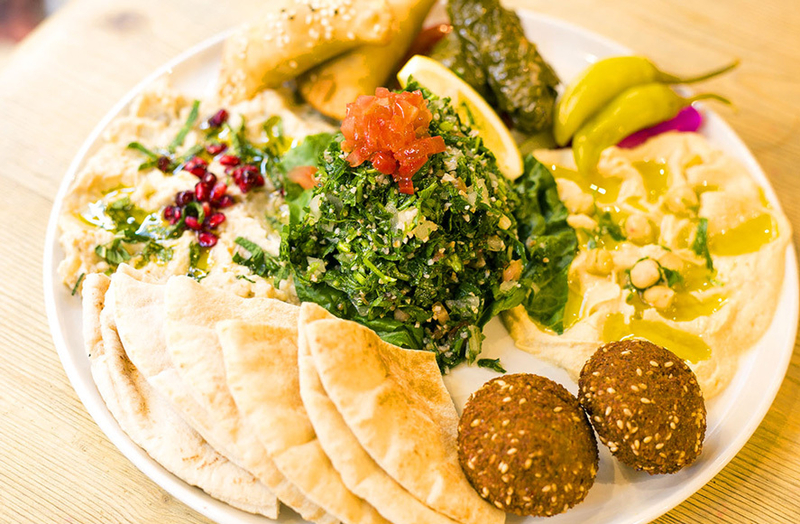 When you think of traditional Lebanese food, your first thoughts might be charred chunks of chicken on skewers or various lamb dishes cooked over an open flame, but this rich food culture also includes a wide variety of meat-free mezze dishes made with whole grains, pulses, herbs, spice mixes, vine leaves, olive oil, toasted nuts, garlic, fresh vegetables and zingy fruit such as lemon and pomegranate.

Main courses will be quinoa, chickpea and pumpkin salad with pomegranate dressing, as well as an aubergine tagine in a rich tomato sauce. For dessert, ve-guests can share mouhalabi, a traditional Lebanese coconut milk pudding flavoured with rose water syrup and topped with toasted pistachios. 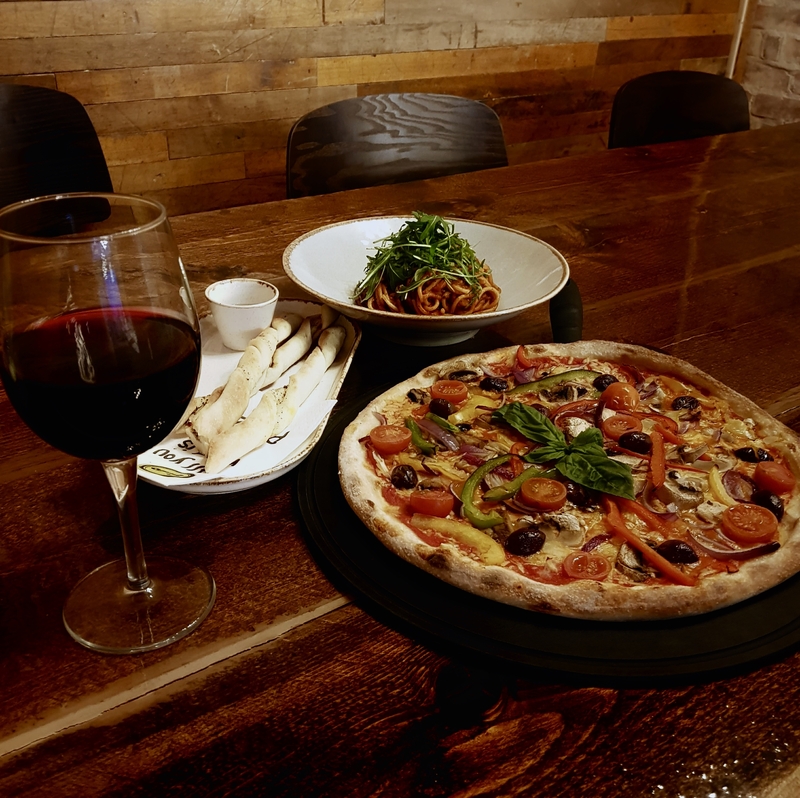 A vegan pizza doesn’t just have to be a regular pizza without cheese and a few vegetarian toppings on it, it can be so much more. Popular Nantwich pizza cafe Enzo opened a branch in Manchester last year and their menu includes loads of choice for vegans. Their freshly made pizza dough and pasta (with Napolini sauce) are both vegan and they also offer a vegan mozzarella substitute.

Enzo’s new menu even has a ‘Pimp my Pizza’ section where vegans can create their own fully meat-free pizza with six veggie toppings from a choice of cherry tomatoes, peppers, mushrooms, sliced red onions, courgette, olives, spinach and chilli.

They also serve loads of vegan sides like dough balls, rustic bread twists with chilli, rosemary and salt, mixed salad and olives, as well as vegan breakfast options like mushrooms on toast. Enzo are also proud of their delicious homemade vegan cake (which they serve with their top quality coffee) and stock a number of vegan wines and beers.

Throughout 2017, Enzo hosted a number of popular vegan nights with a fully vegan menu. Follow them on Twitter and Facebook to make sure you don’t miss out in 2018. 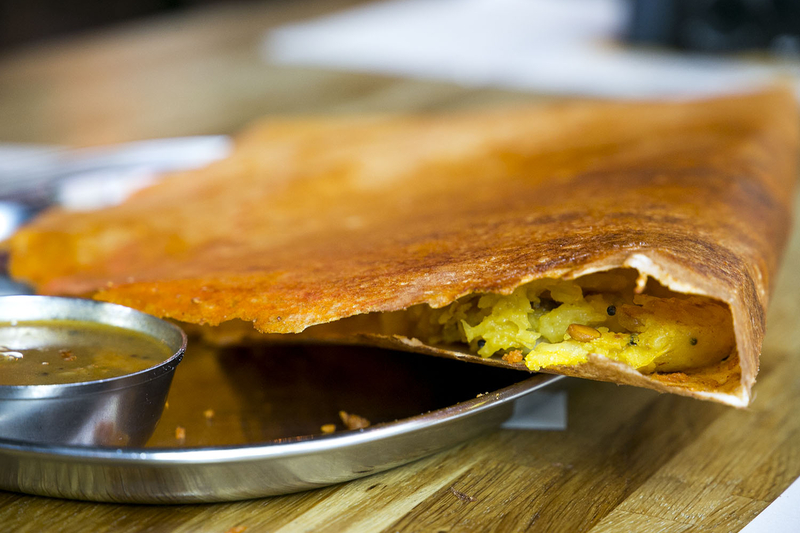 ITR specializes in authentic food inspired by the bustling streets of India. Both the owners are strict vegetarians who have been brought up without eating meat. Even though the regular menu offers a number of halal meat and poultry dishes, they also offer a separate vegan menu full of the type of dishes they enjoyed whilst growing up.

ITR also serve a few vegan Indo-Chinese dishes like Schezwan rice and noodles - a legacy from the small Chinese community who settled in Calcutta for over a century. Curries are numerous and hearty packed with things like sweet potato, spinach, chickpeas and various types of lentil. 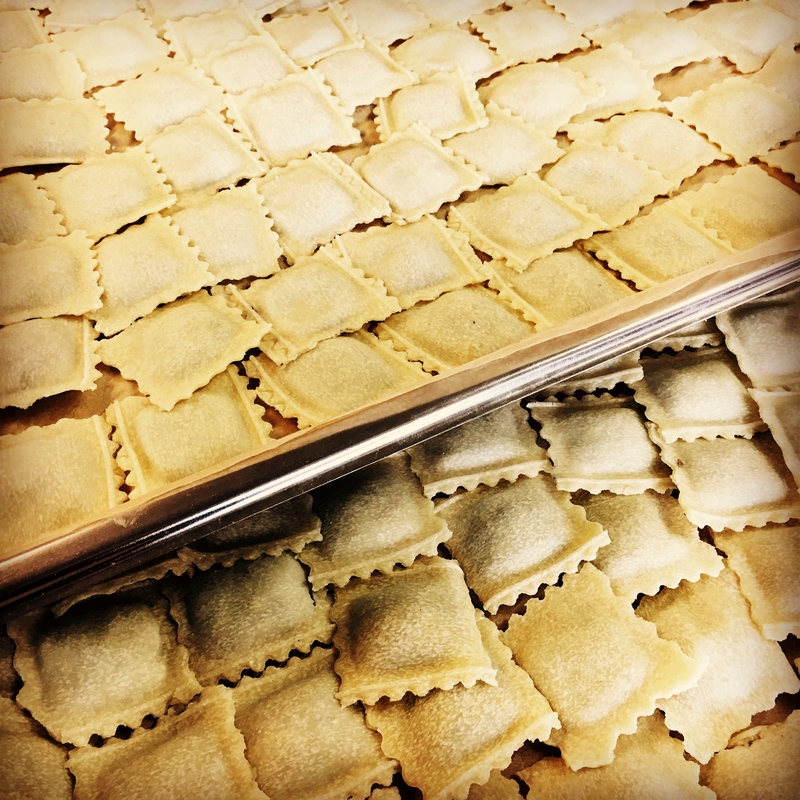 Not all pasta is made using eggs. In fact most involves a simple mixture of durum wheat and water to create a vegan friendly pasta dough ready to be shaped into hundreds of different shapes. Fresh (vegan) pasta, made daily on the premises is Pasta Factory’s shtick, and they have plenty of vegan-friendly sauces to match.

There is more to choose from than just the usual plain old spaghetti with tomato sauce. Although the menu changes a few times a year to reflect the seasons, expect to find dishes such as the classic bucanti aglio e olio, with specially imported Pugliese olive oil tossed with breadcrumbs, garlic, parsley and paprika; or spinach bucanti sautéed with fresh vegetable ribbons and oven roasted garlic. There’s also pipe rigate con porcini and noci - big shell-like pasta shapes served with a rich sauce made with tomatoes, porcini mushrooms, aubergines and toasted almond flakes.

A must have dish for vegans (and non-vegans alike) has to be Confidential favourite triangoli di funghi in salsa al tartufo; handmade triangular ravioli filled with mushrooms, garlic, parsley and cashew nuts, dressed with a black truffle and porcini sauce – a wildly comforting autumn/winter dish as pleasurable as a barefoot walk on a mossy path on a warm day.

Pasta Factory has also created a special vegan Parmesan cheese substitute made from a blend of almonds, cashew nuts, herbs and lemon to capture that special umami essence which compliments Italian food so well. All wines and beers are vegan too. 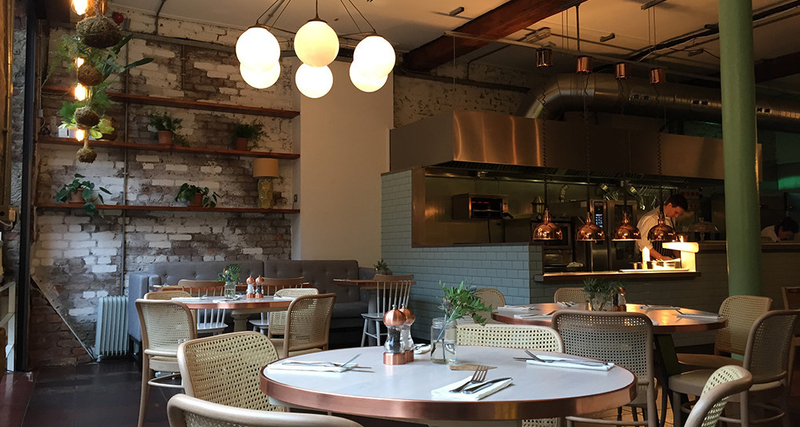 We’ve included this one because, although there are only a few vegan dishes on the menu, they have all been created with a bit of special flair and imagination.

Evelyns is open for breakfasts where vegan can feast like a king on smoothie bowls and almond milk porridge. The vegan lunch dish is a hearty bowl of protein rich grain quinoa and bulgur wheat topped with whipped silken tofu and roast beets while for dinner, vegans can enjoy a hearty plate of crispy tofu with cauliflower, courgette, lentils and spinach.

They also serve a good range of vegan liquid refreshment including cocktails and a refreshing range of teas.

Like this? How about a quick look at our ultimate guide to Manchester's January dining deals 2018