Back To Stories
● / Chinese

Chinatown is a Manchester institution that, at one time, boasted four restaurants in The Good Food Guide - more than any other area in Manchester. It has always been bustling, colourful, full of intriguing smells and culinary adventures. But in recent years, despite still being home to some excellent dining options, it has let itself go a bit. While other parts of the city are booming, has Chinatown become unfashionable?

Chinese food is famous because we use every part of the animal. Nothing is wasted

With so many ’old guard’ restaurants, it’s somewhere that you don’t see new places opening very often, so when MCR Chinese restaurant popped up last summer in the old Siam Smiles site, we were intrigued. We visited for a chat with owner William Lau, a Hong Kong native who has lived in Manchester for almost 40 years.

It doesn’t look like your average Chinatown gaff. The modern signage, William tells us, crafts the Chinese symbols for ‘man’, ‘city’ and ‘restaurant’ into its bee shaped logo. Exposed brick walls and industrial features are more reminiscent of Ancoats.

William explains, “I eat out a lot in English places like 20 Stories, Hawksmoor. Nearly every restaurant now has exposed brick and the industrial ceiling like this. It’s a listed building. The whole decor is based on the brickwork - a rustic feel - and the bee obviously.”

Front of House is run by William’s sister, Flora. A natural, she greets you like an old friend. They aim to cater for everybody, with Hong Kong tea, traditional roasted meats, the rice and seafood of Cantonese cuisine and a bit of Szechuan spice - popular with students.

“We have some more ‘English’ stuff but we encourage customers to try things. A lot of people daren’t taste new things. Here it’s cheaper, but in an expensive restaurant it can be a costly mistake if they order wrongly. People are still eating sweet and sour because they trust it so they stick with it.”

William wasn’t worried about opening a new restaurant in Chinatown. “We get a lot of visitors from all over the world. The main competitor is the city centre itself expanding. In the seventies and eighties people came to Chinatown. There was nothing much on the outskirts of the city. Now all of the city is competitive. There’s a lot more choice. Over the last 10 years, all the good steakhouses have opened up, even The Ivy.

“Then there are places like Tattu. This kind of restaurant is all about the wow factor. The plates themselves cost £20, the waitresses are beautiful - I’m not criticising, it’s just different. We are offering traditional, proper food, not fancy food. It’s very authentic. If they opened a similar restaurant to Tattu in Chinatown it wouldn’t work because the Chinese won’t eat it if it’s not authentic. A three million pound restaurant here wouldn’t work because of the surrounding area - people want to go on to a wine bar afterwards.”

Has Chinatown fallen out of favour with people outside the Chinese community? “Not a lot of English people come to Chinatown. We do cow trotters, intestines… There’s a lot of odd stuff in Chinatown. But this is still the hub of the Chinese community. It doesn’t matter how old or unfashionable it is, tourists and students still come. The old fashioned restaurants from the eighties still survive here. There’s a lot of choice in the city for English people so they don’t have to come here. We want to encourage English customers to try more authentic, different stuff in Chinatown instead of sweet and sour. My chef has worked in five star hotels in China. We are confident that the food is good.”

Does William think people misunderstand Chinese food? “It’s been twisted a lot in this country to suit English people’s tastes. China is the size of Europe. How many different cuisines are there in Europe? Szechuan food is spicier and they like roasted meat. Up north, the weather is cold - in Beijing in winter it’s minus 30 - so they eat comfort food but they don’t eat rice. In the North West region they eat a lot of pepper because it’s damp in the mountains. In the Canton region in the south of China and Hong King we eat a lot of seafood, more plants. It’s not as heavy.”

“The majority of English people won’t try things like pigs ears. Chinese food is famous because we use every part of the animal. Nothing is wasted. Even on chicken feet there’s something to eat - except the bone, we spit that out. There’s no meat on them - it’s like a finger. You eat the skin and the cartilage. It’s passed from generation to generation. Some English people won’t even eat chicken with bones in it.”

William talks fondly of Hong Kong’s ‘private dining’ scene where supper clubs might be held for 20-30 people somewhere on a housing estate.

“Tonight we are doing a special hotpot for 20 people to celebrate the opening of a new casino. There will be about 10 different dishes: pheasant soup, lobster salad, garlic steamed razor clams, steamed eels and cow trotters. If you give us a budget, we can work with it.”

Is sweet and sour your go-to? Or would you try pigs ears and cows trotters? We asked William Lau to come up with a list of five dishes, ‘safe’ alternatives to sweet and sour that you might not have tried, and five unusual dishes for the more adventurous eater to try.

Five alternatives to sweet and sour you might not have tried 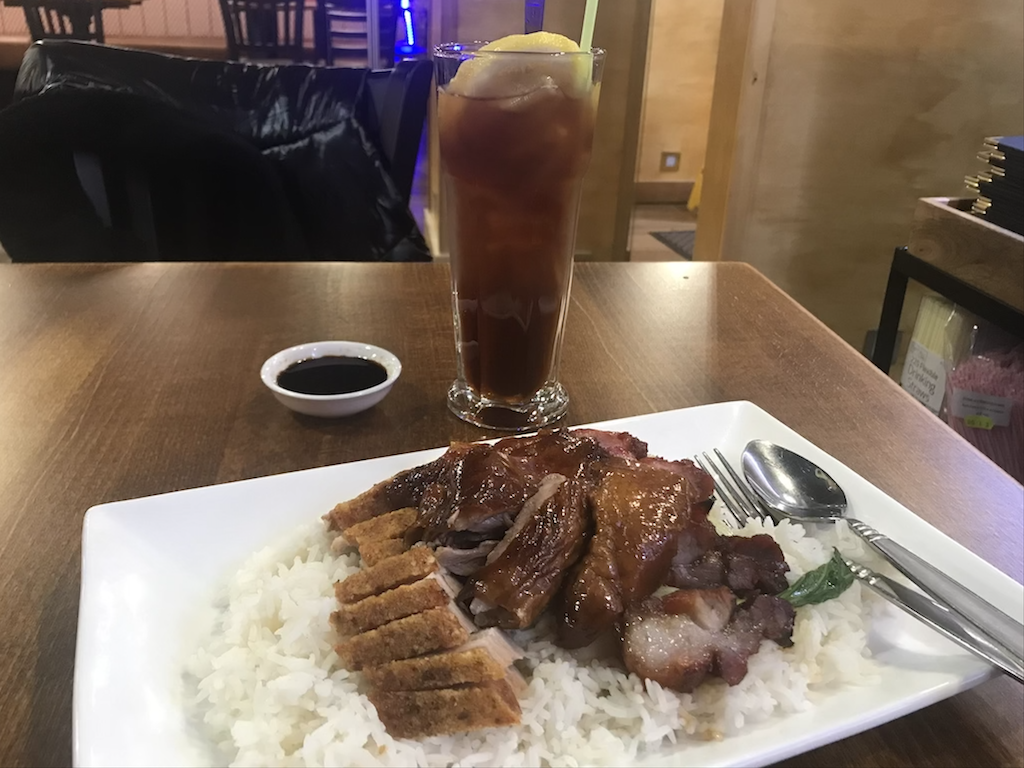 Roast meat trio - Mcr Chinese Restaurant’s speciality. WIlliam says: “When I make pork with crackling for my English relatives, everybody loves it. Our version has loads of salt and it's pricked with loads of holes then dried with a fan for 10 hours overnight.”

Stir fried beef flat noodle - One of the most popular dishes in Hong Kong. "They stir fry the noodle and onion with soy sauce which creates a powerful aroma from the wok. This is a drier style dish."

Fujian fried rice (diced duck, char sir, shrimps, squid and veg) - Fujian is a mountainous province on the southeast coast of mainland China. "This is like special fried rice that the English like, but it has duck and seafood as well."

Won ton soup noodles - "This is comfort food with wontons in it, a bit like dumplings. It’s good if you don’t want something too heavy."

Homemade tofu "This is very popular. It’s very soft. We soak the soya beans overnight and then make it into a paste and steam it - you have to be very gentle. You can serve it with seaweed or seafood or just with some mushrooms and a sauce." 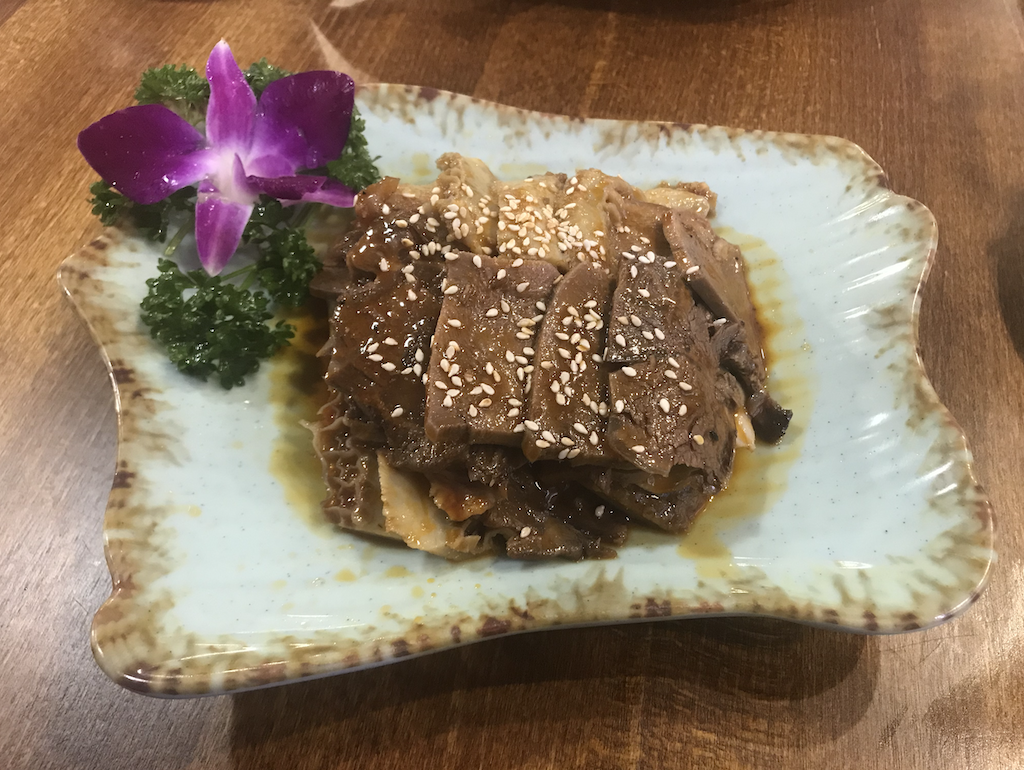 Hot and spicy cow trotters - These come in a hot and spicy broth. They have a gelatinous texture. They contain a lot of collagen, which Flora says is good for anti-ageing.

Ox heart - This is cooked and sliced served cold, marinated in a fresh peppercorn and chilli oil with herbs and spices. The marinade is fragrant and pepper hot (rather than chilli hot). It numbs your lips and the tip of your tongue.

Duck web and Chinese mushroom cooked in abalone sauce - Abalone, from the gastropod family, is one of the most expensive seafoods you can buy. Duck feet also have lots of collagen. William says the texture is different to chicken feet which are softer.

Jellyfish is on the menu as part of a sauce but you can eat it on its own. William says it’s like cold, rubbery but crunchy elastic bands. It’s this texture that is the appeal. “There is no vitamin value in it, it’s just for the texture. They’re big jellyfish and they catch them and pack them with sea salt to keep them fresh. It's very salty so we cut it into thin slices, run it under cold water and blanch it in boiling water. Southern Chinese people are near the sea so the Cantonese like lots of seafood. You can buy the most expensive, exotic seafood in Hong Kong.”

Thousand year old egg - “This is a fermented duck egg and it’s quite smelly. They wrap it in mud and straw and they ferment it for maybe four months so people nickname it the thousand year egg. When you open it up it’s black.”