Why Manchester’s rainy rep is unfair

Jonathan Schofield blots out the nonsense about the never-ending rain

It rains every day in Manchester, it never stops, there’s just relentless precipitation. Best take scuba equipment with you if you go out.

Everybody knows how wet it is. The locals say “Well, it is Manchester isn’t it?” Manc comedian Les Dawson once quipped: ‘People think it always rains in Manchester. This is not true, although, I admit, it is the only town in the country with a lifeboat drill on the bus routes.’

The recent re-imagining of the Ibis Styles Hotel on Portland Street (the old Portland Hotel) takes our reputation to such an extreme the rest of us can probably give up mentioning it.

In a cloudburst of over-theming just for Manchester, the chain hotel features festoons of umbrellas hanging above the main lobby, chromed wellies near the loos, bedside tables shaped like clouds propped up by umbrellas, bedroom wallpaper with a beautiful woman from the 1950s standing in front of the hotel and text saying ‘Rain, rain, go away…’ The Do Not Disturb signs read ‘I’ll take a rain check’. It’s exhausting and everywhere (see below).

The rainy status goes back a long way.

Here is an anonymous poem published in the Manchester Mercury newspaper back in 1821 and allegedly written by a gentleman waiting at the coach-office: 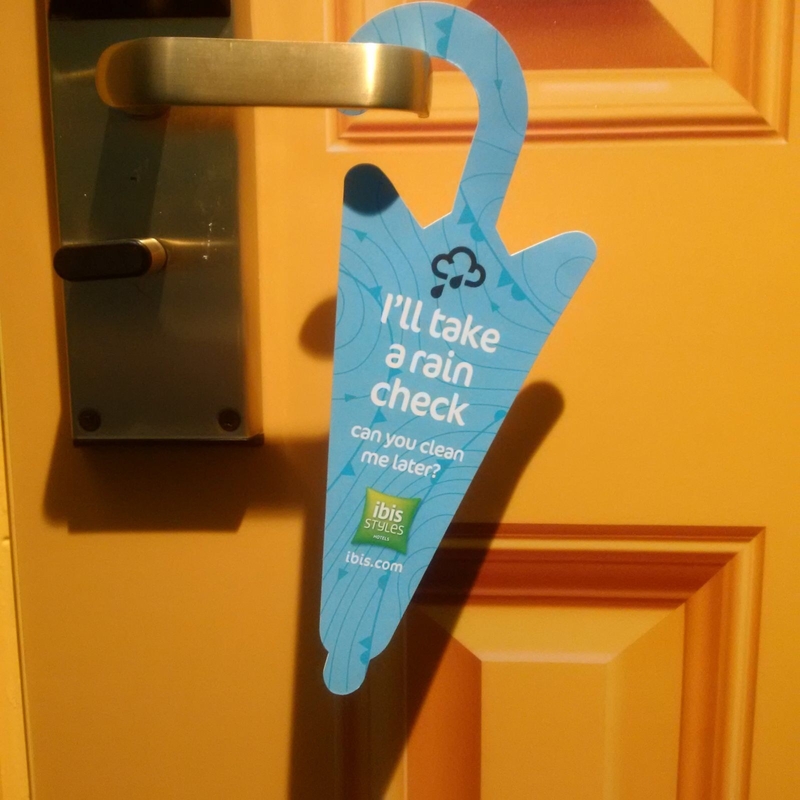 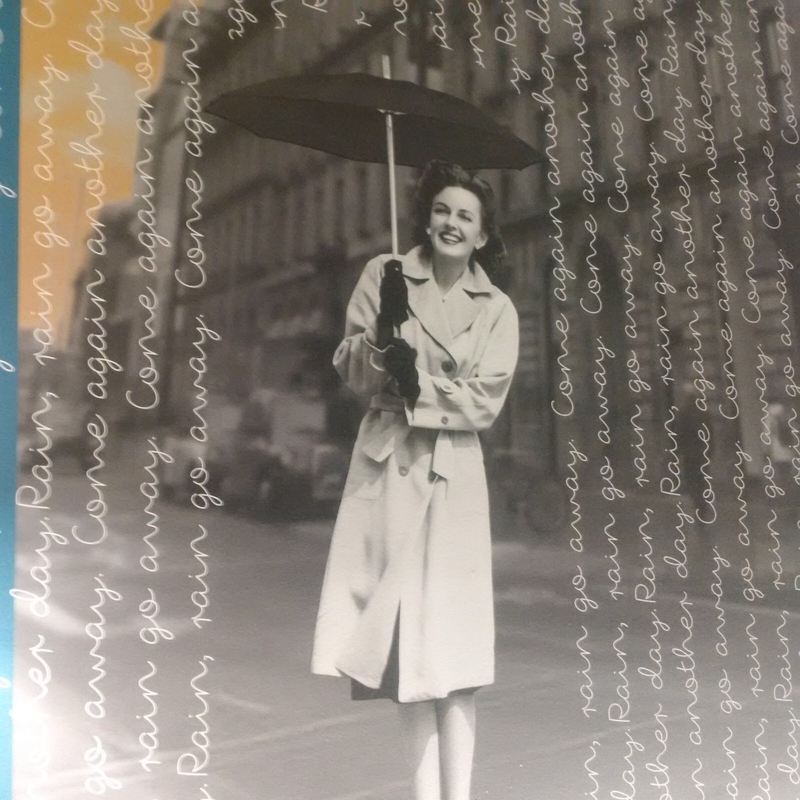 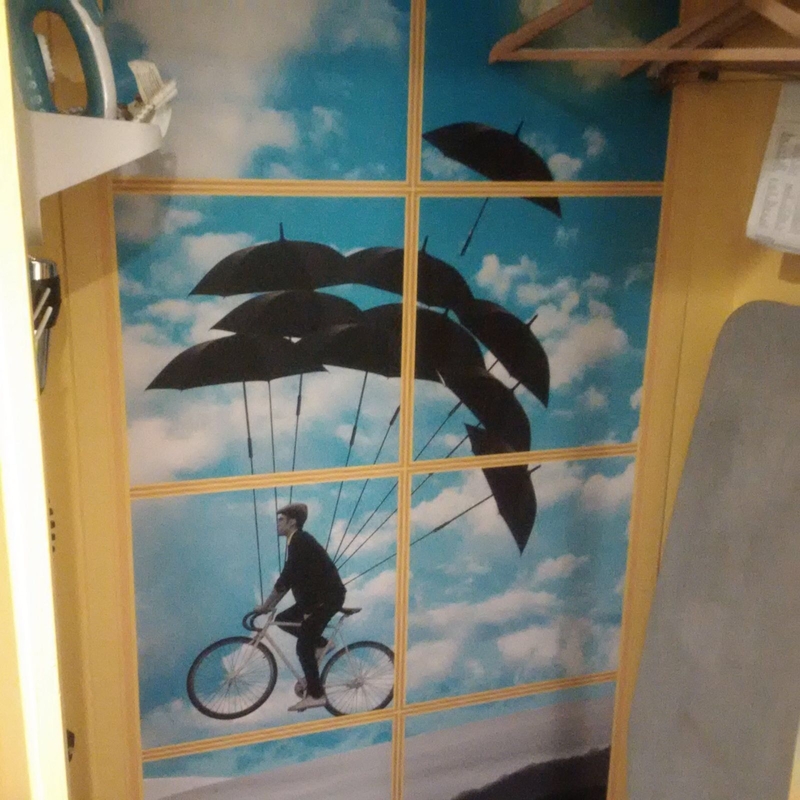 I arrived in a shower, in the wet now set off,

Eight days in the place I remained:

Seven days, seven nights and a quarter, I vow,

By Jove! it incessantly rained.

What then? not a day nor an hour was I dull:

The Lancashire lads played their part:

I found every friend of politeness brim full,

And myself in the midst of the arts.

May Manchester flourish! and if once again

By chance I should ere be brought hither,

I hope that from weeping the clouds may refrain,

And grant me a peep at fine weather.

The strange thing is that Manchester’s reputation as the rainiest UK city is entirely false. A comprehensive look at rainfall from 1981-2015 by water company Freeflush puts us a disappointing 15th.

Aside from Leeds, these are all places on the west side of the UK. Blame the Atlantic Ocean and the rotation of the earth for spinning water our way. The simple fact of the matter is Manchester is backed up against the Pennine hills, and thus, in the path of the prevailing south westerly Atlantic weather systems. This means the west is wetter than the east of the country. Leeds gets hit by the rain because, after all, the Pennines aren’t so huge a barrier to those scudding clouds.

But forget the amount of rain, maybe there’s a more telling measure. The rainfall might all come in one big splash, so maybe we need to know on how many days rain falls in Manchester.

We’re still not the wettest.

Glasgow has a whopping 170 days of rain and Belfast has 156 days. We have 152 days which is similar to all the other leading contenders aside from Plymouth which has ten fewer rainy days even though it has 140mm more rainfall.

If you want to live in the driest parts of the UK you have to scoot off to the rain shadow happy lands of East Anglia. Ipswich has a mere 107 days of rainfall. London has 109 days and 557mm a year of rain.

Why Manchester, rather than, say, Glasgow, has the greater reputation for rain can only be guessed.

This is our theory.

London and the South East have always been the home of the monarch and the government in Great Britain. The main routes between England and Scotland tended to go up the drier east, hence the A1 is on that side of the nation.

Then suddenly loads of Londoners started to have to pile north to the industrial metropolises of the north and west as the economy shifted. Manchester was the first such metropolis and its industrialisation the fullest. It was novel and shocking.

Londoners (and overseas visitors after having stopped in London first) came here and the combination of higher rainfall and smoke-filled industrialisation stained their press reports and their conversation. The stories were repeated in Britain, then repeated again and again and a reputation was created that became so firmly entrenched even the natives, albeit tongue-in-cheek, now swear by it.

So we might as well embrace the rep rather than reject it. Perhaps Ibis Styles Hotel has got it right.

In which case it was wholly appropriate after a first week of glorious sunshine during the Manchester 2002 Commonwealth Games, and a second week of decent weather, that buckets of precipitation should have been heaped on the worldwide televised closing ceremony.

To see the Premier of Victoria State in Australia, representing the 2006 host city Melbourne, accepting the honour of hosting the next Commonwealth Games, bending his head against the heavenly onslaught, his suit saturated, his hair plastered to his head, was strangely satisfying and more than a little amusing (you can view all that on this video at 49:32)

For the record if you think Manchester is rainy then it’s nothing compared to Bergen in Norway with 1,958mm of rainfall on 231 days. Meanwhile, Amsterdam might have less rain with 766mm but it rains on 65 more days. Of course, the Med gets it drier, Rome has a rainfall of just 837mm but on only 83 days, 69 fewer than Manchester. Also for the record, most overseas visitors when questioned aren’t aware of Manchester’s reputation for rain they just think it rains all the time across the UK.

But let’s finish with another celebration of our undeserved but self-adopted reputation. This is a poem by London poet Adrian Mitchell from four or so decades ago.

In Manchester there are a thousand puddles.

Cinema puddles in ambush at the exits,

Zebra-crossing puddles in dips of the dark stripes --

They lurk in the murk

Of the north-western evening

For the sake of their notorious joke,

Their only joke - to soak

The tights or trousers of the citizens.

Each splash and consequent curse is echoed by

In Manchester there lives the King of Puddles,

The Shah of Slosh, Splendifero of Splash,

Prince, Pasha and Pope of Puddledom.

Where? Somewhere. The rain-headed ruler

Disguised as an average, accidental mini-pool.

He is as scared as any other emperor,

For one night, all his soiled and soggy victims

A thousand rolls of blotting paper in their hands,

And drink his shadowed, one-joke life away.