Which Great British Menu chefs will deliver to your home?

It’s been over three months since the government closed the doors on the hospitality industry. Lockdown restrictions are now, some say prematurely, easing and restaurants are looking towards ways for people to dine out in a socially-distanced manner. Even with the introduction of novel solutions like outdoor glasshouses, perspex screens and waiters wearing visors, for many dining out will still be off the cards for some time.

The boxes were an instant success, selling out within minutes on release on the first two weeks

The good news is that even the fanciest restaurants in the country have temporarily adapted to offer some really exciting cook at home meal boxes. For the first time ever, you can now get food from a Great British Menu chef delivered to your door. So if it’s a special occasion, or you just feel like splashing out, you could be switching up your favourite local pizza delivery for the likes of a ‘Boursin’ lava lamp with sourdough, chicory root tiramisu or an octopus hotdog. Here are five Michelin star delivery options that celebrate the best of the North.

View this post on Instagram
Cooked by us. To be enjoyed in the comfort of your own home. 〰️ Order your menu for next Friday or Saturday by Tuesday 9am. 〰️ ▪️www.simonroganathome.co.uk▪️
A post shared by Simon Rogan at Home (@simonroganathome) on Jun 19, 2020 at 6:40am PDT

Number one in our Top 100 restaurants in the North, you can trace many a star chef’s career back to L'Enclume's whitewashed walls. The latest superstar chef from Simon Rogan’s stable is Tom Barnes who recently cooked his main course ‘Beatrix Potter’s Herdwick lamb’ at the series 15 banquet. Rogan launched veg boxes from his own farm ‘Our Farm’ early on in lockdown, packed with the kind of quirky veg you can’t normally get your mitts on. But now he has launched Simon Rogan at Home, with its own dedicated website.

There you can buy bakery items, booze and the brand new four-course dine-at-home meal boxes which can be accompanied by a bargain £25 wine flight curated by head sommelier Valentin Mouillard. Meals include homemade sourdough with whipped butter and a choice of meaty or veggie mains along with dishes like turnips from Our Farm, kale & red dulse seaweed and Belgrove rum baba with raspberries, muscovado & hazelnut. At the moment, delivery is only within the local area - see site for details - but we’re praying that it can be extended further afield. If you fancy a drive, you can always click and collect. Also launching soon is a service which sees L’Enclume and Rogan & Co chefs literally coming to your house to cook your dinner, with prices starting from £80 per head. 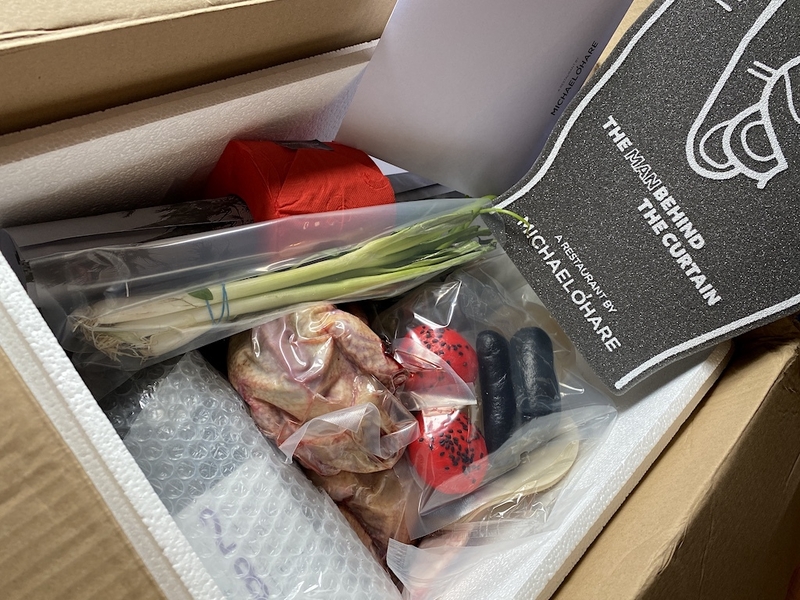 Restaurant: The Man Behind The Curtain

The Man Behind The Curtain has long been a cult-like destination for fine diners looking for something with edgy eccentricity - or at least those who like every usually-beige element of the dish dyed black or red. Love it or hate it, Michelin inspectors awarded the restaurant a star in 2015 and three AA Rosettes in 2016, which it has maintained ever since. Head honcho Michael O (what lovely)’Hare launched a cook-at-home box quite early on in the game which his loyal Instagram followers have been enjoying for several weeks already.

The Great British Menu winner turned mega-popular judge has couriered out chilled polystyrene boxes of everything from jerk lobster to octopus hotdog kits for diners to cook along with him at home via a live Instagram broadcast every Friday evening. This one is definitely not for the faint-hearted - as you can see from our review (coming soon). But it certainly is an experience, and there aren’t many of those going around at the moment.

View this post on Instagram
Tomorrow is the day. Our Made in Oldstead Boxes are launching Nationwide. We have our normal 2 days/2 three course meals box. We also have a small number of very special celebration boxes available including a stunning Beef Wellington using @randjyorkshiresfinest salt aged beef Fillet. Thank you for all the support 👨🏻‍🍳 link in bio
A post shared by Tommy Banks (@tommybanks) on Jun 12, 2020 at 12:08pm PDT

Restaurant: The Black Swan at Oldstead

Tommy Banks is another Great British Menu stalwart and his Black Swan at Oldstead won a Michelin star last year. Early on in lockdown, Tommy started mailing out bottles of pre-mixed, artisan cocktails for diners missing their fix of damson sazerac or rhubarb negroni; these were followed by the launch of his Made in Oldstead cook-at-home boxes.

There are two types of box to choose from: a food box with two three-course meals each serving two people for £75 and a celebration box with five extra special tasting courses and a bottle of wine for £120. Dishes from the three-course menus include smoked ham hock terrine, chicken with lemon verbena & a pickled walnut & smoked egg yolk salad and strawberry & woodruff cheesecake. The celebration box pulls out all the stops with its five courses including beetroot cooked in beef fat with cod's roe, prime aged beef wellington and a chicory root tiramisu - with that bottle of wine to boot. Having started with a more local radius, these kits can now be delivered nationwide but be quick! They sell out very fast. You can still get the cocktails too. 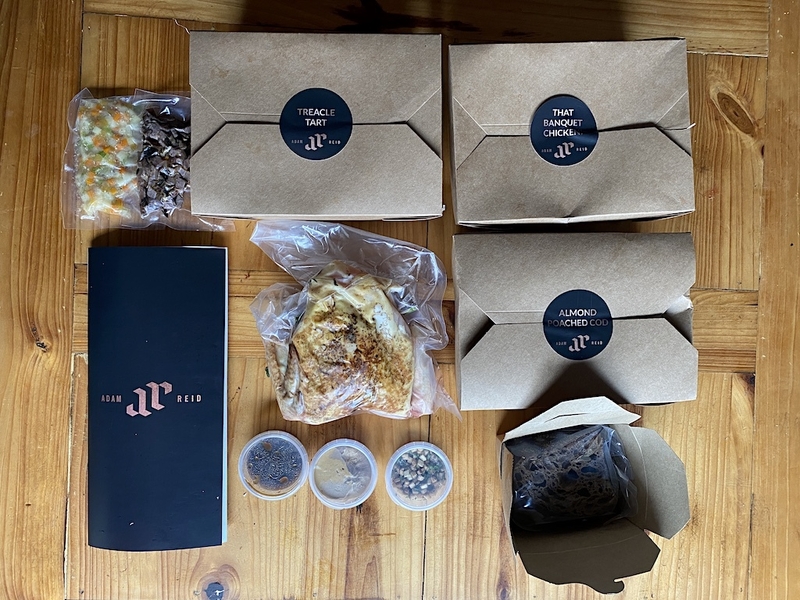 Restaurant: The French at The Midland

Manchester’s dining darling Adam Reid mans the pans at one of the best restaurants in the city, The French at The Midland Hotel. Ads is famous for his down to earth approach to culinary greatness and his Great British Menu-winning banquet chicken dish. His first dalliance with home delivery has seen him launch a cook-at-home version of his entire GBM menu from tater ash to treacle tart - keep an eye out for our review coming soon.

One of the later chefs to launch home delivery, Adam said he wanted to get it just right. The boxes were an instant success, selling out within minutes on release on the first two weeks so we envisage the service continuing for a while yet. Adam is also championing English wine with a trio of bottles from Gusborne (£74) available as an optional extra to go with the meal. Looking forward, we can expect roast dinners and more to your door from this Manc grafter. 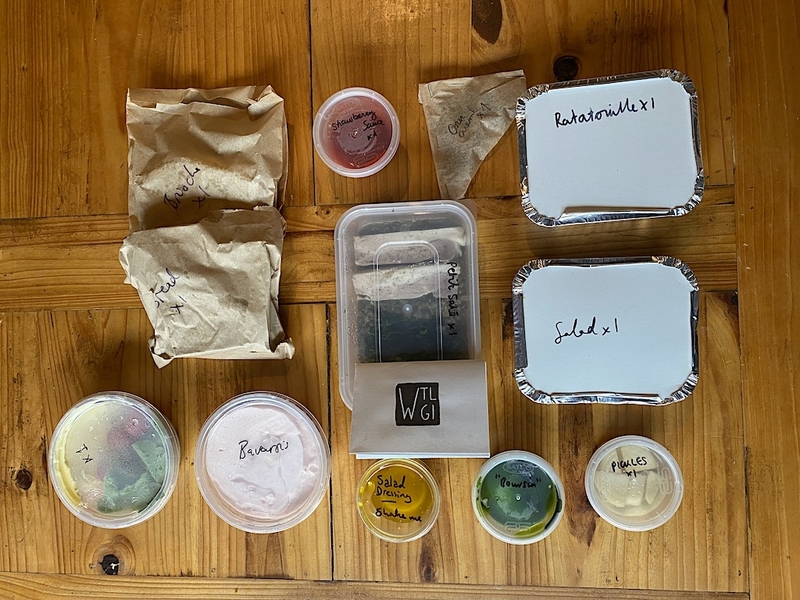 Restaurant: Where The Light Gets In

Stockport’s own Sam Buckley made a fleeting appearance on this year’s GBM and although he didn’t win the heat, it reminded us why we love him. Buckley’s unique restaurant Where The Light Gets In is heavily focused on sustainability, using every last scrap of locally reared livestock as well as pickling and preserving everything to aim for as little waste as possible. This approach has one step in the make-do-and-mend past while also being ahead of the hottest food trends which are rightly focused on biodynamics and respect for the natural world.

The Pickle Factory, then, is an appropriate temporary rebranding for WTLGI’s curious and clever cook-at-home packs which can be eaten as a series of small courses or laid out in feast like fashion. We loved the one we tried and, if you’re adventurous and earth-positive, you probably will too. Grab a bottle of natural wine while you’re at it and you'll be supporting even more up-and-coming indie producers who put people before huge profits.