Davey Brett gets lost in the broth

There was one persistent food recommendation on a recent visit to Stockport and it was a place called The Mekong Cat.

You’ve got to go, everyone told us, from clothes shop owners to our tour guide for the day, Where The Light Gets In chef owner Sam Buckley. The enthusiasm for the place was so strong that upon getting the train home, and seeing police at the station door, my hand moved for the email receipt on my phone as proof.

Luckily exit documents weren’t needed. It probably helped that one of our party was speckled in broth. They knew where we’d been.

The Mekong Cat is a South East Asian noodle restaurant that sits on Lower Hillgate, the crest of the hill that rolls into the Underbank. The restaurant, which opened in February, is owned by the same people as Cambodian restaurant Kambuja in Marple. Owner Y Sok has local hero status.

Inside, The Mekong Cat is homely. The space is compact, with booth-style bench seating on one wall and a scattering of tables. The kitchen is open at the back of the restaurant and brighter than the dining area, giving it a stage-like quality. A foreign language cover of A Hard Day’s Night by The Beatles is playing at a sociable volume.

It’s BYOB (£2 corkage) at The Mekong Cat so it’s worth stocking up before you arrive as there’s no alcohol on the menu and not much in the way of an off-licence close by. Noodle dishes (spanning Thai, Vietnamese and Cambodian) dominate the menu in broth and non-broth forms, with a little section for rice dishes and banh mi. On the back there’s starters and wings, the latter taking in the cauliflower variety. Vegan menus are offered upon arrival which is a welcoming touch.

Now let us begin. Prawn summer rolls (£5) and pork crispy rolls (£5) to start. The summer rolls are wonderful. Each bite delivers a fragrant, fresh crunch with the accompanying peanut dip adding nuttiness and salt. It’s a dip I’d happily eat from a bucket with a spoon. The final bite of my roll is enjoyably chewy, and I scoop up the spilled rice noodles, carrot, cucumber, lettuce and drag them all through the last dregs of sauce for one final nutty hoorah. Waste not, want more.

Pork crispy rolls pack equal crunch. Inhale them too fast (it’s difficult not to) and the chilli will catch you off guard and you’ll be grabbing for the nearest water. Each roll packs minced pork, glass noodles, carrots, wood ear mushrooms and onions. The chef recommends wrapping them in lettuce and mint and we’re happy to oblige.

The mains arrive not long after. It’s a triple threat of cold, wet and dark outside so when someone parks a steaming bowl of vibrant red broth in front of you - all meats, herbs and noodles - the world feels at balance.

There’s a draught coming from the door that’s tickled our ankles and turned the underside of our table into something of a wind tunnel up until this point but the moment we dig into our respective mains, it’s forgotten. Cancelled out by the chilli and steam rising from our respective bowls and plates.

Mine is the kar ko, a Cambodian stew, and it’s a glistening pool of red and orange with thin noodles, generous hunks of beef, assorted veg and topped with herbs. The broth is mesmerising. Deep, beefy, with cinnamon and star anise and an aesthetic that brings to mind a red version of those pictures of the Adriatic you see where the blue shifts from turquoise to navy from beach to open sea. A lighter ring of orange laps the side of the bowl before turning to a deep, red, meaty abyss in the middle.

Similar wonders are taking place across the table. Cha kroueng is a hot one. A delayed chilli fuse follows each bite of the spicy lemongrass and tamarind-infused dish. Hearty to its core. You’re here to be filled. It’s stick-to-your-ribs food.

This brings us to the cornucopia of seafood and meat that is the Phnom Penh noodles with pork and seafood. Twelve English pounds for a veritable buffet in a bowl. Flat rice noodles, ground pork, sliced pork, crab sticks, sliced fish, prawns and squid all boosted with thai basil and a squeeze of lime. The broth is noticeably lighter than the Cha Kroueng but no less time has gone into maturing its bountiful existence. Minimum four hours according to the menu.

Here comes the post-script. We could’ve rolled down that hill as we walked back down to the Underbank for a pint before the train. Filled to the gills with noodles, meats and broth. What more do you want on a chilly Wednesday night in February? You want to go and eat with friends, you want to fall in love with whatever plate or bowl is put in front of you and you want to stumble out into the night feeling full, enriched and complete.

If you go eat at The Mekong Cat that’s what you get. 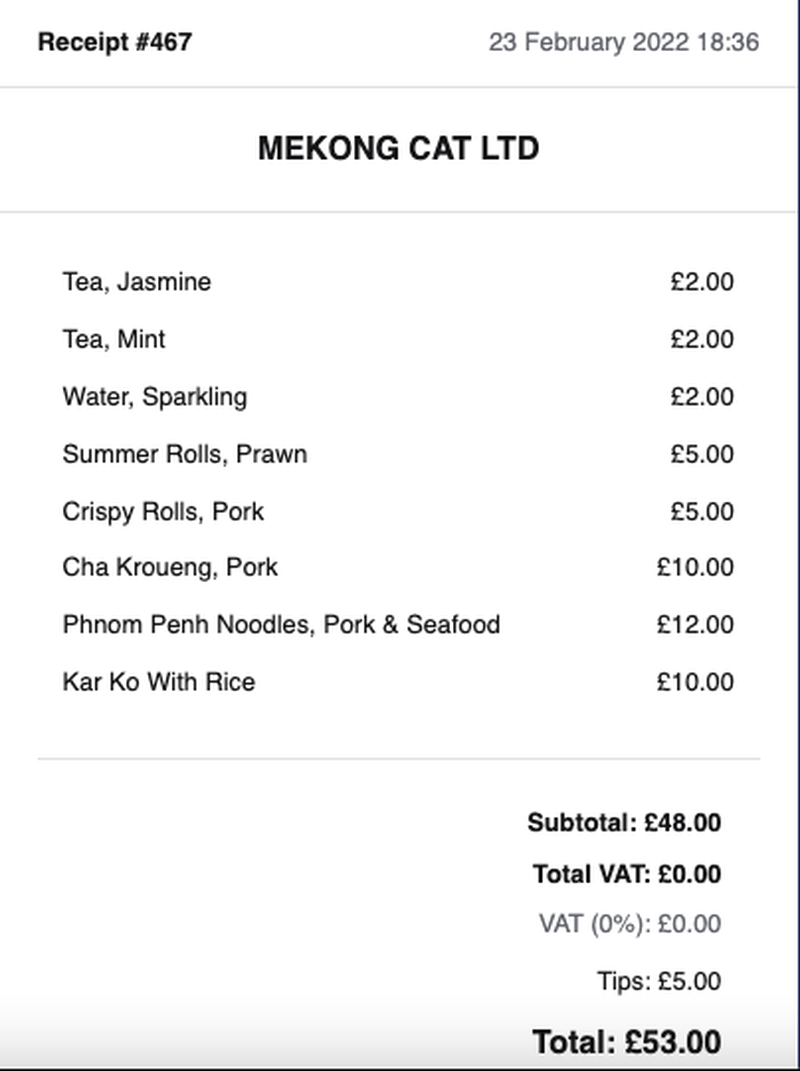