Fancy a visit to Denmark? – Aarhus is a haunting place

TRAPPED in a bar by a frenetic thunderstorm - worse things can happen - watching the streets of downtown Aarhus awash, its good citizens pelting for cover, while we down some of the globe’s finest craft beers courtesy of Mikkeller, ‘the gypsy brewers’. Their clear, honeyish Jaeger IPA is heavenly - and Aarhus has been rather good, too.

Copenhagen’s indie beer heroes have an outpost in Denmark’s second city on hip Jægergårdsgade, south of the rail station. It seemed the perfect final pit-stop in the recent European City of Culture before heading out along the East Jutland coast.

Standard bearers from that perception-altering year (2017) include the ARoS Contemporary Art Museum with its rainbow rooftop installation dominating the city skyline, and post-modernist newcomers such as the ‘Iceberg’ apartment complex at the tip of the docklands-transforming Aaarhus Ø quarter.

All eye-catching, but our day had been dominated by an out-of-town homage not on everyone’s bucket list… back into prehistory. Just a bus ride away 30 minutes south, inside another remarkable (seventies) building, grass roofed and hunkered into the landscape – the Moesgaard Museum.

Awaiting us there ‘Grauballe Man’. Dug from the Jutland bogs in 1952, the body eerily preserved by peat since the third century BC, the throat slashed, suggesting he might have been a human sacrifice.

The photographs burn into your mind; to see this leathery-tanned Iron Age icon in the flesh, so to speak, is among the most moving experiences on the planet. And blessedly for a while we had the room where he is exhibited to ourselves to mouth the opening lines of Seamus Heaney’s great poem: ‘As if he had been poured in tar, he lies on a pillow of turf and seems to weep the black river of himself.” 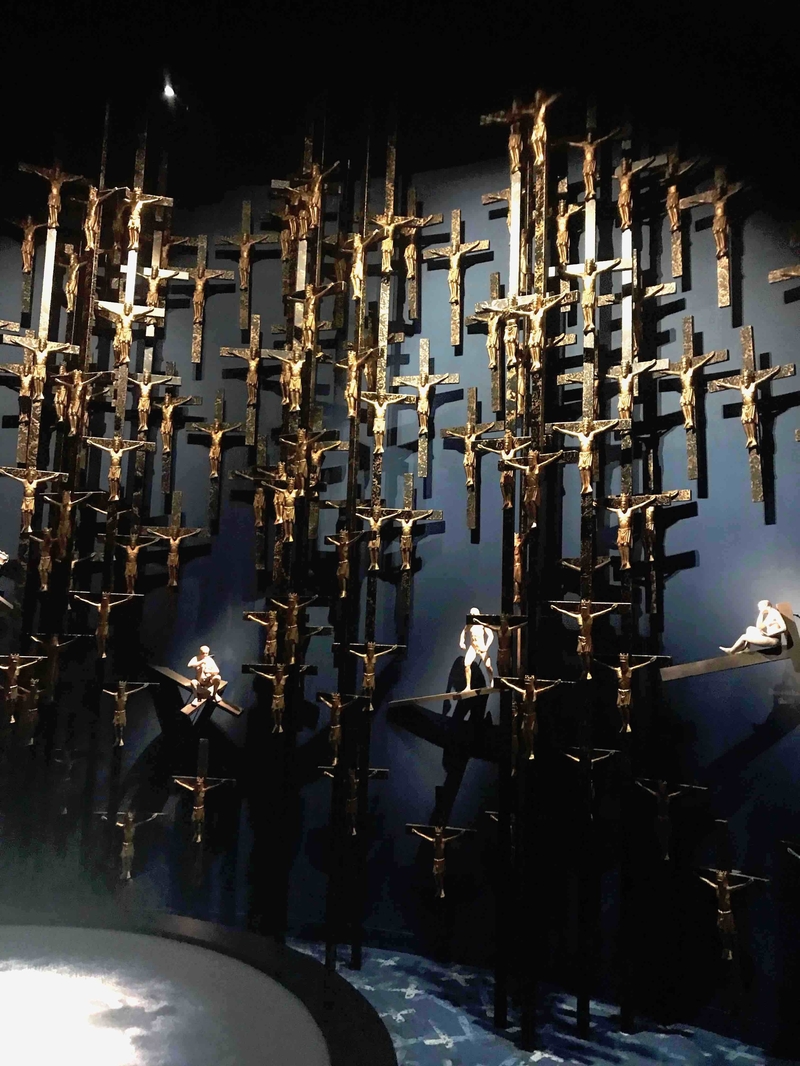 The rest of the Moesgaard is a thrilling, interactive journey into Danish, Scandinavian and European history and culture, Stone Age, Bronze Age, Iron Age and onwards – a treasure house of artefacts, but also pandering to the inner kid with some thundering, plundering Viking recreations. 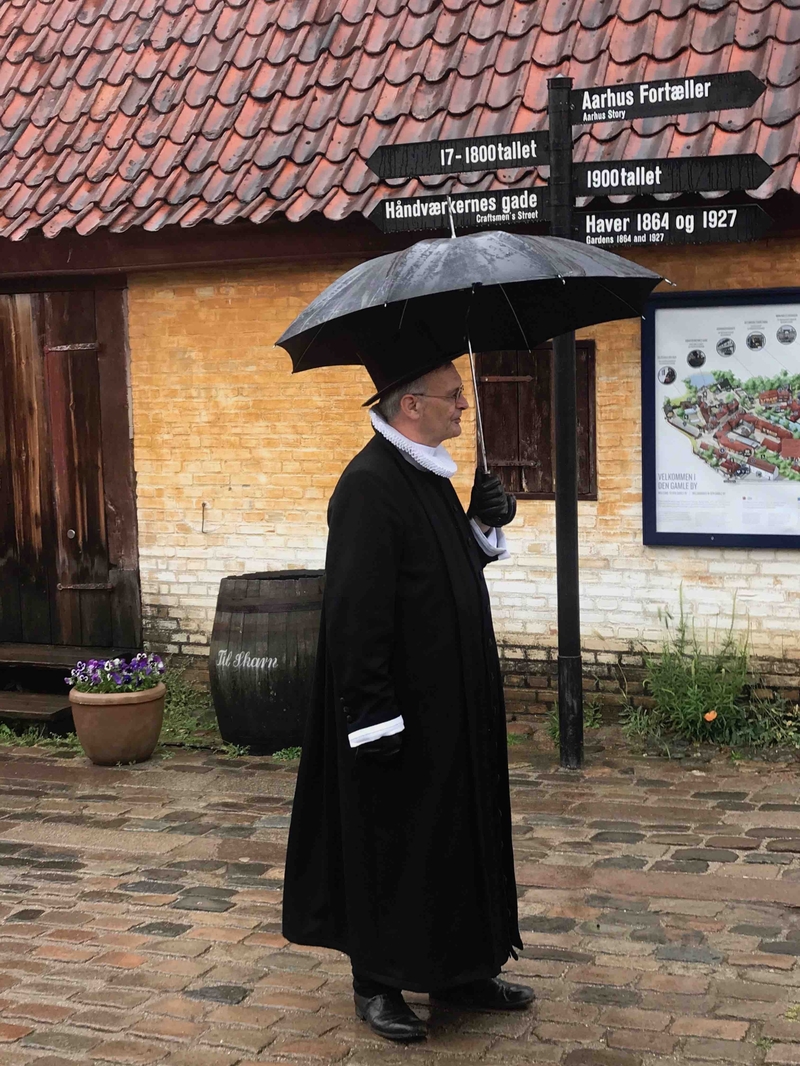 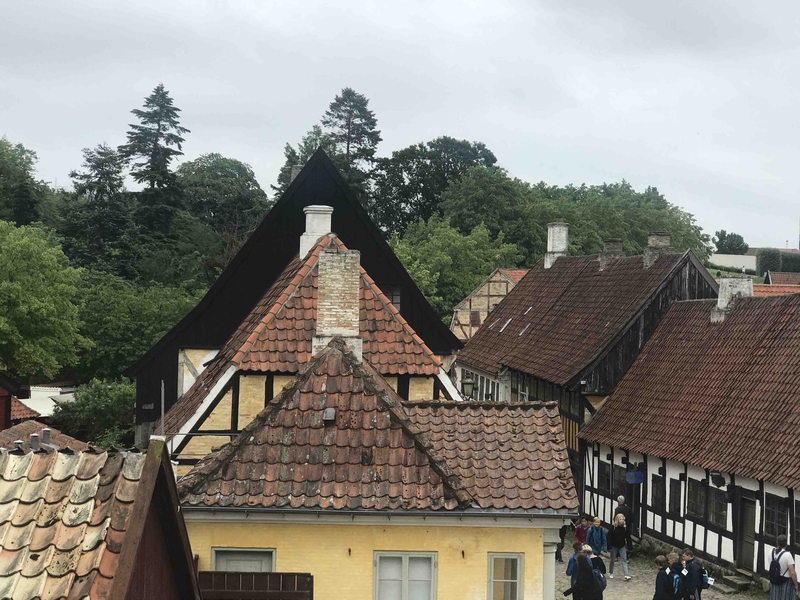 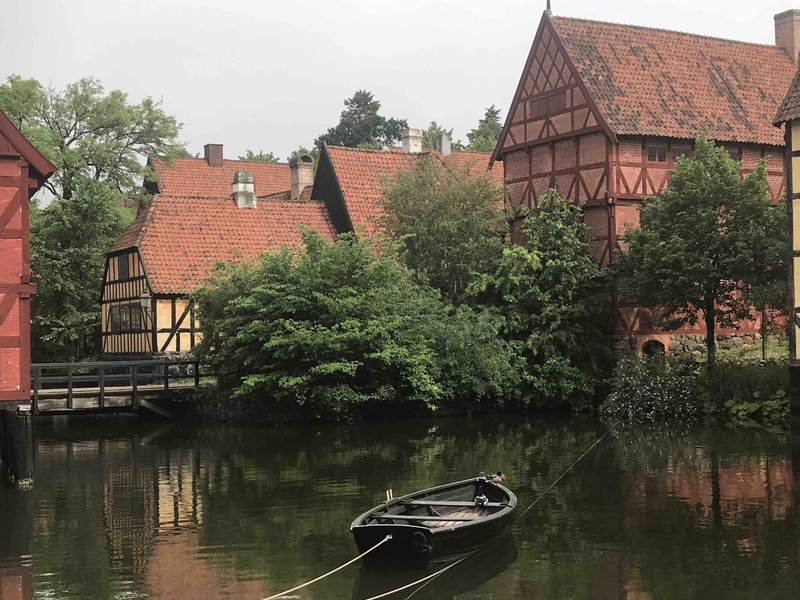 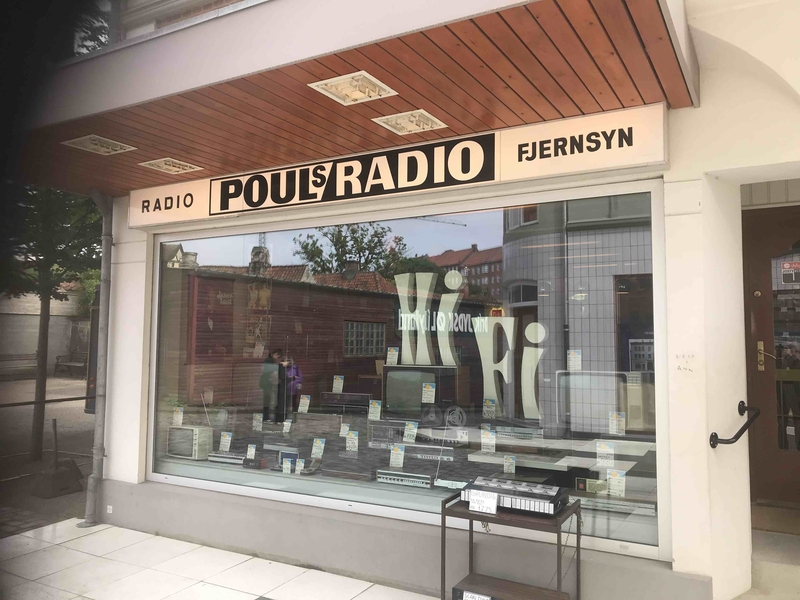 All of which makes family-friendly open air museum Den Gamle By seem positively contemporary and definitely more gentle. It means ‘Old Town’ and is just that. Originally a one-man project founded in 1909, it recreates townscapes from three decades – 1860s, 1920s and 1970s – via 75 historical houses relocated from around Denmark. Plus lots of exhibitions, most essential being the informative ‘Aarhus Story’.

We worried there might be too many extras in period dress populating the bakeries, cobblers - Onkel Tom Cobbles and all, but it was very relaxed and evocative. During our trip we had mixed experiences of Scandi speciality Smörgåsbord, but the open sandwiches served in Wineke’s Cellar beneath the Mintmaster’s House (1683, poshest reconstruction with Rococo decorative twirls) were splendid.

Afterwards we wandered up the hill to the city’s free to enter Botanical Gardens with butterfly-thronged tropical houses. From here there are good views across Aarhus.

Panoramic viewpoints in the city proper include the rooftop terrace and skywalk at the city’s premier department store, Saaling, on the Söndergarde. Just take the lift and stairs to the top floor and enjoy reasonably priced wines and cocktails while taking in the whole dock area, redeveloped or working.

The rest of the world class collection, with the likes of Andy Warhol and Grayson Perry,  is equally rewarding and well set out. If time is short head for Ron Mueck’s five-metre-tall sculpture of a crouching boy, first exhibited at our own Millennium Dome in 2000. Oh, and you can play table tennis among the installations in the basement.

Access is less frequent to the spired tower of the Domkirk, but it boasts another splendid view. The vast red brick expanse of this Cathedral dominates the main square, Store Torv. Originally built in Romanesque style in 1201, three centuries later it was given a Gothic makeover at which time it gained its magnificent Bernt Notke altarpiece, the font and frescoes. It’s dedicated to the patron saint of sailors, St Clemens appropriately enough with the waterfront just yards away.

Our base, the budget hotel, Cabinn, was nearby, handy for the Latin Quarter. The oldest part of the city offers a maze of streets and concealed courtyards to explore, half-timbered, flower-bedecked. It’s laidback by day and fun after dusk when the bars and cafes are rammed. 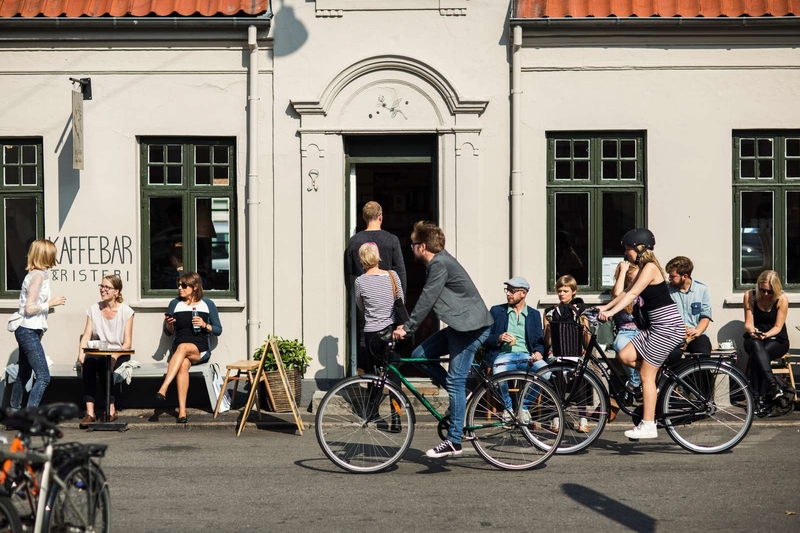 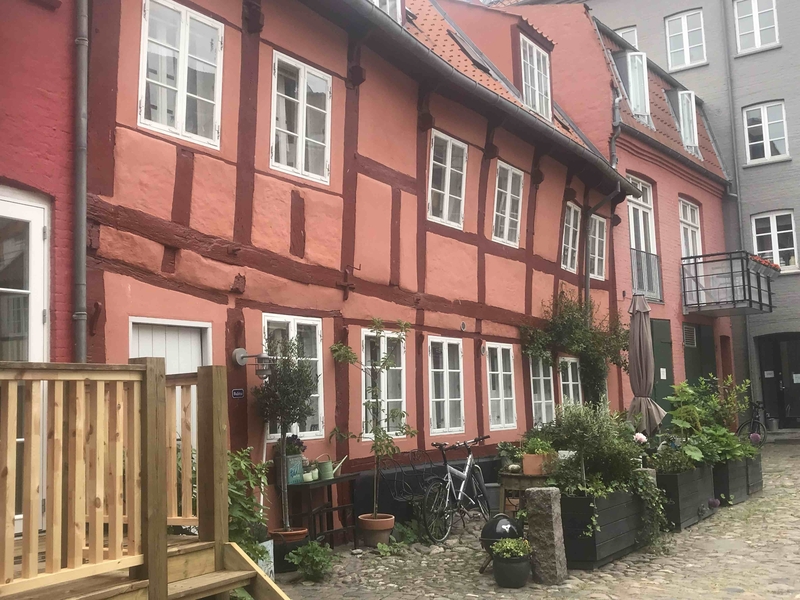 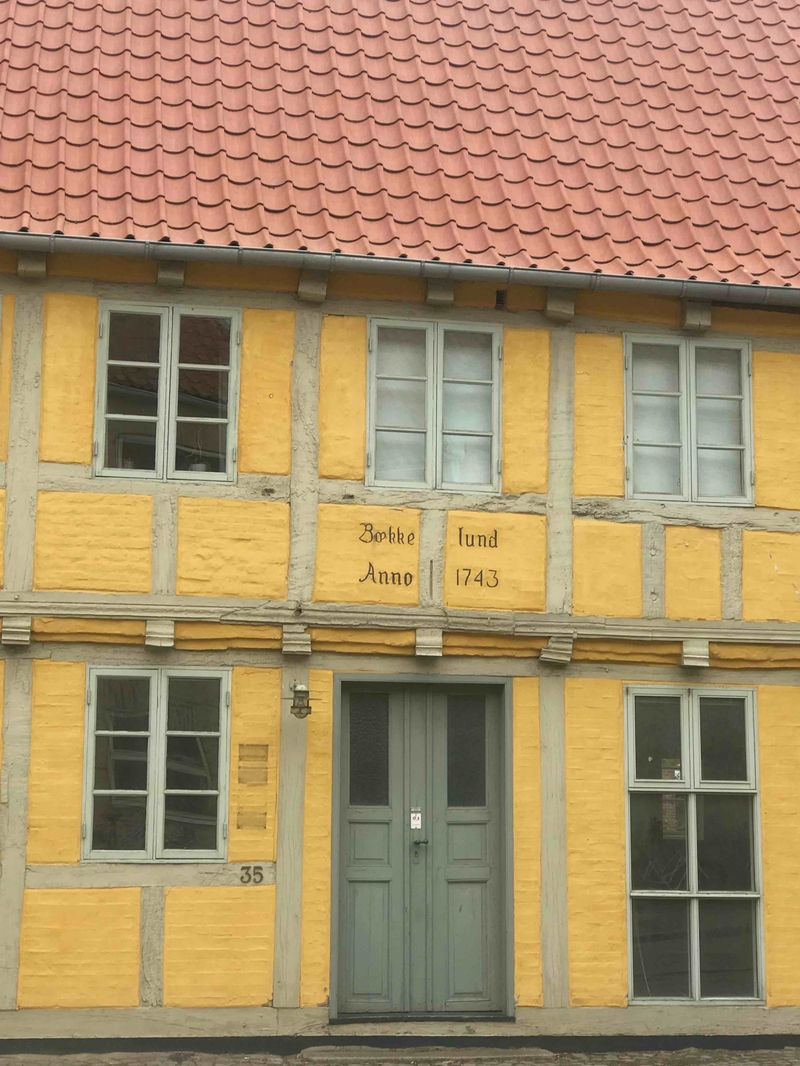 Designer shopping seems to be centred around the picturesque Graven, where you can also get your Nordic coffee fix at La Cabra, but our favourite thoroughfare was the Mejlgade, home to our Aarhus ‘local’, Mig og Ølsnedkeren, a craft beer mecca.

The Latin Quarter hosts a couple of hip but eye-wateringly expensive Michelin-starred restaurants, Gastromé and Domestic. We dined handsomely at a more casual New Nordic spot, Langhoff og Juul in Guldsmedgade. Even more on-trend and similarly devoted to inspiring local produce was Pondus, a bistro spawned by Substans, arguably the city’s best Michelin joint and currently relocating to the resurgent waterside. Pondus’s set menu was deceptively simple and classy compared with rival establishments along the dining-focused Aarhus Canal.

We visited two food halls too – Aarhus Central Food Market (tip: go for the award-winning Hungry Dane Burgers) and, much jollier, Aarhus Street Food, a recent arrival, inevitably based in recycled shipping containers. Our visit to the latter coincided with the city’s annual Royal Run, offering a range of sweaty challenges up to 10K. Participants thronged the 30 or stalls in the hall just behind the bus station on Ny Banegaardsgade.

We fought shy of ordering one unique local delicacy, curry dumplings, from ‘Grandma’s House’, settling instead for banh-mi and bao buns, washed down with local micro brews from the Ølfred bar.

To sample a retail produce market with fish, cheese and organic veg head down beyond Jægergårdsgade to Ingerslevs Boulevard in trendy Frederiksbjerg. The open air market is open Wednesday and Saturday 8am-2pm. 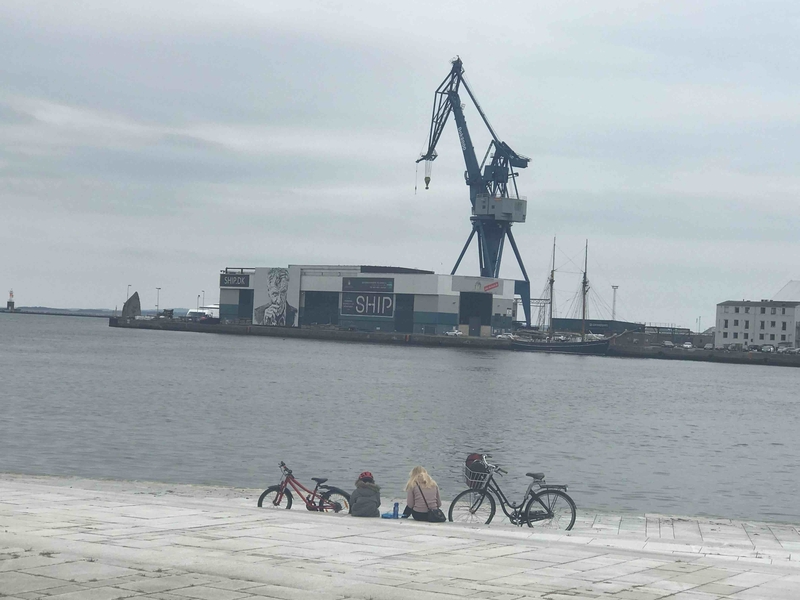 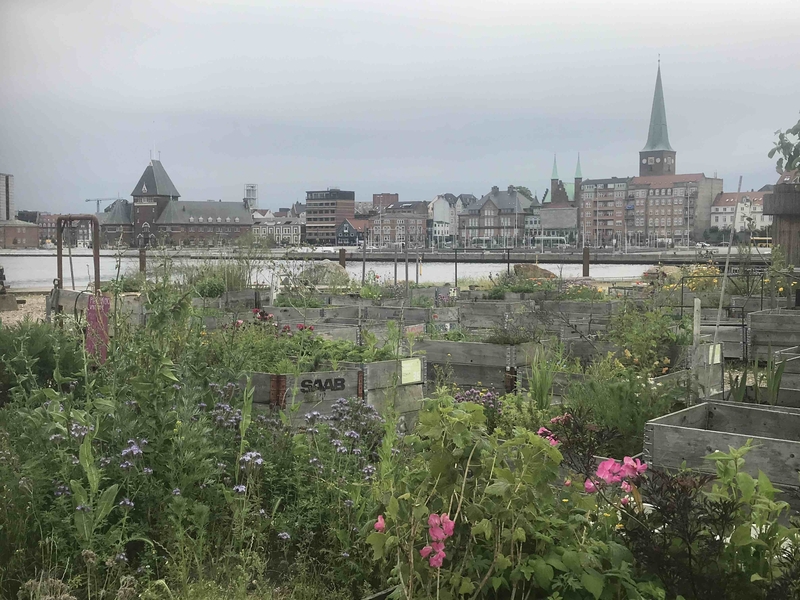 The regeneration of the former dock area is still a work in progress, but it’s worth hiring a bike to ride up to check out Aaarhus Ø’s adventurous architectural forays, stopping off for watersports and street food opportunities.

We loved a quirkier more homespun venue on Inge Lehmanns Gade. The Dome of Visions arrived from Copenhagen five years ago as a sustainable timber round house, comprised of 588 curved beams with 186 different shapes. Inside it’s a lush greenhouse, hosting a cafe which looks across the harbour at the still working shipping docks. Next door among gardens is a mushroom farm based on spent coffee grounds.

You suspect this whole waterfront site will eventually be developed commercially, bridging the gap between Aaarhus Ø and Dokk1, a monumental events space/library that opened in 2015.

It too has its own special Danish quirks. Its artwork centrepiece is a three ton bronze pipe bell, The Gong, which new parents can ring remotely from the University Hospital maternity ward when a child is born, while the ceiling of the underground car park features a large art installation known as Magic Mushrooms, a downscaled model of an imaginary city turned upside down.

From outside Dokk1 we caught the bus to Ebeltoft 50km away along the coast in the Aarhus hinterland known as Djursland. A chance to chill by the sea in a wonderful old port town of cobbles and hollyhocks that almost defines sleepy.

It delivered perfect blue skies, too, which enhanced the balcony bay view from our hotel, Langhoff og Juul, chic coastal outpost of our Latin Quarter dinner spot. The food and wine were equally good after a day’s rambling around.

Ebeltoft’s two major tourist attractions are adjacent on the strand along from the Langhoff. The Frigate Jylland is one of the world's largest wooden warships, is preserved as a museum, its tall masts and sails visible from every corner of the town. Both a sailing ship and a screw-propelled steam frigate, she took part in the Battle of Heligoland in 1864. There’s amusement there for all the family. Accompany a climbing instructor 90ft up the rigging or help load a 30 pound muzzle loading cannon (then cover your ears when it’s fired).

A quieter treat is the famous Glass Museum, in the former Customs House, celebrating contemporary glass from across the world with more than 1,600 pieces and regularly changing exhibitions.

We were happy just to wander up into the top end of the idyllic old town. Half-timbered and half-empty, it felt out of time. The sun was blazing.so we sought sanctuary in the white spired church, set apart, but a service was about to begin and the pastor threw us a stern look.

In a town that has attracted many artisan glassmakers, the plan was (there's a theme developing here) to toast our imminent departure with a glass of something. At Mig og Ølsnedkeren and Mikkeler we’d enjoyed beers from Ebeltoft Farm Brewery. Alas, the taproom on a working farm turned out to be 12km away. Too much for these two foot soldiers. Instead we drank wine, French, on our balcony and revelled in a quite epic sunset.

Neil Sowerby flew to Aarhus with SAS Scandinavian Airlines, which runs a thrice weekly service most of the year from Manchester Airport. In Aarhus he stayed at the Cabinn Hotel, Kannikegade 14, 8000 Aarhus and in Ebeltoft at the Langhoff og Juul Boutique Hotel, Ndr. Strandvej 3, 8400.

Note: the Cathedral is shut for renovations for eight months from September 2019.

An AarhusCard gives unlimited travel, plus free or discounted entry to many of the city’s headline attractions, and costs Dkr 329 (£40) for 24 hours to Dkr 749 (£90) for 120 hours. Cards can be purchased at the bus station and most attractions. The main tourist centre can be found at Dokk1, where you can use free online touch screens for information and ideas.

How to set yourself for the new year with House Of Evelyn
What you say
Got an account? Login, to comment/rant.
0 Opinions
Read Next
● / Health + Fitness 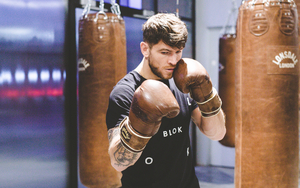 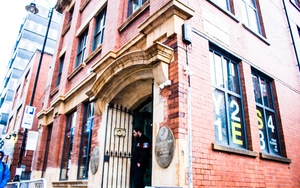 Everything’s Gone Green with a wellness weekend at Yes

Everything’s Gone Green with a wellness weekend at Yes
● / Venues 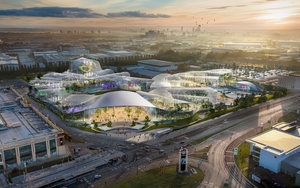 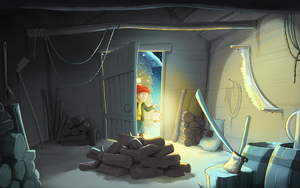 Written by Michael Morpurgo, Mimi and the Mountain Dragon will premiere on BBC One