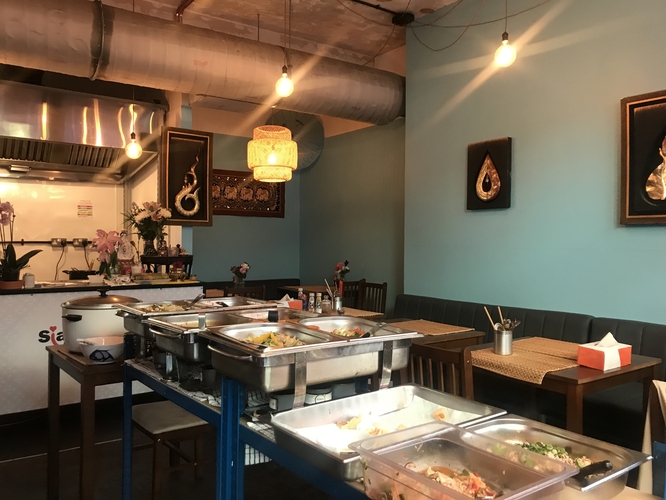 Siam Smiles still wears a smile. It had to move from its George Street location in Chinatown when the rents were hiked up, but is now comfortably ensconced in a small unit on that cute little run of food and drink that is Deansgate Mews.

The new space is tiny but in fine weather has a terrace into which it can spread. You can choose from the buffet or the menu. The former is £9.95 and seemed to be being lapped up by several diners including a large table of Singapore Airlines staff. Apparently aircrew from Singapore Airlines were mortified when the original place closed down and were delighted to seek out the new, not very obvious location, when it re-opened. Different crews are in Siam Smiles every couple of days.

Siam is the old Western name for Thailand of course, it’s curious how so many world cuisines in Manchester prefer to market themselves on the old names, Persia not Iran and Peking not Beijing for example. Maybe they think it gives their venues the gravitas of age, pedigree and tradition. Certainly Siam Smiles claims to be authentic with its cuisine, although never having been to Thailand I can’t say it is for sure.

It feels the part though, this is unadorned, unfussy grub packed through with good flavours. We had two cracking dishes. Kiew Going Moo, a noodle soup (£7.50) came with a rich broth, light pork beautifully timed and the bit best of all, some cracking dumplings which ramped up the meal to a proper stomach filler. The pak choi and coriander added more flavour. At this price this is a steal, it would be £2-£3 more expensive in say Wagamama.

My hot, hot, hot dish, Khang Bed Yang, came with gloriously sticky rice as the perfect accompaniment. It looked a powerfully colourful treat too and included beans, water chestnut, courgette, tomatoes, chillies galore and lumps of duck. It was again a filling meal but also totally entertaining, a riot of heat, meat and vegetables that managed to convey sweetness along with the fire. It was tropical in colour and flavour. At £9.50 it was again great value.

I’ve been having a good year with Oriental restaurants, a highlight being the magnificent fun with superb food that is One Plus Restaurant on Charles Street. Annyeong on Chapel Walks was another success. The new places, often low-key in decor rather than sporting an over-designed or flash interior seem to have a verve and vigour, a spring in their step, that many expensively backed outlets lack.

It smells like indie spirit to me. These are family businesses that provide the family income and that’s clear from the service which never fails in being anything less than enthusiastic. The way the dishes are put together and the flavours delivered seem to carry an authenticity that is often one of the virtues of home-cooking. That is very welcome.

Siam Smiles will be a grand place for lunch and evening food. It is reasonably priced and packs a delightful food punch. There is no licence yet so it’s bring your own booze or go teetotal. The licence will follow soon, but I’d go and have a bowl of something sooner rather than later. Just remember it’s at Deansgate Mews, an elevated line of outlets up the stairs that break the long Deansgate facade of the Great Northern, on the way to the Odeon cinema. It’s worth seeking out.