IS peanut butter really the snack of choice for badgers? No validation unearthed in a snuffle through Badgerlands, Patrick Barkham’s definitive account of all things brock. Still we followed Griffon Forest Holiday Lodges’ badger-luring tip, smearing the sticky treat along our decking edge as dusk fell. Barkham’s book is appropriately subtitled “The Twilight World of Britain’s Most Enigmatic Animal’ and the enigma was about to take very solid shape as we, the family in the forest, held our breath.

Not long out of the hot tub, in dressing gowns, a glass of complimentary Cava at our elbow, the dogs raising no alarm bells, we had no initial inkling badgers were afoot. Then suddenly we felt their presence just beyond the open patio doors. Out of the dark shrubbery, a glimmer of eyes, then two black and white pelts caught in the flare of the outside lamps. A dash for a camera phone was in vain – my snapshot blurred rumps beating a retreat. No trace of Whole Earth’s finest crunchy stuff left, just a few cracker crumbs.

The second night of our stay a heavy downpour washed away any chance of a repeat sighting. Cosy in their burrows, the resident badger colony took a rain check. Even Griffon’s CCTV cameras trained on the resort’s primary sett and relayed to each of the lodges drew a blank… and come dawn we mopped soggy peanut goo off the planks.

Despite controversial culling of our largest carnivore/predator, there are still more badgers per square mile in Britain than in any other country. Yet they remain elusive. Down to their nocturnal habits and natural reserve. Hence what a big selling point their presence is at Griffon Forest, a luxury lodge resort first created two decades ago in 100 acres of woodland 10 miles north east of York.

In those pioneering days there were just six cabins, a far cry from today’s 55 luxury lodges, all with hot tubs, the pick of which are the ‘Poachers Premier’ and ‘Gardeners Premier’. We stayed in the latter, two bedrooms each with a four-poster and en suite with jacuzzi. It accommodated myself, my wife, daughter and granddaughter plus Captain Smidge the chihuahua and parson russell Toro.

In these cautious, self-distancing staycation times the well-spaced lodges, set within mixed woodlands, have come into their own. Rustic yet restrained luxury in a gorgeous setting. We spent an entire afternoon wandering dappled forest paths, on squirrel and deer alert, feeling positively primeval, even though the frantic A64 into York is only just over the horizon.

OK, the family-run business also includes the adjacent Sandburn Hall 18-hole championship course with an academy, sports bar, golf shop, Tyke restaurant and, a work in progress, 40-bedroom hotel. From the lodges, you wouldn’t realise they were, though, but it’s handy to know takeaway pizzas are only a 10 minute amble away.

We took advantage with a couple of large pepperonis to share, even though we had stocked up on groceries en route at the award-winning Balloon Tree Farm just  a 10 minute drive at Gate Helmsley on the A166 Bridlington road. In spring and summer it’s a pick your own operation, but the award-winning farm shop/cafe  is open all year round with some superior foodstuffs on offer. Look for the ultimate free range chicken from Loose Birds at Harome (they supply the legendary Star Inn there). And yes, the shop does sell peanut butter.

If you need to stock up on booze to lubricate self-isolation, check out Field and Fawcett wine merchant and deli at the roundabout where the A166 leaves the A64. After which it’s time to settle down in the bosom of Mother Nature… 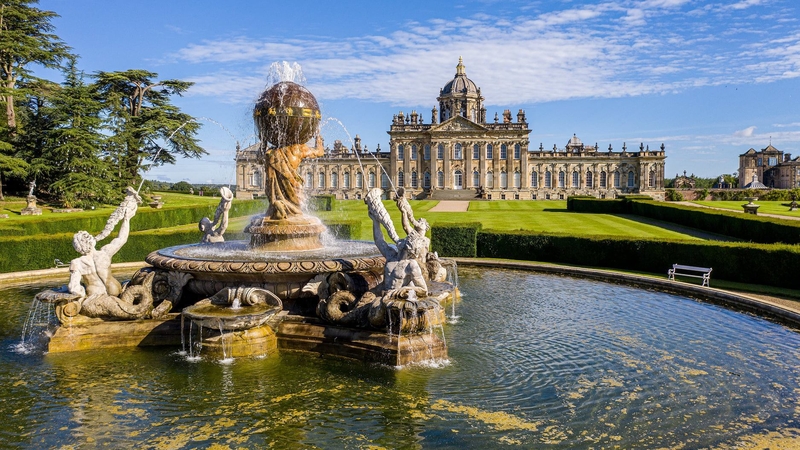 Brideshead Revisited is definitely off the radar of most Millennials, bringing their kids for a day-out, complete with adventure playgrounds, at Yorkshire’s premier stately home, just eight miles north of Griffon Forest. It’s nearly 40 years (when star Jeremy Irons were a lad) since Granada TV camped camped here to film their lavish adaptation of Evelyn Waugh’s novel about gilded Oxford youth and their teddy bear accessories. You can see why they chose Vanburgh’s Baroque palace, all glowing limestone on its North York Moors spur. Only Blenheim can compete on this scale. Inside are numerous treasure still owned by the Howard family; outside is equally spectacular. Check out the famous Ray Wood with its unique collection of rare trees and shrub, the Temple of the Four Winds and Hawksmoor’s Mausoleum, a palace in its own right. 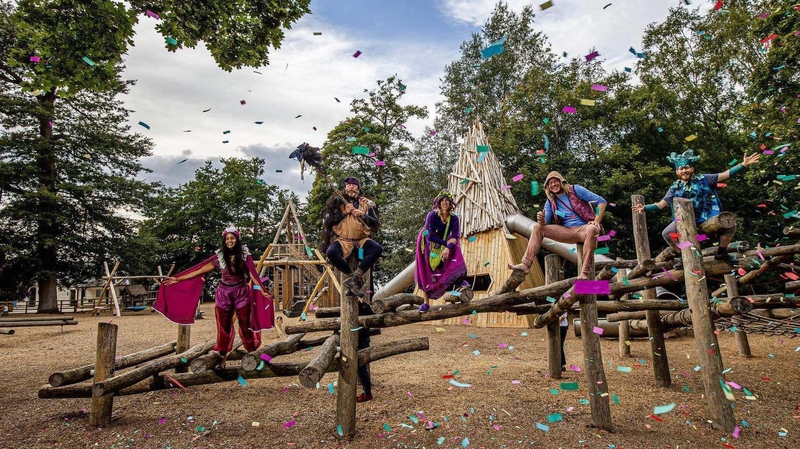 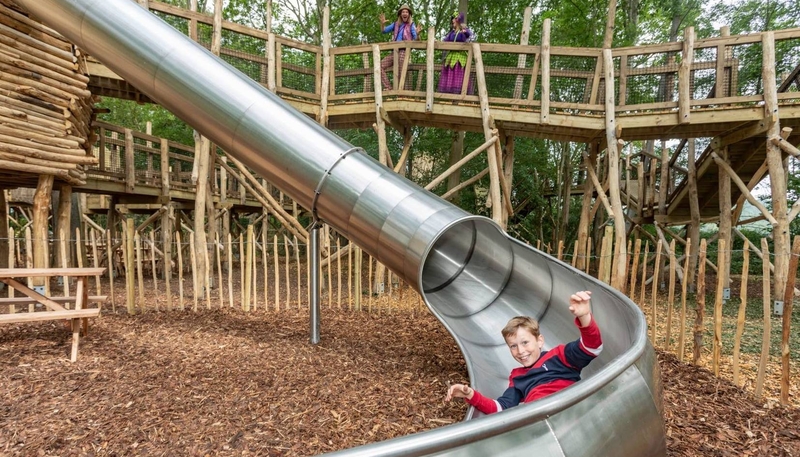 Still the youngsters will forgo all this history for the challenges of Skelf Island, launched a year ago as an adventure playground with an epic story involving the otherworldly Skelves. Expect rope bridges, slides and nets as a vigorous way to learn about the wildlife and ecology of the estate. Subject to any covid-restrictions (check with the website for updates there are sedater child-friendly adventures – boat trips on the lake and treasure hunts, all included in the Gardens ticket (adult £12.95, child £8.50, family £21.50-£34.50). House and Gardens: adult £22, child £12, family £43-£65. 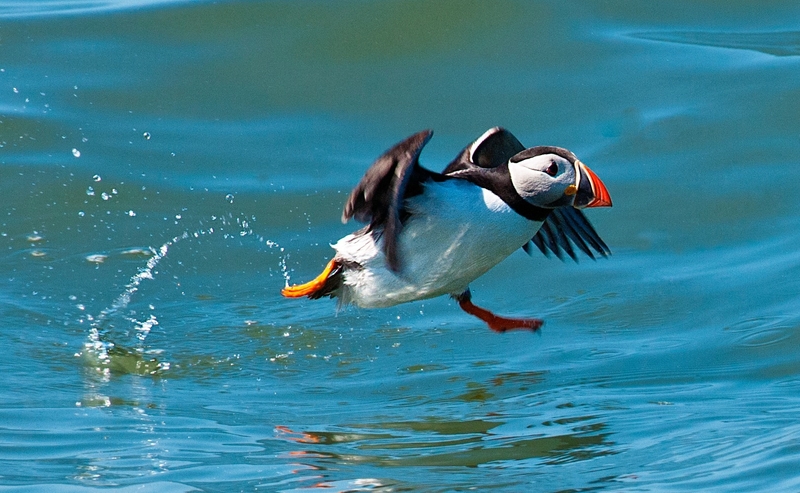 Just over an hour’s drive away from Griffon, this is one of the UK’s great wildlife marvels. More than 200,000 seabirds nest on 400ft cliffs just north of Flamborough Head (and the traditional seaside attraction of Bridlington).

Between March and October you can expect to see gannets, puffins, guillemots, razorbills, fulmars, kittiwakes, herring gulls and shags. Plus farmland birds such as skylarks, tree sparrows, linnets, meadow pipits and reed and corn buntings can be seen. Alas, the ever-popular puffins (above) won’t be back now until next May. They go north early.

We were more than made up with the 28,000 strong colony of gannets on show, mingling in precarious clefts or swooping torpedo like, at up to 100km an hour in search of fresh fish. It’s our largest native seabird with a wingspan up to two metres and can live to be 17. Not until it’s five years old does it gain its striking whiteness with black wingtips. Juveniles have greyish-brown plumage with white spots and are rather cute.

There have been recent sightings of bottle-nosed dolphins, porpoises and seals from those with more powerful binoculars than ours, completing a satisfying family package. There are six viewing points easily accessed with lots of information on site. That’s a well since the fascinating Seabird Centre and shop is restricted at the moment due to the pandemic. Be prepared to queue for toilets. RSPB Members free, adults £5, children £2.50  family tickets £12.50. For more information visit the website.

Bonus? Arguably the UK’s finest chippie is down the road on the edge of Bridlington – 149 Fish and Chips. Those pesky gannets don’t get all the catch. 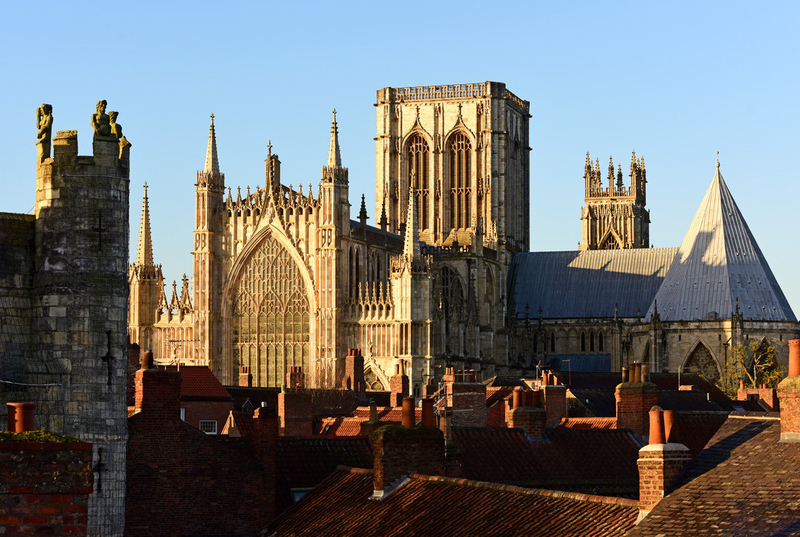 The foreign tourists may have shrunk to a handful this year but that makes it easier to get round draws such as York Minster, the National Railway Museum, the Shambles, Yorvik, the amazing walls and the like. With just a few hours to introduce our granddaughter we pandered to her requirements – Harry Potter-themed shops, ice cream, souvenir-buying.

We found, though, the perfect compromise lunch spot. Market Cat is on Jubbergate, overlooking the Shambles Market. It’ a joint venture between Thornbridge Brewery and York-based beer importers and bar owners Pivovar. The beer ‘cellar’ is on the third storey, and banquettes here have terrific rooftop views of the Minster. We grabbed a corner table on the floor below, floor to ceiling windows making it perfect for people watching and access to the kitchens turning out some awesome sourdough pizzas. Over 20 beers are on tap, too, from the Thornbridge range to classic Czech rarities at good prices (alas, no Badger Ales!). Couldn’t really take advantage with a child and a car in our care.

We had used the Askham Bar Park & Ride, on the Leeds side of the city near the racecourse and a short ride in. For a full range of current places open and socially distanced activities go to the Visit York website.

Griffon Forest, near York, offers special short break and holiday packages throughout the year. Best prices are always available via its website or by ‘phoning during working hours. Telephone 01904 468787, email enquiries@griffonforest.co.uk or visit www.griffonforest.co.uk for more information, online booking and other special offers.