These two ITR dishes are hundreds of years old

Because good grub never gets old

The busy streets of India’s main cities have been teeming with amazing street food stalls for centuries. Many sprouted up to feed the thousands of local workers who needed something quick, cheap, healthy and filling to get them through the day. And we’re not talking meal deals here. We mean slow-cooked, flavour-filled curries and delicious freshly made breads and pancakes to eat with them. All incorporate fresh vegetables along with pulses, and sometimes even meat, all bound in a thick ‘gravy’ made from aromatic herbs and freshly ground spice blends.

How lucky for us then that this is exactly the sort of authentic food Indian Tiffin Room specialise in. Thanks to their team of expert chefs, Manchester can now experience some of the various regional dishes popular in particular parts of India; dosa pancakes, a thali selection, an array of chaats, or savoury snacks, charcoal grilled kebabs and even Indo-Chinese dishes representing a culinary joining of cultures thanks to the spice trail.

What’s more, each of the dishes has a story. Here is a little background on two of Indian Tiffin Room’s most popular dishes.

Simply put, this is a fast food dish of thick, fragrant vegetable curry served with a soft white roll. It is thought to be the most popular street food dish found on the streets of Mumbai and Hyderabad and is the result of a mixture of several cultures over the decades.

It is thought to have originated in the Irani Restaurants of Mumbai around the era of the British Empire and then spread in popularity. The hundreds of factory workers, most of who were vegetarian, needed something hearty and filling at lunchtime, so cooks would mash vegetables in curried stock and serve it with a bread loaf. Due to India’s heavy Portuguese influence (even chillies originally came from Portugal) they mostly used pao, but now any soft white bread bun will do.

Pav Bhaji is now available at Indian Tiffin Room as part of their street food starter and grazing menu. 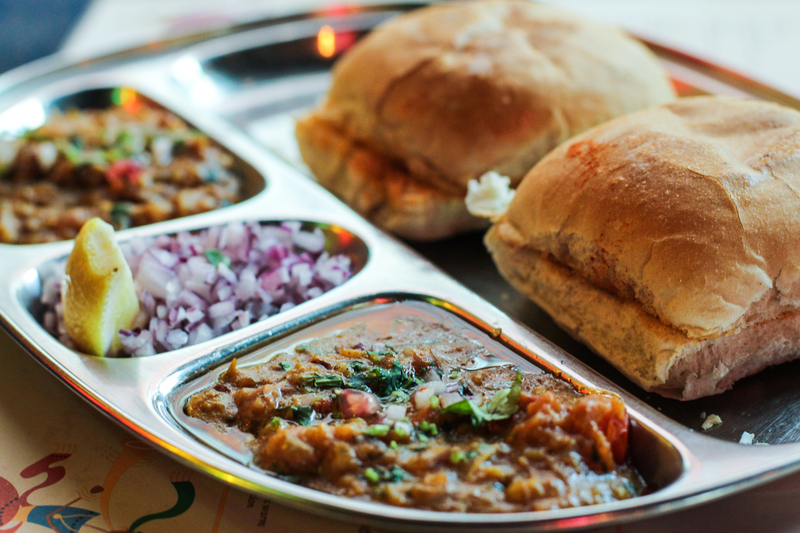 Keema translates as minced meat and originates from the Turkish word ‘kiyma. It is a typical street food dish of Nawabi cuisine, in northern India, and can be traced back as far as the seventeenth century. It’s a popular dish everywhere nowadays, but no-one makes it quite like Indian Tiffin Room, who use goat meat to impart a subtly unique flavour.

Theirs starts with a base of chopped onions and juicy tomatoes, followed by a blend of ground spices and mince, garnished with lemon juice and fresh pomegranate seeds. Just scoop it all up with the delicious squashy bun.

Click here to learn more about The Indian Tiffin Rooms