The women who made Manchester

International Women's Day makes it worth contemplating Manchester’s history of strong women and not just those who contributed directly to the gaining of suffrage in 1918.

As with all these things, of course, this exercise is fundamentally unfair. Only those who made a name for themselves are included and the serried ranks of hundreds of thousands of others who worked, raised families, raised issues and led, on the incomplete road to equality, are left to the cruel anonymity of time.

Manchester enters history as feminine, in name at least. The future city was first named by the Romans as Mamucium, or ‘breast shaped hill,’ from the swell of the hill at the confluence of the Rivers Irwell and Medlock. Sometime in the early Middle Ages ‘mam’ became ‘man.'

While we’re here let’s talk Manchester bees. This symbol of hard work was adopted in the first half of the nineteenth century by the city and seven of them are present on the court of arms. The bees are worker bees and are, thus, all female bees. Boy bees are drones, they get the Queen pregnant and then die.

Perhaps the first female figure of historical note in Manchester is a woman who claimed divinity. Ann Lee, born close to where the National Football Museum now stands, became ‘Ann the Word,’ the leader of a Christian sect called the Shakers. They believed her to be the female incarnation of Christ – largely because she’d told them she was. Following another revelation Ann and her followers emigrated to upstate New York in 1774. A small community of Shakers live on in Maine. Fame briefly visited the sect after World War II when modernist designers doted on their simple furniture.

At the beginning of the 1700s, two matriarchs, Lady Ann Bland and Madame Drake, were opinion leaders. Lady Ann, a widow, was the patroness of St Ann’s Church – the choice of dedication was a clear reminder of her generosity. She also supported the ousting of the Stuart Kings by William of Orange whilst Madame Drake adored the Stuarts. The pair competed in every area of town life. Ann Bland, the first recorded Mancunian slave to fashion, would wear orange to irritate Madame Drake and the latter donned plaid to annoy Ann Bland. Madame Drake was a big woman in every way, it was said that she ‘could not reconcile herself to tea or coffee and when she visited her friends of an afternoon used to be indulged with a beer and a pipe.’

Impressive though these two were, they couldn’t match the indefatigable Elizabeth Raffald for energy. Raffald ran coffee houses, pubs, wrote the first Manchester Directory and in 1769 published The Experienced English Housekeeper, which ran to 13 editions and was pirated 21 times. It was the first mass popular cookbook in English with full recipes, preparation suggestions and menu recommendations. That’s not all. In the 18 years she spent in Manchester after service at Arley Hall, near Warrington, it was said she was pregnant full-term sixteen times. Her husband by the way was a seedsman and sold horticultural seeds on the marketplace. Given his fecundity he sort of had to be.

The nineteenth century sees activism in politics become a feminine theme for Manc women. In 1819 the Manchester Female Reform Group (MFRG) was formed and led by Mary Fildes. Later that year there was a mass public meeting in support of extending the vote to all men (not women) irrespective of property and position which the MFRG supported. Broken up by the authorities, the meeting became known as the Peterloo Massacre. Fildes was one of the main speakers and was wounded by a sabre cut – there would be sixteen fatalities overall. Subsequently she promoted birth control and, thus, in this patriarchal world, was accused of disseminating pornography.

48 years after Peterloo, Mancunian Lydia Becker was a leading light in the national campaign for the vote, but this time for women as well. In 1887 she became the president of the National Union of Women's Suffrage Societies. Whilst her name has been largely forgotten, that of the Pankhursts is familiar to anybody interested in politics. 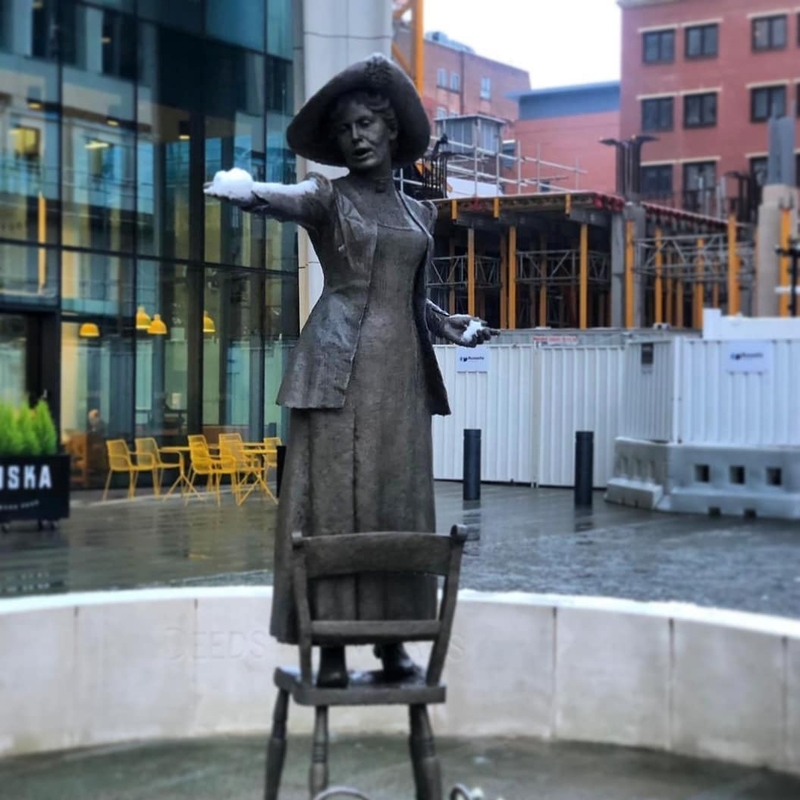 Emmeline Pankhurst’s parents had both held radical political beliefs and their daughter was a chip off the old block. Frustrated with lack of progress in the constitutional struggle for the women’s vote, she formed the Women’s Social and Political Union in 1903 at her Manchester home on Nelson Street. When the Union became militant, the Suffragettes were born.

Amongst other famous Suffragettes from the area were Emmeline’s children Christabel and Sylvia Pankhurst, and Annie Kenney. Emmeline, represented by a fine artwork in the Town Hall Extension in Manchester, is also marked by a statue in St Peter’s Square. The first statue of a real woman (not a symbolic muse of something or other) in the city centre since Queen Victoria’s weird Piccadilly Gardens monument was erected in 1905.

We’ve got ahead of ourselves. Way before Emmeline Pankhurst, a female author achieved fame. Elizabeth Gaskell was one of the great nineteenth century British novelists and lived for many years on Plymouth Grove, not far from the Suffragettes subsequent home.

Novels in the 1840s such as Mary Barton, North and South and Ruth looked at the new industrial age from both a working and middle class viewpoint. They were often deemed offensive because they dealt with subject matters not thought suitable for respectable readers. Thus, Gaskell's Ruth was about the fate of a ‘fallen woman.' Some fathers burned it in case their innocent daughters should be tainted by the story. Other female Mancunian novelists were less controversial such as Francis Hodgson Burnett, the author of The Secret Garden.

'...and she, having no male relations at hand to assist her, had horsewhipped (Wishart) for it'

Aside from all the important names, there’s something delicious about one Ellen Edwards who, in 1872, publicly horse-whipped a shop assistant called Wishart. As a court report reads he ‘had circulated a scandalous and unfounded report about her, and she, having no male relations at hand to assist her, had horsewhipped (Wishart) for it.’

Bringing it up-to-date and the big problem

Into the twentieth century and many of Greater Manchester’s feminine movers and shakers (not of the Ann Lee variety of course) become more familiar. In literature we’ve had Richmal Crompton, the Just William novelist; Shelagh Delaney, playwright of A Taste of Honey; Maisie Mosco, chronicler of Manchester’s Jewish community; Dodie Smith, author of 101 Dalmatians and current writers such as Emma Jane Unsworth and Rosie Garland. Both Jeanette Winterson and Hilary Mantel are women of the Greater Manchester borderlands. Adopted Manc, Carol Ann Duffy is the current Poet Laureate.

...Manchester became the first city in the UK to have a majority of female councillors

Appropriately, given past history, the contribution to the nation’s politics in the twentieth and twenty-first centuries has remained significant. The relatively recent Government has given office to three local women: Ruth Kelly was an Education Minister (she was preceded in this post by Mancunians Ellen Wilkinson in 1945 and Estelle Morris in 2001); Hazel Blears was the Minister of State at the Home Office in charge of Policing, and Beverley Hughes was at the Home Office looking after Children’s issues. These women were all figures in the government of Tony Blair.

Shena Simon and Dame Kathleen Ollerenshaw are earlier notables in diverse fields as well as politics. Amina Lone has achieved national profile heading up the think tank, Social Action and Research Foundation. It’s satisfying that a couple of local elections ago Manchester became the first city in the UK to have a majority of female councillors.

Meanwhile, Rachel Haugh has her name as part of the partnership behind one of the city’s most successful architectural practices, SimpsonHaugh & Partners; Sheona Southern heads up Marketing Manchester; Dame Nancy Rothwell is vice-chancellor of the University of Manchester, and Joanne Roney is the city’s chief executive.

Presently Greater Manchester female MPs have a big presence in the shadow cabinet. Lisa Nandy is the MP for Wigan and an ex-Parrs Wood High School student. She's the shadow foreign secretary, while Kate Green, Stretford and Urmston, is shadow education secretary and Angela Rayner is the Deputy Leader of the Labour Party.

"...you have to be there all the time and see that they do not snow you under"

Talking of contemporary women in this way (and no doubt missing many out) troubles me. It troubles me, as the historian-long-view-go-to-person of Manchester Confidential, that in 2021 I’m even mentioning these women in this way. That women are leaders in various fields in Manchester and Greater Manchester in 2020 should be a given. It should be normal, it shouldn’t be worthy of comment.

Emmeline Pankhurst’s century-old two babies principle still rings true: ‘You have two babies very hungry and wanting to be fed. One baby is a patient baby, and waits indefinitely until its mother is ready to feed it. The other baby is an impatient baby and cries lustily, screams and kicks and makes everybody unpleasant until it is fed. Well, we know perfectly well which baby is attended to first. That is the whole history of politics. You have to make more noise than anybody else, you have to make yourself more obtrusive than anybody else, you have to fill all the papers more than anybody else, in fact you have to be there all the time and see that they do not snow you under.’