Nigel Haworth is one of the best chefs in Britain you’ve probably never heard of. Unless you’re a mega foodie, over the age of 65 or live in Happy Valley, aka that very well-to-do area around Clitheroe in deepest darkest Lancashire. It’s a bit like Alderley Edge before the footballers moved in and I moved out.

It was DFF. That’s a technical term which stands for Dead Fucking Fit.

Haworth went to Rossendale Catering College, then got serious gigs at Gleneagles in its heyday, The Ritz (impresses Gordo that one) and in Switzerland. He took over as head chef at Northcote Manor in the mid-eighties winning The Egon Ronay (think Gordo without the personality) chef of the year award and a Michelin star in the mid-nineties. He stepped back from the kitchen at Northcote a few years ago but remains an ambassador.

Northcote still retains its star under the remarkable Lisa Goodwin-Allen. Haworth, in the meantime, decided, pre-covid, to take back the shuttered Three Fishes and refurbish the whole building along with the food offering to reflect his life journey in cooking with an offering of quality for the post-covid minimalist movement. 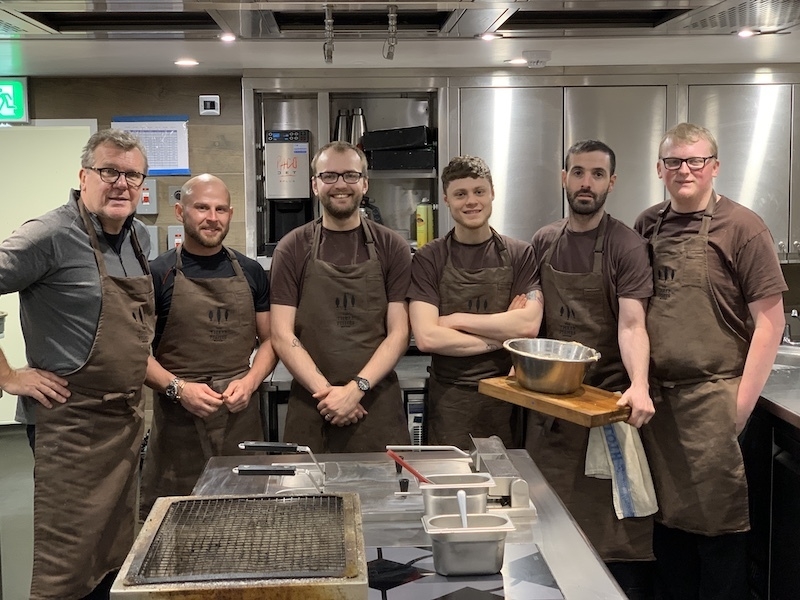 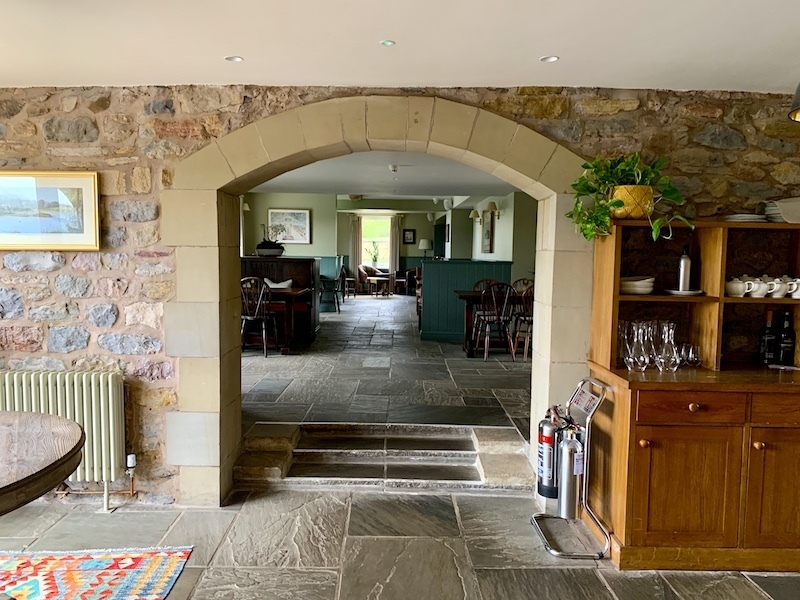 Matisse did the same. Has Nigel been able to produce a Chappelle du Rosaire de Vence, or just another pub with good pie and chips? Has he taken the easy road to supplement his pension, or is he taking a risk?

I’ve been twice recently. The first time was on a professional comp; I took that as a great compliment, Nigel isn’t known for being profligate with his dosh. I did leave a cash tip, equivalent to the cost of the set menu with the remarkable Jessica Moretti, the consummate professional general manager. The second time I arrived on a Saturday lunch booked under an assumed name. It didn’t seem to faze Jessica, to be fair.

The building, I will hazard a guess because Moretti and Haworth aren’t good at answering phones, has always been an inn of sorts; it sits on the main road outside of Whalley. A gleaming, white-washed affair in front of several acres where Haworth and his fabulous wife Kath, an interior designer of note, are turning the fields at the top into a huge kitchen garden. On the first visit it had me scratching my chin, but on the second had me thinking that this whole affair, with plans on the back patio for grills to rival any in Galicia, was going to make Fishes a true destination restaurant.

Walking into the bar, you're hit with the smell of log fires and a bar top of solid polished oak with a display of class.

A few lounge chairs that would be perfect for a kip after lunch. And, that true test of quality, smelly (in the right way) toilets that you don’t want to come out of, with cubicle doors that go, quietly, thunk.

Front of house isn’t letting Chef down while he’s on the tools. Service is as well polished as that bar top.

I ordered a half bottle of Champagne (Louis Barthélémy, Brut Améthyste £45) to pace myself through the meal. Lightly toasted brioche with an understated citrus kick. A good example of a serious champagne without the hype. Kept its tickle all the way through.

I’ve always liked a Champagne house with a story; this one founded by Princess Baudry, who fled the mob in Moscow in 1918 with her neck intact and jewels stuffed down her knickers; she turned them to good use (the jewels, not the knickers) setting up the champagne house Baudry Lebrun & Cie. My kinda girl.

Glorious bread, as well as a cheesy scone (slightly better warmed, possibly?) with great un-mucked about butter (£5.50). Nigel has found himself a good pastry chef. A little taster of nettle soup came with the bread, I would happily have taken a bowl full. My notes read “fresh as cotton sheets just off a clothesline on a blustery day”. But it must be noted that I can be a right wanker at times.

A plate of six bay oysters (£18) showed the maturity that Haworth has reached in his journey. Superb quality served shucked in the correct fashion; no shards, connecting muscle cut clean, shallots in vinegar and Tabasco. No mid-range chef nonsense. Like Bowie and Ronson producing Lou Reed, Haworth knows when to stand back and let the talent shine.

That can only be achieved by a chef comfortable in their own skin. Yorkshire asparagus (£12.50) were napped in pesto, sat on a Panzanella "mayo" and topped with a cloud of "house shoots". A masterpiece: even I could "go veggie" with food like this.

Scallops in tempura (£23) were a slight disappointment; the batter was too thick and needed a hotter oil. The scallops themselves were beautiful, whilst the tartare sauce, a lifelong love affair for me, was outstanding. A local chippy offers "home-made tartar sauce" for an extra £1. They’re lying bastards and if they don’t desist, I’m going to burn the place down. You know who you are.

Wild Cornish Sea Bass (£45). The fisherman who landed this bugger must have been a customer of Flannery’s Plant Hire. This was a fillet off a big fish that only a chef with grey hairs and a solid black book of suppliers could have sourced. Dealt with beautifully, kept moist but crunchy skin with a couple of spears from that morning’s asparagus delivery laid across the affair. Served with a pot of hollandaise sauce along with a small pile of Cornish new potatoes; all told another triumph of a dish.

Finally (well nearly, I nabbed an Eccles cake on the way out - ooooh) a lemon meringue pie with yuzu sorbet and buttermilk (£12). It was DFF. That’s a technical term which stands for Dead Fucking Fit.

The Three Fishes for me is a masterwork and a statement on how exceptional dining post-COVID should evolve. The best ingredients of the season are cooked with hard-earned knowledge of how to bring the absolute best out of them. Once that kitchen garden is in its second year it’s going to be lush. English food at the top of its game.

There is a good wine list, with fair markups. The place is not cheap. but is great value. Priced in-between a very good gastro pub and a one-star Michelin, you can regulate your spend by taking advantage of the manageable set menus (£39 for four courses, £50 for five) or just taking a couple of courses. It’s a relaxed affair. Warm, cosy, and welcoming. Hospitality at its very best. 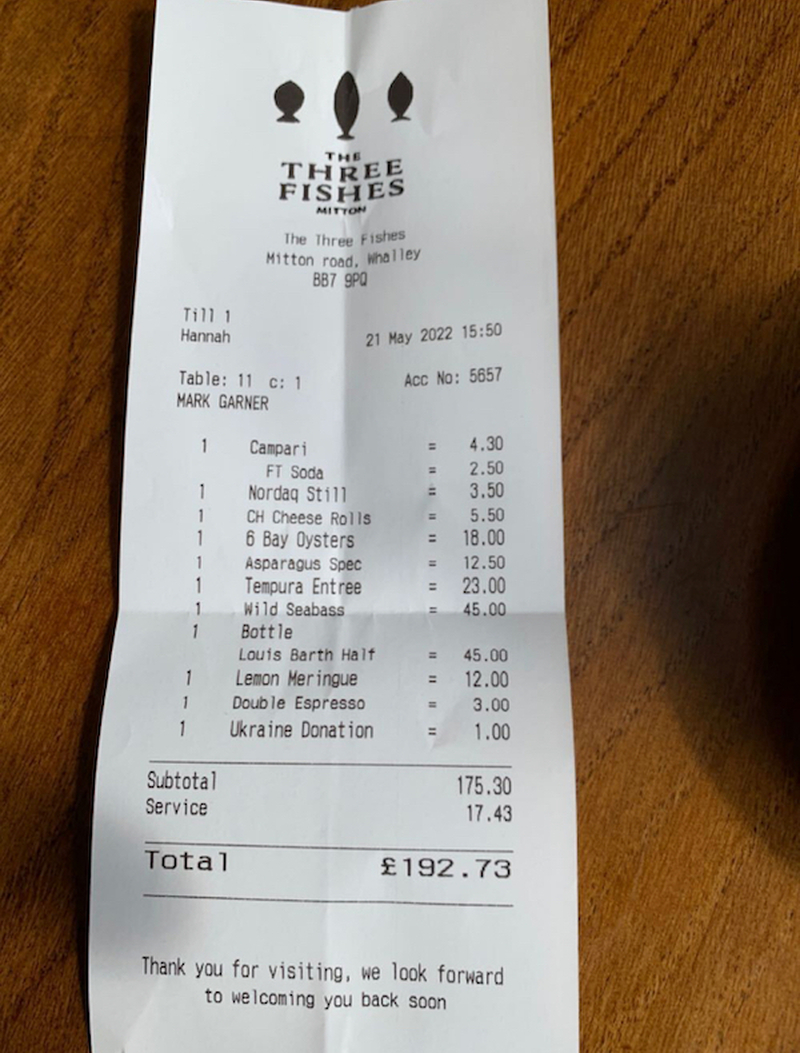