To some people, menus are like gorgeous, condensed poems to be read and savoured as artworks in their own right. To others, they are more confusing than a set of Government Guidelines and definitely on the TL;DR list.

At The Moor in Heaton Moor, chef James Hulme is clearly the Seamus Heaney of the blackboard. Doesn’t “new season tomatoes, fresh cheese, yellow peach” transport you to a chequered picnic blanket on a late summer’s day?

Not everyone is so enraptured. The couple on the table next to me read through the menu and decided to leave without ordering anything. Nosying at other tables is a terrible habit/important research, depending on how you look at it, and it seemed that one of the pair was put off by the seeming complexity of the menu.

They needn't have worried so much. While lovingly finessed, the food at The Moor is described as “alternative British food guided by flavour” which means classic cooking with the emphasis on seasonal, local ingredients. Fans of meat and two veg (or in this case four or five veg) will not be disappointed. Likewise, foodie nerds will be delighted with the attention to detail and sustainable ethos.

The menu is £33 for two courses or £37 for three, with a few bolt-ons. One such is The Isle of Mersea oysters with pickled cucumbers (£3 each).

I’m convinced that people who love oysters and people who loathe oysters are having exactly the same experience. Both parties taste a mucoid salinity as it slides on down. To the oyster lover, this is a wildly invigorating experience that seems to shoot wellbeing through their veins quicker than an intravenous vitamin drip, making them feel instantly more alive. For non-fans, it’s just a blob of salty snot on a shell. Well, if you’re a fan you must start your meal with a couple of these beauties.

For once, starters are not the most memorable part of the meal. The grilled violet artichokes continued my love affair with original edible flowers and are pleasantly laced with paper-thin discs of new potatoes and last season's cobnuts. The beef tartare is richer, dressed with whipped bone marrow and egg yolk and studded with tiny nasturtium leaves. Both are well-executed.

The Moor has had some publicity for its rib of beef, which is very tempting. The meat comes from retired dairy cows, who, now their hard graft is done, live happy lives on a farm in Buxton. Or at least used to, until they ended up on the plate, which is slightly less heartwarming. One does wonder what the life of a retired cow consists of. Maybe they take up that hobby they always fancied – rollerblading or pilates perhaps. Anyway, the relaxed lifestyle of these boomer cows results in meat that is both matured and marbled in fat.

The only downside is that you have to order the rib of beef for two people, which isn’t really in the spirit of reviewing, so I opted for the mangalitza pork instead. Like the retired dairy cows - and perhaps taking inspiration from the original luxury meat, wagyu - mangalitza come from a slow-growing rare breed of pig that gets very marbled in fat, producing delicious meat.

Waygu cows are famous for getting beer massages and generally living the life of Riley, and while it's not quite that luxe on the Welsh farm that breeds mangalitza pigs, they have quite a jolly time before the inevitable happens. This seemed close enough to the idea of the retired dairy cow and came with intriguing accompaniments of smoked apple and Tokyo turnip.

In fact, it was the humble carrot that captured my attention, while the smoked apple provided a jammy, autumnal lift.

Venison, compared to wagyu and mangalitza, is the Joe Wicks of the livestock world. No beer massages to be seen here. Instead, deer spend their days manically springing up and down like mystical dryads on pogo sticks, only to break for a nibble on some leaves and shoots. To be fair, they also do some rutting, but I certainly wouldn’t want to imply shagging and fighting are an integral part of the Body Coach 90-Day Plan.

This healthy lifestyle means that venison meat is usually leaner and more muscly than that of its Homer Simpson-esque cousins, giving it a reputation of tending towards dryness. This can be sidestepped with careful sourcing but even given its posh Cheshire upbringing, I was blown away by The Moor’s Tatton Park venison, served with beetroot, kohlrabi and Borretane onion. The seared flesh was so rosily tender, yet so divinely dark and meaty in taste that it eclipsed the pork in a second.

The food was flying high and after forgoing the beef, we decided to treat ourselves to the apple tarte tatin, which again had to be shared between two. When it arrived, all humps of baked apple on a crisp pastry shell, it was perfectly lovely but not as beautiful as the previous dishes. I know tatins are meant to be a bit rustic but the clotted cream ice cream arrived on the side in a bowl, which seemed like an afterthought and with only two scoops for the two of us. It wasn't clear why it had to be a shared dish either. Whilst I enjoyed it, it didn't seem quite as thoughtful or refined as anything else on the menu.

The Moor was conceived by James Hulme, who has previously cooked at Quaglino's and 20 Stories, both from D&D. This seems to be a much more soulful enterprise. The term "ingredient-driven" is already fast turning into a cliche but really the love of ingredients is what shines through. To the couple at the table next to me, I'm sorry to say – you really missed out. 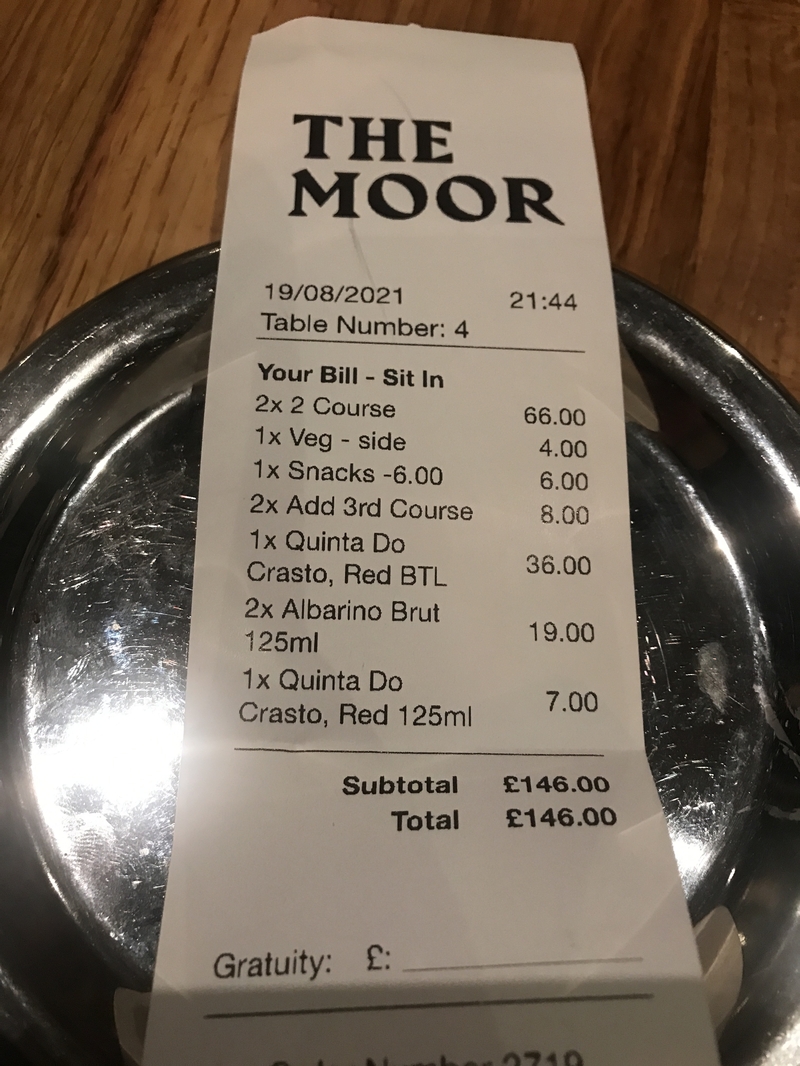