After one of the most confusing, interesting, disappointing, inspiring and entertaining meals of my reviewing career...

That is perfect for Ernst van Zyl's food. Half way through the review meal I wanted to read Edgar Allen Poe's the Masque of the Red Death, or Mary Shelley's Frankenstein. I wanted to watch Guillermo del Toro's Pan's Labyrinth.

This was all down to the food because Zyl's Gothic is housed in the most unlikely of locations.

The Lord Clyde appears to have grown out of the ground it so fits the landscape. It sits in Kerridge in the finest part of Cheshire, where the pancake flat plain holds promise of Pennine high ground. From outside, if you ignore the cars, the mind's eye imagines yokels with straws in their mouths playing fiddles in a Thomas Hardy novel moved north.

How on earth has The Lord Clyde avoided being bought by a canny stockbroker type, closed, and converted into flats over-priced by 20%?

Inside it's intimate with hardly enough room to swing a grinning Cheshire cat. But it's very sweet, a lovely place to sit and drink the decent ales or swill the wines on the excellent list. An outdoor area doubles the space available for diners. 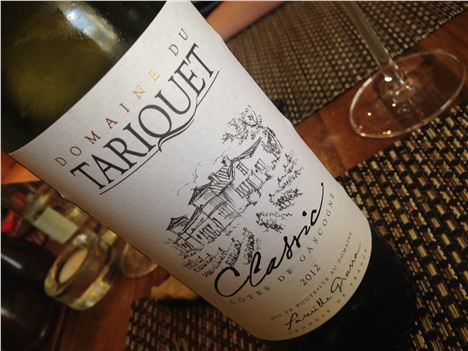 A summer glass of this Tariquet was perfect

You can tell this is a labour of love for Zyl and partner Sarah Richmond, you can imagine them getting stuck into the decorating before they re-opened the pub last year. In many ways it's exactly what you want a chef proprietor place to look and feel like.

Gothic you see, a new genre.

Zyl gained two AA Rosettes at his last place at Etrop Grange close to Manchester Airport. His not-on-the-bill selection of pre-starter nibbles (I hate saying amuse bouche, it's such an up-its-own-arse foodie term) was way beyond that. This was Michelin quality stuff (I hate saying that, because Michelin is so up-its-own-arse too).

There was a beetroot thing, a lamb thing, a brioche thing, an anchovy thing and a thing that wasn't very nice - a clash of salmon and dill. These were arranged on an alarming gravestone of marble. 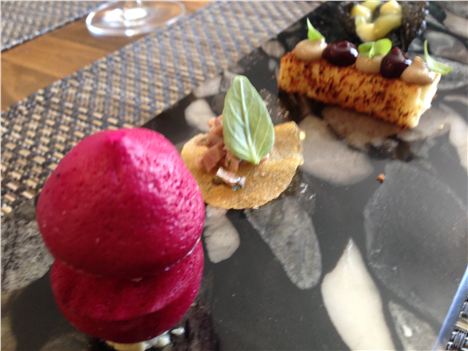 The first four items, particularly the beetroot macaroon, the brioche and the anchovy crisp were utterly gorgeous. 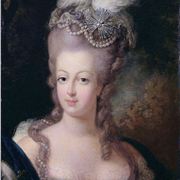 'Oh But Mr Zyl, You Spoil Us'Complex, inspired, gloriously decadent - you could imagine Marie Antoinette swooning with this food in Petit Trianon as the mob rushed the gates outside.

Rugged sourdough bread, also not included in the price, came in a sack with butter and dripping. It was the rustic opposite of the sophistication of the pre-starters. Again, fabulous. Dripping. Stop it baby.

The smoked butter really didn't require smoking though, just give it us salted Ernst. 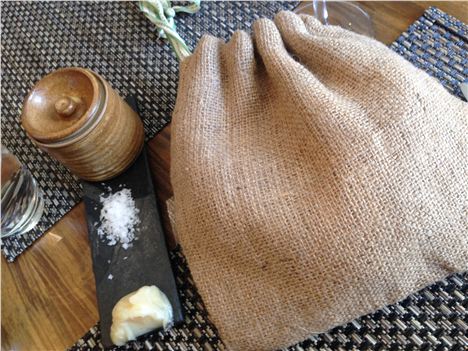 It was during the starters that clouds began to gather over my sunny outlook. My Jacob's Ladder (£7), that punchy meat from between beef cattle ribs was done a range of ways from raw to stringy and looked fascinating if somewhat reptilian. The shallot and feta worked with this but a sweetness that must have been the blueberry listed on the menu irritated before the end. 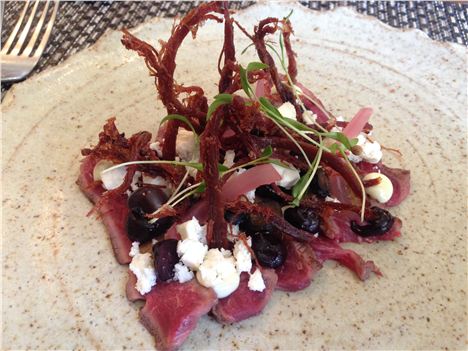 Jacob's Ladder at The Lord Clyde

The scallop (£11) with pigs head, pineapple and courgette was another Zyl tour-de-force. This was better, the flavours sympathetic to each other, the presentation a break from the bloody massacre appearance of the Jacob's Ladder. Fish and pig were wonderful, the strange play on mushy peas less good.

As the picture shows below there are so many Zyl elements on the plate, every plate, 400 words per dish wouldn't suffice to describe every detail. 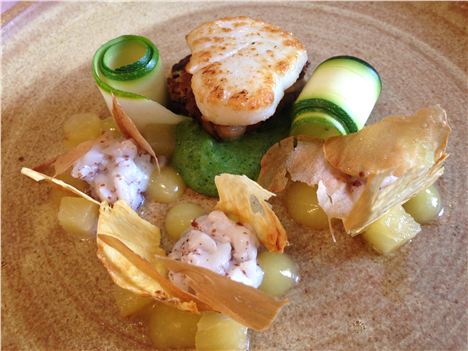 The pork fillets (£15) on my main were spectacular, revealing how good humble pork can be if treated with skill and care. I could eat them over and over again. A pig's ear fried, I think, and covered in exploded barley or popcorn or by some other species of culinary alchemy was a bit of genius. Bang on. Root veg good too.

But the clams that came with the pork should have provided definition for the pork and should have lifted the dish. Instead they tasted of potted clams, mawkishly vinegary. As a result they howled at the other elements like a mad dog at a speeding car.

A glass of Monte Aragon Rioja with this was a treat. 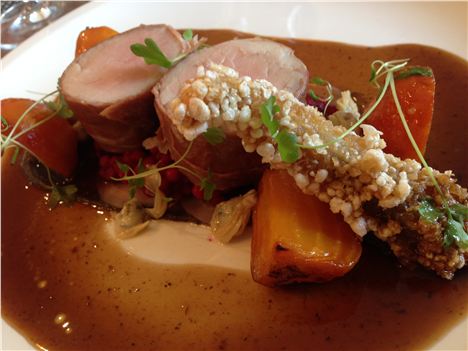 Pork wins, pig's ear too, the clams were just a pig's ear

Onto the lamb and broccoli (£18), at which point the feeling round the table was that the mains were looking decidedly wintery for a summer's day.

The lamb was excellent and the spiced sausage was apparently "astonishingly good", turnips thumbs up, ditto the broccoli. Yet, damn it all, the vinegary (again) pickled root veg thing looking like very small blanched intestines were simply too much. A push-to-the-side of the plate element. 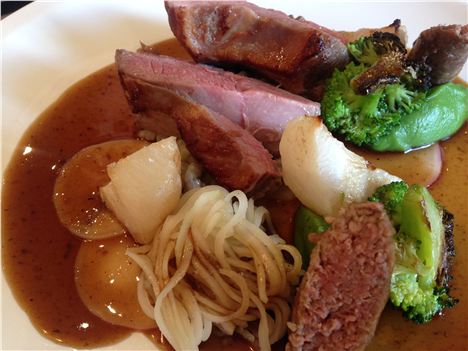 A dessert of lemon and goats cheese with meringue and blackberry (£7.50) was fabulous. I loved the combination but for those weirdoes who find goats cheese challenging, this was very goaty. The meringue was excellent.

The cheese board (£9) with three cheeses featured a fine Kidderton Ash but also a brie that was too young. 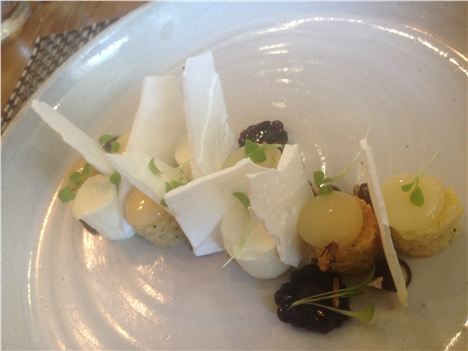 While we were there Zyl sent out - to other customers - some of the best looking sandwiches I've ever seen. These were big, chunky, generous and very straight-forward looking beasts. The egg mayo was a picture and at £6 a steal. Bear these in mind on any visit.

And visit you should if you're interested in food.

The Lord Clyde is a real north western experience with its Modern Gothic food. I emphasise 'experience'.

Hilariously, one of the unnattributed quotes on the website sings a little song about 'unpretentious cooking'.

This is a staggering level of self-deception.

And that's the problem.

Ernst van Zyl is clearly a creative genius. But he needs direction, someone he respects who can tell him how to focus his inspiration, rationalise it. He needs an editor.

Just because a thing can be done, doesn't mean it has to be done. The smoked butter early in the meal showed this. Clearly it required huge technical know-how, but the result was - to keep the Gothic theme going - pure Frankenstein. Similarly he needs a person who will edit out the clams from the pork dish. The result would be better and at the entirely reasonable price of £15 nobody would complain for a second. 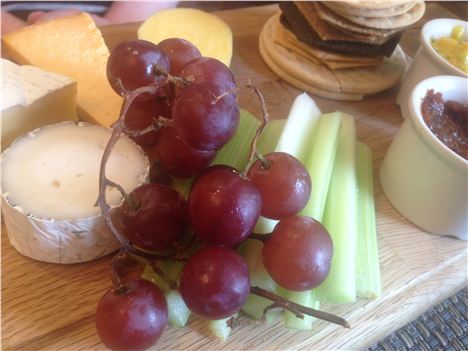 After one of the most confusing, interesting, disappointing, inspiring and entertaining meals of my reviewing career I say this with confidence.

If Ernst van Zyl can find an editor he may very quickly become the nationally renowned star he clearly yearns to be. Then all the foodies will be beating a trail to the door of this tiny labour of love in little Kerridge village. If he doesn't he may find himself lost in the Cheshire wilderness, or stuck up his own arse like a Michelin critic or a blogger over-using the words amuse bouche. And he's far too good for that.

Rating: 16/20
Food: 8.5/10 (mostly for cooking dexterity, see caveats in the article above that make the review impossible to score dish by dish, but I love the man's ambition)
Service: 3.5/5
Ambience: 4/5 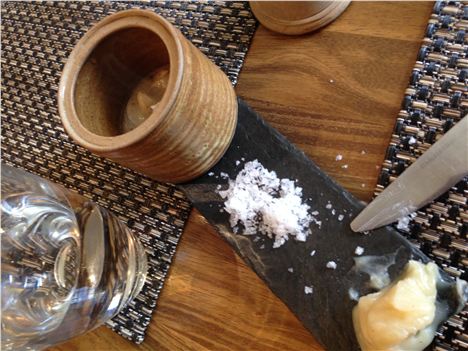 Bread and salt and dripping 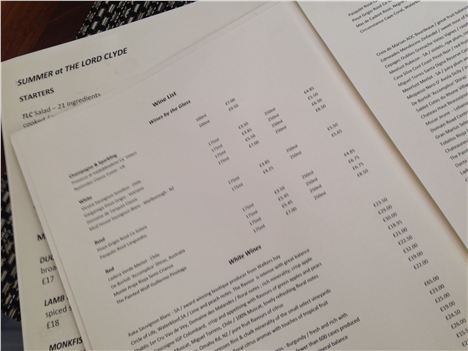 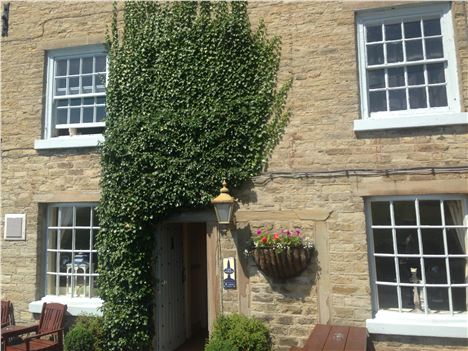