Video - Department of Coffee and Social Affairs opens in Manchester

At Faulkner House, the London-born franchise do coffee and, well… social affairs

“We get that a lot,” laughs Department of Coffee and Social Affairs general manager Yasmin Leaman, “coffee is our thing, but we simply wanted to create a space where people can come in, relax and have a chat.”

The London-based coffee chain has been creating spaces for caffeine and fraternising since it launched its first space in Holborn in 2010. DoCaSA or 'The Department' (as we’re now calling them) are now expanding confidently, with ten branches spread across London plus one in Bristol and another planned over the pond in Chicago.

“It’s likely that we’ll open a second coffee shop in Manchester and another in Leeds,” says Leaman.

Their first Manchester coffee shop is located in a glass-fronted space at Faulkner House, near to Grill on New York Street. They’ve gone for a greyscale, minimalist approach to design, with reclaimed wood tables and fixtures.

Together with expertly crafted artisan coffee, they're selling t-shirts and mugs with slogans such as ‘the flat white rises’ and ‘coffee first, your mundane bullshit later’. A trendy, artisan coffee upstart then.. a concept the city is not unfamiliar with. 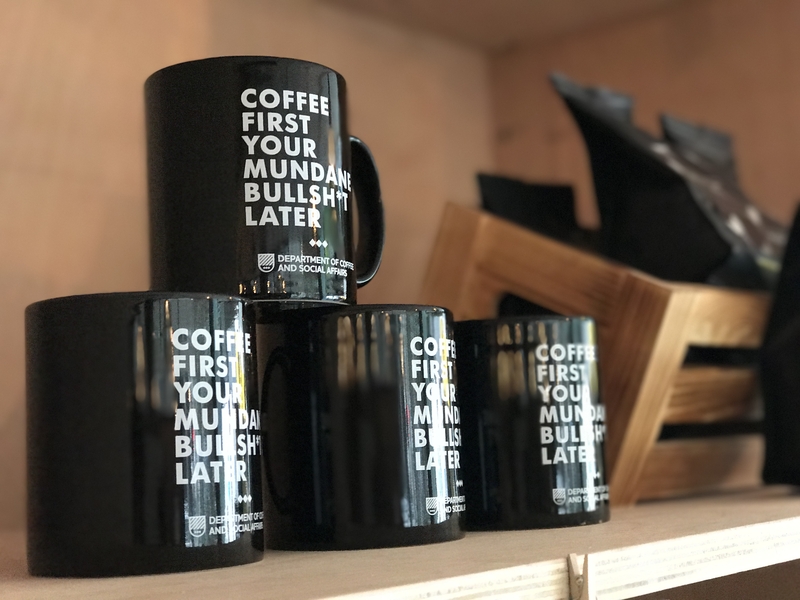 Manchester certainly isn't short of places to get a coffee. So what makes the Department of Coffee and Social Affairs different?

“A lot of coffeeshops use multiple origin beans while we only use single origin. We know exactly where they come from, we know every worker by name and it’s taken five years for us to get to that point,” explains Leaman. “Our beans change every six months. Once they’re gone we can’t get them back because of the temperature and the way they’re grown, so everything’s limited edition.

“The baristas also go through intense training. We time every single shot at 30 seconds, so we’re not messing around,” she adds.

DoCaSA aren't just serious about their own people, and are involved in a number of charities including international clean water charity Pump Aid, and London-based charity Team Up, which provides private GCSE tutoring to disadvantaged children.

They'll also be stocking local produce from the likes of The Ottomen and Trove, though the emphasis will always be on the coffee and making customers feel welcome.

“Other places can do amazing coffee but the baristas can be quite slow and impersonal. We want people to get to know us, chat, mingle – that’s what we’re about.”