My son has declared that his grand ambition is to save up all his pocket money for a trip to Tokyo (so far he has got enough for a tram to Manchester Airport). No doubt this is less to do with savouring the delights of Japanese cuisine and more to do with the fact a Super Mario World is opening there to coincide with the Tokyo Olympics.

Still, I thought that his new-found passion for all things Japanese would be a good excuse to try and steer his palette away from its extreme loyalty to Captain Birdseye.

Tempura, surely a trick dreamed up to fool kids into eating their vegetables

Some parents have little darlings that have been gorging on aubergine and Brie since they started weaning. Despite having keen omnivores for parents, my little boy has been unwavering in his love of conventionality in all things food-related - so far it’s been fish-fingers and baked beans all the way for this little traditionalist. Now was my chance to broaden his culinary horizons a little.

We decided on Sushi Kimchi in Altrincham. Many of you may already know this as the Oxford Road Cafe, a well-established favourite that does a cracking range of breakfasts. When darkness falls (or more precisely, at 5.30pm) this bustling café transforms into a Japanese meets Korean restaurant. It was previously known as the rather raunchy sounding Oriental Fire, and before that a sports bar and a curry house. Now it’s settled into it’s groove, slightly out of the main foodie hub that clusters around Altrincham market, and from eavesdropping on the other customers, its audience is mainly returning locals who know the menu inside out.

Though the menu is fairly equally spilt between Korean and Japanese, we mainly went for Japanese this time as the subtle flavours are more suited to cautious palates – Korean food on the whole tends to be bolder and spicier (though watch out for that wasabi).

The chicken karage (£5.95) was extremely popular with the smallest member of our party – insisting on calling them Japanese chicken nuggets (sigh), which is actually a pretty accurate description. True this chicken is marinated in soy and coated in potato starch but I like that this illustrates that, contrary to the pervasive myth that Japanese food is po-faced, expensive and healthy, there is plenty of less-than-pure fun snacks.

Another example is tempura, surely a trick dreamed up to fool kids into eating their vegetables by coating them clouds of crispy, deep-fried deliciousness. Our yasai tempura (£5.95, yasai just means mixed veg, other versions are available) was a hit, especially when seized with the bright red child-friendly chopsticks. These overgrown plastic tweezers give it an air of the old-school game Operation, but instead of plucking out a heart or pair of lungs, you are grabbing chunks or sweet potato or broccoli, which to my mind is much less disturbing.

The pork gyoza (£3.95) were fine but had been overly fried - not that I mind a bit of extra crispness - and of course edamame (£2.95) was a hit with the youngest, once I’d shown him how to pop the beans out of their salty green jackets.

For a main we decided to swerve into the Korean side of the menu with a classic bibimbap. Essentially a mixed rice bowl usually served with an egg (can be raw or fried), this is the Korean comfort food bar none. I choose the seafood version (£12.95, vegetable and meat versions available), served in a sizzlingly hot stone bowl which crisp up the bottom layer of rice into sticky, crunchy scrapings.  It comes with a little bowl of hot sauce so you can control the spice levels yourself.

In contrast, the steak teriyaki noodle stir fry was a bit bland, in fact it reminded of a (admittedly better executed) version of the sort of thing I might have cooked as a student.

The dessert offering was a bit limited (banana tempura was the only thing stuck out) though you can also choose from a few cakes that presumably had survived the daytime crowd. The smallest one decided to reassert his Britishness by opting for chocolate shortbread. I loved that the waitress, aware that children have an instinctive understanding the sense of ceremony that comes with eating in a restaurant, plus of course a deep appreciation of ice-cream, made sure that the shortbread came with the trimmings usually reserved for more ‘puddingy’ desert items. It was a really thoughtful touch.

Funnily enough, the two things we didn’t try from the menu were the eponymous dishes of sushi and kimchi, which is an oversight to be corrected next time. I’d like to explore the Korean side of the menu further, as while what we had was in the main well done, it wasn’t wildly exciting either. Solid but not too challenging, with lovely service that made it a perfect choice for a family dinner, and reasonable enough that we haven’t dented the travel funds too much either. 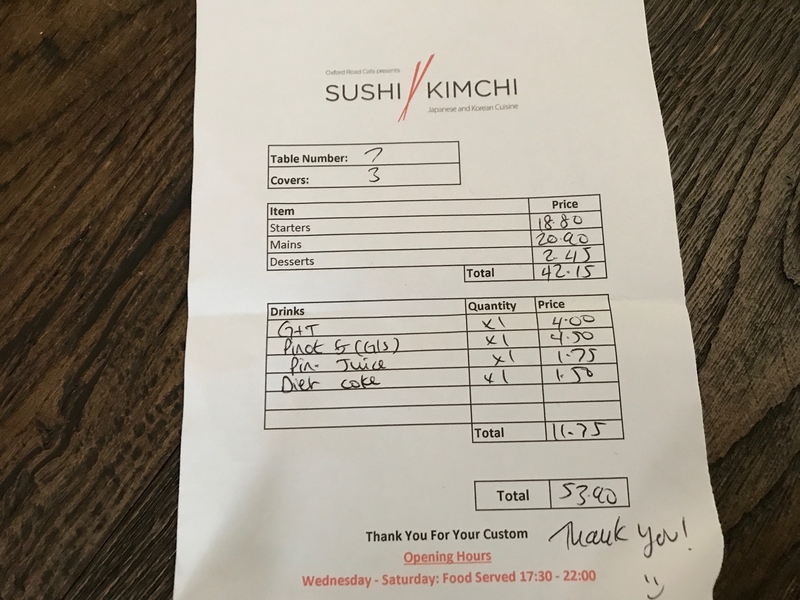