Kelly Bishop assesses whether this place is worth a daily, weekly or monthly visit

I’ll be honest, a food concession in Debenhams is not somewhere I’d think to go for a glam Friday lunch with a friend. But with over 700 kiosks in supermarkets, train stations and airports in ten European countries, Sushi Daily is a thriving take-away chain - albeit one I’d never heard of until they opened here in Manchester last month.

To be fair, you could smother a ceiling tile with salty-sweetly intense unagi sauce and still call it a winner

Most of their outlets are in mainland Europe, with the recently opened Debenhams branch being only their second ‘eat-in’ branch in the UK. With some trepidation, I negotiated past the perfume squirters to investigate.

My first impression was of a minimalist cafe space, holding no more than twenty covers, with a fluorescent-lit fridge full of plastic boxes of take-away sushi. So far, so standard. But a closer look revealed some interesting fare to ring possible changes from my regular spot.

Among the usual suspects I noticed some substantial rice bowls topped with pretty sashimi roses (Chirashi) and a FOMO inducing range of colourful dragon rolls, some generously dusted with crispy onions. Everything is labelled ‘raw fish’ or ‘no raw fish’ so it’s easy to avoid the raw stuff if it’s not for you. There’s nothing quite as mayonnaise-heavy and bastardised as the stuff you get in Australia and NZ, but the quirkiness and range on offer is a sign of the UK’s growing appetite for sushi.

Although you can nip in for a takeaway box whenever you like, we wanted the eat-in experience so ordered the ‘Debenhams exclusive’ platter for two with a couple of glasses of Prosecco for a very reasonable £15.

The sparkly stuff materialised almost immediately at the hands of our amiable server. As we sipped, we eyed a prodigious salmon being expertly sliced into slivers by the in-house chefs in the open kitchen counter. Fresh is the word.

Our platter included six of those just-cut slices of salmon and tuna sashimi, smelling faintly of the sea and slipping down a treat with a smear of sinus-clearing wasabi. A touch of sinew in the tuna made two bites trickier than down-in-one and highlighted my intermediate chopstick skills, but it’s a fairly minor gripe when they’re not making any claims to be upmarket or supreme quality.

Two classic raw fish nigiri (one salmon, one tuna) and a trio of California uramaki rolls (crab-stick, avo, cucumber and a drizzle of mayo) were all good, but the less conventional lettuce wraps filled with rice and cooked tuna mayo I could have continued to pop all afternoon with another glass or two of fizz.

We loved the punchy flavours of whole uramaki roll filled with raw salmon and avocado and drizzled with unagi (eel) sauce and shredded wakame seaweed, giving it the look of a sniper in a ghillie suit. But to be fair, you could smother a ceiling tile with salty-sweetly intense unagi sauce and still call it a winner.

While the platter makes a decent light lunch for two, bear in mind that some pieces come in threes, so you’d have to fight over the third one, or do that awkwardly polite, ‘No, you have it,’ exchange, depending on your relationship.

With half a glass left, we grabbed a couple more boxes from the fridge and were intercepted just before ripping them open to be told that we had to pay for those first or we’d sabotage the barcode.

Bill paid, we cracked open spicy salmon rolls (£4.90 for 9), liberally dusted with shichimi and with spicy mayo inside. So how ‘spicy’? Very, and decent value.

I’m a fan of anything I can eat with my hands, so the cone shaped temaki, or hand roll, is usually a winner. A shrimp one (£3.90) turned out to be more salmon, with generous slices of avocado and a sprinkling of sesame. We braved a pack of six cold chicken gyoza (£4.30). I wasn’t too keen on the idea of a cold dumpling and although they were packed with flavor and freshly made, a hot version would elevate it  - but they don’t have any cooking facilities to produce hot food. 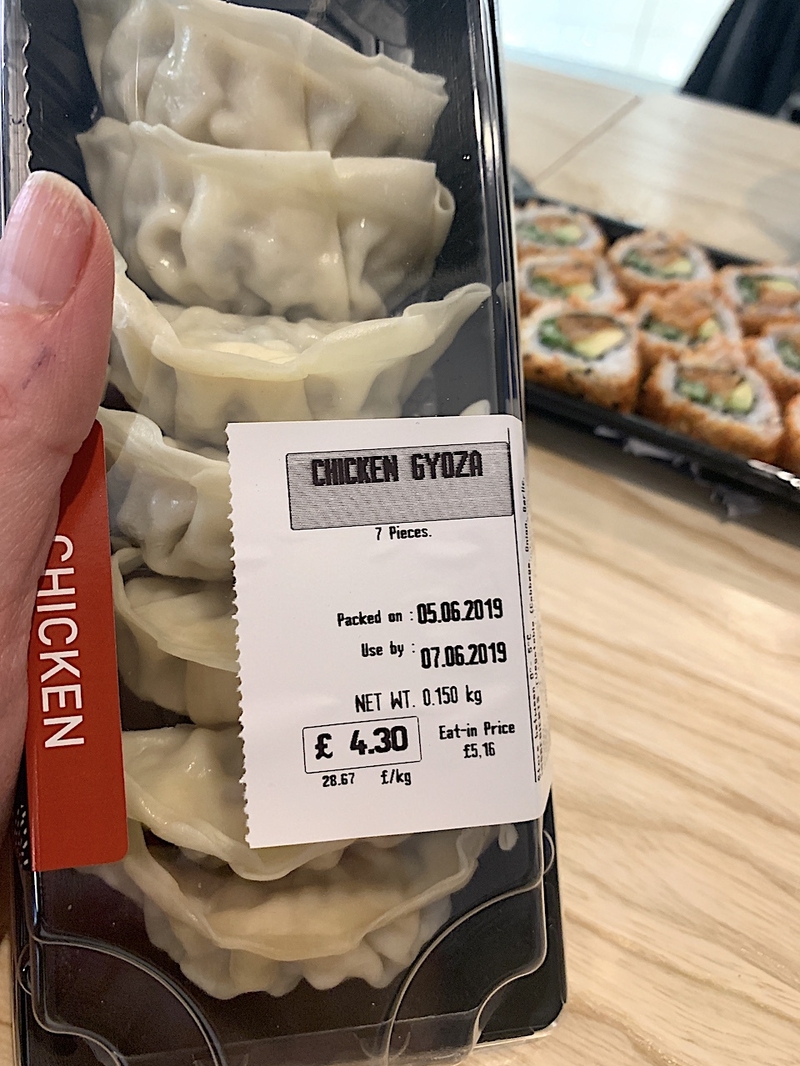 We had picked out some squishy mochi for dessert, but were stuffed so took them away with us for a mid afternoon sugar rush. Quite a feat with sushi where you can be left still wanting long after you’ve hit your budget.

If you’ve never eaten mochi, they’re basically stuffed sweet cold dumplings, made with glutinous rice. The chocolate one was like an intense squashy rich truffle, but whoever decided to make strawberry cheesecake ones (£2.50 a pair) is a visionary. I won’t be able to ever walk down Market Street again without nipping in for some more of those.

With a number of reasonable sushi options already dotted about the city, Sushi Daily sits just a cut above the decent high street outlets. It’s classier than a conveyor-belt diner, but not as fancy as a dedicated restaurant. That said, the food on offer certainly gives some competitors a run for their money. It’s fresh, it’s a bit unusual, and it makes Debenhams worth a visit for more than just your auntie’s birthday pressie. 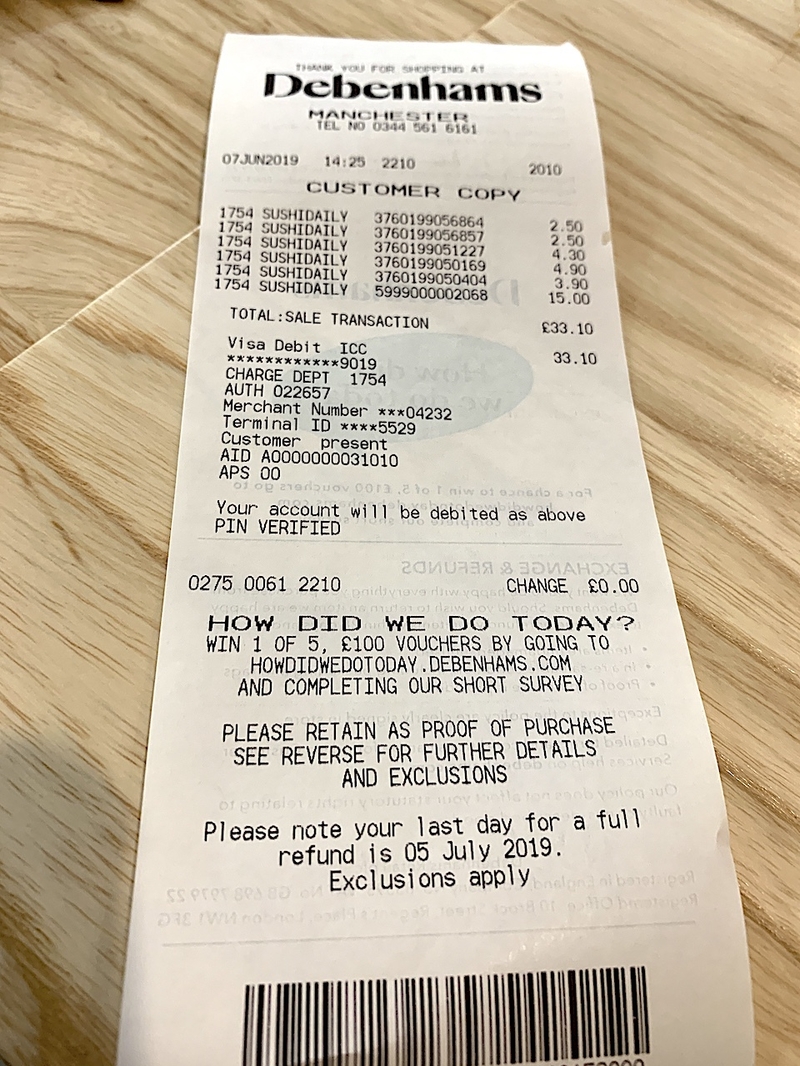