IN THE world of weird fiction, none come weirder than Jeff Noon. Back in the nineties the Droylsden-born writer shook up the sci-fi world with the surreal and visionary Vurt– a hare-brained, hallucinogenic caper in which Manchester served as the template for a unique and inimitable dystopia.

Part futuristic fantasy, part acid fiction, the bleary, breakneck tale of Scribble and his fellow ‘stash riders’, their attempts to reclaim his sister from the depths of the virtual ‘Vurt-world’, and their copious ingestion of Class A psychotropic feathers seemed to capture the mood of the post-rave, post-Hacienda come down.

An instant cult classic - there’s even a role playing game now - the novel garnered legions of fans across the world for the former Deansgate Waterstones bookseller.

“I still get asked where the stash riders lived,” says the author, on the phone from Brighton, where he now resides. “It’s on Platt Lane by Oxford Road. Me and my friend Nick used to go round there a lot, I just added a floor at the top of the house for the purposes of the book. The guy that lives there once told me he gets people knocking on his door asking 'is this where Scribble lives..?' ” He laughs. One could only imagine what kind of state those individuals would have to be in.

After a spell away from the literary spotlight Noon seems to be back with something of a vengeance. Having cemented his name with that momentous debut and its trio of no-less-dazzling sequels, the juice seemed to go out of his career for a while.

There were the experimental pieces, underlining his commitment to extending the form, then a protracted and ill-starred film project which foundered after several re-writes. It’s since teaming up with publisher Angry Robot, and the resulting John Nyquist series of books, that Noon has been returned to the front line of contemporary genre fiction, where he undoubtedly belongs. A suitably surreal take on the traditional ‘hardboiled’ detective format, the series offers a mind-melting alternative to the scenarios which tend to dominate the crime and sci-fi shelves.

My career has always swung between those two ends of the spectrum: experimentation and storytelling

“I wanted to get back to pure storytelling,” he explains. “My career has always swung between those two ends of the spectrum: experimentation and storytelling. Those are the two things that I love and I’m always trying to do them in various ways. I’d been working on the Nyquist idea for a number of years, on and off, trying to work out the plot, putting it aside again…it was one of the things I’d always go back to, trying to crack the code and so on. And then…”

And then…in the case of that first Nyquist offering, A Man Of Shadows, the code that needed cracking might offer an insight into the kind of brainilingus Noon tends to trade in: how to conceive of a crime which is invisible to the naked eye for reasons relating to a distorted physics of time. Once he’d figured out that minor conundrum - no spoilers here - the elements were in place: a city half in darkness, half in light; a population hooked on the gratifying rays of the sun; a world made mad by a multitude of privately-owned time zones, all running concurrently and in fierce competition; a runaway girl and a serial killer who seem to crystalise the undimming malaise.

If that sounds like a head-trip then wrap your temporal lobe round the mind-opera served up in new instalment, The Body Library, where we find our hero in a new town, Storyville, a place where people’s lives are made of pure narrative and their tales subject to the auspices of the police. Where characters get high smoking the ink off burning manuscripts and word sickness can strike at any time. When Nyquist happens upon a corpse in a decaying tower block he begins to unravel a terse and tangled plotline, all leading to a body strung from a tree as though it were knowledge itself dangling from the frame of a gallows. 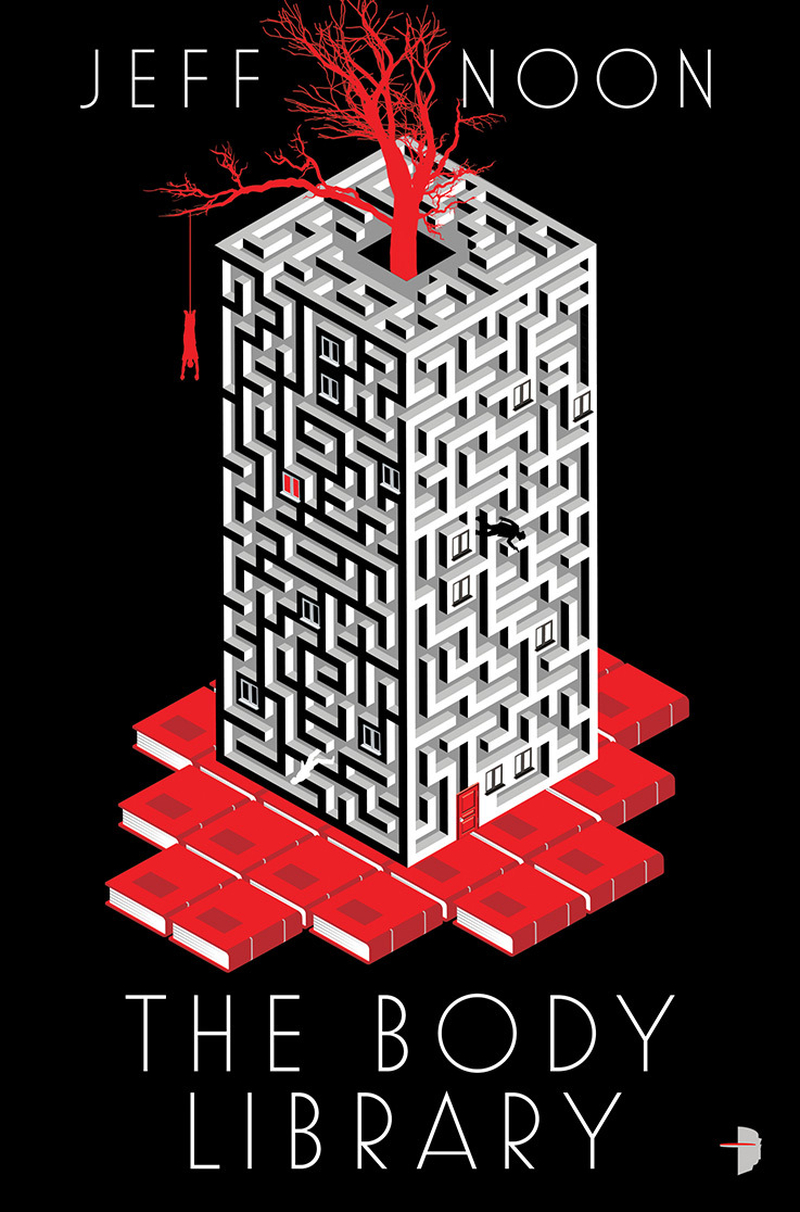 “I only had six months to do this one, so it’s much more fevered in its creation,” says Noon. “As with the first book it’s set in 1959, and in terms of alternative history I looked for things that happened that year. It was the year Brion Gysin invented ‘cut up’ technique [taking a pair of scissors to a text, like William Burroughs used to do with his novels and David Bowie with his lyrics] so I began to construct a novel that’s like a text made from all these other texts, that would hold some kind of power, and the key to a mystery of some sort.

“It goes back to discovering Borges [crazy-ass Argentine short story writer] for the first time. I found a copy of Fictions, his famous collection, in a second-hand book shop in Leeds, when I was about twenty-one. I opened it at the first page and half way down a sentence jumped out at me: “Mirrors and sex are equally abominable because they both multiply the numbers of men.” I’d never read a sentence as imaginative as that in all my life. It’s in a story about some people who create an encyclopaedia which starts to infect the world. About the strange world which is described in it. How the people live, how they relate to language...”

he can take you on a journey over four hundred pages, obey no rules of space, time and fiction, and yet still keep you hooked

That’s a testament to Noon’s commitment to the virtues of an untethered imagination: where nothing is impossible and no holds are barred. His brilliance as a writer is that he can take you on a journey over four hundred pages, obey no rules of space, time and fiction, and yet still keep you hooked on a spiked bread-trail of characters, images and plot turns. His novels pursue a bizarre, and yet perfectly readable, dream logic. It ought not to work, yet somehow Noon spins rainbows out of ideas.

Happily, this bona fide Mancunian legend is back in demand. Later this year there’ll be a first foray into conventional crime fiction called Slow Motion Ghosts (“about a group of kids who create an imaginary village, and how it affects them in later life”) then a fifth Vurt instalment (“I think Scribble is going to become the Game Cat…”) then after that a third and final Nyquist novel (“probably set in Manchester”).

The notion that Jeff Noon might return to remind us how uniquely brilliant his body of work is should send a rush to whichever part of the brain is gratified by genuine greatness. The new work is every bit as compelling as that which went before – if not more so – and all this from a man who says, effacingly, that until recently people may not have realised he was still alive.

The Body Library is out now, published by Angry Robot.