Week 45: in which Sleuth shows off his underbants

Sleuth doesn’t care if he’s a very old man but this sort of behaviour needs to be stamped out. Vandalising street furniture is inexcusable even if you are 2,500 years of age and have a few good lines. Sleuth would ring the police up, after all he has a description and a name, but given the current mood at the moment he’d probably just be fobbed off with something about stretched resources and how arresting ancient Chinese philosophers is not a priority.

Sleuth hears there was a debate in the city centre residents’ meeting on Thursday about the nine litter enforcement officers who go around fining miscreants £80. It was mooted that the parking enforcement officers in the city centre, of which there are approaching 200, should double up as litter monger chasers. Good idea thinks Sleuth, although he doesn’t understand why they’d need upskilling and more training to do the job as was suggested from the top table. Surely if trained in one field of enforcement you’re trained in another? They could also keep an eye out for that bloody vandal Confucius with his painting gear.

King Street and St Ann’s Square are in the doldrums when it comes to retail. It seems food and drink can be the only salvation for what were high-end retail units, which doesn’t seem likely given the chill wind blowing through food and drink as well. Sleuth was in St Ann’s Square with a chum the other day when his friend pointed to one of the larger units and said, “That certainly creates a gap in the market.”

Sleuth's architecture diss of the century

Sleuth is pleased that the demolition taking place on Brazennose Street in the city centre has revealed this view of Manchester's St Mary’s Catholic Church, on Mulberry Street. The earlier church on this site from 1794 was the first purpose-built Catholic church in England since the Reformation. The present building dates from 1848 by Weightman and Hadfield. This is sign-posted all around the city as 'The Hidden Gem'. Not all have agreed. The noted architect Pugin, in petulant mood, said the building “shows to what depth of error even good men fall when they go whoring after strange styles”. Not that

Sleuth tries to use his iPhone dictation setting on his phone notes but despite speaking as clearly as possible the messages keep being misinterpreted. It must be his northern accent. He recently tried to send a message which read ‘negotiations with the polymath’, the iPhone interpreted it as ‘Go sea Asians with the potty mouth.’ Sleuth studied it awhile and decided to send the message. He didn’t much like the person he was communicating with anyway.

Several years ago Sleuth showed some BBC bods around the region over two days. The first day involved a city centre tour, the second a tour of places across and around Greater Manchester. The guests had been offered relocation packages in MediaCityUK. As the tour finished one of the gents, a senior figure, thought Sleuth, approached. “Wow,” he said, “I didn’t realise Manchester was so good, never been before. The buildings are amazing, the stories too, and some of the surrounding scenery really spectacular. But I’m not relocating.” “Fair enough,” said Sleuth. “No,” said the man, “I wouldn’t want my kids to grow up talking like you.” Sleuth bellowed with laughter at the man’s brutal candour. “Good on yer,” said Sleuth.

Sleuth dropped into The Corner Boy on Stevenson Square this week, which has replaced West Corner. The sign outside says 'Irish Bar & Deli'. An Irish deli? New one to Sleuth that, as is hanging bras from the ceiling. "I wonder why there's no g-strings up there," said Sleuth to the bartender, "I've heard they're much better for the craic." The bartender is probably still laughing now. 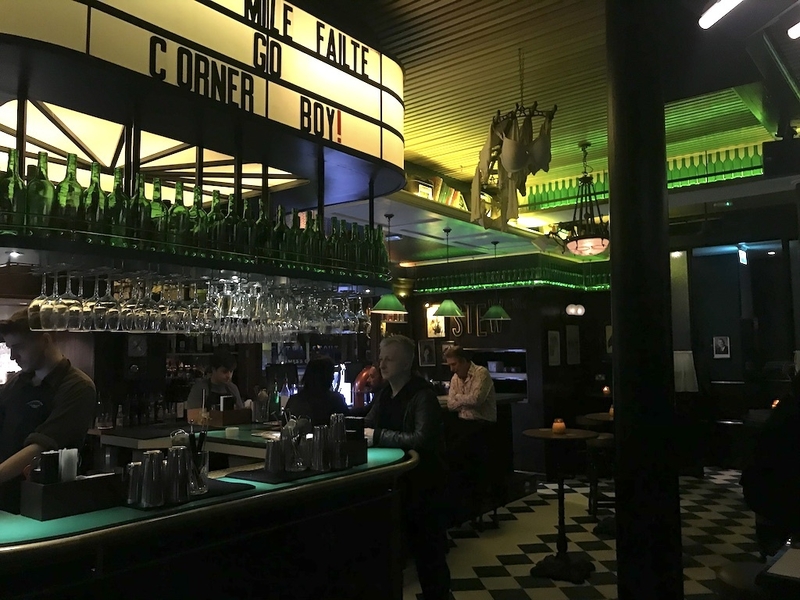 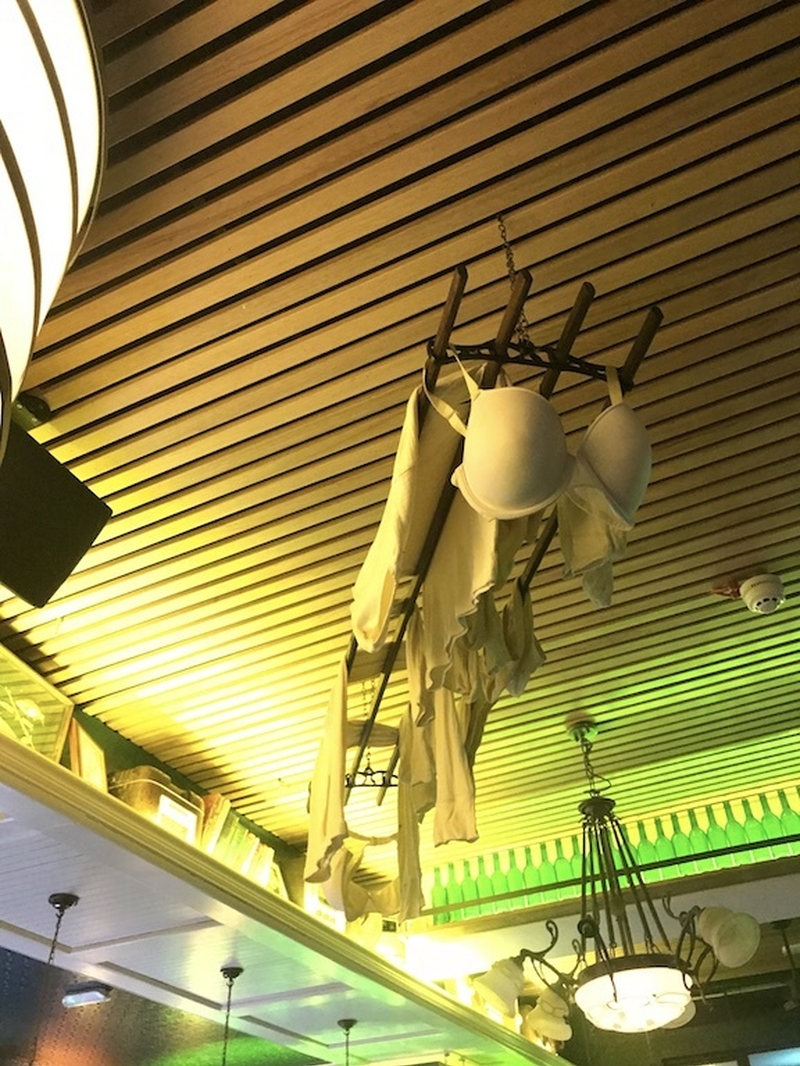 Sleuth’s Northern Irish mate was at the premiere of Peterloo at HOME recently. As he was leaving he took a photo of his lady on her bike as the Engels statue looked on at the red carpet VIP preparations for a film about the working class struggle for some sort of equality. He was accosted by a security man telling him, heavily handed my, to move on quickly as there was a Premiere happening. Sleuth’s buddy said ‘I lost my temper proper Belfast style and apologised to all who witnessed it but I was upset about being told the bleeding obvious. It were just like Peterloo all over again. Well, I bit. Not really as it happens, but I felt it was a small rebellion against the misuse of power.’

Sleuth has enjoyed the use of safety cones this week. First in Chetham’s for some prone Christmas trees - pine cones perhaps - and then in Castlefield to warn people of an upside-down and clearly dangerous pumpkin head. 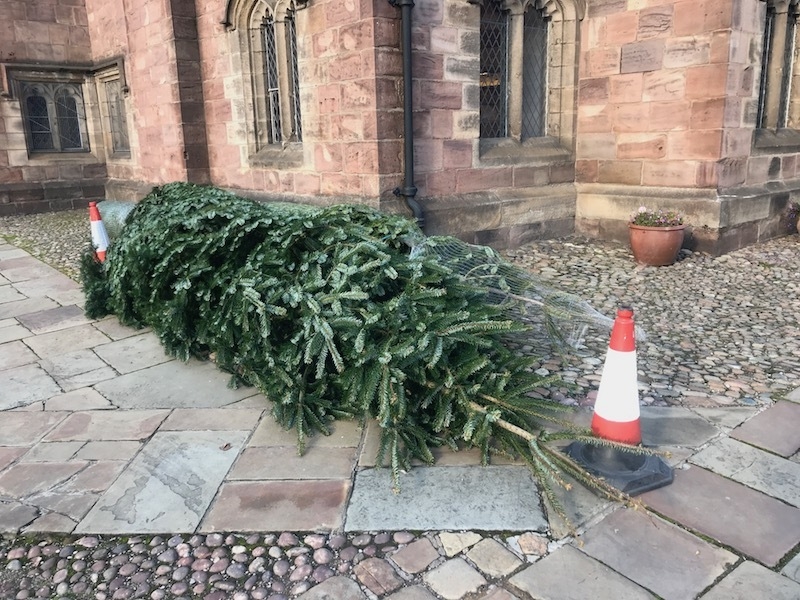 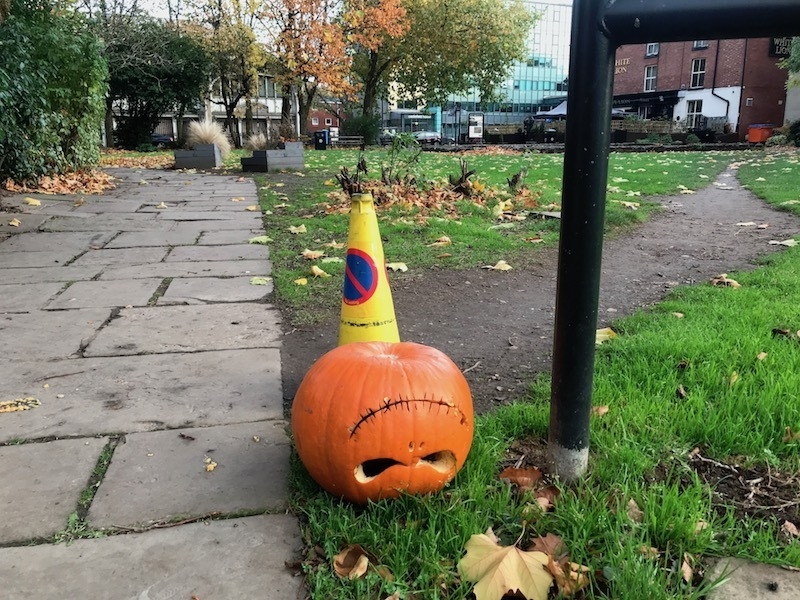 Sleuth's tshirt brag/lie of the week

Sleuth bets a fiver that this lad doesn't and never has... 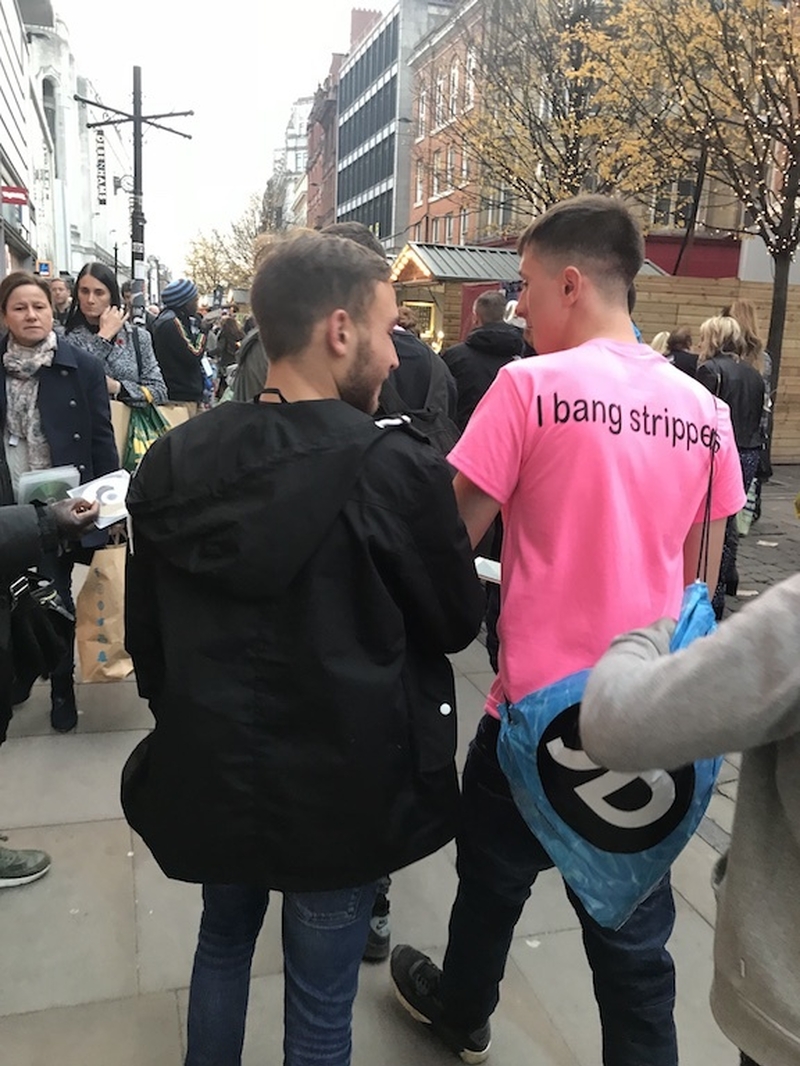