Russian Manchester festival postponed + excited skyscraper + how not to eat

Sleuth week 11: "The only one party state we want here is one legitimately voted in"

Sleuth hears the Russia-Manchester Festival has been cancelled after chief sponsor Zizzis withdrew. A council spokesperson said: “The only one party state we want here is one legitimately voted in by the electorate, without any fear or favour from a single strong man - we don't want anybody else put-in, ha geddit? That’s what Sir Richard Leese told me to say anyway.”

Sleuth was briefed by a Russian consulate spokesperson, Conrad Karnevski. He said: “The festival would have been far bigger than your Christmas Markets. We would have helped promote it through all our extensive cyber-channels. The city clearly has lost its nerve. Gassing on about Russian propaganda is typical of the West. Now where can I buy an apartment in your Northern Quarterski? I have millions of oddly procured money from oil and gas profits. Oh and do know how many nuclear weapons we have? I think I meant types of vodka, not nuclear weapons. Vodka. This predictive text situation is a conspiracy from the West designed to mock Mother Russia.”

Sleuth enjoyed this story about The Assembly bar in Urmston which had all its worst Facebook reviews published on t-shirts for its staff to wear while working. Comments printed on the t-shirts included “Hipsters overtaking Urmston with their artisan shit” (overtaking?) and “Sounds like Harry Potter tackle to me”.

Sleuth thought this may be a good leveller for Confidential’s restaurant critics, so suggested to the editor that he have a t-shirt printed for each writer to wear around town, containing the best insult directed at them over the years. You know, to keep them grounded. Comments so far include:

For Neil Sowerby: “Are you that clever tosser Schofield?"

For Ruth Allan: “How can you review us properly? You fell out of the restaurant pissed.”

For David Blake: “Who gave this nob a job?” 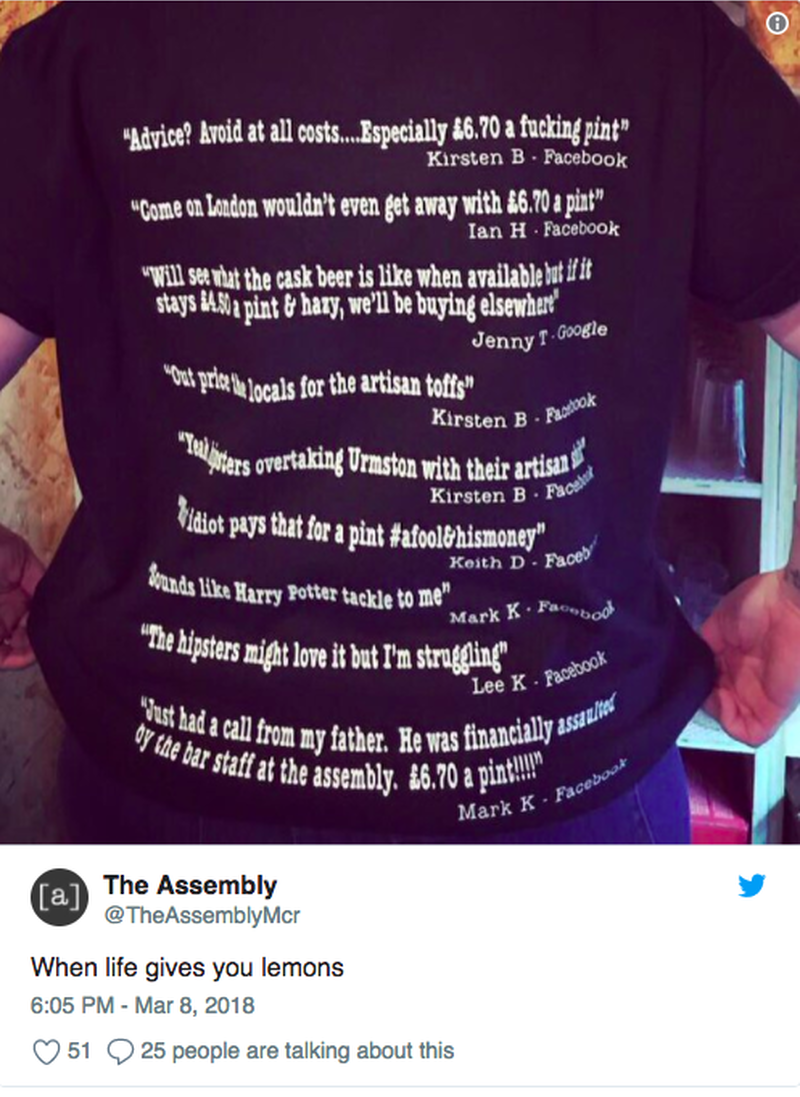 Sleuth sees that Allied London have just launched another new scheme for St John’s at this year's MIPIM conference in Cannes. It’s called the ABC building, not to be confused with Allied London’s XYZ building in Spinningfields, which opened last year. AL boss Mike Ingall told Sleuth that his firm were working through plans to connect ABC and XYZ with another scheme, but were struggling to find a plot for DEFGHIJKLMNOPQRSTUVW. "Nowhere is long enough to fit the bloody name above the door," said Ingall.

Sleuth was also pleased to see that a flower bed had made it to a VIP drinks reception at this year's property conference. "Green space is very important for building communities," said the flower bed, "now pass the bubbly would you?" 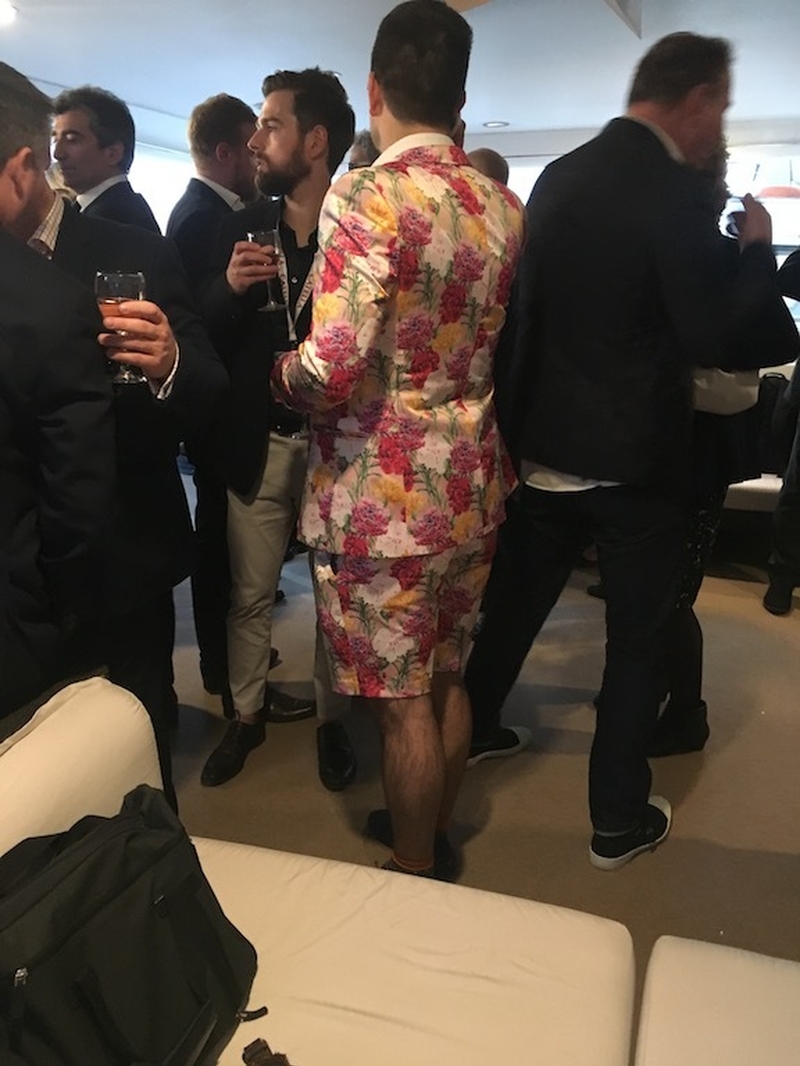 Cllr Blundell also had a quick chat with one of Manchester's most eminent architects, Ian Simpson, of Beetham Tower fame. Blundell asked Simpson what stood out for him at MIPIM this year. He replied that he "liked the Owen Street towers" by his own practice, SimpsonHaugh, currently under construction at the bottom end of Deansgate. However, by the looks of things, he doesn't like them quite as much as Beetham Tower does. Now that really stands out.

Sleuth enjoys hospitality. He was in Fallowfield so he went to Chancellors Hotel. This has been the place of residence of not only luminaries such as Joseph Whitworth, of the Whitworth Art Gallery, and CP Scott, of the Manchester Guardian, but also of Manchester University bigwigs. That’s the University, folks. So when he saw across the hotel crazy spelling mistakes starting with ‘tarrif’, Sleuth could not help but take a member of the management by the scruff of the neck and yell, “I thought you were part of the Russell Group of universities, pay some bloody attention to detail!”

SHIT FOOTBALL MANIFESTATION OF THE WEEK

Sleuth was in the Cooperative Bank trying to argue the case why they should sponsor the Russian Manchester Festival celebrations to the tune of £10 million now Zizzis have pulled out. Whilst in there he saw the worst example of petty minded footballness for a long time. Just a little left of those strange pens somebody had written in very small writing ‘MCFC ok.’ I hope he, it must have been a ‘he’, felt better for it.

HOW NOT TO EAT

Sleuth was at the annual Fancy Dress Costume Ball for the adorable Maggie‘s Charity at the Lowry Hotel on Saturday. The winner in the 'Gurning and How Not To Eat' category was a daft man in a green hat sporting a flamboyant feather. 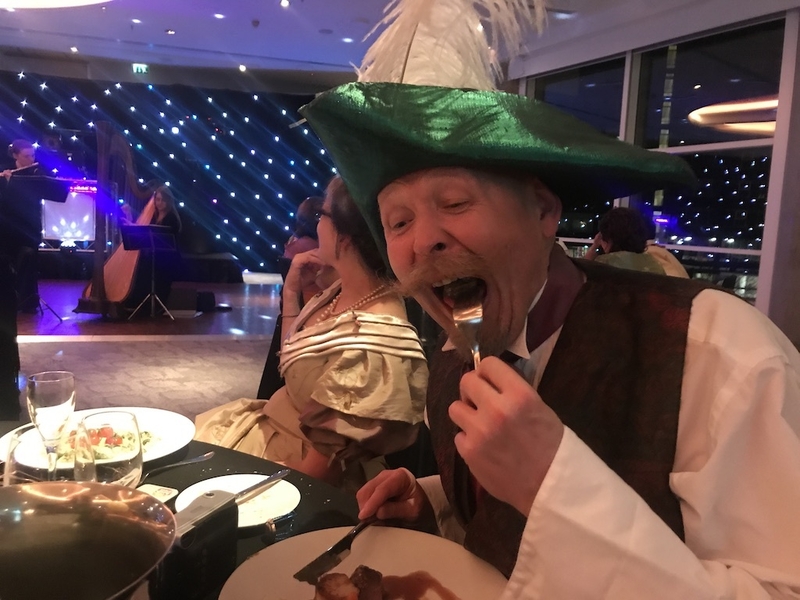