SLEUTH AND HOW THOSE ST MICHAEL'S TOWERS WERE DREAMT UP

Sleuth was at the new Gary Neville-owned restaurant, The Rabbit and the Moon, on top of Urbis. He got the 'Rabbit's Ears' described in Gordo's recent review as 'posh prawn crackers, but very good ones, beautifully seasoned with flavours that lingered on the palate'. Sleuth was struck by something else as well. Was this dish the inspiration for the Neville consortium's St Michael's towers? Must be. In which case, Sleuth is looking forward to some more architectural ideas based around the menu. How about a roller-coaster for Albert Square based on the crispy red Thai curry? Or perhaps a redesign of Central Library based on that Chinese bacon butty?

DRINK IS A TERRIBLE THING: PART ONE

The editor-at-large, Jonathan Schofield, and many many other lushes and luminaries, including Sleuth, were at the first birthday party of El Gato Negro on King Street. It was a grand occasion full of fine chat and drinks. Confidential writer Neil Sowerby was having a proper scrap with his favourite tipple, negroni. After the sixth it was clear the negronis had won, so Sowerby was packed off with his wife Theresa, who'd lost her own fight against white wine, back to the train and Todmorden. Meanwhile Schofield was having issues. It looked like his coat, containing his house keys, had been nicked. The following morning the much taller Schofield receives a call from the much shorter Sowerby. "They put your coat on my back," he says, "and I didn't notice until this morning it wasn't mine. Neither did Theresa, which is strange since it's about three sizes too big. I must have looked like an extra from Billy Elliot." Mystery solved, laughter follows, health warning issued about negronis.

Whilst sharing fine chat and drinks with many many other lushes and luminaries at the El Gato first birthday party, Confidential’s Gordo seemed uncharacteristically sheepish. “Something up?” asked Sleuth. “I’ve just remembered it’s the anniversary…” said Gordo. “The anniversary of what?” inquired Sleuth. “Of the night…” said Gordo, now at a whisper. “Go on...” said Sleuth, pulling up a stool and relieving a negroni from Sowerby’s hand, now asleep on the bar. “Well, last year during the opening party,” started Gordo, “like a silly old twat I thought it perfectly reasonable for me to see off a full bottle of Spanish sherry… to myself. Next thing I know I’m waking up face down on my bedroom floor desperately needing the toilet and dressed only from the waist up. Dashing for the loo I trip over my trousers and begin cartwheeling down the stairs, relieving myself as I go, up a number of expensive paintings I’d recently acquired from the Royal Academy.” “Oh dear,” said Sleuth, stifling a giggle. “Were you hurt?” “Yes I knocked myself out,” said Gordo, “though I think the cleaner had a much rawer deal… because the first thing she saw that morning coming through the door was my dangly knackers.”

BUT DRINK CAN ALSO BE A GOOD THING

Serious Sleuth now. Sleuth was at Albert Square Chop House this week, toasting the life of their lovable bartender, Rhys James, 37, who sadly passed away last month following a battle with cancer. To help raise funds for Rhys’s charity, Shine Cancer Support, Chop House owner Roger Ward is stocking a specially brewed JW Lees beer, Rhys’s Remedy, in Albert’s and Sam’s, with 10p from each pint going directly to the charity. “The beer was never supposed to imply a remedy for cancer, just all the shit that comes with it,” said his widow, Rhea. “Rhys believed socialising to be a vital part of tackling the illness.” “He certainly had good fun at the final sampling in the brewery,” Ward told Sleuth, “it was his last night out so he sank six pints of the stuff just to make sure it was right.” Sleuth shall be back to do the same.

PIZZAS AND TRAINS AND BILLS

Another legendary story from Neil Sowerby was featured on Sleuth a couple of years ago. Sowerby writes about wine amongst many things. On one occasion feeling peckish after several wine tastings he nipped into the now defunct Pizzeria Italian for a pizza and a glass of heavy red wine. This was on the way back to Victoria Station and his train. He fell asleep with his forehead resting between knife and fork. The waiting staff didn’t want to wake him so they put the pizza on one side of his head and the wine on the other side. After a bit they put the bill close to the top of his head. Eventually our hero woke, looked at his watch and found he only had seven minutes to make the train. So he threw down his money and fled, leaving the pizza and wine untouched. “I was really hungry on that train,” he recalled.

Sleuth would like to play a game with you. You can stay sat down, it shouldn’t take long, two seconds perhaps. This game is called ‘Spot The Craft Brewer’, and involves looking at a group of people – in this case 20 food and drink professionals gathered together to toast the 20th anniversary of the Manchester Food & Drink Festival - and attempting to spot which of those people is most likely involved in the production of craft beer.

Each of the 20 food and drink pros were asked a few short questions at the photo call, including what they were doing when the festival began in 1998. Answers ranged from 'working as a marketing manager for Sony Playstation' to 'DJing in nightclubs and watching MTV'. Though the answers from veteran chef Harry Yeung of The Yang Sing (above, bottom left) stole the show for Sleuth:

What is your current restaurant/project? "The Yang Sing"

When was your first festival involvement? "1998"

SLEUTH AND THE GREATEST GAG

Sleuth was in Lupo café on Chapel Street , Salford, having a quite remarkable breakfast and chatting to the affable owner Nico. “I think the biggest celebrity I’ve had in here from the Lowry Hotel was Cyndi Lauper, all pink hair and very charming. She really liked the coffee.” “Did she come just the once?” asked Sleuth. “Eh? Well…” began Nico. “Or did she visit Time After Time?” asked Sleuth, slapping his thigh, cocking a pretend pistol and for the seventh year running winning the 'Allcomers Most Humorous Person in Greater Manchester'.

Sleuth was asked for directions this week. Fortunately, he remembered his favourite Deansgate street sign. “So if you go straight on you get to the Cathedral,” he said, “the Town Hall is to the right, but IF you need to go left, that’s where you’ll find the Ring Road, the bats and Hell.” 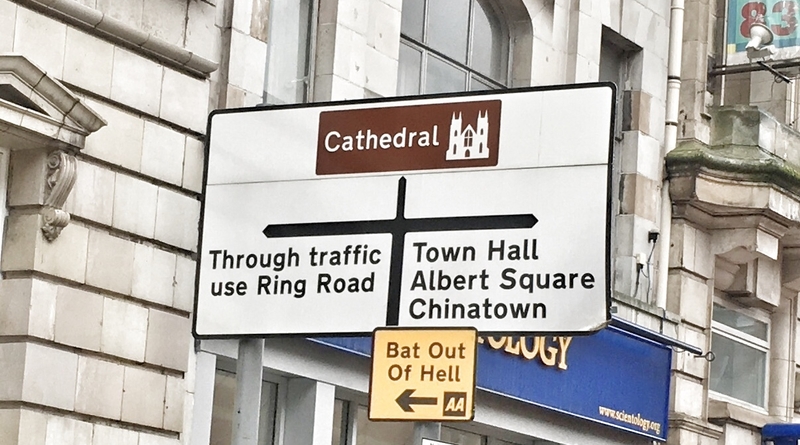 SLEUTH’S DISTURBING PICTURE OF THE WEEK

Saturday and the streets are filled with trouble, Manchester has become a dystopian vision right out of Grand Theft Auto. The police are corralling youths in cages as we can see in the picture below. Well…no. These are smokers from Albert’s Schloss in their smoking enclosure. Nearby a police car happens to be parked. Sleuth was passing by and got a shock for a minute and then thanked his lucky stars his only major vice is booze rather than fags. In fact the image disturbed him so much he nipped into the Sir Ralph Abercrombie pub, opposite, for a drink.

SLEUTH AND THE FIRST TRAM

Sleuth had been reviewing a lunch for Confidential and while walking back through St Peter’s Square saw an army of Manchester movers and shakers, the Lord Mayor, Metrolink Director Peter Cushing and Councillor Nigel Murphy among them. They beckoned to Sleuth and he went over. “Come on the first journey of the tram down Cross Street on the Second City Crossing,” they said. So Sleuth did and very enjoyable it was too. At Victoria Station he grabbed a word with Peter Cushing who told Sleuth how the new line will help prevent potential city centre bottlenecks and increase capacity. Sleuth was pleased with himself, he’d got a tidy reply, had a nice trip and not been childish in any way about Peter Cushing’s name.

ONE UNITED KINGDOM IN AN EGG

Sleuth was in Brink bar on Bridge Street and he was hungry. One item attracted his attention. It was the 'Full English Scotch Egg'. Sleuth whipped out the phone and told Nicola Sturgeon to get straight down. Three pints in and two eggs later, Sturgeon was leaning against Sleuth, big grin on her face, declaring the end of any ideas of Scottish independence, singing God Save the Queen, with occasional breaks to bellow to bar regulars, in an enthusiastic if poor Manc accent, 'Give us a kiss, love'. 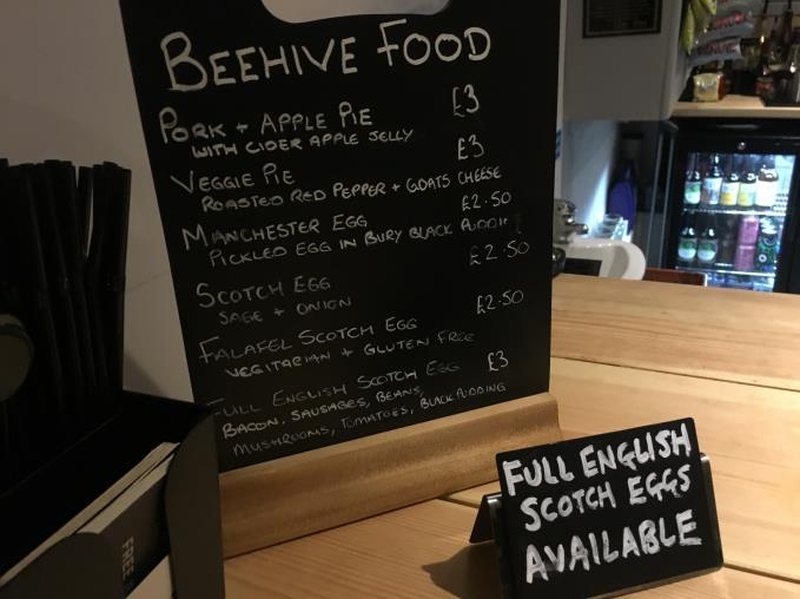 Regular followers of Sleuth will remember his pal The Lonely Polar Bear of Salford, who, without explanation, stood guard on a barren patch of tarmac outside the One New Bailey office building for the best part of three months. Come Friday morning and the beast had disappeared. “The Polar Bear… it’s gone,” said Sleuth, with as much dramatic flair as he could muster on entering the office. “Oh I know where it is,” said Sleuth’s colleague, Vicky Smith. “I saw it on Twitter, he’s now in Macclesfield.” “Blimey,” said Sleuth, “that Storm Doris couldn’t ‘alf blow.”

SLEUTH'S MOST CHILDISH HEADLINE OF THE WEEK

"Gee, thanks for that," texted Joan Davies, respectable city centre councillor and Confidential theatre critic, following the publishing of her latest review.

Long pause. Then, a reply from Cllr Davies: "Well, I'm not saying it's not funny..." 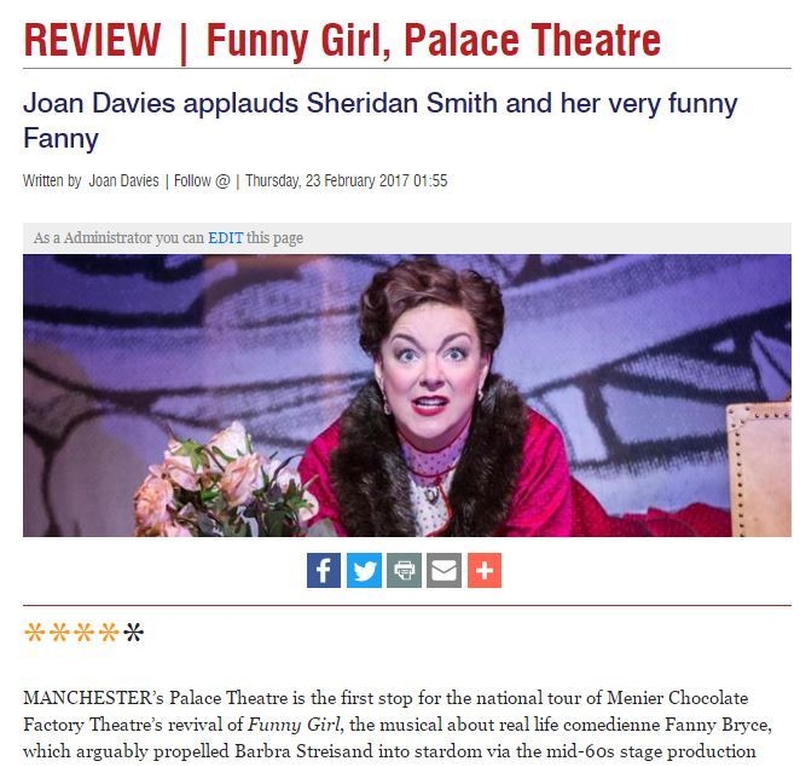 Sleuth was walking down John Dalton Street, where work has begun to redevelop St James House, when he received a mixed message from contractor Styles & Wood. 'Come in, take a look around, sit down, have a cuppa,' the sign seemed to be saying to Sleuth. Then further down: 'No, no we're joking, we'd actually prefer you piss off.' 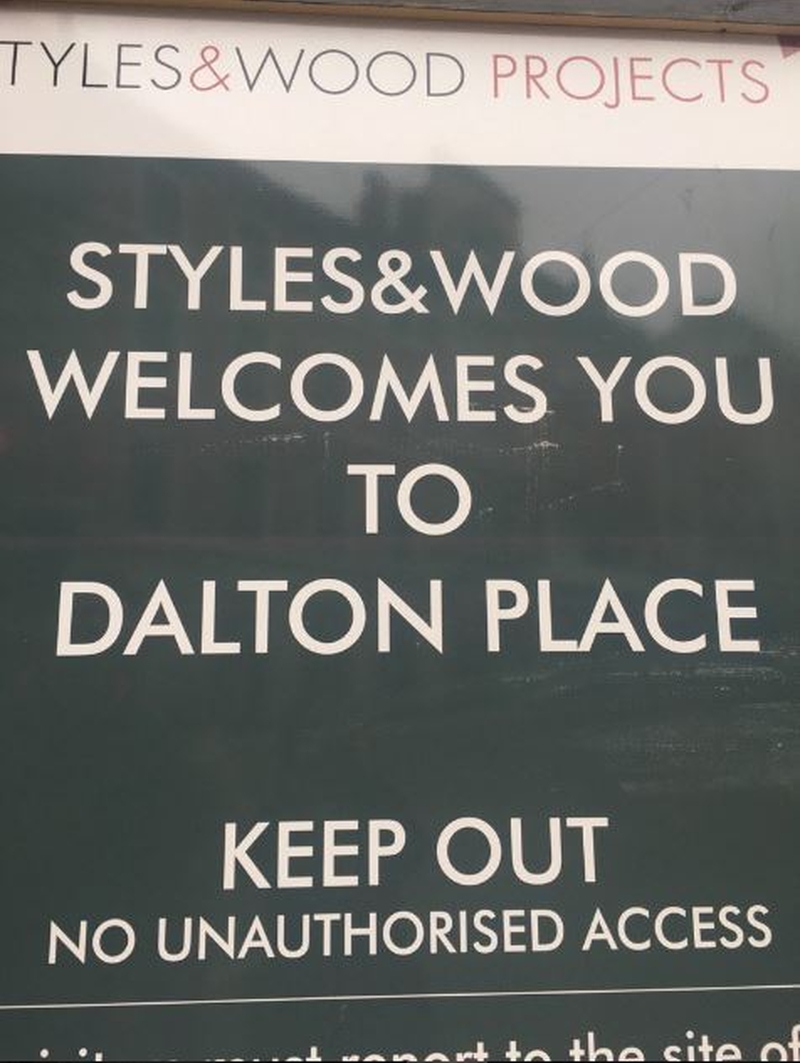