Sleuth - ousted Tories, overflowing flowerbeds and is that Phil Neville?

Week 18: in which Sleuth worries about signs (again) and eats crickets

Sleuth sees that the Conservatives have lost their fourteen year grip on Trafford following the latest council elections. Poor young Sean Anstee. Sleuth went to see him, and that nice young man, the now former leader of Trafford Council, was in tears. “It’s rotten unfair,” he blubbed, while packing his satchel. “I was trying really, really hard and now I will have to go back to college and finish my GCSEs. If only I had done my homework on politics in Greater Manchester, then I would’ve known it couldn’t have lasted. Now where's my Mars bar?"

Elsewhere, there was a huge blow to Labour in Manchester as the Lib Dems made 100% gains, growing from one seat to two. Labour now hold just 94 of the 96 council seats. One political commentator, who'd spent eight hours at the count in Manchester, told Sleuth: "Well that was a turn up for the books wasn't it, touch and go for awhile, edge of the seat stuff... pub?"

Sleuth and the overflowing flowerbeds of Peel Park

Sleuth was in Salford's Peel Park recently. It’s a grand old Victorian place that went rubbish and is now recovering. Well, sort of. Sleuth particularly loved the floral display in the fecund flowerbeds. Or rather the flower display. The single flower, the lonely blossom of the North.

On the way to Peel Park, Sleuth was momentarily struck by fear when approaching a road. Then he read the sign again and realised what he had to do. Howling like a banshee and waving his arms crazily like windmill sails while skipping, then hopping and finally rolling, he crossed the road completely out of control – just like the sign said.

Wise advice of the week

Sleuth found this on his city peregrinations this week. Sleuth nodded his head, you should never feed these. 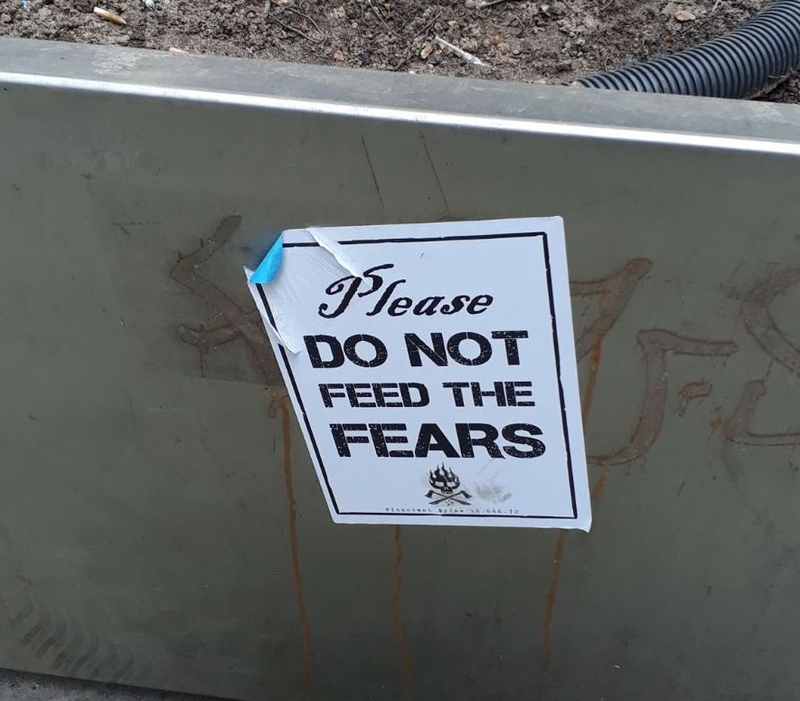 There’s a plaque on a wall in Rusholme marking the spot where in an old chapel the TV show Top of the Pops was first performed in the sixties.

“That’s in the wrong place,” declared one man on a tour of the area that Sleuth was conducting.

“You’re right,” said a lady, “it was round the corner and down the road.”

“I wasn’t here when it was demolished but I’ve seen the pictures,” said the lady.

“You’re wrong,” said a man who’d grown up in the area in the sixties, “it was exactly here where the plaque is.”

“I agree,” said a woman, “I lived there, on that street, and it was definitely here.”

“But I was talking to a local historian and he thought it was not on this site,” said another guest on the tour.

“Yes, I always thought it was further down the road too,” said yet another person.

“No it was here,” insisted yet another man.

“Er…shall we go and look at something else?” said Sleuth.

Sleuth popped into the Windmill Pub in Knutsford on Saturday evening for their excellent fish and chips washed down with a pint of Dizzy Blonde. There was a guy in the car park pulling a parking ticket from the windscreen of his 4x4. Sleuth thought he looked a bit like Phil Neville. When Sleuth spotted the number plate, '23 PN', it became clear it actually was Phil Neville.

Turns out as the Windmill is situated next to junction 19 of the M6, some lower league teams use the pub car park as a meeting point and leave their cars there all day. This seriously irks management, who slap a £10 parking fee on the windscreen of each car.

As Sleuth entered the pub, Neville was, honourably, handing his tenner over and asking the barman how to remove the sticky ticket from his windscreen. "No worries, I'll come out," said the barman, not recognising the former Man Utd, Everton and England player. "Sorry for the mistake, but we've been having trouble with some footballers..."

Batman goes one better on Deansgate

Roaring supercars with obnoxious, attention-seeking drivers have become the scourge of Deansgate. So Sleuth was pleased to see Batman show up this week, scaring off the young pretenders. "The Batmobile is the ultimate supercar, and don't you forget it," said Batman, turning up his Pioneer AVH-4200NEX stereo and honking at a group of young women, "now, where's the nearest Nando's?"

Those wacky pizza-makers at Crazy Pedro's have out weirded themselves with a new special this week. It's called the 'I Don't Like Cricket' pizza and features crispy shallots, mozzarella, lime, sriracha, coriander and, yep, crickets. They delivered one to the office for Sleuth and the team to try. "Howzat?" said the delivery man. Sleuth looked to the umpire, who'd raised his finger. "Get out," said Sleuth.

Things are heating up in the affluent suburbs of south Manchester, as the bourgeois food graffiti face off continues...