Week 42: plus the droopiest veg of the week

This monster appeared shortly after the announcement that the venerable and much-loved House of Fraser (that is known as Kendals by all and sundry in Manchester) was to close. Does the usually humourless Mike Ashley, the new owner of House of Fraser, have a sense of humour after all? Though this addition might seem a bit twisted, given the jobs at stake. Or is this the building's own shock and horror at the decision manifested in a shocked six-eyed cactus?

The city council is recommending that during the year long works around the Mancunian Way’s junction with Regent Road, motorists use this form of transport. It’s good for the environment and easy to park. 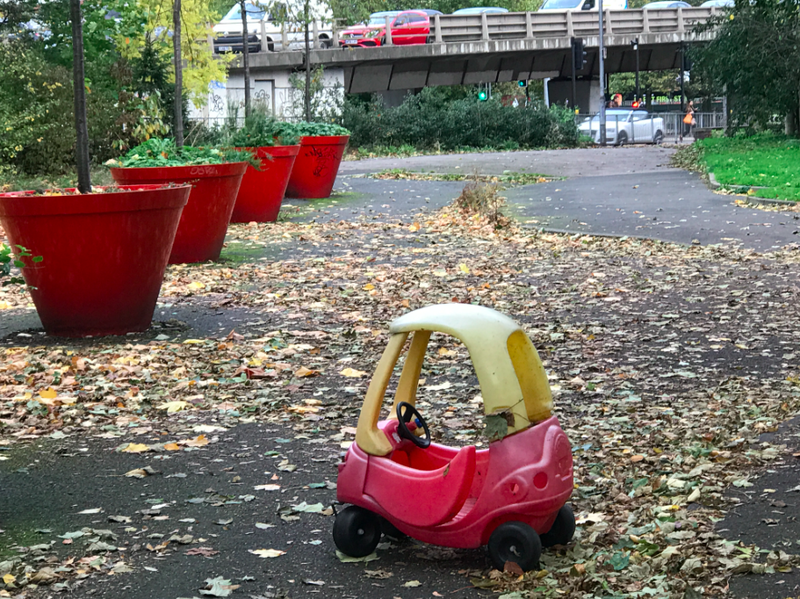 Sleuth got annoyed about a press release last week. It was from the council, apologising for the apocalyptic traffic around the Mancunian Way/Regent Road due to works on the 'Manchester-Salford Inner Relief Route and pledging to finish works a month sooner. What irked Sleuth is not that the council are aiming to finish sooner, clearly, but that they have the capacity to finish sooner. Why wouldn't they be attempting to finish as soon as possible anyway? Why has it taken a load of angry noise from commuters to push them to work a bit harder? Apparently, the possibility of working on Saturdays is being 'explored'. Explored? Why aren't they working on Saturdays anyway? If you can finish the job sooner finish the bloody job sooner. Rant over. Until next week.

There goes the neighbourhood

Sleuth hears the new Peaky Blinders bar on Peter Street, taking over the former Sakana site, is to take authenticity to the next level. "Yeah we're going to keep it proper real by having some bloke in a flatcap and tweed waistcoat with a sometimes Brummie sometimes Geordie accent ride in every half an hour on a horse, check his pocket watch then put a fag out in someone’s eye," the boss didn't tell Sleuth.

Ivy to park the bus in Spinningfields

Sleuth has been invited to a photocall on Monday, to welcome The Ivy - the new four-storey bar/restaurant/shed that's been going up in Spinningfields for what seems like the last three years - which is going to park a bus in Spinningfields on Monday, completing its journey from London to mark the announcement of the opening date (end of November). Sleuth's contact tells him there might be a 'football personality' at the event. Sleuth reckons if they're in need of a football personality to 'park the bus' in Spinningfields, there's a certain Portuguese fella living in a nearby hotel who's been successfully parking buses all over the world for years. Not so much in Manchester. (Sorry that's a football joke, and not a very good one).

Last week on Sleuth we noted how Jonathan Schofield, the editor-at-large of Manchester Confidential (no, none of us really know what that means either) wrote an article about development in the Northern Quarter that provoked a debate. One of the angry heads was ‘Manchester Voice’ who only has legitimacy in self-describing and when challenged went quiet. This week, over a debate about tall buildings, it was the turn of Platt Claremont RA, ‘Residents of the areas bordered by Platt Lane & Claremont Road’. After one exchange Schofield wrote: ‘Oh good, the classic social media retreat into insult and putting words in other people’s mouths. Laughable. Are you one person, by the way, claiming spurious authority because you have created a collective title for yourself, or are you a bonafide group of people?’ The ensuing silence was, once more, deafening.

'Progressives' like Jonathan are totally relaxed about the return of Victorian levels of deprivation and inequality. Its another PR gimmick to attract tourists. The sort of ppl who'd exchange their children for a balloon-on-a-stick because it amuses them!?
— Platt Claremont RA (@PCRA1) October 23, 2018

Awkward moment of the week

Sleuth was buying aspirin in the chemist. Nearby, on the prescription counter, there was an older gent whose volume control was broken on maximum. He passed over his prescription and a young shy-looking female assistant took it. She said something in a quiet voice which Sleuth didn’t catch, then she repeated it, and Sleuth realised she was asking the gent what the prescription was supposed to treat. The gent loudly enquired why she needed to know, the young woman said she’d been told to ask. The gent sighed and then said in a voice so loud it must have echoed from Manchester out as far as Rochdale, “It’s because I’ve had a bloody operation on my arsehole!”

Sleuth was talking to the boss of Tast, the newish Catalonian restaurant on King Street. She’s from Barcelona and loves city living, so she and her husband have converted one of the magnificent townhouses on St John Street into a lovely family home. Further down the street other buildings are being converted into family homes. Sleuth adores this welcome full-circle of history. Built more than two hundred years ago as family homes, the houses of St John Street have spent decades as barristers chambers, doctors surgeries and cosmetic surgery boltholes. Now they’re back as houses. Sleuth’s friend said: “When we first came to Manchester, our Barcelonan friends said, ‘Oh but it is ugly’, yet not one of them had been here. I think Manchester in spirit and even in looks is similar to Barcelona. We’re very very happy here.” Those sentiments warmed the cockles of Sleuth’s heart.

The auction of the Bees in the City last week re-established one hierarchy in the city. The Manchester City bee went for £25,000 while the Manchester United bee topped the whole proceedings at £31,000. Despite Manchester City's current superiority in playing terms it appears the club still has some way to go before it matches the Reds in international reputation. That must sting.

Ah yes bees. "We do things differently" and "On the sixth day..." And what's that say there? "Football"... "ar kid".... "Oasis... "Hacienda"... "Vimto". This is absolutely textbook Mancunianitis, perhaps the worst case Sleuth has ever seen. Shame on you O'Connor Bowden estate agents. Sleuth demands that all involved be forced to spend three days locked in a room with Bez.

Sleuth's droopy veg spotted in Manchester of the week

"Sorry, sorry, really sorry. Look I've had a tough week at work and a few drinks and I'm just a little nervous. This has never happened before. Honest. Oh god it's not you. Shit." 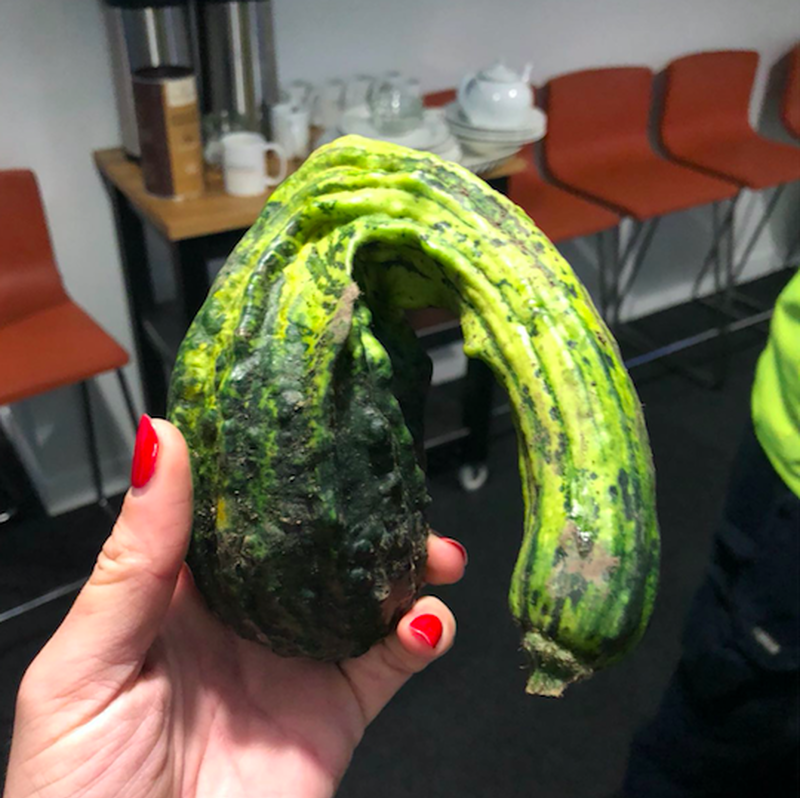