Sleuth: Brexit truth, Green Quarter oddness and a Red gets even with a Blue postbox

Week 40: in which Sleuth discovers the finest fridge in the land

Brexit conversation of the week

This took place at HOME arts centre and went this way...

“The problem now is all the health and safety,” said a curmudgeonly Sleuth after being refused permission to take some people to the top of the multi-storey car park in First Street for the view. “It’s not as if there would be any risk up there. Generally it’s not as if there is any danger in all these activities that have now been banned. What this obsession is really about is chartered surveyors and insurance companies justifying their existences and making money. We live in an utterly risk averse society.”

“Britain, risk averse?” said a voice from over table. “What about Brexit?”

Sleuth was at the Manchester Food & Drink Awards inside the magnificent Gorton Monastery on Monday night. Very good it was too. It must have been, as apparently Sleuth was seen drinking wine from a pint glass. (Sleuth takes Confidential's exemplary reputation at such events very seriously.) Anyway, Sleuth's highlight of the night came during the presentation for best Front of House restaurant - an award bestowed on the restaurant with the most impeccable service and hospitality standards. Demonstrated on this occasion by the executive chef of the award-winning restaurant, who, closing his speech, told the 350-strong audience to "fuck off". "Now that is hospitality," said Sleuth, pouring himself another pint of wine.

Keeping up with The Times

We see Manchester has made The Times 'coolest places to live' list. Again. Last year it was Ancoats, earlier this year it was Castlefield, now it's, er, Green Quarter. Yes that mish-mash of mundanity was lauded by The Times for its parking, its proximity to The Printworks and its fountain. Super cool. Though they did forget to mention the luxury of having to pay to replace your own cladding when the developer realises the apartment block you live in they is a 15 storey fire hazard.

Sleuth thinks next year Manchester's token entry in The Times list could be First Street, for its Sainsbury's, it's crazy golf course and the fantastic views from the top of the multi-storey... not that Sleuth would know.

Jonathan Schofield, Manchester Confidential's editor-at-large (no, none of us really know what that means either) wrote an article about development in the Northern Quarter this week. This provoked a Twitter debate with people generally agreeing, generally disagreeing and others not agreeing at all - naturally. One member of the last club goes under the title ‘Manchester Voice’ with a profile image of the city coat of arms. After a brief ding-dong Schofield tweeted: ‘I would like the Manchester Voice people (or I suspect one person) to answer my (previous) questions. Under what right have they expropriated the coat of arms? And why do they think they represent the city under that title? The silence was deafening. It remains so.

The finest fridge in the land

Sleuth was staying at his bachelor brother’s house. Sleuth, as with all Manchester Confidential writers, is a food lover. This is what greeted him (see image) when he opened his brother’s fridge. A Mancunian friend on seeing the picture said: ‘Fantastic. Years ago when I was travelling around the country every week, I started a competition with a bachelor colleague as to who had the best bachelor fridge. I think your brother is straight in the top slot.’ Sleuth asked his brother “What will you do with a single tomato and a single mushroom?” “Make a stew,” came the reply. Sleuth promptly went out and bought his brother a single shallot to bulk things up.

Petty football supporter of the week

Here’s the blue letterbox on Liverpool Road in the city centre. It’s a very rare survival from a brief time in the 1930s when airmail was given its own postbox in a very appropriate light blue. The colour is clearly troubling for one football fan, probably giving him sleepless nights, possibly making him violent to his nearest and dearest, so he decided to remedy the situation and to decorate the lovely postbox. What a knob. 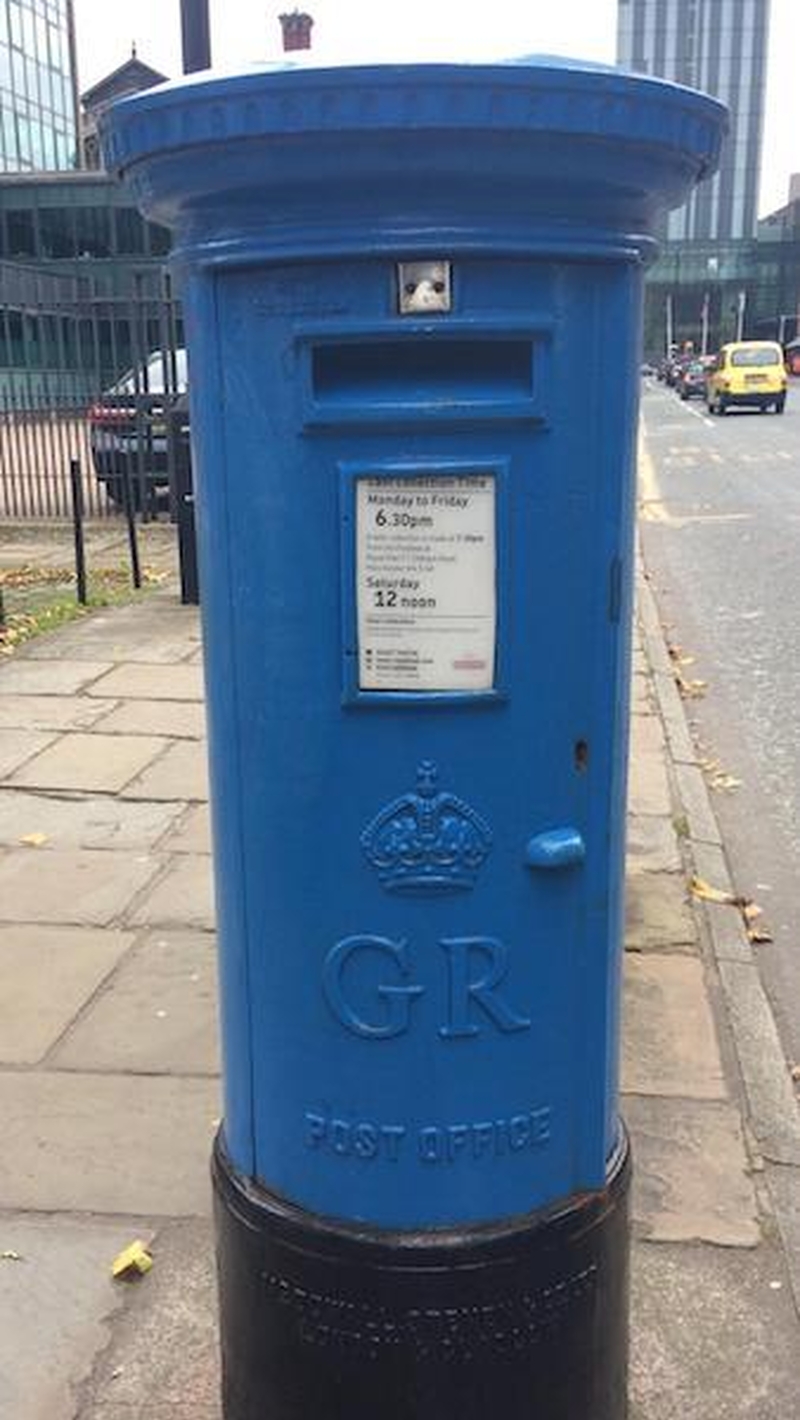 Sleuth's other unnecessary graffiti of the week

Sleuth agrees with Toots. Burnley is very very green. If you ignore the bit about rimjobs... 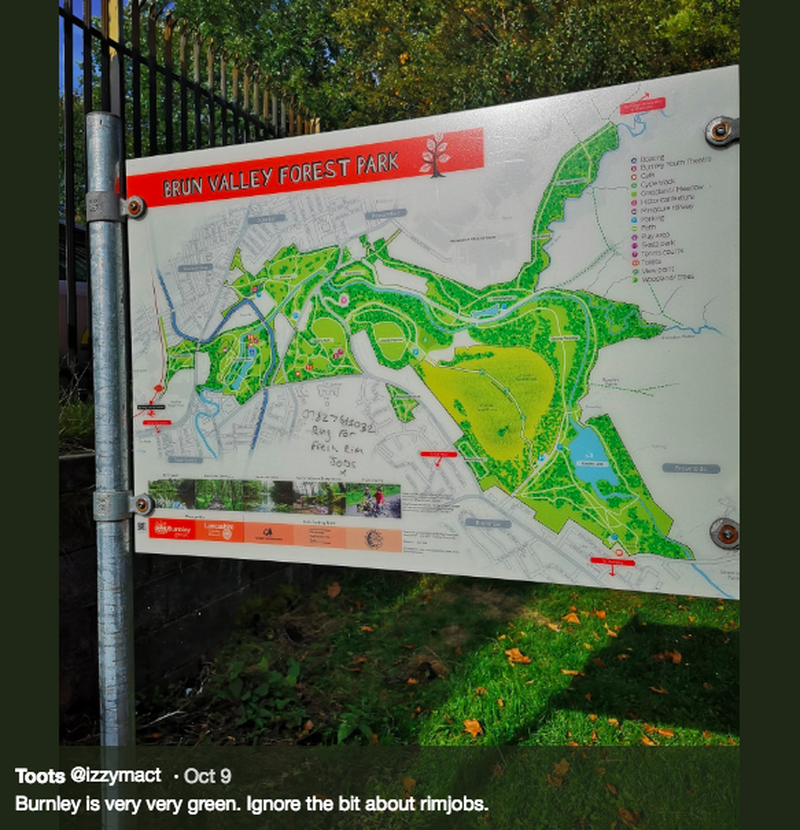 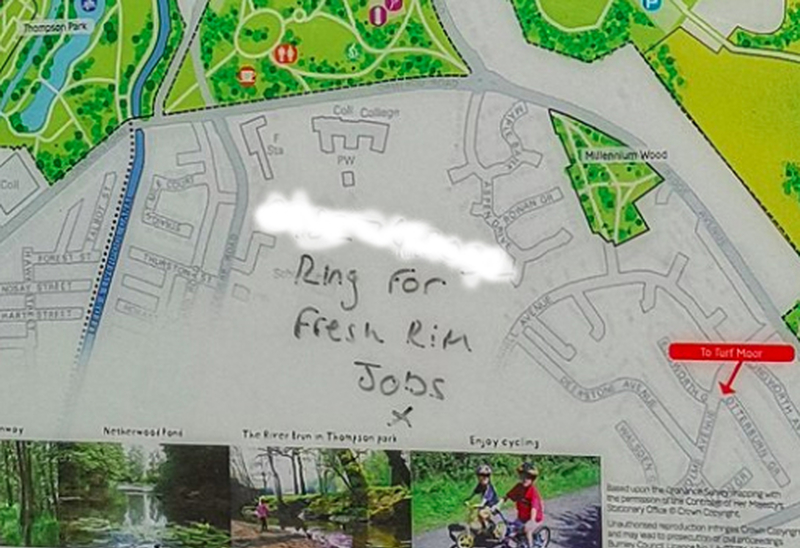