Sleuth - a cocktail too far, polite graffiti and a sign which says 'NI'

Week 20: in which Sleuth considers instant rewards in Salford

Sleuth thinks Manchester's cocktail scene has finally outdone itself. Not only has Sleuth had word this week of 47 new cocktail bars opening in the Northern Quarter, but hears London-based coffee and cocktails outfit, Black Sheep, are planning to open a Manchester outpost at 60 Spring Gardens - directly next door to another new cocktail and coffee bar, Roc n Rye. Elsewhere, the Hilton's Cloud23 bar launched a new range of cocktails this week, one of which comes with a 'doughnut in a bag', another with a 'whole slab of blue cheese'. Last week Sleuth was handed a cocktail which came served with a tiny toy dinosaur. Sleuth thinks once you reach the point where your point of difference is a toy dinosaur or piece of cheese then it's time to reconsider your proposition... anyway, Sleuth's off for a warm ale and pork scratchings in The Rising Sun.

Sleuth's proposition of the week...

Speaking of propositions, Sleuth was walking through Salford this week, when this A-board caught his eye... talk about instant reward scheme.

A Sleuth correspondent went south for a function with a Manchester angle recently. He went to meet three Nicholas Royles. There was Nicholas Royle, the novelist, then there was Nicholas Royle, senior lecturer in creative writing at Manchester Met, and, finally, Nicholas Royle, senior lecturer in behavioural ecology at Exeter University. None of these are related but it gets stranger when you learn the first and second Royales are respectively the author of An English Guide to Birdwatching, partly set in Manchester, and the second Royale has written a short story book Ornithology. These bird books were both launched at the Burgess Foundation in the city this week. Sleuth’s correspondent sent Sleuth a picture of the three of them but didn’t explain who was who in the picture but Sleuth knows exactly who they are. They’re Nicholas Royle.

This graffiti in the Gaslamp bars bogs might have started out as obscene but Sleuth appreciates how it’s been amended to something almost genteel. 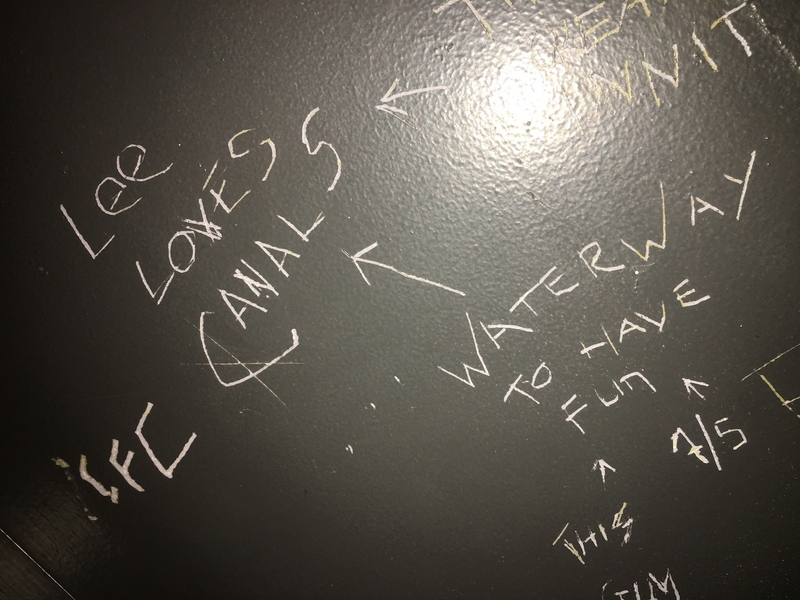 Sleuth’s Oddity Of The Week

Sleuth was on Kings Road in Firswood and saw this sign indicating the entrance to a car wash. It said NI. Sleuth was off to catch the Metrolnik nito town for a meal at the Yang Snig taking a trani from Piccadilly Trani Station to Birmnigham.

Sleuth’s Misplaced Text Of The Week

Adam O’Riordan is a published poet and Academic Director of Manchester Writing School at MMU. He knows that Jonathan Schofield, the Confidential Editor-at-Large, knows a thing or two about the city so he thought he’d text a question about Belle Epoque art in Manchester. The exchange is below. After the final sorry in this O’Riordan found the right number. ‘Fuck knows who I just asked?’ he wrote. Sleuth’s Food Tourism Of The Week

Sleuth was in Umezushi restaurant on Wednesday having a late lunch. It was superb as usual. Suddenly crashing through the door came a very exotically dressed Chinese young gentleman in clothes that wouldn’t have looked out of place on the catwalk at London Fashion Week. He sat at the counter ate three or four dishes and then about 35 minutes later he called an Uber. Sleuth enquired about the young man as he had the air of a regular. “He comes in all the time. He lives in Liverpool,” came the reply. “He gets a taxi here and then gets a taxi back.”

Have you ever considered adoption?
Read Next
● / Travel