'This is what cultural appropriation tastes like' - Habas, reviewed

I’ve become much more proud of my Iranian heritage since I was a teen. Middle Eastern anything wasn’t a thing you shouted about in a small town in the noughties. Then there was that time on holiday when a woman from down south implored me to tell her what I’d "got in me".

Growing up in a Persian house is mainly about dinner. The preparation begins most commonly the night before: rice soaking in a bowl of water next to the sink, herbs spilling out of the fridge, instructions to peel a giant bowl of broad beans in front of the telly.

I’ve been served a few Persian mezze boards over the years, and most white dudes sprinkle pomegranate seeds over a bowl of hummus and call it a day. I’m used to it now, so I roll my eyes when I see the menu. Oh, look, hummus.

Walking into Habas is like having all your senses assaulted at once. A vast cavern of whatsits and thingamabobs, people and chatter and things. Lots of things everywhere.

The interior inspo is Harry Potter World but the food isn’t just plucked from Pinterest. I'm interested to learn that Simon Shaw once had a Shawarma down Edgware Road in London.

A couple of cocktails then. Ushered into The Snug I attempt to straddle a large barrel. Once I'm inelegantly perched on a stool we’re left to our own devices for nearly an hour. The staff are obviously exhausted as they exasperatedly take our drinks order, politely explaining everything that has sold out for the day. The toll on our precious hospitality staff abounds.

"By Any Other Name" is fruity and floral, inspired by a rose garden in Isfahan perhaps, and a tranquil escape from the mayhem - the Shakespearean reference is confusing, but the drink is delightful.

"Transit to Yerevan" is a scotch-based drink with a sage leaf floating on top. I’m told it tastes like Johnny Walker with soda and not much else. But it does help us pass the time as we Google where exactly Yerevan is on the map.

“The menu is basically tapas-y,” we’re told. She’s right, it reads like El Gato with a Persian accent. Like Omid Djalili in every film ever - he doesn’t actually talk like that you know. The resemblance to El Gato Negro is clear. Chargrilled octopus, lamb skewers, tiger prawns, all feature on the menu at El Gato too but I’m keen to try something different.

Habas hummus is hummus. Perfectly fine for a mezze platter (£9.50). Olives and spiced nuts are "picky bits" at best and the baba ganoush has an odd texture - gummy and somehow smooth - where’s the aubergine?

My boyfriend loves the Levant-style pȃté with toasted lavash bread. I think because it reminds him of Christmas at his nan’s - it’s chicken liver pȃté and melba toast.

The roasted red pepper and walnut sauce that accompanies a couple of dishes - including our fried cauliflower (£6) - is a rehash of the romesco sauce found in El Gato, except the tang of walnut is completely vacant.

Prawn and crab fritters (£7) sit in a pleasing puddle of lime and coriander yoghurt. I’m starting to feel more at home now and when a fillet of sea bream arrives on a bed of rice (£12.50) the flavour is familiar. I taste saffron and herbs and breathe a sigh of relief. Squint a bit and you could compare it to the Persian new year dish Sabzi Polow Mahi (herb rice with fish), but the texture of the rice is strange - like the chef is more at home cooking paella.

The only rice ever used in Persian cookery is basmati. It is lovingly washed, soaked - sometimes overnight, boiled, drained and finally steamed to produce light, heavenly grains. The technique is not easy to master. It is served in a great mountain, generous with saffron. Sometimes dried fruit and nuts, sometimes herbs, but always with butter and a glorious crunchy crisp layer on top known as tahdeeg. It really is something special.

I order Habas’ Persian-style rice (£5.50) because apparently, I am a masochist. “Jasmine and black wild rice, caramelised onion, crispy shallots and chilli”. It arrives in a tiny bowl sprinkled with crispy onions - the kind you get on a hotdog at the Odeon - the whole lot swimming in oil. I think this is what cultural appropriation tastes like.

I’m met with bewilderment when I question if the meat is Halal. It isn’t, due to restrictions in the kitchen, I already checked. This is a Middle Eastern restaurant, but not, it seems, designed for a large proportion of Middle Eastern people. We soldier on.

A fresh crunchy slaw (£5.50) is made theme-appropriate with the addition of pomegranate seeds. Stuffed lamb jacket potato skins (£8.50) drizzled with mint yoghurt are lovely.

Beef koftas (£8) are served atop more of that walnut romesco. They have a kick of chilli and a smokiness that can only be achieved on a Josper grill. More like these, please.

Chicken schnitzel (£11) has found its way here too, via Israel I think. Whatever route it took, I’m glad it got here because it’s buttery and crisp, and about the best thing you can do to a chicken breast. Great with the raw slaw, but not astounding.

I want baklava but it’s sold out, and so is the frangipane fig tart. I settle for lemon meringue (£6.50)- I need something to cut through all the butter and oil anyway. My boyfriend is by far the better dessert-picker - his date and orange cake (£6.50) is dreamy with pistachio ice cream. I nibble at it while he’s not looking.

Habas is but a few weeks old, and teething problems are obvious. Middle Eastern cuisine is complex and elegant and simply can’t be shrunken down into tiny bowls and picky plates. Habas has all the right bits, but right now it is a rose-scented tapas restaurant with the feel of a Turkish bazaar. 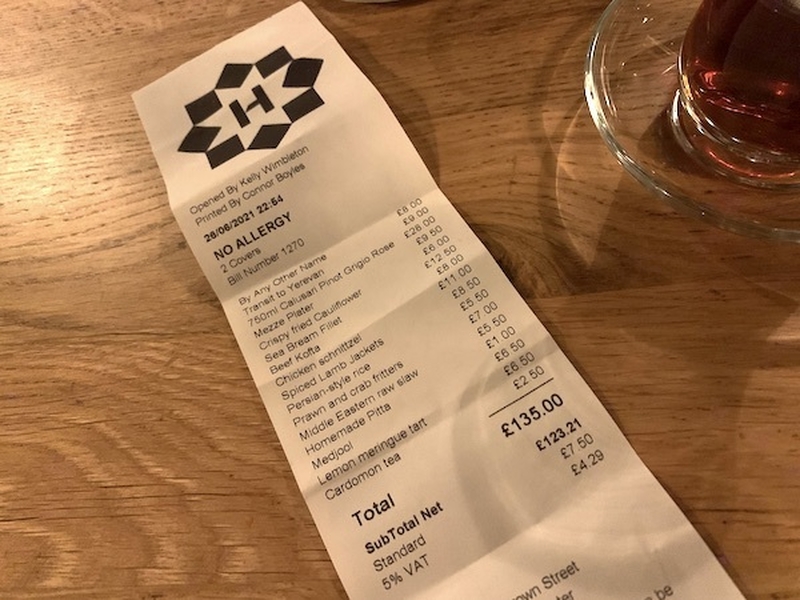