Seven of the best things to eat around Manchester: May 2019

Our food and drink writers seem to have cast their nets a bit further out this month, with the majority of May’s most highly recommended dishes based out of the city centre. They are encouraging you to take advantage of the sunnier days and longer evenings to venture out into suburbs including Stockport, Marple and Lymm.

There you’ll find restaurants serving heavenly pies, cracking crab and dishes that are quite the foodie fairytale. 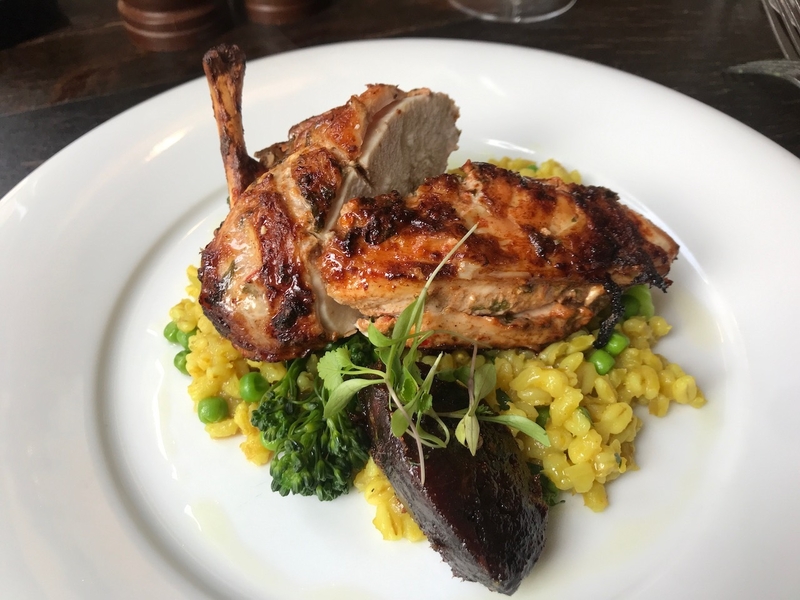 I love Pearl Barley and she loves me. My fair lady comes as part of the tandoori chicken dish in The Rivals restaurant at the Royal Exchange. This fine and handsome establishment, sitting on the side of one of the North West’s more spectacular interiors, is not as appreciated as it should be in the city. Anna Fysh and her team deliver effortlessly good food that scarcely ever fails. If a measure of a good restaurant is good chips then measure The Rivals highly, my friends. Certainly this tandoori chicken dish is a cut above. The chicken is perfectly timed, with lovely flesh that has great texture, the curried skin is superb and then there’s that pearl barley. I could bathe in pearl barley, it is both delicate and filling at the same time, especially as delivered here. This is a lovely piece of foodie work. Jonathan Schofield 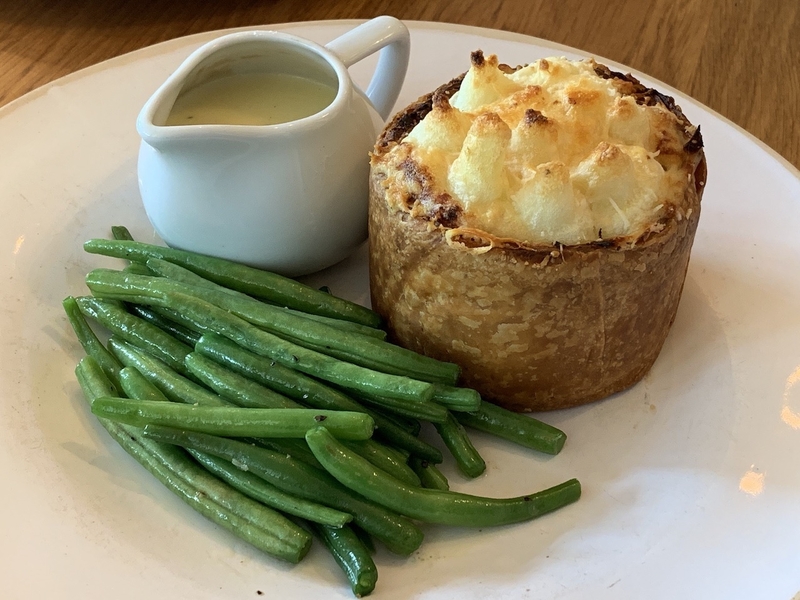 It was supposed to be a carb-free day. I woke up feeling all positive and determined, only to be all too easily undone by the temptation of a proper gastro pub pie. It looked as pretty as a picture with its perfectly piped mashed potato top knots. The hand formed pastry crust gave way with a satisfyingly bold crunch to reveal internal layers of soft cheesy potato. A properly reduced and silky white wine sauce (think more Cordon bleu than Colemans) accompanied it in a little jug along with crunchy fresh green beans. I had to walk round the adjacent Lymm dam ten times to balance the books, but I’m still not sorry. You make your choices and this was worth it. Deanna Thomas Braised pork cups with wild garlic - Where The Light Gets In (Part of the experimental tasting menu, from £50)

Eating at Where The Light Gets In is a bit of an adventure. The experimental menu lets chefs wander where they will, leading you down the crooked paths of their imagination. This particular evening was a forest fairytale, a porky snuffle through the last of the winter stock (including WTLGI’s very own pig making an appearance in practically every course) to the discovery of the tender tips of spring. Which is a fancier way of saying this braised pork, rich and meaty and served in cups made from its own blood (I told you it was an adventure) and served with twists of wild garlic leaves containing pork lung may sound a bit Grimm, but tastes divine. Lucy Tomlinson

Where The Light Gets In, 7 Rostron Brow, Stockport SK1 1JY 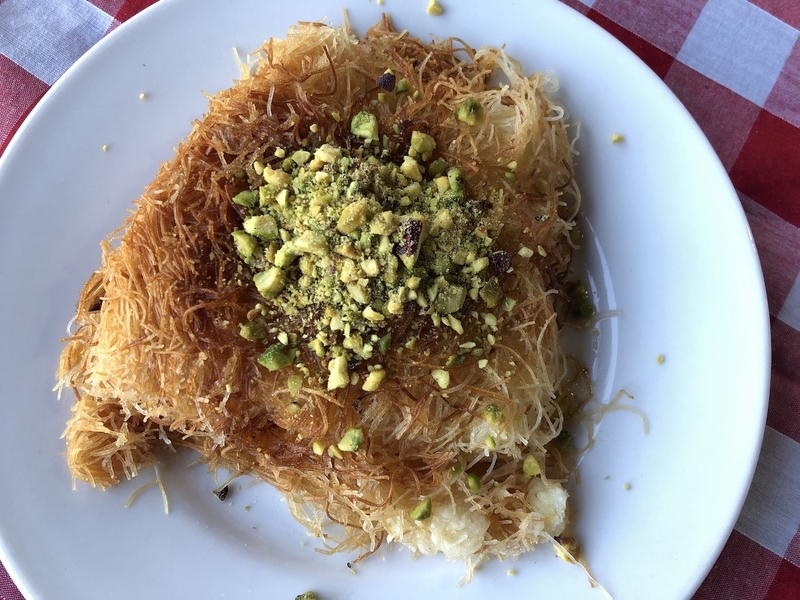 Fans of celebrated Middle Eastern dessert kunafah will recognise its unique profile in this picture. Described by my 5-y-o as ‘hairy pudding’ (before he ate it all), it’s a thrilling combo of crisp, baklava-style strands of filo pastry scattered over salty baked cheese smothered covered in a simple sugar syrup and thickly strewn with crushed pistachios. Variants of this dish are served across this Middle East, in Palestine, Egypt and other regions. However, this flavour-meets-texture combo is £4 a portion at Stretford’s new Syrian restaurant, Samir and it’s a guaranteed winner, no matter how old you are. (Review to follow soon.) Ruth Allan 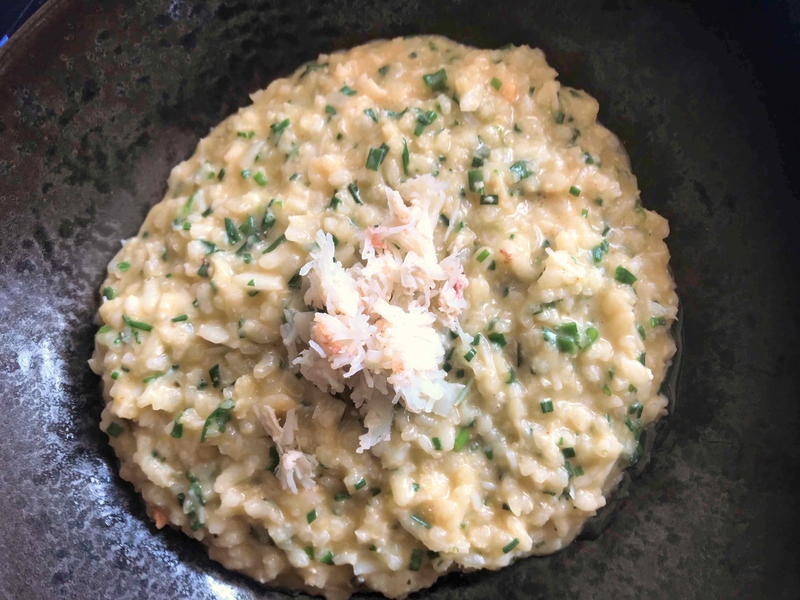 I love watching kids crabbing off a quayside. Just a weighted hand-held line, no hook, with bacon rind as bait. Of course, harbour crabs are small and not edible, so after your catch release them back gingerly. In Whitby there’s a designated harbour fishing area for the youngsters. The locals call it ‘doggering’, which seems fishily inappropriate these days. The real deal that turns up in restaurants is caught all along this rugged coast by the weatherbeaten pros. Better than Craster? Definitely. But it takes skill to create a benchmark risotto out of them. Which happens at arguably the north west’s best seafood restaurant. Chef David Gadd knows his seafood from his salad days at the legendary Sportsman at Seasalter in his native Kent. Freshness is his mantra and this risotto had it in spades, gleaming white meat on top of a large bowl of rice that oozed rich crabby stock. Put those shells to good use and the world is your lobster. Actually, in a risotto crab is infinitely preferable. (Read Neil’s review here) Neil Sowerby 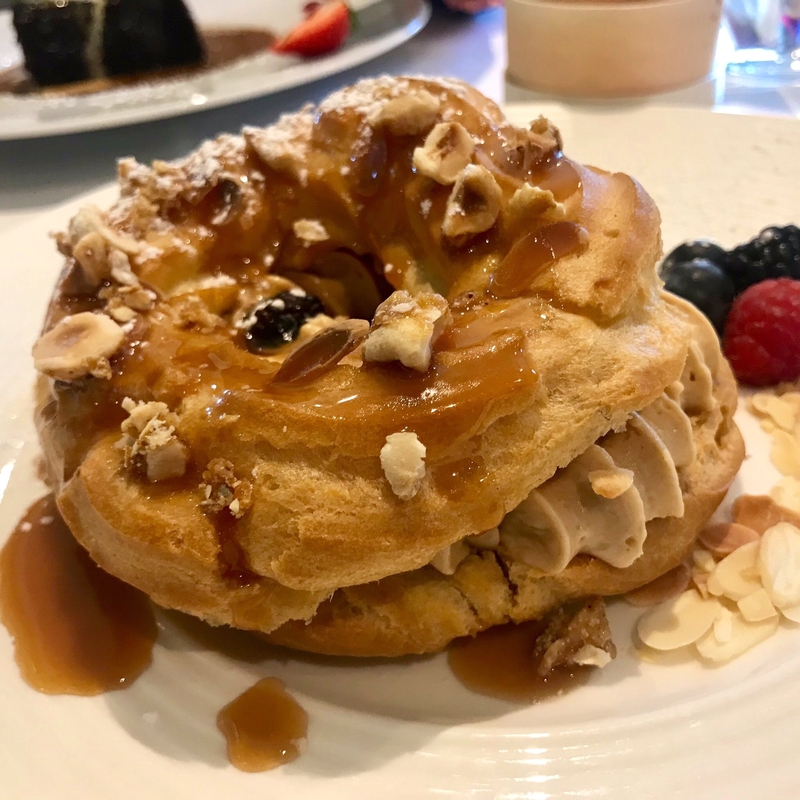 Have you got a full set of Modernist Cuisine on the shelves? Throw the fuckers in the bin. Stop trying to out Rogan Rogan, copy NOMA or invent a brand-new dish to make you the next Heston. You ain’t going to manage it. Give it up mate.

Escoffier wrote a book over a hundred years ago, Classic French Cooking, which has been the best guide ever for proper chefs. Olivier Troalen can cook you virtually any dish in that book. He owns La Bohême in Lymm, been there for decades. Gordo went on a Tuesday lunch last week. It was rammed. At lunchtime. Midweek.It was full of grans, dads, mum’s, daughters and grandsons. Even three hipsters. In the middle of nowhere. Why? Old school French.

Gordo, for pudding, got stuck into a Paris-Brest. That’s a large crispy choux pastry bun the size of a large grapefruit, sliced in half laterally, filled with a thick whipped coffee cream, top put on, molten caramel dribbled over whilst a cheeky elf sprinkled toasted hazelnuts on top.

This was all executed three minutes before arriving. You could smell the pastry tingling a bit. Get a fork, dig out a big mouthful, eat, orgasm. Glorious. Gordo Being of fishy stock myself, I was always going to love the madness of this new dish at Tast – the increasingly impressive Catalonian restaurant on King Street. Both Gordo and Deanna, who know a thing or two about food, reckon the new fine-dining effort on the top floor, Enxaneta (pronounced: En-zan… En-cha… oh f*** knows) is the best the city has produced in some time. “Up there with The French,” says Gordo. Praise indeed. But back down the stairs and back to this fish. Executive chef Paco Perez has a thing for crackers crockery, by all accounts (you should see the octopus), thus their ‘Peix and chips’ – lightly fried seabass with potato puffs and romesco mayo - comes served in this happy little fellow. Ahoy hoy. David Blake