Ah, yes, Saturday night. The streets were thronged. People were enjoying themselves bars, pubs and restaurants were packed. As usual a few people had taken things too far and were steadying themselves against friends, or helpful lamp posts. On Peter Street the queues were so big outside Albert Schloss they could be seen from space.

It amused me that in some places I visited I was even told how to go to the toilet. This was a first

Only that was the first Saturday of July 2019, not this year.

I looked it up in my diary.

That one had been a busy day personally. I’d taken 25 people round Chetham’s medieval buildings and then taken 30 people on a Manchester International Festival tour. Festival Square was thronged, which is where I spent my evening. Mumford & Sons were playing a sold-out Arena. Across the Square you could see that every available space in Caffe Grande Piccolino was filled.

Saturday 4th July 2020 in the city centre was very different, abnormal. The streets were empty by 11pm, had been for more than an hour. In fact, in the Peter Street, Deansgate and Castlefield area it had never really got busy. There was some activity around late afternoon, early evening and some restaurants were half-full which was good because half-full is their legal capacity. The Mercure Hotel in Piccadilly had 44 rooms occupied out of 280. Many hospitality places never opened at all.

It was a very strange Saturday given this was the BIG moment when, after more than 100 days, we could embrace the hospitality industry again. In fact it was remarkably pleasant and comfortable.

The strangeness lay in how the whole experience of visiting restaurants, bars and pubs is now controlled and hemmed in by new protocols: leaving traceable contact details, taking mini health and safety instructions from door staff, skipping past gallons of hand sanitiser to reach perspex screens.

You know things have changed when all the new procedures of simply going for a drink happen at the Moon Under Water, Wetherspoons, on Deansgate. This always feels like the most down-to-earth place yet people were abiding by the rules. I've never seen it so calm.

As we trooped round various bars it amused me that in some places I was even told how to go to the toilet. This was a first. One at time was the rule. I tend to go on my own anyway, I felt like quipping, as I find it a deeply personal process.

The following day I went for a fine lunch in Tampopo. After three months it felt almost unfamiliar, but it felt good too. Happily, for now, the traders are also feeling positive. You can hear in their voices how pleased they are to be back.

David Fox of Tampopo says: “It was like a new restaurant opening, you didn’t want it to be too busy or too quiet. I confess I was a little pessimistic that lots of journos, professional and amateur, would turn up and use camera angles to take pictures showing a lack of social distancing and then social media would light up. That didn’t happen. As for all the safety measures we’d put in people accepted them, were understanding, lovely really, and applied them. For restaurateurs COVID-19 is another risk like all the others in a restaurant, so we prepare properly. It's second nature.”

Fox has another very relevant point to make as regards the UK economy going forward. He was paying his way again, which is good for the country too. “From the money we got from the customers £3700 went to government in VAT. At the same time I’ve taken enough people off furlough this month equivalent to £60,000. And that is just with five and half sites.”

Marcello Distefano at San Carlo is upbeat too, saying: “We traded reasonably well at reduced capacity. Of course, we were a little bit cautious and we wanted to make sure the new ways of service worked. Customers were happy it seemed. Yes, a successful first night back. It was interesting to note how the age range was much younger than usual. There were a lot of couples too.”

For both the message is clear, let’s get the word out that hospitality in the city centre is alive and well and safe. Instead of unregulated drinking in parks and squares, eating and drinking in establishments which are run by people who have a vested interest in keeping things tight and in order is obviously the wiser choice. Venues have toilets as well, which means the bladder flash floods created on streets in parts of Castlefield, Ancoats and elsewhere in hot weather might be avoided.

“It’s all about consumer confidence,” says Distefano. “Hospitality has done a good job with following the guidelines. For our weekday trade though we’ll be very happy when offices start to repopulate. The economy of a city centre is built around hospitality, entertainment, retail and office-based business. We will need that office economy back.”

Marcello Distefano noted how the city centre Saturday was very different from that in the suburbs. People were keeping it local he felt. The Hale San Carlo was busier than the city centre outlet and had a higher turnover than the previous year. Reports from Chorlton and elsewhere support that view. The restrictions on public transport also make it easier to opt for a walk down the road rather than the train or tram into town.

(By the way, given all the effort venues have put in place and the extra costs they have incurred then shame on the 'no-show' guests who booked and then didn't turn up on this first Saturday back).

Occasionally places got it wrong. One Didsbury pub which was enjoying the company of my youngest son and his friends was packed beyond all semblance of social distancing. At one point staff scrambled to draw the curtains and then turned off the lights to try and disguise the fact there were people inside as the police arrived. A fight broke out in one corner. Not good.

It’s the bad behaviour, rare though it is, seen in that pub, which might keep the risk-averse from venturing out. Although it's more likely the extremely good job national and local government, the NHS and 40,000 other over-cautious-by-nature institutions have done in ramming the message of fear down people’s throats that keeps people in. I asked round several friends and acquaintances who regularly eat out and was struck by how adamant some were in saying ‘no way’ to venturing inside a food and drink venue in the near future. They say they are waiting until the R number is almost invisible or even for a vaccine. That might be a long wait.

Let’s hope if the hospitality industry keeps reassuring people they are operating safe and well-managed places then attitudes will change. It's heartening to see the effort being put in. This deserves support. Surely as more and more people enjoy restaurants and bars again, word should spread and more people will feel confident to get off their sofas.

Indeed, from my experience of that first Saturday night back bar hopping and dining this is a very relaxed time for a night out. Great fun. Give it a whirl. It’s like the old normal, in other words it's normal, and nothing to do with the neo-Puritans promoting the falsehood of an dystopian sci-fi movie that is a ‘new normal.’ That sackcloth and ashes approach is bad for the country. As I say, hit the city, give it a whirl. The venues are doing their bit.

'Stick to the chicken, enjoy the interiors' - Mustard Diner, Altrincham reviewed
What you say
Read Next
● / Live / Gig 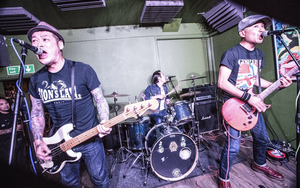 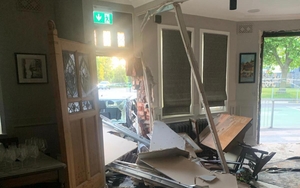 The driver is still in hospital after 'devastating' accident