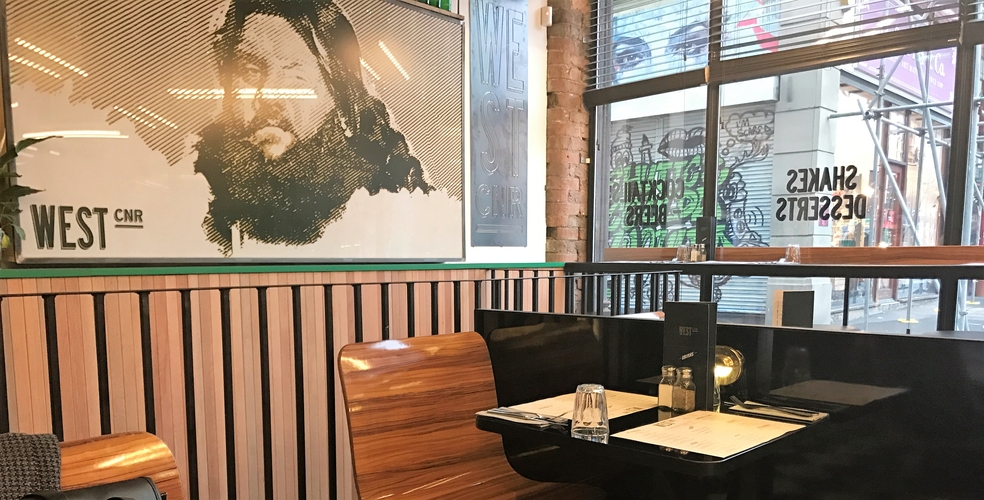 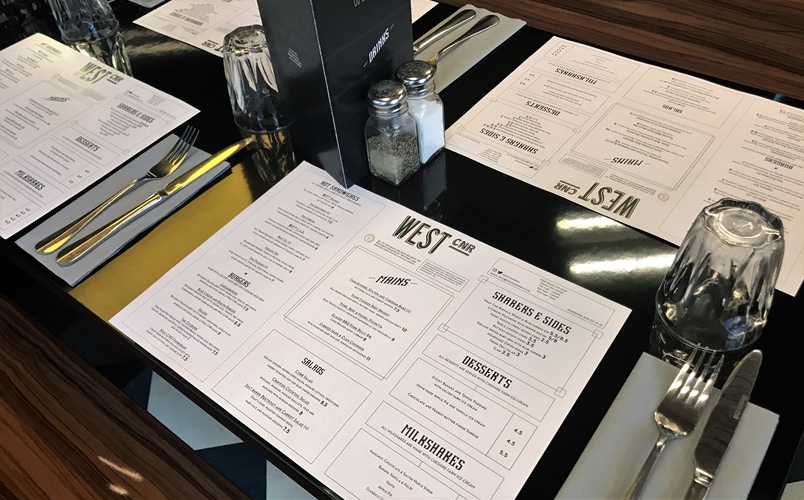 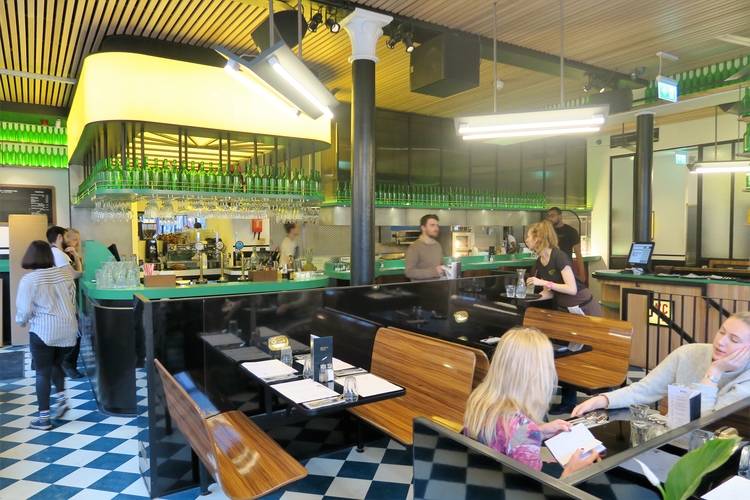 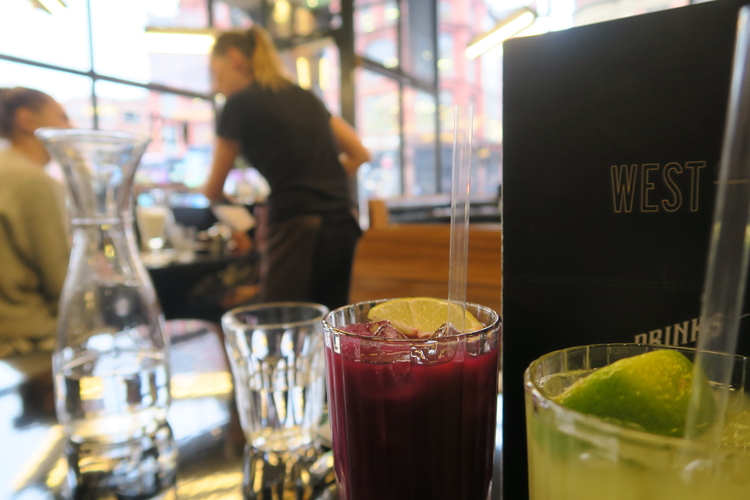 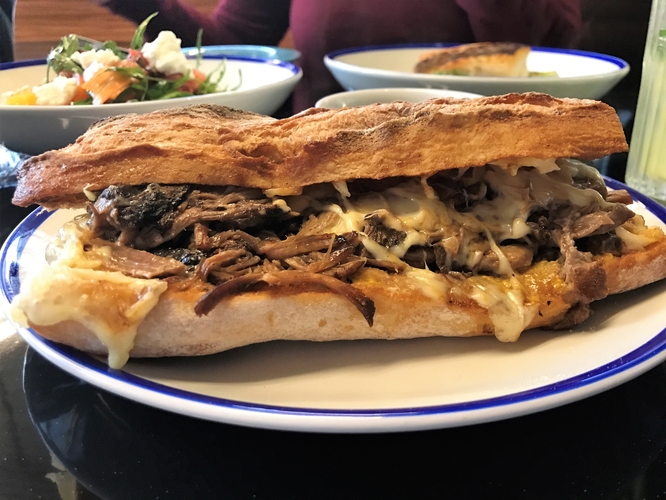 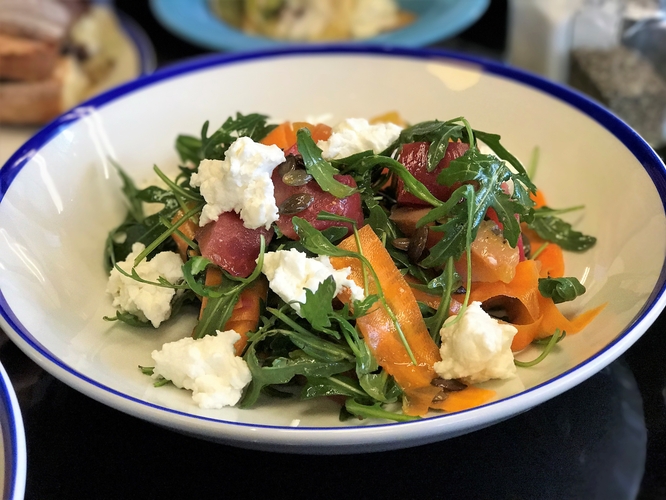 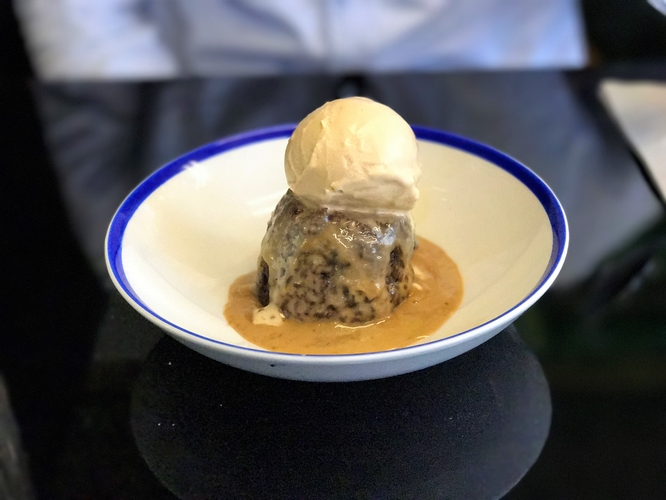 Deanna Thomas finds this all day diner a cut above... ain't that right Haystacks?

A FEW years back, Confidential spawned the acronym Y.A.F.I – Yet Another Fucking Italian, as a result of the sheer number of text book Italian restaurants invading the high street with their bland bologneses and pallid pizzas. Fortunately, the duller ones seem to have faded away over time.

Now we’ve moved into the age of the all day diner; the high concentration of city centre eating places having to adapt to being all things to all people, competing with each other for passing trade for breakfast, lunch, dinner and all things in between. Menus are becoming generic, spattered with global buzzmeals like Thai curry, cous cous and fish and chips all sat next to each other awkwardly, like strangers at a speed (or feed) dating event.

Cue the latest, West Corner, which has usurped the space long-occupied by Koffee Pot on Stevenson Square. It describes itself as ‘a new neighbourhood deli-diner serving food from 7.30am until 12am offering the best in breakfasts, brunches, burgers and everything in between’. All day diners seem to be running out of ways to describe themselves.

As the name suggests, the concept has been heavily influenced by the USA, but not in a try-hard, over the top dirty burger way, but more of a ‘we’ve been on research trips trying to capture the essence of the American diner culture without doing a silly British joke version of it’ way.

It looks like the set of a sitcom where every scene starts with the enthusiastic opener “hey, guys...”; shiny bench seating that’s easy to slide in and out of, as well as bar stools lined up in front of the open kitchen and lining the window for looking out across the backdrop of the square. The monochrome theme is highlighted by touches of lurid emerald green on the counters and in rows of empty bottles above the eye line. Worth a mention is the honking great image of a mysterious bearded and rotund gentleman with a sour look. We nicknamed him Fat Rasputin before further investigation revealed that it was none other than eighties British wrestling icon, Giant Haystacks. Random much?

In the kitchen are Romin Farahani and Dan Barber, both of whom have solid cooking pedigrees. Romin has worked at Hawksmoor, CAU and Jamie's, while Dan has helped expand the food offering at the Odd Bar/Blue Pig empire. The pair even have their own Twitter account: “watch this space we'll be open in a suburb near you very soon”. We're guessing they've been drafted in to launch West Corner before moving onto solo ventures new. You can also find them moonlighting with supperclubs such as the upcoming one at North Star Deli in Chorlton.

Their dishes are all about the detail and a closer look reveals levels of attention which immediately separates West Corner from the more generic high street offerings. They source all their meat from the nearby Butcher’s Quarter and even cure their own bacon with molasses and pepper.

It looks like the set of a sitcom where every scene starts with the enthusiastic opener “hey, guys....”

Take the ubiquitous vegetarian afterthought, beetroot and goats cheese salad (£7.50). Given the Dan and Rom treatment, this standard root vegetable has been elevated in status. The candy variety is salt-baked until transformed into tender rose gold orbs, partnered with soft goat’s curd and ribbons of lightly pickled carrot. Roast pumpkin seeds add texture, mustard dressing adds piquancy. It was no hardship eating this dish in the face of January’s self-imposed dietary misery.

Content munching noises were being issued from the other side of the table as the editor got to grips with one of West Corner’s versions of the legendary classic American sandwich. This is the place to get a Reuben, a Shrooben (the vegetarian version) or a Cubano, but having heard tales of their slow braised brisket, he was all about the French Dip baguette (£8) and its side pot of dipping gravy (well you can take the man out of Grimsby...). This hearty dobber is the sarnie equivalent of a cheeseburger, using brisket and Swiss cheese. Good on them for using the traditional astringent French’s Mustard rather than poncing about with the fancy French stuff.

Curried hake and clam chowder with scorched baby gem and Jerusalem artichokes (£11) sounded great on paper, but needs tweaking. The curried, veg-packed sauce was closer to New Delhi than New England and the Jerusalem artichokes were undercooked. These are my favourite veg and are seldom seen on menus. They should be treated like potatoes; boiled, baked or fried until tender, only crunching when made into crisps.

From ‘Sharers and Sides’, grilled wedge baby gem with blue cheese (£3) turned out to be rather like an unfortunate politician – full of good intentions but slightly flaccid, overwhelmed and oilier than it needed to be.

We were keeping up the appearance of dry January, both politely hiding our hipflasks from each other, so ordered fresh pressed juices (£3.50). They’re arranged in colours. ‘Green’ and ‘Orange’ had sold out, so we went for ‘Purple’ (beetroot, blueberry, celery, cucumber lemon) and ‘Yellow’ (pineapple, lime, coconut, banana), both clean and naturally sweet enough to make us consider returning for cocktails in befuddled February.

There are only three desserts on the menu, all home made. Sticky banana and toffee pudding with Cheshire Farm salted caramel ice cream (£4.50) was on the perfect side of comfort food; warm and cakey rather than wet and claggy.

All in all, we enjoyed our lunchtime trip to West Corner, returning to the office with a favourable glow. Once Dan and Rom have become more familiar with their customers and their dishes, they could be on to a winner.