I'VE been wrong and I've been a fool.

I'm thinking I might spend quite a bit of time getting pissed in there, gesticulating wildly and dropping bon mots like bombs

I've been the big W because I've reviewed the restaurant at HOME too early and broken the Confidential rules. Normally we leave places two weeks or so to settle down, not dive in after five days. But I'll salve that guilt a little because the food and drink here is an extension of what was available at the Cornerhouse and the staff are essentially the same too.

I've been a fool because I repeated 'ad nauseam' that there was no way the spirit of the Cornerhouse bar and restaurant could ever be transferred to HOME. I feared along with all the aesthetes and the academics that the modern building would merely be a conduit for a coffee en route to the cinemas, galleries and theatre.

So it was a slap in the face, a welcome one, when at 7 o'clock on Wednesday the place was packed to the brim with people, heads bent together, chatting about Sartre and Baudelaire (something like that), or holding forth about that meeting between the hapless Miliband and that fool Russell Brand. It had been equally dynamic on Saturday afternoon.

The place has a sixties feel and this suits the customers, a rich blend of young and old. In fact if there were a few more CND t-shirts around you could be back in 1969.

The architects of HOME are Dutch firm Mecanoo. They've stolen the concrete backwall from Manchester's beloved Piccadilly Gardens' 'Berlin Wall' for most of the internal areas. Happily the Manchester Evening News has yet to suggest painting three metre high icons of popular Manc culture on the concrete. The main stairwell for the building cuts through the restaurant and animates it beautifully. The vertical fall of the closely spaced planks could feature easily within the classic 1960s galleries by Roger Bickerdike in the Whitworth Art Gallery.

The lamps, tables and chairs come from design ideas by the brothers who manage HOME's catering, Mark and Lee Hollinworth. Their design ideas were worked up by Greater Manchester company Den and are really very good, especially the wooden elements.

The configuration of bar downstairs, restaurant upstairs is exactly as it was in the Cornerhouse. The only difference being that from the triple height windows instead of a view of the magical movement on Oxford Road there's mainly a view of the remarkably dull building on First Street presently hosting Autotrader.

Not that when there are so many people in the building this is a problem, the energy turns inward, the mood is elevated, you feel like shuffling to the next table and saying something like, "Surely the dialectic of Proustian nostalgia has been subverted by the instant gratification of selfie culture." Well I felt like doing that. That's because I really like the place, I like it a lot, I'm thinking I might spend quite a bit of time getting pissed there, gesticulating wildly and dropping bon mots like bombs.

The menu is big with lots of sharing boards, salads and pizzas. It comes across as fairly standard although the chickpea Scotch egg (£4.75) with curried mayonnaise was anything but. There's no point being a purist about Scotch eggs, they'll take any indiscretions and any indignities, in this case the non-trad chickpea mix was a winner. Get this starter it's colourful, delightful, textured and a complete success.

Mains of Cajun fried chicken (£10.50) and pan fried pollock (£13.75) were a mixed bag. The latter with mash and Morecambe Bay shrimps was a success with capers adding character. Mushed up together it turned into a lovely fish pie. The fried chicken came with fries and was drier than the Sahara. Ok the chicken on the inside was moist but the overly thick spicy crust was a battle. The heavy barbecue sauce didn't help matters and just made the dish seem more unhealthy. A goats cheese salad (£7.95) on a toasted bloomer was a massive improvement and almost as good as the pollock.

A pudd of fruit crumble with creme anglaise (£4.75) rounded things off in a rich and rewarding manner. This was ordered from the world's tiniest dessert menu - see below. The food was washed down with both in-house ales, HOME and Session. Go for the former if you like a fruity flowery ale. The service, by the way, was very good throughout.

By 10pm HOME was quieter than the Cornerhouse would have been at the same time but that's when the location, behind railway arches, hidden by some very strange buildings - why the hell is the multi-storey car park yellow? - will bite. Still, there was a gentle buzz of conversation and because I'd whipped in so sharpish the theatre and galleries weren't fully operational yet.

I have to concede I might have been hasty in my pre-judgments. I hope so because, as I say, I like what I've seen so far. I've been wrong and a fool, dear readers. There's a first for everything. 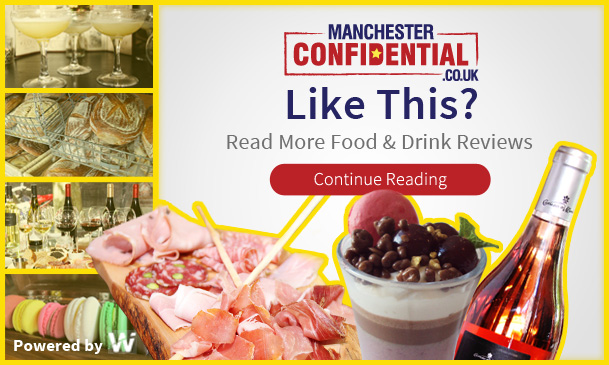