THIS review, like most food reviews, tells you as much about me as it does Ban Di Bul, a Korean restaurant on St Peter’s Square. BDB, as no one calls it, is a buzzy, busy kind of joint, with simple wooden tables, groovy lamp heaters for the traditional barbecue and a screen showing doe-eyed K-pop Lolitas writhing so suggestively that Miley Cyrus might raise an eyebrow.

The problem with being a professional greedy guts means you start to get attracted to the dark side. The outright weird.

As for me, I always thought I was a reasonably cosmopolitan kind of girl, au fait with the more unusual and that having lived in Japan for a while I’d broken out of my western-centric shackles and eaten wildly and well.

Ban Di Bul took that sense of self-satisfaction and kicked it on its arse. Is this is good Korean food or bad Korean food? I can’t even tell you if it is authentic Korean food. Unless there's some kind of inverse ratio between authenticity and the desire to actually put something in your mouth. For truth be told, on my first visit I just did not like the food at Ban Di Bul.

The problem with being a professional greedy guts means you start to get attracted to the dark side. The outright weird. Call it curiosity, call it showing off, but if there is some kind of offal or previously undiscovered flavour combo or interesting use of beans on a menu, I’m there. So my first visit to Ban Di Bul became some sort of elaborate eating dare. Luckily they weren’t serving live octopi, as I believe they do in some parts of Seoul, or I might still be wrestling down a few stray tentacles. 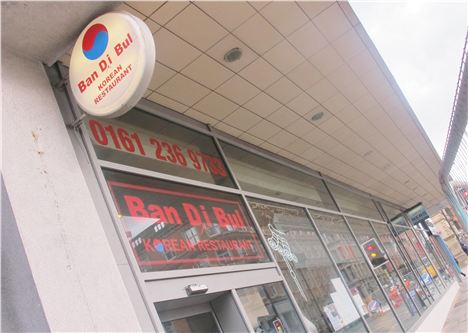 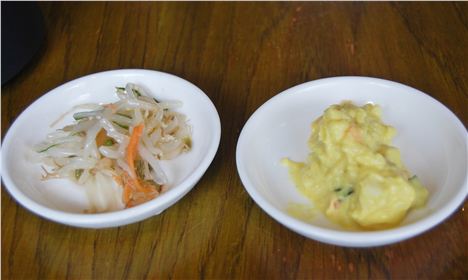 First up was the traditional Kim Chi set (£5.50), a side of pickled cucumber, white radish and cabbage. Fermentation is currently massively fashionable, something to do with enzymes being good for your guts, and kim chi is nothing if not fermented, but I wanted something a bit more testing.

Yukw Hea (raw beef strips with sliced pear and egg yolk £9.90) was much more like it. Raw meat, bah, that’s no challenge to me. Uncooked egg yolk? Salmonella be damned! (Not sure about that scary sliced pear though). Although on paper this sounds like perfect dare food, I was actually least intimated by it out of everything on the menu because it sounds like a variant on the classic steak tartare, which as long as the meat is good, is delicious. Also I love pear and though I had not thought to partner it with raw beef before, perhaps this is the flavour combination Manchester has been waiting for. What I wasn’t expecting was for the meat to be icy cold to the point of frozen. Coated in the muculent egg yolk, slick with sesame oil and sweet pear juice, it was (and I absolutely do not mean this in the 50 Shades sense) like eating a slimy beef popsicle. We have already established that I’m no expert on Korean food, but I’m not convinced this dish is meant to be served frosty. 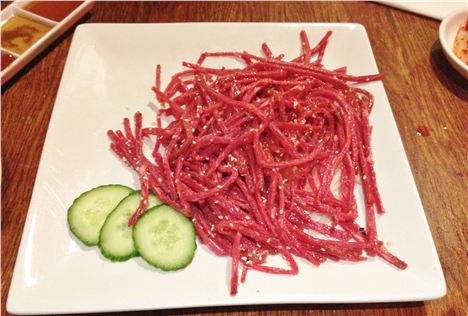 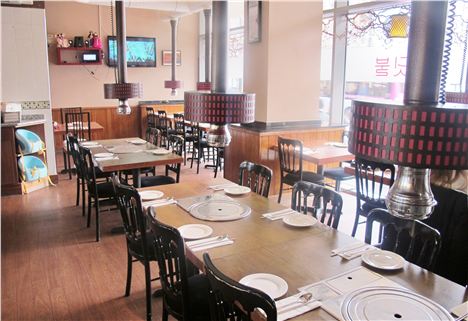 Dak Mo Rae Jim (fried chicken gizzards, £6.90) had an interesting texture, kind of like a plate of fried bicycle tyres, if every piece of tyre came with its own valve. This is meant to be classic drinking food, by which I take it to mean it goes well with something mouth-numbing. As a contrast to all this adventure I ordered play-it-safe sweet and sour pork (£7.90) which was again rather on the repellent side.

The pork tasted curiously old and sweaty, like an old man’s vest. Two barbecue dishes of ox tongue and squid came ready barbecued, kind of draining all the fun out of it (the tongue was bland, the squid came in its own mini-ocean of fish sauce, which might please the fermentation fans but was a bit rich for my blood). A shame, as looking around the other diners seemed to be sharing lots of fantastic-looking dishes.

As for pudding, we went somewhere else for a cocktail. 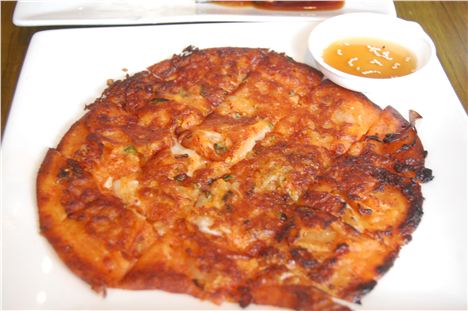 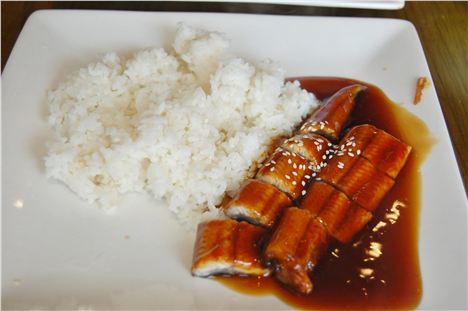 Any normal person would just chalk this up to experience and never eat there again. But being a glutton for punishment as well as just a glutton, I revisited Ban Di Bul not many days later. However, this time I decided just to order something that sounded like I might enjoy it. I started with the Kim Chi Chun (£8.90) which was a large pancake with kim chi combined into the batter (rather than served on top), which put my Nutella-based efforts on Shrove Tuesday rather in the shade. Great spicy, greasy snack food, especially washed down with a bottle of Hite (£3.50).

The Eel Thop Bub (£11.90) came in a simple soy sauce, and was firm, deliciously oily fish, while the Hae Mal Thop Bub (mixed seafood, £8.90, main image) was an attractive if not wildly generous selection of seafood in a tasty sauce served with fluffy rice, a side of miso and for afters some comical fruits. I enjoyed it all.

The lesson then, perhaps not needed by many, but certainly by me – ordering what you fancy (with a small side dish of adventure to liven things up) is a good way to eat.

Ambience: 4/5 packed and buzzing both times, clearly a hit with Korean cuisine aficionados

Lucy recommends: Ordering what you fancy with a small side dish of adventure to liven things up.

Give a miss: Frozen meat

Meat glorious meat: The sharing platter at The Fenwick
What you say
Got an account? Login, to comment/rant.
0 Opinions
Read Next
● / Dinner